GameStop (NYSE:GME) is having its moment. What started out as an arbitrage play designed to take advantage of an overcrowded short trade has now become a hot button topic among the general public, politicians, and celebrities. Being generally construed as a way for the masses to get back at Wall Street in a “David vs. Goliath match,” we believe that late-buying and long-holding retail investors will be the ones hurt instead.

This report will begin by examining the commonly provided rationales for buying or holding GameStop, then discuss why they seem irrational at this point. It will then discuss the danger for traders making their decisions primarily based on WallStreetsBets sentiment, which has become dangerously out of touch with reality. Finally, it will conclude how GameStop relates to capital markets' broader purposes and how the whole saga could further erode public trust in the already looked-down-upon financial system.

As of January 29, 2020, several days into GameStop mania, there are generally two arguments for purchasing the stock. The first is that a “short squeeze” will send stock prices to the roof, generating windfall profits for those lucky enough to be holding shares as those with short positions struggle to close their positions. The second is that, by buying into GameStop, investors are protesting Wall Street corruption, generational inequality, or fighting for social justice. We will debunk both these arguments, starting with the first.

To understand short squeezes, let’s first step back and look at what short selling is. At its essence, short selling is a way for market participants to make money off the downwards price movement of an asset. They do this by borrowing a certain number of shares, then selling those shares on the market for the current price. Then, once the price drops, they repurchase the shares at a lower price and return them to the person they bought them from. The amount a short seller makes is equal to the difference between these two prices, less borrowing costs and transaction fees.

Exhibit I: What is a Short?

A short squeeze occurs when some event triggers unexpected upwards movement in a stock. This drives up prices, causing those who sold short to panic and to close out their shorts by buying shares. However, this increased demand drives up prices even further, causing a self-reinforcing cycle that only ends once people are willing to sell. Short squeezes are indicated by a precipitous drop in the number of sales sold short with a corresponding jump in prices.

Since short sales are only updated monthly by the New York Stock Exchange, it is hard to know definitively whether they are climbing or falling. However, Ortex, a leading financial data provider, has indicated that many short interest indicators have dropped since the beginning of the week. The number of shares on loan, a proxy for short sales, is now only 30.28 million compared to 69.75 million shares outstanding and 46.89 in free float. Ortex’s estimates for overall short positions is at 38 million, down from 71 million on Monday. More crucially, days to cover, a ratio that determines how long it would take all short positions to be covered, is at 1.15, hardly indicative that a potential squeeze is occurring soon. 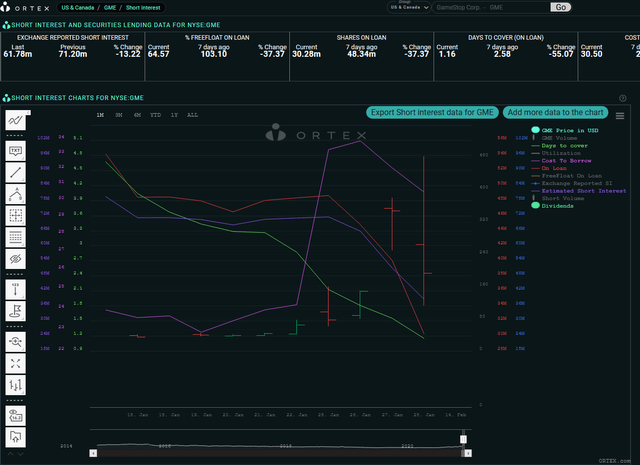 What does this all mean in simpler terms? Well, in short (no puns intended), many short sellers have indeed closed out their positions and look like they have continued to do so in the last several days. The remaining short sellers could easily buy the shares they need to during periods of falling prices (which have occurred often due to the increased volatility). There may be several more short squeezes, but it is improbable they will produce the upside that many Reddit investors (who have price targets over $10,000) are expecting. The technical thesis that originally drove prices up is fading in relevance by the second.

Sticking It to “The Man?”

Another popular argument for buying GameStop is that it hurts Wall Street. Many people are understandably upset at rising levels of inequality, and lots of buyers of GAMESTOP certainly have their fair share of anger and resentment. However, just because they are demonstrating their anger at Wall Street by buying GameStop doesn’t mean that Wall Street firms are the only ones who will get hurt.

While this is undoubtedly true that some hedge funds got hurt in the process, they did not suffer irrecoverable losses. Point 72, the largest firm with a short position, is down roughly 10 to 15%. Melvin Capital, the hated yet iconic firm framed by Redditors as the original enemy, is down 30%. This will undoubtedly be a difficult time for them. On the other hand, it is unlikely that they suffer significant capital outflows. Why? Their investors are institutions and high net worth individuals. They are patient capital, with long return horizons and unlikely to feel threatened by what they perceive as a manageable event.

Now, what makes this argument even loopier is that there are many hedge funds with long positions in GameStop. A quick search on Capital IQ identifies Susquehanna, Senvest, Permit Capital, and Maverick Capital, among others, all with positions in the millions of shares. While Redditors believe they are making “rich Wall Street a******s” pay, this is only partially true. They are actually making some financiers poorer and others richer.

Finally, to understand who will truly be hurt, let’s revisit the technical thesis of “the short squeeze” and try to understand it at a more fundamental level. Essentially, what the original traders of GameStop (and all traders) are betting on is that someone will be willing to buy their shares for more than they did. Because they attributed large short positions to Wall Street firms, they thought the buyers, when the “squeeze” came, would be Wall Streeters (whom many despise). Now, however, even after the “squeeze” has likely occurred, the new buyers are actually fellow Main Streeters. Scrolling through Reddit forums, one can see that some are throwing unemployment benefits, emergency savings, and other important sources of personal finance in to buy GameStop shares at ridiculous prices. If prices fall, these people, who have the least to lose, are going to be those that lose the most. Retail investors buying GameStop shares out of anger are throwing wild punches that will mainly land on each other.

The Toxicity of WallStreetBets

Let’s turn our focus on WallStreetBets, the Reddit community credited with catalyzing this buying frenzy. Before this week, it was an exciting platform which we were fans of, with a mixture of thoughtful trade and investment ideas and less educational (but still entertaining) content. However, after experiencing 3-fold growth in members in less than a week, the forum has transformed into a toxic echo chamber for those invested in GameStop and AMC to reassure themselves that they are “going to the moon” or Mars, or Pluto, or whatever the next destination they select is. While it is easy to see this for oneself through merely scrolling through the forums, let’s look at a specific example that illustrates this point well.

Earlier today, a “Community Moderator” – a high-ranking, long-time user with a large following as well as administrative power – made a post called “A Small Reminder of Some of the Risks Involved.” He describes the importance of knowing counterparty risk and the importance of trading unemotionally. Some responses to this post are:

“DONT CARE GME AMC (AMC) TO THE MOON [rocket emojis in post, but not included in article]” (639 upvotes)

These posts demonstrate how sky-high the irrational exuberance has gotten in the Wall Street Bets pressure chamber. Even well-thought-out posts made by established users of the forum calling for prudence and risk management are being met with complete indifference.

There has been no coordination about when the sell-off will be either. Many forums talk about the importance of holding until the promised day of the short squeeze and maintaining “diamond hands” - but think about the incentives that the Reddit crew has to push this narrative. At this point, it is a 6.5 million person prisoner’s dilemma. They benefit if everyone holds, but as soon as a sufficiently large number of people sell – either because they are taking profits or because the average American likely needs the money for something else, then other speculators have an incentive to sell. The only out case where this does not happen is if, in some unlikely and unprecedented case, GameStop shares become a currency-like object, with no inherent value but a price assigned to it based on demand and a share perception of value. We’ll leave it to investors to think whether that or a bubble is more likely.

At the heart of this saga lies a simple question: What are capital markets? Are they venues for speculation to make a quick buck, or are they a way to facilitate investment from savers to the highest and best uses of capital? While they have always clearly been a mix of the two, many proponents of GameStop’s rise argue that they have been more of the former than the latter for a very long time, but only for the very rich.

We do not deny that trillions of dollars in speculative funds change hands every day. However, is the solution not to clamp down on speculation rather than support and engage in it? Further, an optimistic view would hold that even many of Wall Street’s speculative moves have some rationale. Eventually, with enough traders acting in their own self-interest with their own expectations of price changes, prices come close to reflecting the true value of an asset. The buying and holding that retail traders are doing with GameStop, AMC, Blackberry (BB), and other firms is nothing of the sort. It is emotional and uninformed, with most people having no realistic idea what they are willing to part with their shares for both on the high end and low end.

Now, sometimes people make bad calls. Melvin Capital, Citron, and others certainly did when they entered on an overcrowded trade on GameStop. What we hope to impart on those holding and buying is that they too are in an overcrowded trade. So much so that they are straining the financial plumbing behind the platforms that only very recently allowed them to trade in the first place.

Yet, in the society of the spectacle that we live in, narrative dominates truth. WallStreetBets’ most creative spin up daily theories about market makers’ collusion to bring them down, and, supported by some reputable media outlets looking to drive up advertising revenues, find many willing adherents. When the price of this asset inevitably comes crashing down, “Wall Street” becomes an immediate scapegoat for screwing over the common person out of their GameStop shares. This narrative will be amplified in the media, leaving Americans with even less faith in their world-leading financial system.

Even after the saga is over, the real winners and losers of this saga will remain obfuscated. However, the investors that hold on the longest and buy the stock at its more expensive are almost certain to lose. The validity of the trade’s technical thesis is weakening, and in time it will become clear that Wall Street is playing both sides. While the “hold the line” slogan may have gotten Reddit investors this far, that is not what those who win this trade will do.