If you're over 40, you've lived through at least three epic financial bubbles: junk bonds in the 1980s, tech stocks in the 1990s, and housing in the 2000s. Each was spectacular in its own way, and each threatened to take down the whole financial system when it burst.

But they pale next to what's happening today. Where those past bubbles were sector-specific, which is to say the mania and resulting carnage occurred mostly within one asset class, today's bubble is spread across, well, pretty much everything - hence the term "everything bubble."

When this one pops, there won't be a lot of hiding places.

Way too much money

So, to understand the everything bubble, let's start at the beginning with that influx of outside money. This time, it's coming from the Federal Reserve in what can only be described as the mother of all print runs. M2, a medium-broad measure of the US money supply, has more than tripled so far in this century, and lately, the arc has gone vertical, rising by nearly a third in just the past year.

All this extra money has to go somewhere, so no surprise that it's flowing in lots of different directions. Among the recipients:

The bond and money markets made up of instruments that pay interest are in the aggregate far bigger than the world's stock markets. And they've been booming, with interest rates falling steadily for four straight decades. Since bond prices are the reciprocal of bond yields, the next chart can be read as an epic bull market in bonds, one which has gained steam in the past year as massive currency creation has forced fixed income investors (who have to invest new cash somehow) to buy bonds regardless of what they yield. 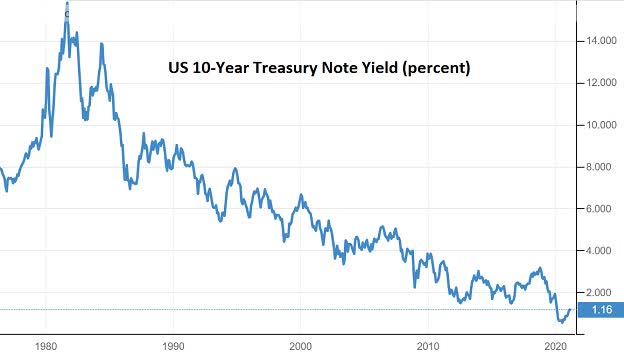 To further illustrate how uniquely dysfunctional the world's bond markets have become, here's a chart going back to the 1300s showing that today's rates aren't just low by modern standards, but are the lowest in human history. Which is another way of saying today's bond bubble dwarfs anything anywhere ever. 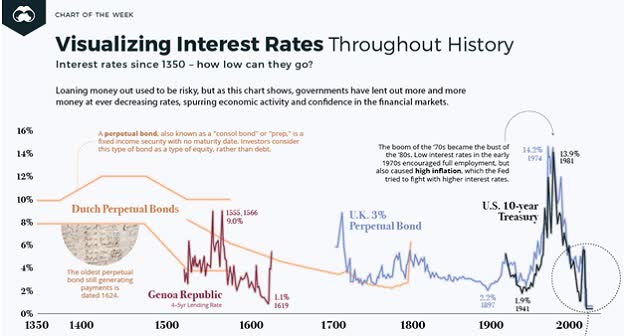 The hopeless position in which pension funds and retirees find themselves is summed up in the following headline: Junk buyers desperate for debt are pressing companies to borrow.

The most obvious bubbles happen in stocks, because "the market" gets top billing in both the financial media and the psyches of investors. And after a long, slow slog out of the depths of the Great Recession, US stocks have in the past couple of years blown through all previous valuation records. That's right, this market is now a bigger bubble than those of 1929 and 1999, and it's still going strong.

Pretty much any popular stock valuation indicator backs up this assertion, but the most dramatic is probably the "Buffet Indicator," so named because legendary investor Warren Buffett uses it to decide how to allocate his billions. It's also easy to understand: chart the aggregate market capitalization of all US stocks against GDP, and there you are. When stocks are low versus GDP, they're underappreciated and undervalued; when high compared to GDP they're overvalued. Today, they're higher than ever before, including just before the last two major bear markets. 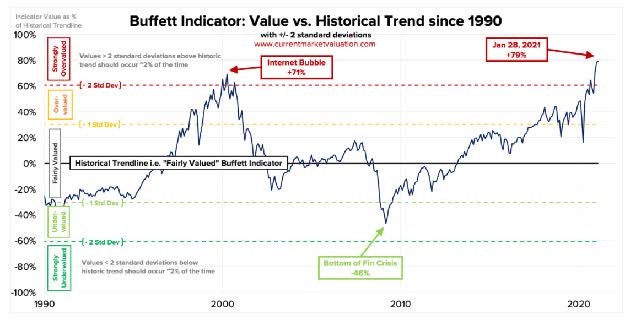 Want some other bubbliscious indicators? Here you go: Right now, more stocks are trading at over 10 times sales than in 1999 at the height of the dot-com bubble. And the number of "zombie" companies, i.e., those that have to borrow to cover their existing debt service and will collapse if cut off from new credit, has never been higher.

This one is a surprise because it was the epicenter of the last bubble, and very seldom does an asset class reinflate so quickly. But hey, all that money has to go somewhere, and houses are the American dream yadda yadda. In the past couple of years, home prices in many places have blown through their 2006 bubble highs and are now accelerating. Note the hockey stick inflection at the far right of the following chart.

Today, you can google "home prices" and get dozens of headlines like these:

Are we trapped in another housing bubble? A rapid rise in home prices has some experts worried

As the hedge fund guy in The Big Short says after visiting Florida, "Yep, it's a bubble."

Cryptos weren't around for any previous bubbles so their role in what's coming isn't yet knowable. What is clear is that they're behaving like dot-com stocks in the 1990s, with bitcoin (think Amazon.com (AMZN)) soaring parabolically if erratically… 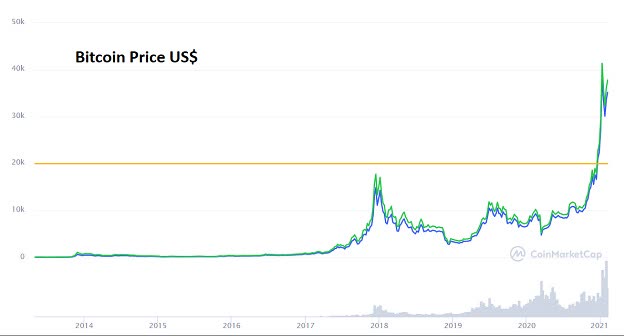 … and hundreds of lesser coins with a wide variety of future prospects (think eBay (EBAY), AOL, Pets.com) also soaring on a torrent of fiat currency rocket fuel. Here's the second most valuable crypto: 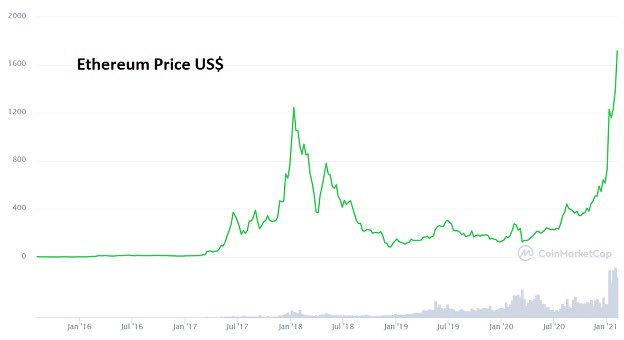 The conclusion: Even if cryptos end up dominating some future monetary system, their parabolic arcs in the here and now scream "bubble!"

As for moral hazard …

A true bubble is more than just soaring prices. It also features people behaving in ways that with hindsight will seem totally incomprehensible. Think previous bubbles' daytraders and home flippers making fortunes doing things that experts normally find difficult. And recall the huge amounts of money that once poured into things that in normal times would have little appeal to rational investors. Collateralized Debt Obligations (bonds that were somehow comprised of subprime mortgages and AAA-rated) and mutual funds holding dot-com stocks with no earnings - and no realistic prospect thereof - are prominent examples from the recent past.

Today's world offers some even better examples of moral hazard, including:

These are companies that go public without assets or earnings or any of the other impedimenta typical of IPOs. You give them your money and they'll figure out how to put it to work. Why? Because they're geniuses who claim to have made fortunes in the past few years, and you apparently have way too much cash and no productive uses for it. There are even SPAC ETFs that offer exposure to the whole "sector." 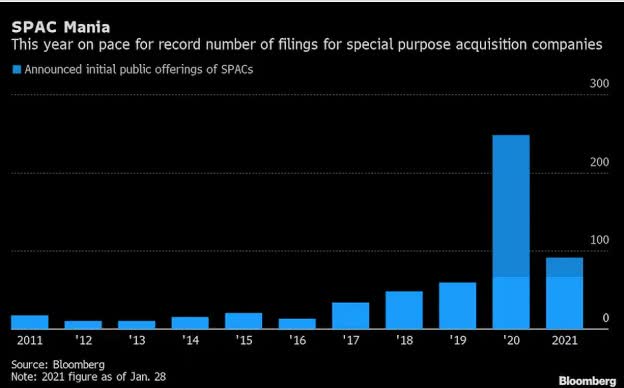 In typical bubbles, a handful of money managers roll the dice on the bubble asset and win big. Bigger than big. They make ridiculous amounts of money and are hailed as geniuses and courted by reporters and politicians hoping to bask in their reflected glory. Then, of course, the bubble pops and the geniuses crash and burn along with their favorite speculations.

The everything bubble's supernova is the ARK Innovation ETF (ARKK), run by hitherto obscure (and now household name) Cathie Wood. Her "innovation"? She loaded up on Tesla (TSLA) stock right before it embarked on an epic (and inexplicable) 1000% run that made it more valuable than the ten biggest carmakers on the planet combined. 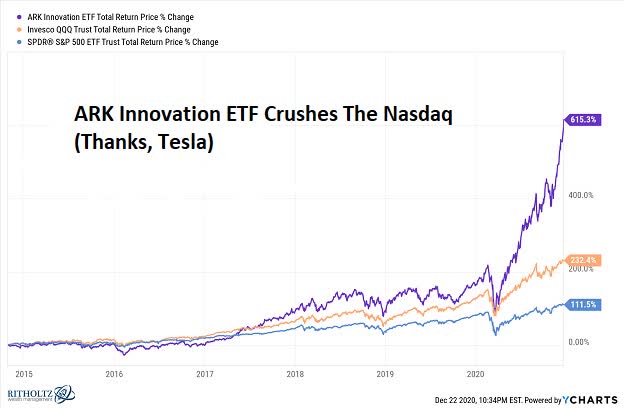 Wood is still long and strong Tesla in addition to many other prominent bubble assets and will apparently use the torrent of money now pouring into her fund to roll the dice on an even bigger scale. 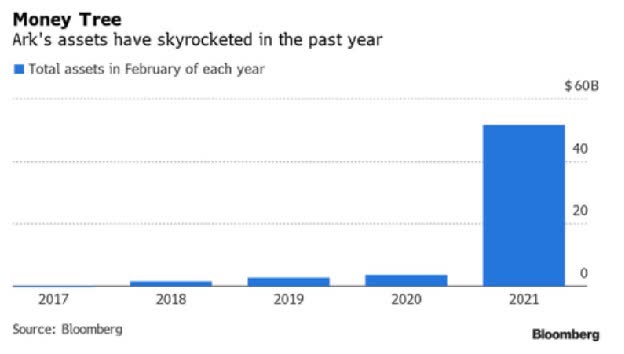 This list wouldn't be complete without the Reddit/Robinhood traders who are having a ball chasing a wide variety of stocks straight up while tormenting hedge funds on the other side of those trades.

So, here we are, with all the typical bubble pathologies on full display, but for multiple bubbles rather than just one. And a government determined to levitate all those bubbles simultaneously, even at the expense of rising inflation.

What happens when one of these bubbles bursts? The others burst too, in short order. You can't have an epic, systemically dangerous bust in one big sector and placid good times in all the others. Markets - now more interconnected than ever - simply don't work that way.

Meanwhile, the actions necessary to fix some of these bubbles are mutually exclusive. A stock market or housing bust requires much lower interest rates and bigger government deficits, while a currency crisis brought on by rising inflation requires higher interest rates and government spending cuts. Let everything blow up at once and there will be literally no fixing it. And the "everything bubble" will become the "everything bust."

John Rubino
2.73K Followers
John Rubino manages the financial website DollarCollapse.com. He is the co-author, with GoldMoney’s James Turk, of The Money Bubble (DollarCollapse Press, 2014) and The Collapse of the Dollar and How to Profit From It (Doubleday, 2007), and author of Clean Money: Picking Winners in the Green-Tech Boom (Wiley, 2008), How to Profit from the Coming Real Estate Bust (Rodale, 2003) and Main Street, Not Wall Street (Morrow, 1998). After earning a Finance MBA from New York University, he spent the 1980s on Wall Street, as a money market trader, equity analyst and junk bond analyst. During the 1990s he was a featured columnist with TheStreet.com and a frequent contributor to Individual Investor, Online Investor, and Consumers Digest, among many other publications. He currently writes for CFA Magazine.
Follow
1047 Comments