Let's start this week's commentary with a simple statement: the stock market is a sideshow. If you want to try and understand what market trends are reflecting about the larger economic and geopolitical story, then you want to be paying attention to what is happening with commodities prices and bond yields. The S&P 500 and, even more so, the tech-heavy Nasdaq are in their own little sandbox where pockets of insanity pop in and out of existence against a canvas backdrop of passive fund flows and mindless algorithmic price triggers. Bond yields, on the other hand, tell us a great deal about real economic matters like inflationary expectations. So do commodity prices, and that will be our focus this week.

Commodities come in a variety of flavors, but many of them share a common function: they are the raw materials that make up the initial stages of economic production processes, including manufactured goods, food products and the like. Here is a chart showing recent price trends in four such raw inputs: copper, crude oil, corn and nickel. 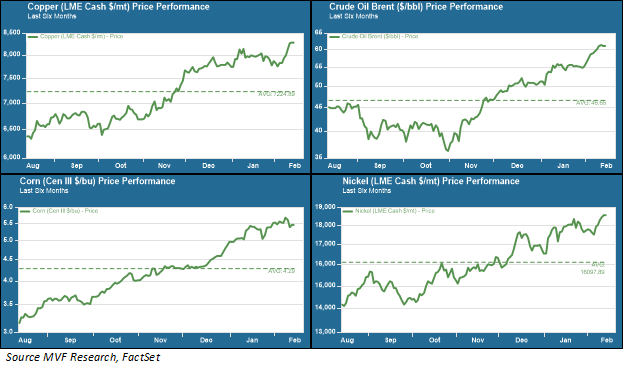 Not shown in the chart above are precious metals commodities like gold and silver, because they are traditionally less correlated with economic growth cycles and (particularly in the case of gold and platinum) seen more as a defensive hedge for portfolio protection against risk assets (their effectiveness in that role has been rather spotty in the past, which is why we typically do not see them as necessary strategic asset classes for our allocation models).

As the chart shows, these commodities - representative of energy, industrial metals and agriculture - have been steadily rising since last fall. Think of this trend in commodities as another side to the activity in bond markets that has been a topic of several of our recent commentaries; namely expectations for an increase in economic activity, and a commensurate rise in consumer prices, in the second half of this year.

To recap the essential features of this story: global demand will rise significantly as more populations achieve something close to herd immunity from the coronavirus. A flood of new money coming into the economy from pandemic relief programs will put a strong tailwind behind the organic demand. Meanwhile, supply chains will still be adjusting from last year's disruptions and trying to catch up to demand. All these aspects of the story point in the same direction of increased prices. So, if you are a commodity investor, it makes sense to be taking a position sooner rather than later.

Supercycle In Search of Catalyst

The steady run-up in commodity prices has some observers talking about a new supercycle. Such talk may be rather premature. To understand why, let's think about the last commodities supercycle, which ran for the better part the first decade of this century. The chart below shows the price trend for copper, perhaps the most representative industrial commodity, over that time period and through to the present day. 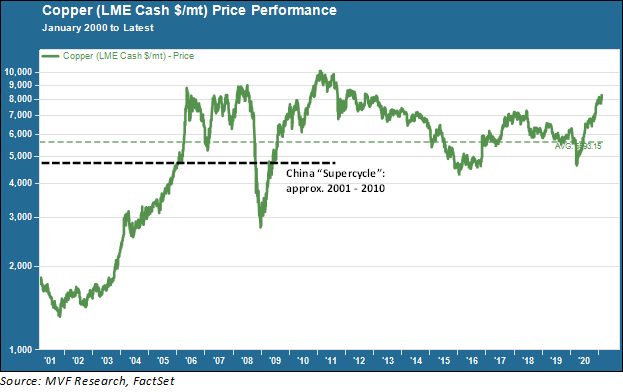 Industrial commodities had a long run over multiple economic cycles. The collapse in prices following the market crash of 2008 was brief, and it took only a year or so for prices to recover and then surpass their previous highs. That's what is meant by the phrase "supercycle" to distinguish it from shorter cyclical fluctuations.

But the 2001-10 supercycle had a single overriding catalyst: the rise of China from economic also-ran to the second largest economy in the world. During this period, China became the world's largest consumer of just about any industrial commodity you could think of, as its growth was powered by massive investment in manufacturing and physical infrastructure build-out. Absent China, the supercycle would not have happened.

That's why we think talk of a supercycle today is premature. China's growth trend has matured, and the growth taking place now is more balanced towards services and consumer activity, with less of the raw physical power of its earlier supercharged phase. So, what would be a similar catalyst for another sustained period of growth? This question brings us right back to the theme of many of our recent commentaries; namely, inflation.

If you go back even further in time, the last commodities supercycle we saw before the China cycle of the 2000s was in the 1970s. That cycle was indeed due to the prolonged inflationary trend of that period. As we have said many times in recent weeks, we believe that a more likely path for inflation will be a brief spike in the later months of 2021 (possibly extending into the early part of next year) followed by a stabilization and reversion to recent (pre-pandemic) historical trends. That would imply that the current run-up in commodities would be more likely to run its course well before a supercycle trend would imply.

Of course, there is a chance for things to turn out differently - and that is why, as we said at the beginning of this piece, we are paying more serious attention to current activity in the bond and commodities markets than we are to the daily carnival of silliness that is the present state of the stock market.