This is a follow-up article.

In mid-August 2020, I scaled out of Apple (NASDAQ:AAPL) stock and used the proceeds to purchase Alphabet (NASDAQ:GOOGL)(NASDAQ:GOOG). 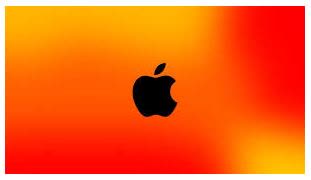 Meanwhile, I took the AAPL proceeds and doubled my position in Alphabet. 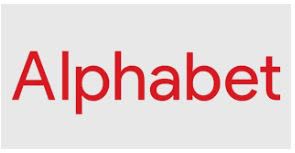 I purchased shares between the middle of August and the first few days of October. The average bid price on the incremental position was $1503.

Now I will be the first to tell you six months doesn't prove a thesis definitively. As an investor (versus a trader or speculator), I generally hold a stock for at least 18 months. Through experience, I've found this to be the minimum amount of time I like to hold a stock in order to give an original investment thesis the "chance to be right.” Exceptions are cases whereby the original investment thesis is busted. If that happens, I don't wait and hope for things to change. I get out. Alternatively, if a stock runs up much too far, too fast, I may also exit a position early.

Nonetheless, the six-month return delta between AAPL and GOOGL is so stark it seems a reasonable call out.

Since I sold the balance of my AAPL stock, the price improved from split-adjusted $124.99 to $135.40. That's an 8.3% increase in six months. Including two dividend payments, the total return would have been 8.6 percent. That's not bad.

The upshot isn't to point out making a good six-month call. It's to evaluate the decision-making process behind the call, then plot a path forward.

In August 2020, my contention was AAPL prices got way ahead of the fundamentals.

Shares were trading at over 35x earnings, and 26x cash flow.

Now, with the benefit of two additional quarters behind us, we find the full-year EPS came in at $3.26 and cash flow at $4.60 per share: earnings results were light, and cash flow recorded a modest beat.

Adding in an additional set of quarterly results (for the period ending 12/31/20), shares now trade at 37x trailing earnings, and 27x cash flow.

The long-term P/E and P/OCF multiples have been ~16x and 12x, respectively.

Therefore, while registering an 8.6% total return since mid-August, AAPL shares now appear even MORE overvalued than before. 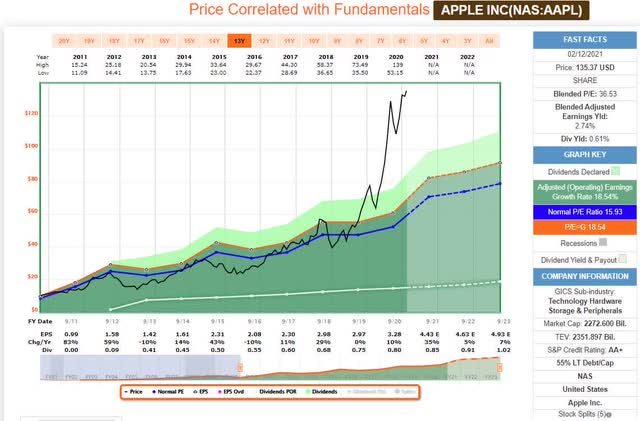 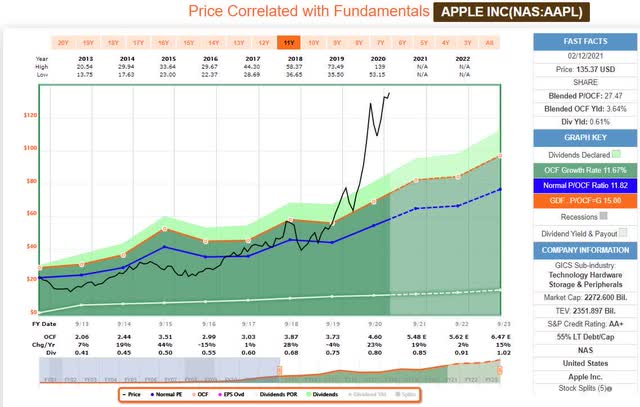 For a good growth stock, it's customary to look at forward EPS. Based upon current Street estimates, Apple Inc. is trading at 30x this years' EPS, and 25x cash flow. These multiples are still far above the long-term average.

Alphabet Stock Is No Longer A Bargain

Meanwhile, back in August 2020, analysts were setting up Alphabet investors for an off year. The COVID-related economic slowdown certainly affected the business: primarily Google advertising revenue.

Alphabet met or exceeded 2Q and first-half 2020 numbers; however, revenue, margins, and operating income were contracting.

Back in August, analysts called for full-year (ending December 31) EPS and cash flow per share to be $44.61 and $78.02, respectively. The Street expected declining year-over-year figures.

GOOGL shares were trading at 33x EPS, and under 20x operating cash flow. The long-term trimmed averages were 28x and 22x. The earnings multiple indicated approximate Fair Value, while the shares were inexpensive on cash flow.

But the real story was valuation.

Long-term P/E and P/OCF multiples are 26x and 19x, respectively.

Another pair of F.A.S.T. Graphs paint the picture: 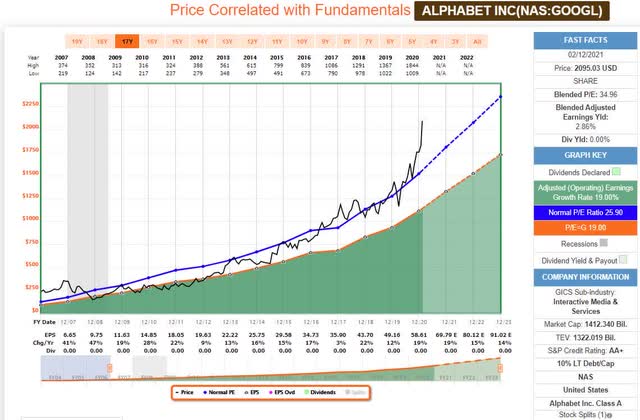 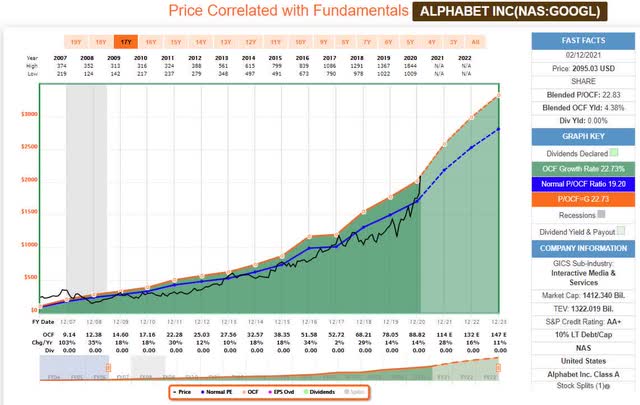 On a forward basis, GOOGL is trading at 30x EPS and 18x operating cash flow.

AAPL stock was heavily overvalued in August 2020. Based upon trailing twelve-month multiples, the shares remain overvalued today. Looking ahead, the most recent 2021 earnings and cash flow growth forecasts have risen significantly, while 2022 estimates remained about the same. On a forward basis, AAPL stock trades at 30x EPS and 25x cash flow. That's still far above historical averages.

GOOGL stock was undervalued on cash flow in August 2020. It's a mixed bag now; Alphabet isn't in the bargain bin. Based upon TTM multiples, shares are trading above Fair Value today. Looking ahead, 2021 and 2022 EPS estimates have fallen since August. The 2021 cash flow forecast is higher, and the 2022 forecast is a bit lower. To be fair, I believe current EPS forecasts have decreased due to the company crushing estimates over the past two quarters. Based upon 2021 estimates, GOOGL stock is trading at 30x earnings and 18x operating cash flow. That's a little high on EPS, and about on par for OCF.

Investors make forward decisions upon where a company's earnings and cash flow are going; not where they've been. We've already looked at forward P/E and P/CF. Now, let's look at PEG ratios. When evaluating a growth stock, the PEG ratio is often one of the most helpful signals. It's determined by taking the current P/E and dividing it by the forward growth rate. When determining the forward growth rate, I like to look out two years. While some PEG ratios look up to five years out, I believe this is too speculative. The Street has a hard enough time forecasting EPS just two years out. Five years out? It's just a guesstimate.

A PEG under 1.0x indicates good value. If the PEG is between 1.0x and 2.0x, it suggests fair value. When the PEG is greater than 2.0x, a stock may be considered overvalued.

Over the next two years, Alphabet is projected to grow earnings by 17 percent a year. The PEG2 ratio is 2.0x. That's not a bargain, either.

Based upon my knowledge of the business, I place more emphasis upon Alphabet's ability to generate operating cash than net income; however, that's still not enough to get me overly excited about buying GOOGL stock at $2095 a share.

With the benefit of hindsight, moving money out of Apple and into Alphabet stock turned out well. Over the past six months, Apple stock advanced 8.6% while Alphabet broke out with a 39% gain. Back in August 2020, the decision to sell one and buy the other was based upon valuation and probabilities. These two companies are two of the best-run businesses on the planet. AAPL and GOOGL are great stocks to own: but not at any price. Valuation matters.

Apple Inc.'s shares are still too rich for me. I'm not excited unless AAPL drops to less than $84. Today, it's not in the right zip code.

Alphabet was a solid buyback in late summer 2020. Analysts were fretting about COVID-19 ad contraction; even if correct, the phenomenon was likely to be transient versus terminal. The stock appeared to offer far better value than Apple. Nonetheless, after a big runup, GOOGL isn't a bargain pick. After a six-month 39% run, it's time to take a little off the table, wait for lower prices, then seek to repurchase the shares. I lopped an eighth of my position off at $2090, and plan to sell another eighth if the stock breaks $2100. GOOGL starts looking attractive again ~$1700 a share.

Please do your own careful due diligence before making any investment decision. This article isn't a recommendation to buy or sell any stock. Good luck with all your 2021 investments.

Disclosure: I am/we are long GOOGL. I wrote this article myself, and it expresses my own opinions. I am not receiving compensation for it (other than from Seeking Alpha). I have no business relationship with any company whose stock is mentioned in this article.