Following this recent sell-off in gold amid its healthy consolidation period over the past six months, sentiment has once again turned extremely bearish. For those bullish precious metals and the miners, you would do well to snap up this opportunity in earnest.

Firstly, if we look at the gold miners bullish percent index ($BPGDM), this has fallen to a level indicative of excellent buying opportunities over the past decade, particularly during the bull run of 2009-2012. 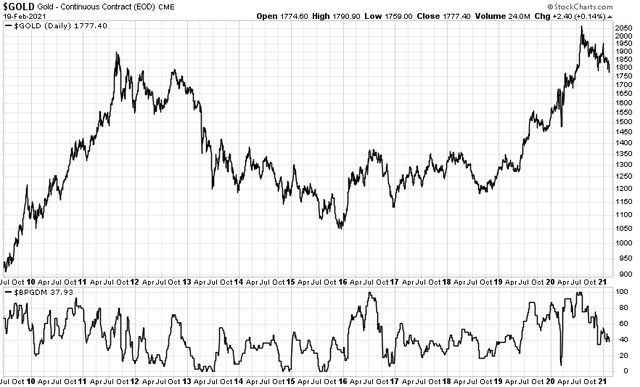 Turning to money manager positioning (i.e. hedge funds and CTAs) in the futures market (blue line below), this too has dropped to its lowest point since early 2019. Money managers have an uncanny ability to be long at the tops and not-so-long at the bottoms. Again, this is very constructive from a sentiment perspective. 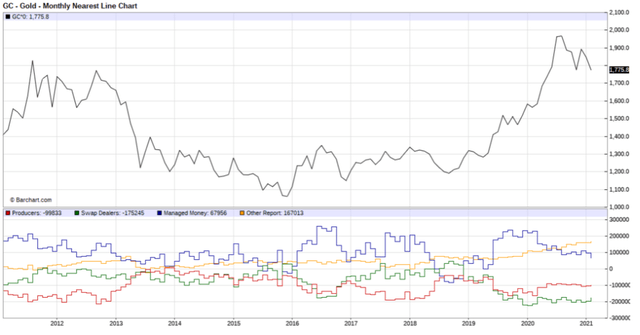 As noted by Fred Hickey on Twitter this week, other sentiment indicators for precious metals in the form of the Daily Sentiment Index ((DSI)) and Hulbert Gold Newsletter Sentiment Index (HGNSI) are all looking as bearish as we saw in the late November sell-off.

Turning to the technicals, there is plenty of long-term support at the current $1,750-$1,800 levels.

Shorter-term, we are still consolidating but there is decent support at $1,750. A breakdown to the lower trend line is of course a possibility, but in my eyes would be nothing more than another excellent opportunity to accumulate at even lower prices. 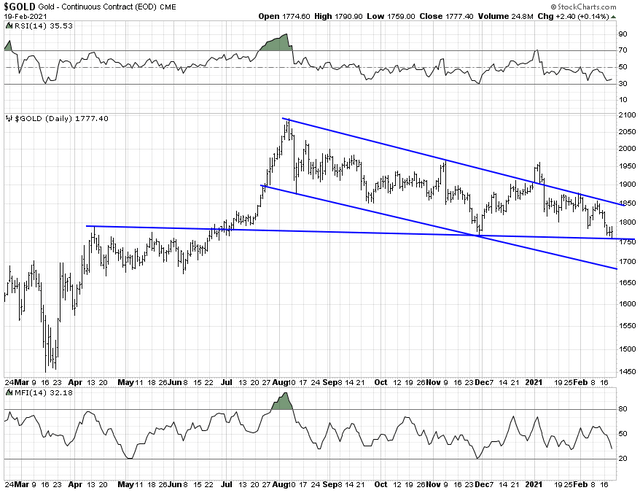 The culprit of this continued correction in gold after a stellar first half of 2020 has been rising real rates. Particularly since November, we have seen nominal rates on the long end of the curve rocket upwards. As inflation is yet to sufficiently follow suit, when nominal yields rise faster than inflation, real yields will rise. Real yields and gold have the perfect inverse correlation (but of course you all knew that already).

Given the huge push to fiscal support going forward and the ever expanding federal deficit, we all know the bullish case for precious metals. The upside for yields relative to the upside in inflation is now clearly skewed towards inflation. The move to fiscal dominance likely means an eventual move toward outright yield curve control or some other form of financial repression in order to keep real yields negative to allow the government to fund said deficit. Negative real yields are gold's best friend and likely do not pose as much of a threat going forward as in the past 12 months.

I have detailed my long-term fundamental bullish case for gold several times in the past. My outlook hasn’t changed. So, if you are like me and bullish on precious metals, then this would be an excellent time to add to your core holdings, particularly so for the miners and for silver.

Both ratios when compared to gold suggest plenty of upside is ahead. 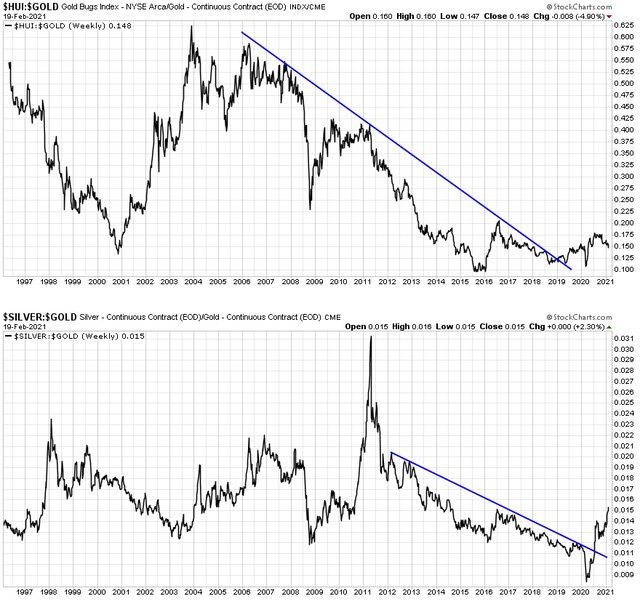 Whilst traders of a more tactical nature may wish to wait until we see a sustained breakout above the downward channel we find ourselves in at present, long-term holders should see this as an excellent opportunity to add to their core precious metal holdings or favourite miners. For me, I will be adding to my core exposure before getting even tactically longer when we do see such a bullish breakout and confirmation of uptrend.

If you enjoyed what you are reading, I encourage you to follow me on Seeking Alpha. Your support is greatly appreciated.

Christopher Yates, CFA
745 Followers
Editor and publisher of AcheronInsights.com.My investment philosophy is centered around a "jack of all trades" approach, focusing on fundamentals, technicals, sentiment, macro themes and market structure.I am a CFA charterholder with a background in financial planning and investment analysis.

Disclosure: I am/we are long GDX, GDXJ. I wrote this article myself, and it expresses my own opinions. I am not receiving compensation for it. I have no business relationship with any company whose stock is mentioned in this article.