Beyond Meat (NASDAQ:BYND) has led to the start of a revolution in a worldwide change in meat consumption. The company's products can be seen as a solution to "meat cravings," while keeping an eye to the environment. BYND is clearly an industry disruptor, but the valuation has factored in high expectations for the company in many years to come. At the current price, I argue that BYND does not have an acceptable risk/reward profile.

To properly analyze Beyond Meat, it is necessary to investigate how the meat industry has evolved in the past 60 years. Indeed, rather than focusing on other vegetarian or vegan food, I see "real" meat as the main competitor of BYND products. With a long-term horizon, plant-based meat could take a significant slice of the meat market. 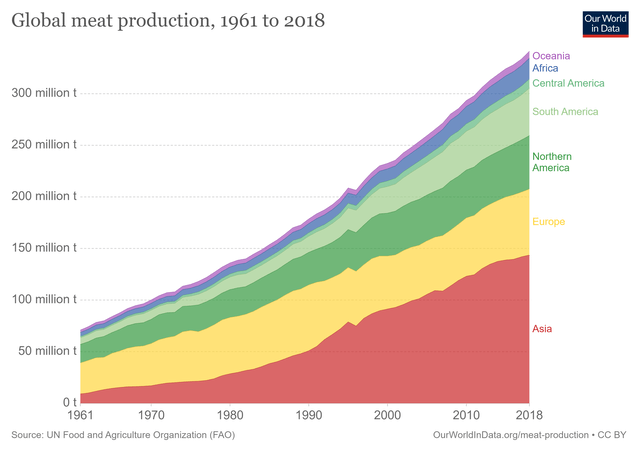 The consequences for the environment are terrible: deforestation, climate change, inefficiency, worsening of animal welfare and, indirectly, greater risks of pandemics like COVID-19.

Is Beyond Burger The Solution?

Beyond Burger can be considered as one of the alternatives to a beef burger, allowing the consumer to reduce his environmental impact.

Based on a comparative assessment of the current Beyond Burger production system with the 2017 beef LCA by Thoma et al., the Beyond Burger generates 90% less greenhouse gas emissions, requires 46% less energy, has >99% less impact on water scarcity and 93% less impact on land use than a ¼ pound of U.S. beef.

The research shows how eating plant-based meat contributes to decreasing the environmental impact and this comes with comparable taste and nutritional values. Therefore, Beyond Burger could be considered ONE of the many solutions available to decrease the waste of energy and reduce the environmental impact. However, Beyond Meat products are highly processed and cannot be considered "healthy," as they have the same amount of sodium and saturated fats as traditional burgers.

The competition is fierce. Various companies saw an opportunity in this ongoing change. Some of the competitors developing plant-based alternatives of meat are:

If we exclude Impossible Foods, none of these companies is an alternative to Beyond Meat as an investment. I believe Beyond Meat is the only pure-play in the plant-based meat environment. Indeed, all the above-listed companies have additional exposure to different product types.

If we considered the whole plant-based food producers as competitors, the industry is even larger. The shift to a more aware food choice would make these alternatives even preferable to plant-based meat.

Given the situation just presented, I would worry about margin pressure. The company has many competitors and the goal of each of them is to have plant-based meat, which resembles meat in taste and texture. Therefore, in my opinion, many companies will reach acceptable results and the advantage that Beyond Meat is having now will not last forever. This might bring greater opportunities in the long term. The plant-based meat industry could target part of the traditional meat industry with more competitive prices. An article from Barclays Research predicts that in 2029 10% of the meat industry will be taken by alternative meat. 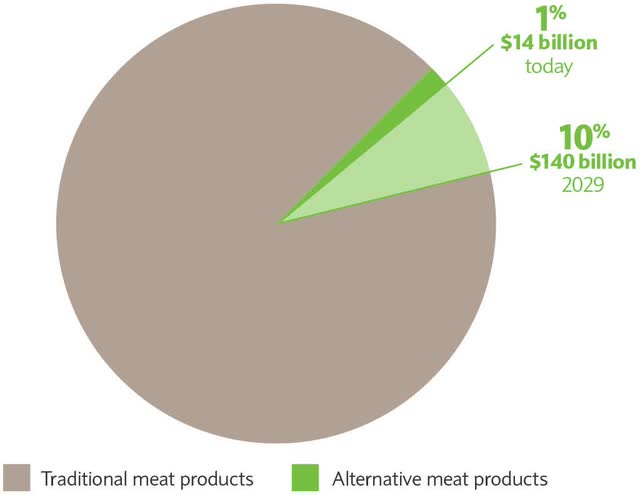 I believe that we have already been experiencing the start of a progressive cut in prices. For example, Impossible Foods is cutting prices aggressively and on Jan. 6, 2021, announced a 15% cut to its prices. This represented the second price cut in less than a year.

Beyond Meat also reduced its prices in the last quarter. As pointed out by CEO Ethan Brown in the last earnings call: margins were down due to both lower net price realization as a result of higher trade discounts and product mix and from lower absorption of fixed overhead cost due to COVID-19.

What might be the long-run gross margin is difficult to say. I believe we might see two scenarios. The first scenario is with high margins and plant-based remaining a niche in the meat market. Alternatively, margins could decrease, with lower retail prices and better competition to the traditional meat industry, thanks to the competition and the improvement of the technologies.

When thinking about the valuation, I believe we must keep in mind that Beyond Meat could have a potential total addressable market equal to the whole meat industry, which represents a TAM of $1.4 trillion.

The announcements lack of economic aspects make it also difficult to weight the recent partnership deal with PepsiCo (PEP), but this is an important event in terms of brand recognition and distribution. Pepsi is a worldwide famous and respectable brand and the deal represents a validation of the great work that BYND have been doing. Moreover, PEP has a worldwide presence and BYND will certainly benefit from it, leveraging their sales force and their contracts with the distribution.

The current valuation of BYND cannot be justified by the numbers the company can achieve in the short-run. The company is an innovator and at the current time has a competitive advantage in the industry given by a better taste and growing market share. To find a meaningful entry price we need to think from here in the next 10 years. A valuation of this type cannot be taken for granted, because of the enormous deviation from our scenario we can get. It can be solely used to have an entry point if we share the vision of the CEO and the company.

Even though I find it difficult to attribute a value to Beyond Meat, I tried to find a meaningful entry point with the following assumptions:

For this reason, I would consider increasing my position only below $115/share, which I already believe to be a price too high for the risks.

On the other hand, if I was holding the stock and believing in the vision of a world with high consumption of plant-based meat, I would not consider selling.

The CEO has a vision of a better world, with a transition from traditional meat to plant-based. The valuation depends on the realization of the vision. To justify this price, plant-based meat must get a greater share of the market, guaranteeing top-line growth for many years to come.

The main risk is the release of new technologies (e.g., lab-grown meat) or improvement of competition, which could lower margins and growth rates. An additional risk could be a change in consumer habits. With the new generations more inclined to a healthier lifestyle, Beyond Meat may not have the right products for this type of target customer.

The wide consumption of meat contributes to the worsening of the overall environmental situation. A plant-based diet can have a positive impact on the environment. In this situation, Beyond Meat is one of the companies giving an alternative to beef meat. However, direct competition is fierce.

Currently, BYND has probably the best plant-based meat products. I argue that the competitive advantage is going to decrease as the years goes by. The goal of the companies in the industry is to produce meat alternatives that have the same taste and texture as the "real" meat. I expect them to achieve it in the long term. As a result, the growth of BYND cannot continue at the current rates. Moreover, I consequently see a risk of downward pressure on the price of BYND products.

The TAM of the plant-based meat industry can be considered equal to the size of the global meat industry ($1.4 trillion). There is space for multiple players in the industry. To conclude, BYND is a pioneer in the plant-based meat industry. For this reason, I believe that a higher valuation is somehow justified. Nevertheless, the current valuation comes with high risk and I would wait for a better entry price to increase or open a position in BYND. A buying opportunity could be after the next earning release (Feb. 25, 2021), in case of bad news about the top-line growth or gross margin. For the time being, I rate BYND as a hold.

Davide Ravera
795 Followers
Registered Financial Advisor in Italy (Consulente Finanziario Autonomo, Delibera OCF n. 1735). Passed CFA Level 2.I am a growth-oriented value investor, mainly covering GARP stocks. I tend to be a contrarian investor, in order to take advantage of negative market sentiment. Hence, my stock picks tend to have a long time horizon (5+ years).I am a Quantitative Finance Graduate from WU Vienna and I used to work in the financial sector for different institutions and in various roles during my studies. I also started creating a community of Italian investors and you can find me on different social media: YouTube (@davideravera), Instagram (@davideravera.l), LinkedIn (@davideravera), TikTok (@davideravera.l).All of my articles are written to share my personal research and do not represent general or personalized financial advice of any kind.

Disclosure: I am/we are long BYND. I wrote this article myself, and it expresses my own opinions. I am not receiving compensation for it (other than from Seeking Alpha). I have no business relationship with any company whose stock is mentioned in this article.