The late John Bogle is one of my investment heroes. He pioneered the first index fund back in 1976 and founded investor-owned Vanguard, now the home for 30 million investors and $6.2 trillion in assets. Bogle was known as a fierce ally of the personal investor and led a transformation of the fund industry. He advocated a solid and common-sense approach to investing.

Throughout his illustrious and long career he commented occasionally on expected stock returns. His method was based on Occam’s Razor, which states that the simpler the explanation, the more likely it is to be correct.

What might Bogle say now about the U.S. market outlook? Before looking ahead, let’s review the approach and look back to see what it has taught us.

In one of my favorite investing books, Common Sense on Mutual Funds, published in 1999, Bogle said:

"Since 1802, annual real (after inflation) returns on stocks have settled near an average of 7 percent, though with awesome interim variation – a high of 67 percent in 1862 and a low of -39 percent in 1931. Huge though it may be, that range of 106 percentage points can serve as a powerful reminder of short-term market risk in the stock market.”

Bogle explained that the 7% real return is almost identical to the sum of real dividend yields and earnings growth during the period of 1871-1997, which adjusted for inflation was 6.7%. So why the large return variations around this steady earnings and dividend growth rate? Bogle said:

“They were caused by the fluctuations in the valuations that investors were willing to pay for $1 of earnings – the price-earnings ratio. This speculative factor has often proven powerful enough to add as much as 4 percentage points annually to the fundamental return, or to reduce it by an equal amount.”

Bogle Was Right for Part of the 1990s, But Then Speculative Juices Took Over

In his 1999 book, Bogle cited his return forecast published in the Journal of Portfolio Management in 1991 and how it fared:

“Based on an initial dividend yield of 3.1 percent plus assumed earnings growth of 6.6 percent per year, the analysis called for an investment return of 9.7 percent. As to the speculative return, a decline in the price-earnings ratio from the then-current 15.5 times to its historical 30-year average of 14.1 times would reduce this return by -1.0 percent per year. The result: a stock market return of 8.7 percent.”

Lesson: Bogle’s method, while logical and rational, proved correct for a while, but the market doesn’t always act rationally - even for years.

Bogle Had a Less Optimistic View in 1999 Which Proved Correct, But Not to the Degree He Expected

Some compare today’s market action to the 1999 bubble. Not long after Bogle’s book was published the dot-com bubble burst. What was Bogle saying back then? I recap his analysis below:

As a result, Bogle expected a mean reversion in the P/E ratio to about 20 and was looking for annual returns of 5-8%. At the time, this was viewed as rather pessimistic. Heck, one could earn 5% on safe Treasury bonds and stocks were roaring ahead 17% per year.

Nonetheless, even though the tone of his writing was very cautious, perhaps swept by the mania of the time, he was too optimistic! During the ten year period from the beginning of 1999 through the end of 2008, U.S. large caps returned -1.5% per year. Bogle’s conservative forecast was off by a whopping 6.5 to 9.5% per year. Another lesson learned, as noted by Yogi Berra: “It’s tough to make predictions, especially about the future.” Indeed Bogle acknowledged this reality in his book:

“The real test of my methodology was to be its performance as a forecasting tool. The results have been poor at worst, mixed at best.”

Why did Bogle choose ten years? Is that the right time frame to apply Occam’s razor? Well, I guess that’s a convenient long-term time frame, and one we humans like to use since we have a base-ten numbering system. But what happens if we look at the twenty-year time frame after Bogle’s 1990 forecast? Annual U.S. Large Cap index returns from January 1991 to December 2010 were 9.06%. That’s amazingly close to Bogle’s 1991 forecast of 8.7%!

A simple explanation is that the speculative returns of the latter half of the 1990s had to correct themselves during the first decade of the 21st century. Another way of putting it – returns in the late 90s borrowed from future returns.

This sounds eerily familiar to where we find ourselves today:

Before he passed in 2019, Bogle was interviewed by Morningstar in October of 2018. His forecast at the time was for ten year returns of “about 5.5% per year,” based on:

Fast forwarding, I took a crack at his method. The table below shows three scenarios – Base Case, Pessimistic and Optimistic, using data for the S&P 500 index. 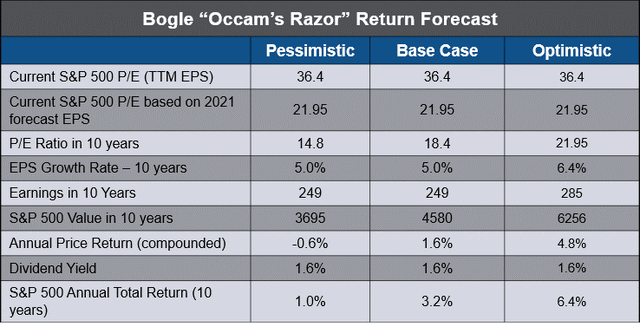 For the base case, I assumed earnings growth of 5%, below the recent five year average of 6.4%. Note that recent years reflect earnings fueled by large corporate tax cuts, record corporate stock buybacks and slow but steady economic growth. It’s hard to assume a continuation of all these positive factors going forward. In fact, Biden and the Democratic-controlled Congress plan to raise corporate taxes. And large and growing debt levels pose a risk to economic and corporate earnings growth rates in the longer run.

Accounting for the 2020 earnings crash, I spotted the market its optimistic jump in earnings assumed for 2021, from 91.68 to 153.86 per share (per S&P data), since the market has already priced that in (forward P/E of 21.95). I then applied earnings growth from that higher post-pandemic forecasted baseline. Another way to look at the base case: 3% GDP growth plus 2% inflation, or 2% GDP growth plus 3% inflation equals earnings growth of 5%. Those numbers could be optimistic. The optimistic scenario assumes a continuation of the 6.4% earnings growth of the five years leading up to the pandemic (2015-2019).

The Speculative Return Should Be A Drag - At Least Modestly

The P/E ratio for the base case (18.4) assumes it will move halfway from its forward 2021 P/E of 21.95 toward its long term median value of 14.84. The Pessimistic scenario shows the P/E moving all the way to its long term median. An Optimistic scenario is more of the same – the P/E will stay at its elevated post-2008-09 crash average of 21.86. Many argue (and expect) the latter given low rates and the expectation that they will persist for years. But this expectation still has to be tempered by the lofty CAPE ratio of 36. That level stands at the 98% percentile of its history.

These scenarios produce estimated annual nominal returns (including dividends) ranging from 1.0% to 6.4% per year. It’s notable that all the returns are well below historical outcomes and are skewed to the downside. Even the Optimistic case return is less than half that of recent history (13.6% for five years and 15.2% for ten).

Interesting, But Not a Basis for Investing

For investment numbers geeks like me, it’s fun to look at this type of analysis and play what if. Like Bogle in 1999, maybe my numbers are too optimistic. Perhaps the strong returns of the past five years and during the pandemic have borrowed from future returns. Experienced investors will recall the lost decade that started the 21st century. But like the latter half of the 1990s, the market could continue to expand its speculative return for years to come.

Regardless, we should heed Bogle's words of wisdom:

“So invest with intelligence and common sense; always have some portion of your assets in stocks and bonds; be sparing about precipitate and extreme changes in these proportions. And be skeptical about every prognostication you are given, including mine. If you have set an intelligent route toward capital accumulation, stay the course – no matter what.”

The Bogle model suggests lower returns ahead. But I wouldn’t try to time the market. Nor would I dramatically change well-thought out, long-term equity allocations that align with investing goals based on any forecast. But one could (and I do) tilt their long-term equity composition to sectors that have more attractive valuations and potential returns relative to their risk. Several of my articles cover this, including the latest in a series, Back to the Future: Mean Reversion.

Thanks for reading this. I look forward to your comments.

Ralph Wakerly
1.33K Followers
Wakerly is an investor, entrepreneur and consultant with over 35 years of investment experience. Utilizes a macro-style, passive, index-based asset allocation investment style, with a value orientation and contrarian bent. Manages/advises on family portfolios collectively valued in the eight-figure range. B.S. Engineering and MBA in investments from University of Illinois. 11,000+ hours of investment management and research. Accomplished entrepreneur, consultant and business owner. Wakerly has a passion to help individuals improve their financial literacy and investing skills and besides writing for SeekingAlpha and Advisor Perspectives has presented at universities, churches and various webinars.