Last week, nearby NYMEX crude oil eclipsed the early January 2020 high and critical technical resistance level at $65.65 per barrel. Just five months earlier, on November 2, 2020, the energy commodity traded to a low of $33.64.

The price of crude oil has nearly doubled as the bullish stars lined up for the energy commodity. Since 2018, a roaring stock market did little to support the prices of energy-related shares. The leading US oil companies and related businesses watched as their share prices evaporated. When stocks rallies, they did not follow. When stocks corrected lower, the oil companies led the way on the downside. In March 2020, when risk-off selling hit markets across all asset classes, traditional energy stocks plunged. After a recovery, the fell again in early November when Democrats captured the White House and both houses of Congress with promises of addressing climate change by ending production and consumption of fossil fuels.

Meanwhile, sector rotation in the stock market can be a powerful force. In a sell the rumor and buy the news reaction, we have seen a substantial recovery in oil-related shares as the price of the energy commodity continues to climb. The oil market seems to be telling the world, be careful what you wish for as the process of ending dependence on hydrocarbons could lead to a prolonged period of price appreciation.

The Direxion Daily Energy Bull 2X Shares (NYSEARCA:ERX) is a short-term trading tool that holds a turbocharged position in many of the leading US oil and oil-related companies.

Last Thursday, the oil ministers from OPEC and the Russians agreed to keep oil production steady, meaning that the output cuts addressing the global pandemic will remain mostly in force. The news came as nearby NYMEX WTI crude oil futures remained above the $60 per barrel, and Brent futures on the Intercontinental Exchange moved towards $65 for the first time since January 2020.

Russia and Kazakhstan will modestly increase their production while the other cartel will continue to produce at the same level. Saudi Arabia intends to extend its voluntary one million bpd production cut into April. The Saudi oil minister said, “At the risk of sounding like a stuck record, I would once again urge caution and vigilance.” While the comments appear to address the ongoing demand threat posed by the global pandemic, the cartel’s power is growing. A higher petroleum price is OPEC’s goal as the cartel would rather sell fewer barrels at a higher price than more at a lower price. 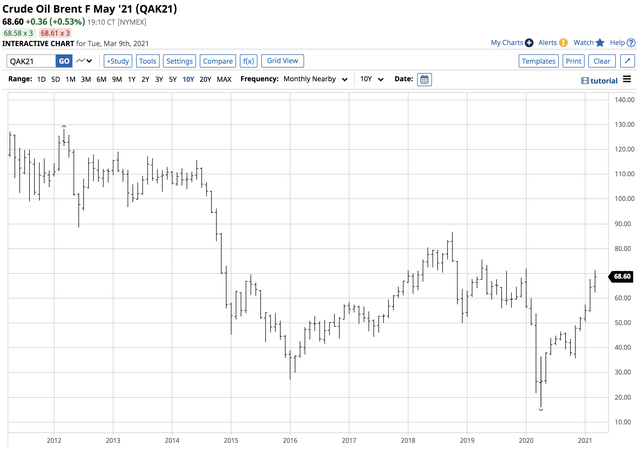 There is a lot more to OPEC’s decision than fears over demand created by COVID-19. The bottom line is that the Middle East and Russia view the price trend in crude oil as an opportunity to squeeze the United States as a payback for the past years when shale oil diminished the cartel’s pricing power.

In the aftermath of the latest OPEC session, Saudi Energy Minister Prince Abdulaziz bin Salman taunted the United States saying, “Drill-baby-drill” is gone forever.” As the oil price rises, the potential for increased production from Texas, Oklahoma, and North Dakota is a lot lower in 2021 than it was over the past years.

The reaction of oil prices to Saudi Arabia’s surprise production cut early this year and the latest OPEC decision shows that the energy commodity is now a lot more sensitive to the cartel’s policy decisions. The pricing power baton has shifted back to the Middle East and Russia in the aftermath of the 2020 US election.

On his first day in office, President Joe Biden canceled the Keystone XL pipeline project that carries petroleum from the oil sands in Alberta, Canada to Nebraska and other US pipeline destinations leading to Cushing, Oklahoma, the delivery point for NYMEX crude oil futures. The Biden administration immediately rejoined the Paris Climate Accord in a symbolic move that it will be aggressive in addressing climate change. With his party’s left flank opposed to any fracking, the President supports a far stricter regulatory environment for the US energy industry over the coming years.

Technological advances have caused the cost of producing crude oil to decline; increased regulations will erase producers’ benefits. While the administration’s energy policy favors alternative, clean energy sources for producers and consumers, it will take years, if not decades, to replace crude oil. Meanwhile, after decades of an energy policy that worked to achieve independence from the Middle East, the Saudis, Russians, and other producing countries smell blood in the water. The US production is falling, which means it will need to source the energy commodity via imports. If the Saudis are correct and “drill-baby-drill” is dead under the Biden administration, they are likely to ring the cash register with their oil production if they continue to drive the price higher.

US production is falling, and that will continue

In March 2020, US daily crude oil output reached an all-time high of 13.1 million bpd under the Trump administration’s energy policies. According to the Energy Information Administration, as of February 26, US production stood at ten million bpd, a decline of 23.7% over the past year.

The substantial shift in US policy, with consistent pressure from progressive Democrats, means that US output is unlikely to reach the March 2020 level any time soon, if ever again. The Saudis are making an aggressive bet that US climate change policy will be a financial gift that keeps on giving over the coming years.

WTI and Brent crude oil prices have not traded at the $100 per barrel level since mid-2014. The Saudis and Russians blame the US shale producers for their financial woes. Payback is now within their reach.

Vaccines creating herd immunity to COVID-19 will be a shot in the arm for the global economy. After a year of social distancing guidelines in the US, an end to the pandemic is likely to create an economic boom. People will return to work, travel, and venture out more during the coming months than over the past year. Oil demand is likely to surge. We have already seen signs that energy demand is surging across the US.

The crude oil market has become far more sensitive to events in the Middle East and OPEC production decisions. In January, Saudi Arabia’s decision to add another one million bpd to its production cut caused the price to move higher. Last week’s OPEC+ decision to lead cuts largely intact pushed NYMEX crude oil over the $65.65 2020 peak. Moreover, an attack on Saudi production the appeared to be by Iranian-backed rebels sent within 63 cents of the January 2020 high when the May contract reached $71.36 per barrel.

Crack spreads have been trending higher, indicating growing demand for oil products in the wake of the global pandemic.

Gasoline refining spreads rose from $6.43 in late November to over the $21 per barrel level as of March 8.

The heating oil crack spread, a proxy for other distillates, moved from $6.44 in late September 2020 to over the $15 per barrel level on March 8.

While the stock market and some other commodities have run into selling, crude oil continues to make higher highs. Gold continues to correct, copper and lumber fell from their latest highs, and other commodities have been consolidating. Crude oil made another new and higher high on March 8. The energy-related stocks have been one of the strongest stock market sectors since late October. 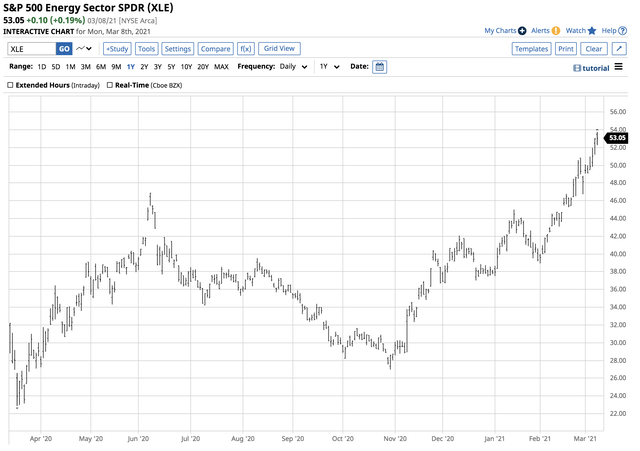 Markets rarely move in a straight line. Even the most aggressive bull markets suffer corrections. However, the trend in crude oil stocks remains higher as of March 8. The Direxion Daily Energy Bull 2X Shares (ERX) is a short-term product for those looking to turbocharge upside returns in US crude oil and energy-related stocks. The top holdings and fund summary of the ERX product include: 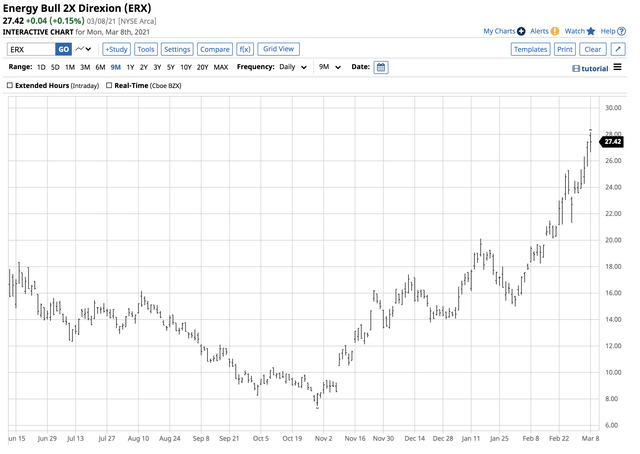 From late October through March 8, the ERX product rose from $7.48 to $28.15 per share or 276.34%. For those looking for a correction in US energy-related shares, the ERY product operates inversely.

The trend is always your best friend in markets. As of March 8, it remains higher in crude oil and energy stocks. The shift in US energy policy that hands pricing power back to OPEC+ remains bullish for the price of the energy commodity that powers the world.

The Hecht Commodity Report is one of the most comprehensive commodities reports available today from a top-ranked author in commodities, foreign exchange, and precious metals. My weekly report covers the market movements of over 20 different commodities and provides bullish, bearish, and neutral calls; directional trading recommendations, and actionable ideas for traders.

Andrew Hecht
28.21K Followers
Author of Hecht Commodity Report
Weekly commodities commentary and calls, from a Wall Street veteran
Andy Hecht is a sought-after commodity and futures trader, an options expert and analyst. He is the #2 ranked author on Seeking Alpha in both the commodities and precious metals categories. He is also the author of the weekly Hecht Commodity Report on Marketplace - the most comprehensive, deep-dive commodities report available on Seeking Alpha.