Boulder Growth & Income Fund (BIF) isn't a closed-end fund that is often discussed. The distribution yield on the fund is rather low and it pays quarterly. However, that doesn't mean that BIF can't be for the right investor. With a high concentration of Berkshire Hathaway - that is both class A and class B shares (BRK.A) (BRK.B). Why this might be appealing is that this fund regularly trades at a 17%+ discount. It also pays a small distribution, where an investor in BRK won't see dividends as Warren Buffett reinvests the cash flow into new businesses.

BIF is described as a "non-diversified closed-end fund with a total return investment objective." The fund has been around for a lengthy period of time with an inception date of 1972.

As far as how the investment managers intend to achieve this total return, doesn't seem important as the portfolio hardly ever moves. Last year was a "high" turnover year with 6% turnover. 2019 had a turnover of 2% - both 2018 and 2017 reported 1% turnover.

That being said, for those interested this is how they intend to employ their investment strategy (even though they in reality just keep the same portfolio.)

...the Fund utilizes a bottom-up, value-driven investment process to identify securities of good quality businesses trading below estimated intrinsic value. The intent of this process is to identify investment opportunities that will provide attractive returns over a long holding period. By doing this, the Fund seeks to keep portfolio turnover low, which the sub-adviser believes helps to minimize associated trading costs. The Fund maintains a high level of investment flexibility and has the ability to invest in equity and fixed income securities of domestic and international companies without limitation to a company's market capitalization.

The fund is relatively large at over $1.5 billion in total managed assets. They utilize minimal leverage at 14.62%. This could be noted as another benefit of investing in this CEF for a leveraged approach to investing in BRK.

They recently issued senior unsecured notes on November 5th, 2020. These were through three fixed-rate series. These were at relatively more expensive rates than what other funds are financing at. However, since it is fixed and they don't mature for 10, 12 and 15 years - this move can make sense. The idea would be that after a couple of years these rates will be appealing; and that they locked in these lower interest rates now at "2.62%, 2.72% and 2.87%, respectively."

The fund's expense ratio with interest came to 1.16%. Excluding leverage, this came to 1.12%. The difference is only marginal at this point as the fund issued these shares at the beginning of November and they last reported their Annual Report on November 30, 2020. In the 2018 and 2019 fiscal years, they didn't have any borrowings outstanding.

Performance - Watch BRK, Though Not A Perfect Match

The fund can be tied to the performance of BRK, and in which way those shares are heading BIF will be moving too, in large part. There is some slippage due to fees and also ~70% of the portfolio is invested elsewhere.

Over an even longer period of time, outside of the 10-year chart above. It seems like the main divergence came after 2008/09 from the fund. As BRK shares headed significantly higher and BIF lagged. This could be one of the "downsides" if you are looking at BIF as a way of exposure to BRK. 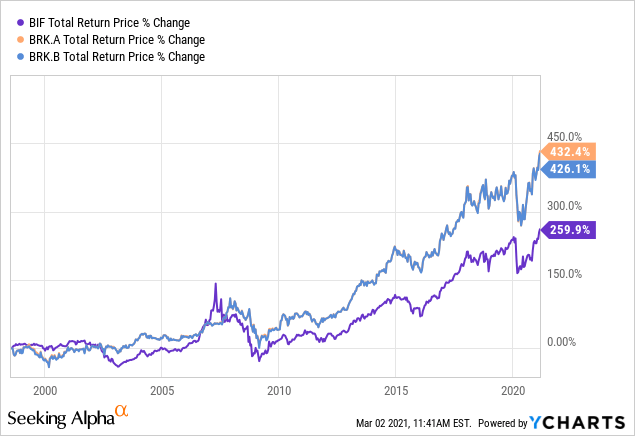 Due to the lack of innovation on their portfolio and relatively weak distribution policy. The fund has experienced deep discounts for a considerable period of time. Though in 2006-2008 the fund was trading at some significant premiums - the reason for this seems to have been because of a strange period of time when they were paying a large distribution. 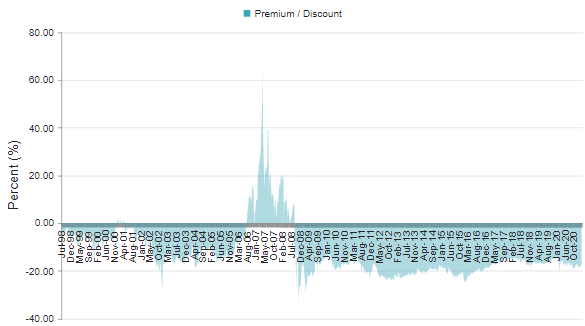 That large premium coincides with the distribution chart from CEFConnect.

Overall, we can see a pretty inconsistent distribution policy over the fund's life. This can make it unappealing for an income investor that wants to know what they are going to get paid, for the most part. 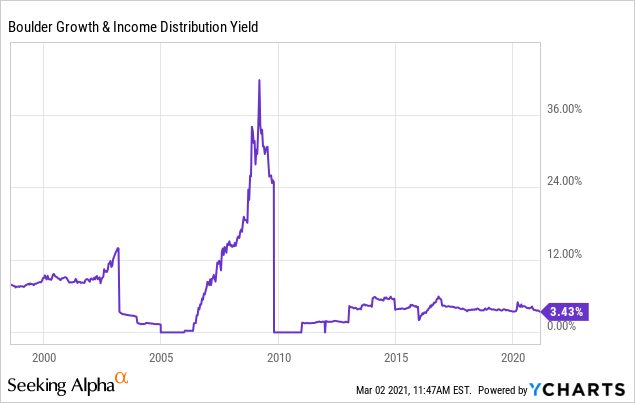 Considering that the fund holds a significant portion of its portfolio in a non-dividend-paying stock. The net investment income [NII] isn't enough to cover the distribution. Though this isn't unique to BIF as most equity funds are the same, and that they rely on capital gains to fund the distribution. 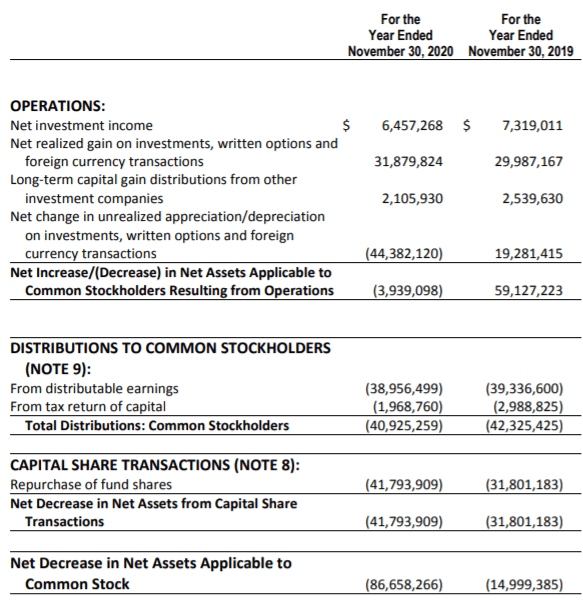 What we can see above is that NII coverage is almost 16%, a slight drop from last year's 17.3% coverage. The reason for the decline in NII from year-to-year is from total investment income [TII] declining some from roughly $22.5 million to $20.8 million. Additionally, they now had some interest to pay on their senior notes.

The other factor here impacting the fund is that they are repurchasing some of the fund's shares back. This appears to be the only thing that they are actively doing to try to lower the fund's consistent discount. This is an accretive move as they are buying back shares at a significant discount to NAV.

As far as the tax classifications for the fund's distributions. They include mostly long-term capital gains. However, since they aren't realizing enough from their positions in their underlying portfolio - some of the distribution is also classified as ROC. That is even while they "earned" the distribution in 2019. 2020 wasn't fully earned as NAV declined a bit; from $13.85 at the start of the year to $13.59 at the end of the year. 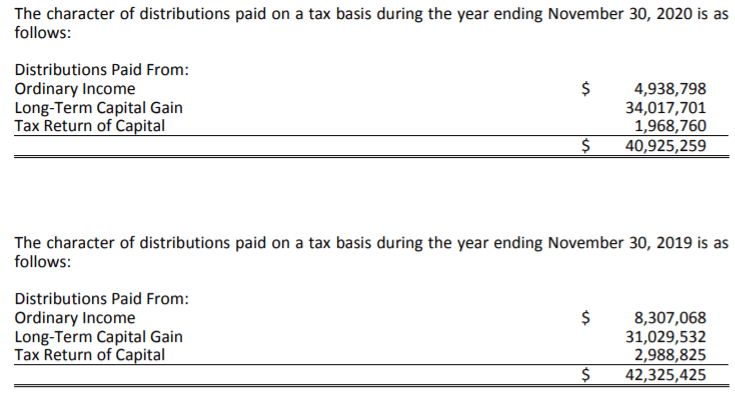 At the end of November 30, 2020, they listed that BRK class A and class B shares constituted 31.2% of the fund. The second-largest position was cash and treasuries at 20.1%. The large allocation to cash is most likely because they just raised a bunch of cash through their fixed-rate senior notes.

As of 01/31/2021, the fund is still holding a considerable amount of U.S. Treasury Bills. However, the website breaks down the holdings in a different manner. It doesn't group up these Treasury Bill holdings. Nor does it group up the BRK shares into one holding either. So the top ten does look a bit different.

Between both classes of BRK stock, we still have a large exposure there of 31.83%. This isn't a terrible top holding to have either. Not only because it is tied to the famous Warren Buffett - but because it is a conglomerate in itself. A couple of the subsidiaries include Duracell and Geico. Though the full list is wide-spanning across many different industries.

Thus, that is why we see under their industry allocations that a high allocation is classified as "diversified." 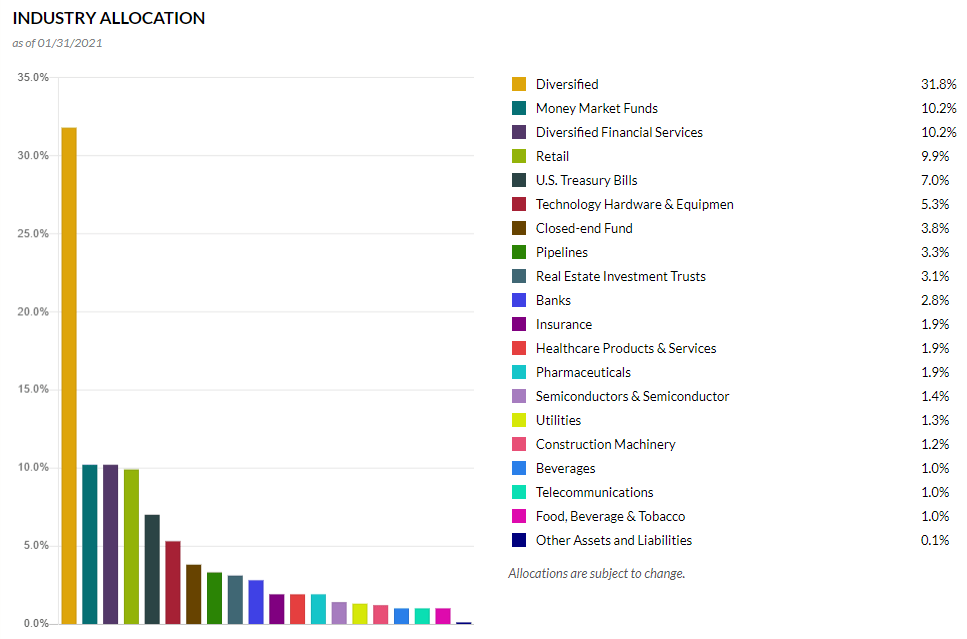 Besides the large position in BRK, the fund also holds several other interesting companies and even other CEFs. JPMorgan (JPM) also being a particularly sizeable position at 8.6% of the portfolio. There is also Yum! Brands (YUM) and Cisco Systems (CSCO) at a material allocation.

Most investors will recognize JPM, it is held in several other CEFs as well. However, YUM and CSCO are a bit unusual to hold and don't show up regularly. CSCO certainly isn't as popular as other tech stocks - even in the big push into tech last year. YUM also isn't widely held by funds that I'm familiar with. For those that might not know; they own the KFC, Pizza Hut and Taco Bell brands.

The fund lists 38 total positions. If you remove the Treasury Bill holdings, you are only left with 26 positions. They also list 2 different money market holdings so this is further reduced to around 24 investments.

BIF is an interesting fund - though it certainly isn't for everyone. The relatively weak distribution rate and concentrated holdings will likely temper the enthusiasm for a deep discount. Additionally, this deep discount has been in place since the 2008/09 market collapse.

I believe this can be attributed to the fact that the fund was paying an extremely large monthly distribution before the collapse in the market. This was then reduced to nothing at all - except for the occasional annual or semi-annual distribution. Finally, it seemed like they were going to make an effort in making the fund more appealing with a monthly distribution again. However, the first sign of market volatility in Q4 2018, and it made them shift to a quarterly distribution. Which is much less appealing - especially when it's such a low-yielding CEF in the first place.

For most investors, I suspect that this fund would be a pass. However, there is something to be said about an investment in the fund as a way to get exposure to BRK at a deep discount and also collect some distribution at all too. I would even say that a large portion of the portfolio holdings that aren't BRK are rather appealing too, for the most part. Still, unless some activist comes in and tries to pressure the fund; it is unlikely that the low effort of some share buybacks will make this fund lose its discount.

Disclosure: I am/we are long JPM. I wrote this article myself, and it expresses my own opinions. I am not receiving compensation for it (other than from Seeking Alpha). I have no business relationship with any company whose stock is mentioned in this article.

Additional disclosure: This article was originally published to members of the CEF/ETF Income Laboratory on March 2nd, 2021.