For the most part, heavily hyped-up IPOs, especially well-known ones in the consumer space, often see their shares rocket up way too high to be considered as long-term holds. Surprisingly, Bumble (NASDAQ:BMBL) is an exception. The most notable rival to Tinder and a dating app known for having women initiate the first message, Bumble went public in early February, but its stock has failed to find direction either up or down since then. In spite of Bumble's rapid growth and even its strides toward profitability, the stock has failed to truly "pop" and win over investors' love.

In early March, Bumble reported earnings for the first time. It grew revenue at 31% y/y, saw a massive jump in paid users, and drove substantial adjusted EBITDA and cash flow growth. Still, investors were unmoved, and the stock is actually down nearly 10% since its earnings report.

In my view, Bumble's combination of strong fundamental performance plus its modest share price movements create a strong opportunity for investors to jump in at a reasonable price:

In my view, there are a number of elements behind the bullish thesis for Bumble:

Despite what I feel to be rather obvious strengths for Bumble, its share price hasn't at all reached stratospheric levels. At current share prices near $68, Bumble trades at a $12.55 billion market cap, based on 184.6 million fully-diluted shares outstanding per Bumble's finalized prospectus. After we net off the $128.0 million of cash and $876.2 million of debt on Bumble's most recent balance sheet, as well as the $2.053 billion of net proceeds that Bumble received from its IPO (50 million shares sold at $43 per share, less expenses), the company's enterprise value is $11.24 billion.

Meanwhile, as you can see in the snapshot above, Bumble has guided to $716-$726 million in revenue for the upcoming year, representing 32-34% y/y growth. This puts Bumble's current valuation at 15.6x EV/FY21 revenue. This certainly isn't cheap: but for a growth star like Bumble that is expecting growth acceleration in the year ahead, I see additional room for upside here.

The bottom line on Bumble: keep watching Bumble's movements and buy this stock on any meaningful dips.

Let's now go through Bumble's latest fourth-quarter results in greater detail. As previously mentioned, this is the company's first earnings release since going public - and given that the company beat expectations, it's a good indicator of the company's earnings momentum going forward. 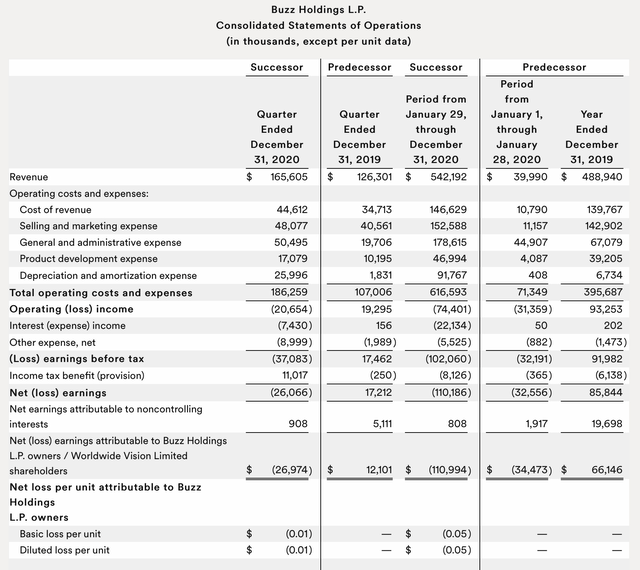 One thing you'll notice is that Bumble's historical compares above are a bit complex (refer to the "predecessor" line in the second column for the prior-year Q4 compare), but once the "successor" company moves into the prior-year compare beginning this year, the story should simplify. In Q4, Bumble delivered $165.6 million in revenue, up 31% y/y and beating Wall Street's expectations of $163.3 million (+29% y/y). As a reminder, Bumble actually operates two apps under its corporate umbrella: Bumble itself, as well as a lesser-known dating app called Badoo. Of these two, Bumble is the strongest grower, and Bumble app revenue actually grew at a stunning 47% y/y pace.

As a reminder, Bumble offers a number of benefits to its paid subscribers, including:

It offers a variety of subscription packages for its paid users, including 7-day, 30-day and 90-day subscriptions. There are also a number of features that can be purchased on an "a-la-carte" basis, including SuperSwipe, which is essentially a way of letting a match know that you "really like" them, and Spotlight, which makes a user's profile more prominent and more likely to be matched to other daters.

Though Bumble doesn't disclose its total users or its paid user ratio, it's my hypothesis that the re-opening of bars and restaurants in many cities across the U.S. and the ability to go back on traditional dates will increase Bumble users' propensity to pay in 2021. As such, given that Bumble exited Q4 at a 31% y/y growth rate, expecting only 32-34% y/y revenue growth in FY21 may be a low bar for Bumble to cross.

There's a lot to like about Bumble as we head toward a broad re-opening of the U.S. This is a premier dating app that is seeing >30% y/y growth even during pandemic times and has a strong mandate to take on Tinder as the leading dating app in the U.S. Look for a buying opportunity here.

Gary Alexander
25.37K Followers
With combined experience of covering technology companies on Wall Street and working in Silicon Valley, and serving as an outside adviser to several seed-round startups, Gary Alexander has exposure to many of the themes shaping the industry today. He has been a regular contributor on Seeking Alpha since 2017. He has been quoted in many web publications and his articles are syndicated to company pages in popular trading apps like Robinhood.

Disclosure: I/we have no positions in any stocks mentioned, but may initiate a long position in BMBL over the next 72 hours. I wrote this article myself, and it expresses my own opinions. I am not receiving compensation for it (other than from Seeking Alpha). I have no business relationship with any company whose stock is mentioned in this article.