It's been a painful few months in the gold (GLD) sector, with several explorers down more than 40% from their 2020 highs. Fortunately, one name that’s held up very well during the sector-wide slump is Roscan Gold (OTCQB:RCGCF) a ~$130 million market cap gold explorer busy hunting for gold deposits in elephant country in Mali. To date, the company has delineated several targets on its land package and it looks like it could eventually become a takeover target for a producer in the area. While I generally avoid pre-resource names due to their higher risk, Roscan looks like a name worth keeping an eye on for more speculative investors. 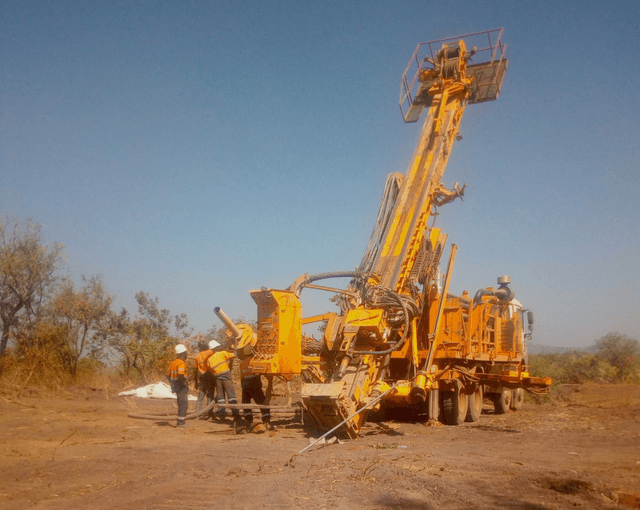 Roscan Gold is a relatively under-the-radar gold explorer in Africa, though continued drilling success has begun to put the company on the map. As of March, Roscan has multiple targets on its 346 square-kilometer land package, and it's worth noting that the company's tenements are within an 80-kilometer radius of multiple operating mines. Unlike the average junior, Roscan Gold has a solid team at its helm with a board of directors that includes the former CEO of AngloGold Ashanti (AU) and Vedanta Resources, Srinivasan Venkatakrishnan, and the former CEO of Ashanti Goldfields, Sir Samuel Jonah. The company is also led by Nana Bompeh Sangmuah, who previously served as Managing Director, Equity Research for Metals & Mining at Clarus Securities. Let's take a closer look at the company below: 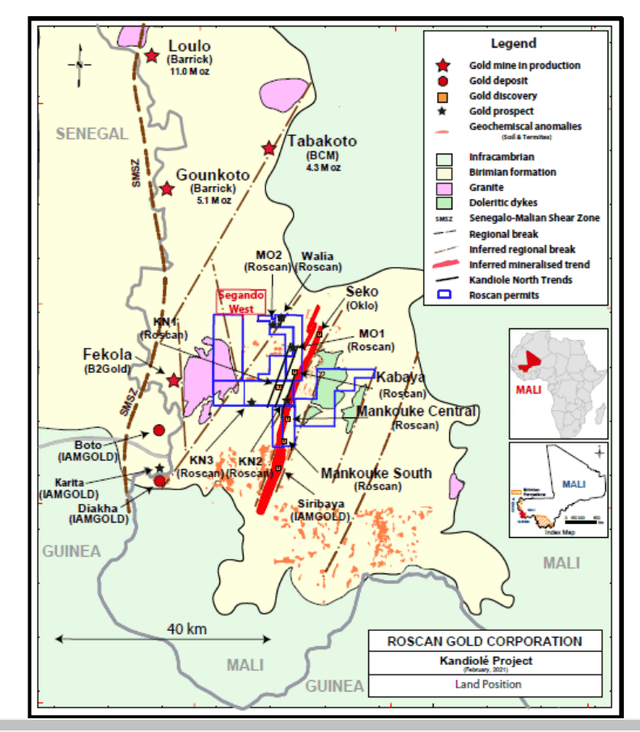 If we look at the map above, we can see that Roscan is busy exploring for gold resources in Mali, with B2Gold's (BTG) Fekola Mine to the west, Barrick's Gounkoto and Loulo mines to the north, and BCM International's Tabakoto Mine to the north as well. To date, the company has tremendous drill success at its Mankouke South [MS] deposit and was so confident in its results to date that it chose to acquire Komet Mali SARL from Komet Resources, which increased Roscan's tenements by 35 square kilometers. This land package was located between Roscan's Kandiole Project and Oklo's (OKU.ASX) Dandoko Project, where Oklo has also had quite a bit of drill success to date, earning it a solid reputation on the Australian Market. 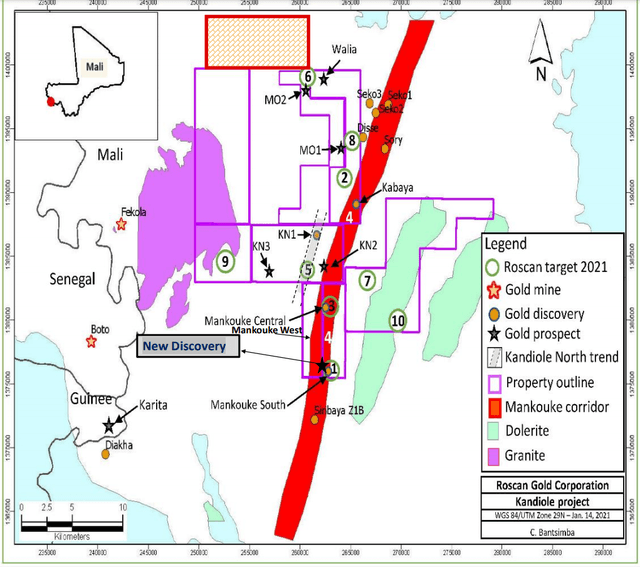 As shown in the map above, Roscan has multiple targets on its Kandiole Project, with MS being one of the targets that's been drilled the most to date, and Mankouke Central [MC] also showed quite a bit of promise. Recently, the company also added Mankouke West [MW] to its tenements, with Roscan confident that mineralization extends onto this ground. This recent move adding a further 16 square kilometers to its land package. On the northern portion of Roscan's property, the company has Kabaya (labeled as 2), with a ~140,000-ounce historical resource, Kandiole North (labeled as 5), and Kandiole West (labeled as 9), which sits less than 10 kilometers from Fekola. For those unfamiliar, Fekola is B2Gold's crown jewel and produced more than 600,000 ounces of gold last year at costs below $750/oz.

So, how does drilling look to date?

If we look solely at the MS deposit, which has received much of Roscan's attention, we've got several highlight holes from the deposit showcased below. These holes are not only quite thick and high-grade, but they're also near-surface, which makes this a very exciting discovery for Roscan. Generally, anything over 250 gram meters is solid, and nearly all of the below holes easily meet this criterion. The MS deposit has been tested down to 200-meter vertical depths and has a strike length of 700 meters based on current drilling. Assuming drill success continues with average grades continuing to come in above 2.0 grams per tonne gold, this could easily be a ~750,000-ounce resource on its own.

If this were the extent of the project, Roscan would still be a decent story, but as noted, Roscan has multiple other targets, with 24 meters of 4.78 grams per tonne gold drilled to the west of Mankouke South, multiple strong intercepts reported at Kandiole North, and several 2.0+ grams per tonne gold intercepts from Kabaya, where we've seen a 100% drill success rate since the acquisition. It's worth noting that Kabaya's 140,000-ounce resource at ~1.11 grams per tonne gold was constrained to a depth of barely 60 meters, and Roscan has more than tripled the depth of the deposit to 196 meters with the deposit remaining open at depth. While it's still very early to put a number on potential ounces at the Kandiole Project, I wouldn't be surprised if Roscan proved up more than ~1.65 million ounces by Q4 2022 across the measured, indicated, and inferred resource categories combined.

So, is Roscan Gold a Buy?

While Roscan Gold is a decent story and could very likely become an acquisition target for a producer in Mali, it's harder to make a case for the stock being cheap unless it's set to prove up a multi-million-ounce resource at Kandiole. I would argue that a 1.5 million to 2.0 million ounce resource is within reach here. However, I don't think there's anywhere near enough data to suggest this is a 3+ million-ounce resource, even if Roscan is heading in the right direction. After the most recent financing, Roscan has a very bloated share count for a sub-1-million ounce resource explorer, with roughly ~318 million shares outstanding. At a share price of US$0.42, this translates to a market cap of ~$134 million. Let's try and figure out what fair value for African ounces might be: 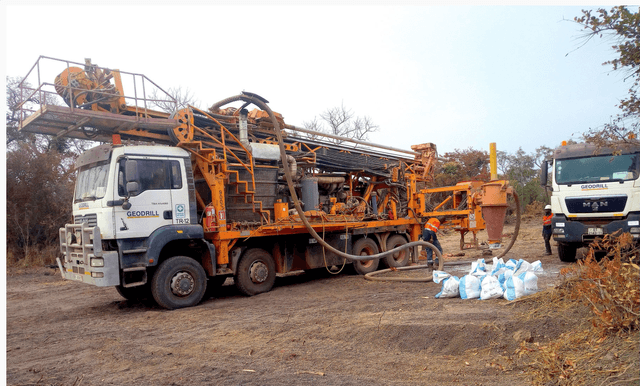 For anyone invested in African producers, it's clear that the jurisdiction gets little to no respect, with Endeavour Mining (OTCQX:EDVMF), Perseus Mining (OTCPK:PMNXF), AngloGold Ashanti (AU), West African Resources (OTCPK:WFRSF), and Galiano Gold (GAU) all trading at a valuation per reserve ounce of below $325.00. It's no different for explorers, with West African Resources buying Toega for less than $55.00/oz and Perseus buying Exore for just over $70.00/oz. If we look at current market comparables, Tietto Minerals is valued at just ~$42.00/oz based on a 3.02 million ounce resource base in Cote d'Ivoire.

If we average out all of the three latter examples, which are more relevant peers to Roscan as they were/are pre-revenue, we come up with a price paid of less than $60.00/oz for African resource ounces. If we look at all African explorers, the average is actually quite a bit lower, but we will assume a fair value of $60.00/oz given that we could argue that Roscan offers synergies given Kandiole's proximity to existing operators. So, what's a fair value for Roscan?

I have shown what I believe to be fair value to be at different resource sizes of 1.6 million ounces, 1.9 million ounces, and 2.5 million ounces in the above table. I'm afraid I have to disagree with some investors that Kandiole ounces are worth anywhere near $100.00/oz as the going rate for African ounces is much lower and was much lower even in Q3 at higher gold prices, so I have used a fair value of $60.00/oz and an upside case of $65.00/oz if Roscan can prove up 2.5 million ounces. A 2.5 million-ounce resource will not be easy to prove up before Q3 2022, in my opinion, and I don't see any reason to estimate anything past 18 months ahead, as the market is typically forecasting 18 months in advance at most.

Based on what I've deemed to be fair value, Roscan's fair value is US$0.36 if it can prove up 1.9 million ounces at Kandiole by Q3 2022, and US$0.30 if it only proves up 1.6 million ounces. This would suggest that the valuation here is not that compelling, even if this is a very solid African story. It's important to note that this is purely my opinion based on market comparables, and it's certainly possible that B2Gold could see the potential synergies here if drill results continue and pay over ~$180 million for Roscan or well above $60.00/oz.

This is because Fekola's current reserve grade is ~2.22 grams per tonne gold, and Roscan should be able to prove up at least 1 million ounces at an average grade of above ~2.40 grams per tonne gold, which would augment grades at Fekola, even after accounting for slightly higher trucking costs to the mill. The fact that this ore is near-surface makes it even more attractive, and to date, Kandiole looks like a much more attractive target than Anaconda, which is B2Gold's lower-grade resource that it's currently working to build up next to its Fekola Mine. Having said all that, B2Gold has a track record of buying gold during gold bear markets, and with Papillon acquired for less than ~$600 million with a massive resource, I don't think it's likely they would be paying top-dollar for Kandiole or more than ~$200 million any time soon.

Roscan Gold is undoubtedly an exciting story in the African gold space, but I don't see a ton of value at current levels unless the company can prove up a 2.5+ million-ounce resource. This is because the company's share count has grown massively over the past two years, and with ~318 million shares outstanding after its recent capital raise, this large share count has capped some of the upside. In summary, I believe Roscan is a name worth keeping an eye on for speculative investors, but I don't see any reason to pay more than US$0.45 for the stock. Obviously, a higher gold price and new discoveries could push Roscan much higher, but based on the data available, I think there are a few more compelling opportunities elsewhere in the junior space.

Taylor Dart
25.49K Followers
"A bull market is when you check your stocks every day to see how much they went up. A bear market is when you don't bother to look anymore."- John Hammerslough - Disclosure: I am not a financial advisor. All articles are my opinion - they are not suggestions to buy or sell any securities. Perform your own due diligence and consult a financial professional before trading or investing.

Disclosure: I am/we are long GLD, EDVMF. I wrote this article myself, and it expresses my own opinions. I am not receiving compensation for it (other than from Seeking Alpha). I have no business relationship with any company whose stock is mentioned in this article.