In the last two weeks, I've been buying just a few funds while trimming some others to maintain overall exposure.

Those three funds are discussed in this report and include:

A Quick Summary Of the CEF Market

As is typical, whenever one shifts to one of side of the boat, the other side rises. In the fixed income space, we've been seeing investors shift all to the short-duration side of the boat. As such, funds that have any sort of length duration have seen their share price get hit while funds in the loan space, areas of high yield, and some places in mortgages have seen strong demand.

I closely follow prices and NAVs of sectors over a short-to-medium period of time to identify trends. Loans continue to do well with strong NAV returns. We continue to focus on that sector but are seeing some signs of stabilization and perhaps, (it may be too soon) some signs of green shoots in the duration centric funds.

Those are funds that are interest rate sensitive. Obviously, with long-term interest rates spiking in the last 5 weeks from under 0.9% to over 1.5% (an increase of nearly 70%!), anything sensitive to interest rates will be harmed. In the CEF sector realm, that includes utilities, real estate, preferreds, and of course, munis.

In general terms, munis are down about 2%-3% in discounts but down closer to ~3% in NAV terms or roughly 5%-6% in aggregate. That's a rough go for munis in a relatively short period of time and reminiscent of the fourth quarter of 2018.

Our assessment is that rates may have peaked, at least temporarily. NAVs are starting to inch higher and have risen for four straight sessions. Could we be at a pivot point? We think it's a bit too early to know for sure but, given our changes to the Core Income Portfolio this month, we think shifting over the next month or so to some duration (higher interest rate sensitivity) may make sense.

I continue to add to my loan portfolio. As we've noted in the last several months, you have had a great confluence of opportunity in the space- something that only comes along every few blue moons. That is a wide discount, strong and improving yields, and a very favorable setup for the asset class.

In the last three months, we had added heavily to Pioneer Floating Rate (NYSE:PHD) after it conducted a tender offer last year. The post-tender selloff created a perfect opportunity to get in at a wide discount and not only ride it tighter but catch a strong tailwind from the NAV rising. We discussed loan NAVs as being very compelling especially relative to high yield. That bears out in the recent NAV performance with 3-month NAVs total returns of loans rising +4.7% compared to high yield at +2.5%.

Prices have done even better rising 5.9% among loans and 2.2% in high yield. One sector had discount closure, the other discount widening.

This is a fund we mentioned in our CEF Report last week. The four Nuveen floating rate funds (JFR)(NSL)(JSD)(JRO) are all virtually the same (except that JSD has lower daily volume). So you could buy a few thousand shares of each to spread out the liquidity. You can see that tight NAV correlation in the chart below: 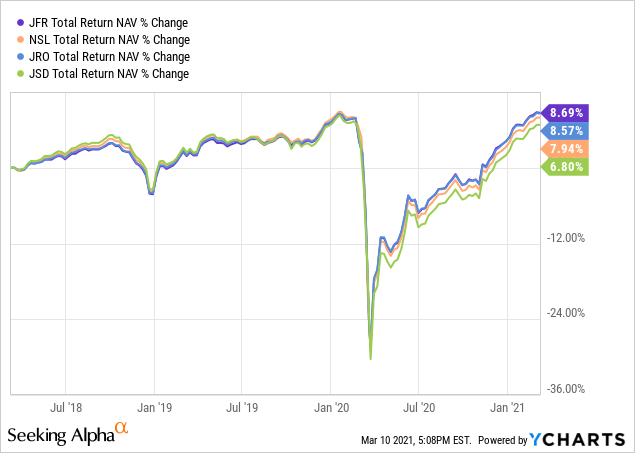 The level distribution policy is intended to provide shareholders with stable, but not guaranteed, cash flow, independent of the amount or timing of income earned or capital gains realized by a Fund. Each Fund intends to distribute all or substantially all of its net investment income through its regular monthly distribution and to distribute realized capital gains at least annually.

The NAV continues to power higher even as other loan funds have seen their NAV growth slow. And the price is powering higher at a faster rate, closing the discount.

The goal is really to be in rather than penny-pinch too much on price. There aren't a whole lot of buys out there so when you see a good setup, you need to pounce.

This is a muni fund that has a lighter duration than most muni CEFs. The duration is about 6 years which is roughly in line with a taxable multisector bond mutual fund. Most leveraged muni CEFs have durations around the 10 years level. That means that a 1% move in interest rates will have an opposite 10% move in the fund (i.e. interest rates move up 1%, fund NAV down 10%).

The fund was launched with a term structure meaning it liquidates 10 years after launch at the then NAV. The fund was launched in late 2012 which means it will liquidate late next year (unless the sponsor attempts to prevent that). The inception NAV was $14.33 and the most recent NAV is $14.46 so the portfolio has performed well over that time period earning at least the coupon.

The reason we like it is that term feature and lower duration. If rates do continue higher, but you still want tax-free income from munis, than this is a fund that you should use. The term feature and near-term liquidation also means that you capture the discount over time as it approaches that liquidation date. The current discount is -4.2% so you get an additional 4.2% cap gain above and beyond the annual 3.8% tax-free income.

We believe that any discount wider than -4.1% is buyable. We calculate that equates to a total return of over 5.5% per year, almost all being tax-free. Hard to beat that.

This is another term fund. Getting the picture? This fund is very similar to the Brandywine Global Income Fund (BWG) that we owned last year for the tender. That is a fund that has roughly half the portfolio in investment grade corporates (with some sovereign) and the other half in non-investment grade corporates (mostly). The NAV correlations are 95% so they move fairly closely.

The reason I like this fund better is because of the term structure. The fund liquidates on December 2, 2024 at the then NAV. The current discount to NAV is over -6.7% as investors flee the duration of the fund (more below). That discount is going to be captured over the next few years as we approach that liquidation date.

The yield is 7.05% of which about 6.2% is earned through the net investment income production of the fund. The NAV performance has been pretty good and actually comes close to beating PIMCO Corp & Income (PTY) over the last three years. I know, hard to believe. But the bonus here is that the 6.7% discount is captured of the next few years adding to your yield earned. We calculate a tailwind yield of 1.7% per year. So the true return is approximately 8.75% per year for the next four years.

Now obviously you have to own it for a number of years to capture the tailwind yield. Owning now until August doesn't do any good if the discount doesn't close. This is a great buy-and-hold investment for the next 3-plus years.

I love term funds that are not target terms because you typically do not have the usual distribution cut glidepath as you approach liquidation. Conversely, there's always a risk that the sponsor attempts to perpetuate the fund meaning convert it from term to perpetual untethering the price from the NAV.

Our member community is fairly unique focused primarily on constructing portfolios geared towards income. The Core Income Portfolio currently yields over 8% comprised of closed-end funds. If you are interested in learning about closed-end funds and want guidance on generating income, check out our service today. We also have expert guidance on individual preferred stocks, ETFs, and mutual funds.

Disclosure: I am/we are long GDO, JFR, NSL, NID. I wrote this article myself, and it expresses my own opinions. I am not receiving compensation for it. I have no business relationship with any company whose stock is mentioned in this article.