Over the last couple of decades, Poland has emerged as one of the standout economic stories across the globe. Since its entry into the European Union in 2004, it has taken great strides to transform itself. In recent years, it has been well-regarded for its balanced and consistent growth profile, strengths in both services and industry, a well-educated and highly skilled workforce, and sound central bank and macroeconomic policies.

Investors looking for access to companies within this landscape have the option of pursuing the iShares MSCI Poland ETF (NYSEARCA:EPOL), but as I highlight later in my piece, there are plenty of risks to be considered. EPOL grants you exposure to a portfolio of 35 Polish stocks at an expense ratio of 0.59%, which is in line with most other European country focused ETFs. EPOL tracks the MSCI Poland IMI 25/50 Index which attempts to reduce concentration risk, but with a portfolio of only 35 stocks, facilitating any sort of diversification would appear to be challenging.

From a yield perspective, EPOL is not the most appetizing option around with a current forward yield of 1.12%, which is also incidentally lower than the 4-year average dividend yield. Worryingly over the last 3 years, the dividend outflow has declined by ~19% CAGR.

How does EPOL compare to other peers?

I wanted to see how EPOL profiles, relative to other comparable country-specific ETFs. As a starting point, I looked at European countries that have a similar GDP per capita in PPP terms, as Poland, and then I’ve gone and picked the ETFs that focus on these countries exclusively.

Source: Prepared by the author taking data from YCharts, ETF.com, and Trading Economics

There are quite a few standout points to be noted from the table above. EPOL’s valuations are quite reasonable, and lower than the average of this pack (9.94x), but it’s also important to not look at that in isolation. As per YCharts, Poland has the weakest earnings profile out of the lot, with negative growth of -9% expected next year. Considering likely weak earnings, the multiple of 9.94x doesn’t necessarily have to be considered as cheap, more so as the likes of TUR and EUR (who are cheaper than EPOL) have better earnings profiles.

As mentioned above, the challenges that Polish banks could face with capital pressure and credit quality may be a key reason for the weak earnings profile. But do note that even over the next years, EPOL comes across as the one with the weakest earnings profile.

EPOL also comes across as quite volatile, with its beta of 1.52x, which is the highest out of the lot. That said, traditionally it has managed to cope with drawdowns pretty well, and this could come in handy when sentiment turns; ETFs such as GREK and TUR have seen much deeper drawdowns in the past increasing their risk profile. From a liquidity angle as well, EPOL fares quite well, it is relatively popular with an AUM of $230m and spreads are quite low at $0.03; thus as a prospective trading vehicle, it is unlikely to cause too many issues in terms of execution and price discovery.

The performance of Polish banks will be fundamental to the performance of EPOL as they account for the largest weight in the portfolio, by far. Financial stocks in EPOL account for 33%, more than double the share of the next largest segment -consumer discretionary at 15%.

Prospects for the expansion of net interest margins of these banks look quite remote at the moment, as the country is in the midst of a low-interest rate regime (rates had previously been cut from 1.5% to 0.1%). Inflation risks have been gathering pace in Poland, but despite that, it looks as the Polish central bank will continue its dovish policy and rate hikes are not expected until 2022.

Also do consider that the asset quality of Polish banks was not particularly robust even before the pandemic, with an elevated NPA ratio of 6.6% (with elevated credit costs of 70-90bps). This is expected to have hit 9.1% this year, and will likely stay close to this level in FY21.

The dual combination of high credit costs and an unappealing environment for net interest rates should filter down to bottom-line weakness, and subdued Return on Asset ratios (ROA). Loan growth is also likely to be stuttered, and ongoing lockdowns don’t help (on account of a spike in cases, the country recently announced a lockdown until April 9th) To mitigate these broad weaknesses in the banking sector, one “may” see some consolidation within the banking sector, as traditional behemoths look to acquire less-efficient peers, at potentially cheaper multiples.

Regardless, in the near term, the more pressing issue that investors should be mindful of is what happens with the CHF denominated mortgages that many Polish banks currently hold. There’s significant litigation risk around this issue and has the potential to sway sentiment towards the banking sector either way and could be key to EPOL’s near-term prospects.

Since Poland entered the Eurozone in 2004, CHF denominated mortgage loans have proven to be a popular product for the Polish population Apparently more than 1 in 5 Polish mortgages are held in CHF; during its peak, more than half the Polish mortgages were denominated in CHF, although this has since dipped to around 20-23% (Source: Erste Group, S&P Global Ratings). When these loans were first taken, the FX risk wasn’t deemed as particularly huge, with the CHF/PLN at around the range of 2.85-2.

However, in recent years, one has witnessed an enormous surge in the Swiss Franc which is currently at the 4.2 levels. Unable to cope with the high borrowing costs, Polish citizens had gone to the European Court of Justice (ECJ), highlighting the “abusive” clauses that were inserted in the original terms of the loan, which they were unaware of. The ECJ has ruled in the borrowers’ favor, and this has proven to be a millstone around the neck of the Polish banking sector, as so far, almost 90% of the court cases have been won by the borrowers.

In most cases, banks have been asked to invalidate such loans or remove the various clauses. Also, in most court rulings, the Polish banks have been ordered to convert the loan back into the PLN exchange rate taken at the time of loan origination.

Now, sometime during mid-April, the Polish Supreme Court is due to announce its verdict on whether the banks can charge their clients over the use of credit during the said mortgage period (even though the credit has been invalidated), and also determine the rate at which new PLN denominated loans should be linked to (Wibor rate or Libor CHF).

Once again, if the ruling is in favor of the borrowers, this could put significant pressure on the capital levels of the banks, as they seek to reach out-of-court settlements with all these borrowers. For instance, one of the largest banks in Poland - PKO Bank Polski is looking to set aside funds equivalent to around 2 years of its annual profits to deal with this rumbling issue. That said, considering how long this issue has going on, a definitive conclusion (even if it proves to be financially restrictive) would be much appreciated for investor sentiment and clarity towards the Polish banking sector.

The fundamental prospects for the Polish economy may not currently be as impressive as it has been in previous years, but if you’re technically-minded, you’d note that the risk-reward equation for EPOL at these price levels look rather promising.

Firstly, take a look at the chart below which measures the relative price performance of EPOL to the broad European ETF (IEUR). There are two main takeaways from here.

1)The current ratio of around 0.33 is a record low number; it’s also a level it had revisited back in October-2020 before recovering, so there's a good chance we see something akin to a double bottom pattern that one associates with price charts. Incidentally, we witnessed something similar between Oct 2016 and June 2017 period- a double bottom, albeit this was at a much higher level of around 0.43.

2) This ratio’s overextended nature can also be validated by the RSI which has now dropped to oversold levels of ~22 and tends not to stay here for too long.

The evidence from the relative strength chart suggests a bounce in EPOL is imminent. 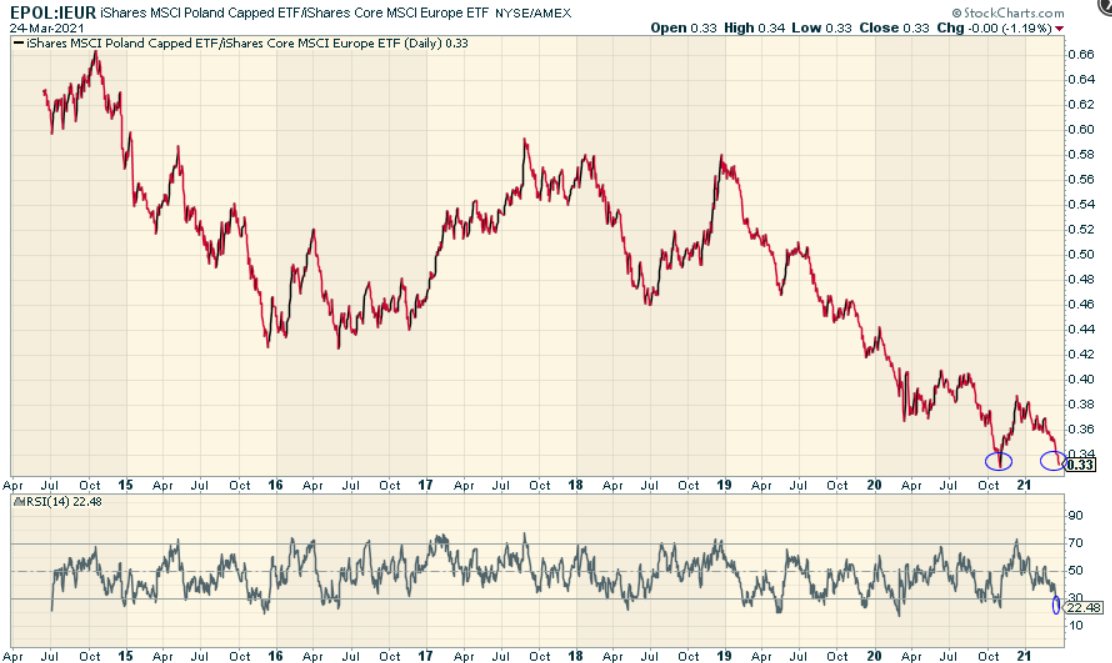 The attractive risk-reward for EPOL can also be further validated by the price imprints on the standalone chart. Admittedly, EPOL has not been a great source of wealth-generation for a few years now. Since peaking in 2011 - close to the $40 levels - the price has been trending lower via a descending price channel. Nobody is suggesting that it’s going to revisit the lofty highs of $40 any time soon, but if you focus only on the channel, I think one could make a case for EPOL testing the upper boundary at around the $24 levels, which also coincides with a congestion zone that was witnessed from mid-2018 to mid-2019. I think that would represent a good area to take some profits off the table (if it comes to pass). From the current price levels to the channel boundary, you're looking at potential profits of ~36%.

Another reason why I like the current up move (from the lows seen in March 2020) is that it has been punctuated by two useful pullbacks; this makes the trend more sustainable, as it doesn't look overstretched. Relentless one-way up-moves have a greater risk of translating into violent selling, as I’ve noted in the chart pattern section of my WST article. 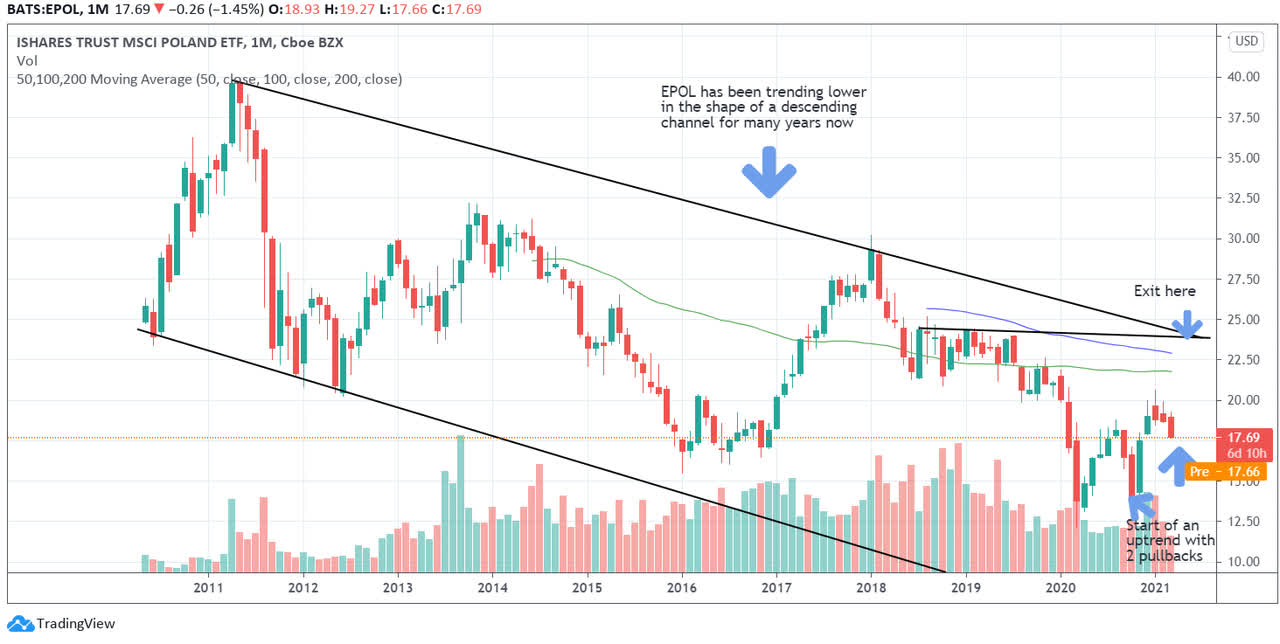 To sum up, fundamentally, there are plenty of risks surrounding the EPOL story, but on a technical basis, the risk-reward looks alluring. Given this inherent dichotomy, I am sitting on the fence with EPOL.

The Alpha Sieve
1.81K Followers
Investment research, primarily oriented towards uncelebrated/under-covered stocks and ETFs, across North America, Europe and Asia. Seeks to combine both fundamental and technical disciplines while making an investment/trading proposition.