For 10 years I have been pounding a mantra about the sequence in which housing market data unfolds. The present situation is a perfect illustration of why that mantra is correct. Here it is:

With that said, let’s take a detailed look at the housing market.

Below are two graphs of the YoY change in interest rates (the easiest way to look at the data), both long-term Treasuries (in blue) and mortgage rates (teal), vs. single family permits (red), which are selected because they are the least noisy of the leading housing data.

Not only that, but using archival data of long-term government bond rates vs. nonfarm housing starts, I can track the relationship back to the end of World War 2, 75 years ago:

While there’s a fair amount of noise, over the entire 75 year period, with a few exceptions (discussed immediately below) a decrease in rates (shown as an upturn in blue) has generally led to an increase in permits, typically with roughly a 6-month delay. Conversely, an increase in rates has typically led to a downturn in permits with a similar delay, enough of which leads to a recession.

One obvious exception to the above was the 2004-05 housing bubble and the ensuing bust. In 2004-05, despite the fact that interest rates were rising, everyone “knew” that “house prices only go up,” and so continued to bid up housing sales and prices. When that bubble popped, the downturn in rates wasn’t sufficient to turn around sales until prices sufficiently deflated, which they had by 2012.

Sidebar: The Impact of Demographics

Demographics also come into play. The appearance of the Baby Boomer generation, first in the multi-unit and then single family home sectors of the market, is obvious in the increased housing construction during 1965-85, and the ensuing subdued period of 1985-2000 as the much smaller Gen X entered the market.

The typical median first-time home buyer age has historically been 30 to 32 years old:

That demographic (ages 25-34) began to increase even during the housing bust, and has been increasing ever since. It is nearing a plateau now (h/t for the below graph to Calculated Risk): 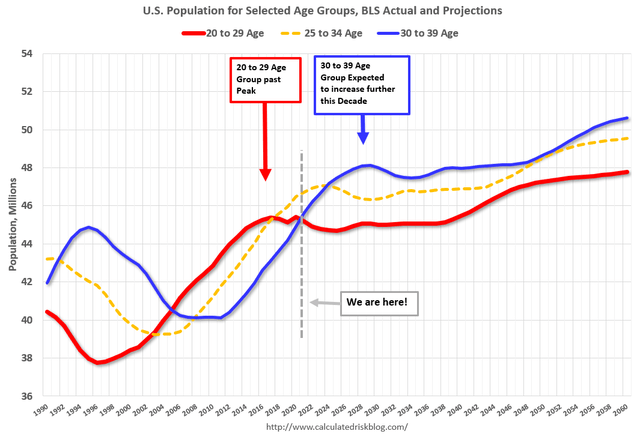 The surge in this demographic put a strong tailwind under the market. As a result, when mortgage interest rates increased by about 1.25% in the latter half of 2013, in 2014 single family permits only declined YoY in one month - February - and then by only -0.5%.

By contrast, note that in the low interest rate environment of the late 1940s and 1950s, when Boomers were young children, and the market was dominated by the “Greatest Generation,” even small increases in rates on the order of +0.25% to +1.0% led to YoY declines in housing starts of -20% and even -30%!

With the median age of first-time homebuyers having risen towards age 32, the demographic tailwind of younger Millennials is still in play, although not so much as 5 or 10 years ago. As a result, while an outcome as bad as that of the 1950s looks very unlikely, the sanguine outcome of 2014 also appears to be too optimistic a forecast.

The first graph below shows both the Case-Shiller National Index, (blue, left scale) in the graph below) and the FHFA purchase only house price index (green) compared with single family permits (red, right scale) as discussed above:

It’s easy to see that permits led prices at both the top of the housing bubble and the bottom of the bust. To show the more subtle comparisons during the 10-year expansion thereafter plus the coronavirus recession, once again I employ the YoY% changes in the next graph:

Again there has typically been a 3 to 6 month lag between when housing permits turn, and when price changes accelerate or decelerate. The big YoY surge in permits that began near the end of 2019 and with the exception of the 2 lockdown months of March and April continued, and throughout 2020, did not show up in prices until after the March-April 2020 lockdowns. Even though permits, starts, and sales have all turned down since January, house prices have continued to soar, and even accelerated in the past several months. Prices will likely continue to rise into this spring and even perhaps into summer before they, too, turn down.

The below graph once again shows the Case-Shiller and FHFA house price indexes as above, and compares them with the number of houses for sale from the new home sales report (orange), all measured YoY:

With the exceptions that inventory is generally more volatile, and turned down early prior to the 1990 recession, the relationship has held intact for over the past 30 years. While the absolute amount of housing inventory has continued to decrease, a comparison of prices vs. inventory shows that on a YoY basis, house price increases decelerated in 2019 and bottomed in October of that year, the YoY% change in inventory continued to decline to a nadir of -12.3% as of August 2020. Since then, the YoY% decline in inventory has sharply abated, and was only -4.6% in February.

Note that this has not been the case with existing houses, inventory for which is not seasonally adjusted, and made all-time lows in January and February (h/t Wolf Street): 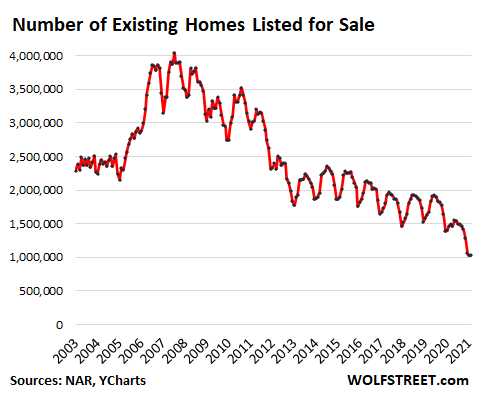 I fully expect that, with both higher mortgage interest rates and sharply higher prices, inventory even in that series will shortly sharply reverse higher.

The above examination of the housing market has shown that in early 2021 it has behaved exactly as the model forecast (and indeed, exactly as my last examination of this model two months ago in January). Increases in interest rates, first in Treasuries and more recently in mortgages, have led to an incipient downturn in housing permits, starts, and sales. Meanwhile, house prices are still reacting to the big increase in construction and sales in 2020, leading to the hottest seller’s market since the days of the housing bubble. Finally, housing inventory has not yet turned around, but the YoY declines have bottomed out and are in the process of reversing. I fully expect this reversal in inventory levels to be the big “surprise” in the housing market between now and the end of summer.

The big question going forward is whether the 1950s or 2014 are the better paradigm for what we can expect the increase in interest rates to lead to in housing construction this year, and in the economy as a whole in 2022. If it is the latter, the economy will be barely knicked. If it is the former, a recession in 2022 is more likely. Although my general sense is that the outcome will be somewhere in between, I will need to see the direction of interest rates for at least several more months before I can venture any better guess.

New Deal Democrat
3.4K Followers
New Deal democrat As a professional who started an individual investor for almost 30 yeas ago, I quickly focused on economic cycles and the order in which they typically proceed. I have been writing about the economy for nearly 15 of those years, developing several alternate systems that include mid-cycle, long leading, short leading, coincident, lagging and long lagging indicators. I also focus particularly on their effects on average working and middle class Americans.
Follow