The Q4 2020 earnings season is coming to an end and Gran Colombia Gold (OTCQX:TPRFF) is one of the last gold miners that reported their Q4 financial results. Although the numbers also include some negative surprises (the production costs grew to uncomfortable levels), the overall results are not bad and Gran Colombia remains significantly undervalued.

Although the gold production declined by 2% quarter over quarter, the gold sales declined by 12% to 52,478 toz. This helped to push the unit production costs higher. The total cash costs increased to $904/toz, which is 13.6% higher than in Q3 and 32% higher than in Q4 2019. The AISC climbed up to $1,382/toz, which is 23% higher compared to Q3 and 38% higher compared to Q4 2019. Besides lower sales volumes, the costs also increased due to higher labor costs, higher taxes related to the higher gold prices, and higher sustaining CAPEX, as part of the expenses were delayed from H1 2020 due to COVID-19. As the gold sales should increase in Q1 and probably also the sustaining CAPEX will be lower, and the higher-cost Marmato mine will be excluded from the reports, the cash costs and AISC should go back down. However, the AISC will probably not return below $1,000/toz.

As the gold sales volume declined significantly, while the average realized gold price remained flat at $1,875/toz, the revenues declined by 12% to $99.7 million. Also the operating cash flow declined considerably to $30.4 million. It is 55% less than in Q2; however, it is in line with the quarters preceding Q2 2020. In Q4, Gran Colombia recorded a net loss of $51.3 million and EPS of -$0.59. However, this negative result was attributable to various non-cash items. The adjusted net income equaled $7.7 million. 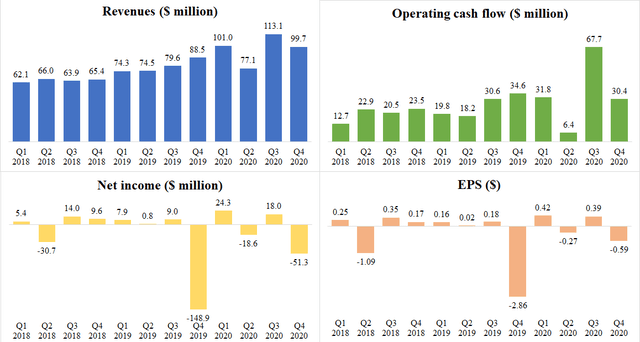 Gran Colombia's cash position worsened slightly to $122.5 million. The debt increased as it also includes the debt of Aris Gold. More than a half of the debt is attributable to Aris, and it will disappear from Gran Colombia's books as soon as Q1 2021.

As shown in the chart below, Gran Colombia remains significantly undervalued. The price-to-revenues ratio is only 0.72, and the price-to-operating cash flow ratio is only 2.08, which is an extremely low value. Although Gran Colombia has relatively small reserves (however the resources are quite big) and it has to face Colombia-related jurisdiction risks, its shares are very cheap compared to its peers. It is important to note that Gran Colombia's equity interest in Aris Gold alone is worth nearly $109 million. Gran Colombia's market capitalization is only $267 million. 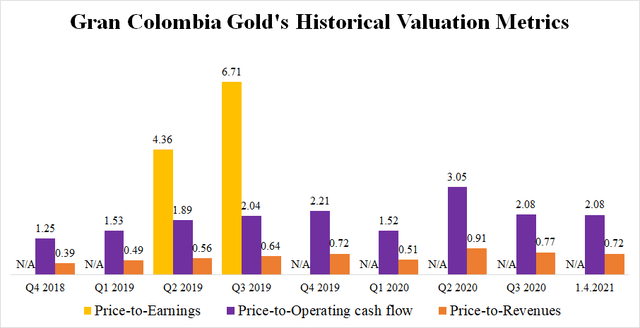 Only two weeks ago, which means long after the end of Q4, another important event occurred. Gran Colombia announced the acquisition of Gold X Mining (OTCQX:GLDXF). The deal values Gold X at C$315 million ($250 million), but Gran Colombia will pay less, as it already owns approximately 20% of Gold X. The whole payment will be made in Gran Colombia's shares. It is possible to argue that an all-cash offer would be better for Gran Colombia's shareholders. On the other hand, Gold X's Toroparu project is fully permitted, and it contains measured, indicated, and inferred resources of 10.5 million toz gold. It means that Gran Colombia is paying only $24/toz of resources. Moreover, Toroparu is located in Guyana, a better jurisdiction than Colombia, which should provide some much-needed risk diversification and it may also help to unlock the value of the Segovia properties. 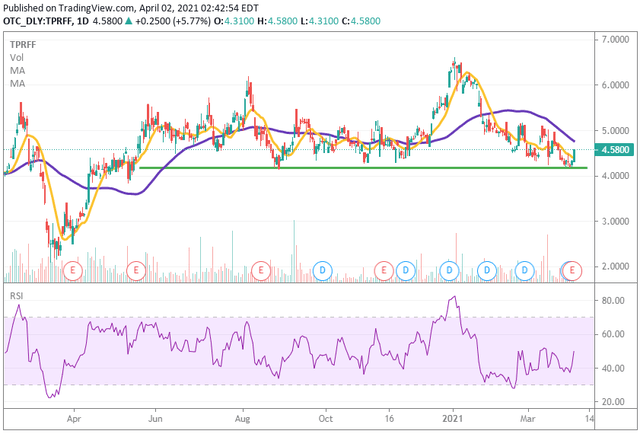 The chart shows that Gran Colombia's shares still remain in a side-trend with strong support in the $4.2 area. Over the last several months, it was possible to make some decent money by buying the shares around $4.2 and selling them after they approached the $5 level. How long this pattern can last is only to be seen. Only this week, the share price bounced from the support and it is going back up again. It has already crossed the 10-day moving average and it will probably cross also the 50-day one early next week. It should subsequently approach the $5 level, but the further direction will depend on the gold price heavily.

What I don't like about Gran Colombia Gold's Q4

Disclosure: I am/we are long TPRFF. I wrote this article myself, and it expresses my own opinions. I am not receiving compensation for it (other than from Seeking Alpha). I have no business relationship with any company whose stock is mentioned in this article.