On-chain analysis provides insight into the health of the network and flow of funds. Despite the recent 10% drop in price, a confluence of factors points to a continuation of the bull trend to new all-time highs. An investor with no insight into on-chain analysis would likely panic sell into the recent volatility caused by a drop in the hash rate from a power outage in Xinjuang province, China. In reality, liquidations of over-leveraged traders are healthy for the network.

Bitcoin (BTC-USD) created a higher low amidst the recent drop in price at $51,200 compared to the March 2021 decline to $50,200. Combining bullish technical analysis with healthy on-chain data, I believe this is a "buy the dip" opportunity.

This ratio compares Bitcoin’s market capitalization to its realized capitalization. The market capitalization is the number of coins circulating multiplied by the price per coin. It constitutes the value of the entire network. Realized capitalization gives an average price paid for all coins on the network at the time they last moved on the blockchain. It is the value whereby most Bitcoin investors purchased their coins. This metric matters because investors can use it to gauge when most participants entered the market. As is the case in all bull markets, investor participation is most high at the end. A z-score is simply the number of standard deviations from the mean.

If MVRV-z is below one, then the exchange-traded price is below the average price of all Bitcoins paid. This makes Bitcoin a tremendous buying opportunity and it only occurs in the troughs of bear markets. Though a value above five is considered overvalued, the MVRV-z peaked at 11.1 in 2011, 11.4 in 2014, and 11.5 in 2018. This metric is currently at 4.3, meaning we are far away from the mass participation that typifies bull market tops. 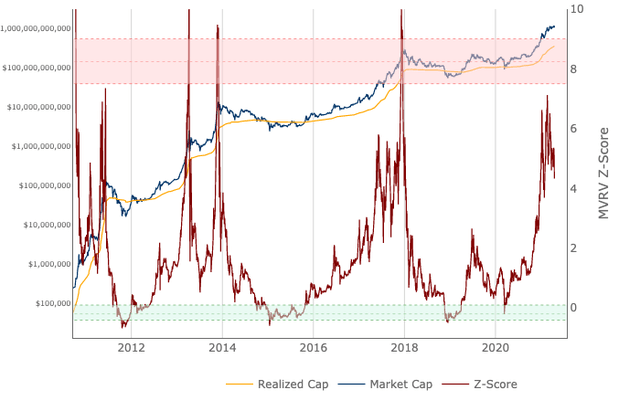 The Mayer Multiple is a technical indicator that also determines whether Bitcoin is overbought, oversold, or fairly priced. It divides the price of Bitcoin by the 200-day moving average. Trace Mayer, the investor who first proposed the model, determined that a value above 2.4 on the multiple signaled overvalued territory. Meanwhile, a Mayer Multiple below 1 signaled deeply undervalued territory as the price dipped below its 200-day moving average.

The 2013 bull market eclipsed a Mayer Multiple of six while the 2017 bull market peaked at 3.8. Seeing as this bull market cycle has been stronger than the 2017 cycle on a percentage basis, I expect it to surpass 3.8. Though the multiple reached 2.8 after an exponential increase in January, the metric currently sits at 1.69 after the long consolidation at the $50,000 price level and recent price drop. Again, these figures do not point to a manic market.

Willy Woo created the Network Value to Transactions (NVT) Ratio in 2017, comparing it to the P/E ratio of equities. Instead of earnings per share, this ratio divides the market capitalization of Bitcoin by the daily volume on the network seeing as Bitcoin serves as a store of value and medium of exchange with no earnings. As the chart below shows, taken from the original NVT Ratio article, transaction volume closely follows market capitalization, making dislocations a cause for alarm. The NVT Signal metric was developed in 2018, substituting the daily volume with the 90-day moving average of volume. It created a much more responsive and predictive indicator. 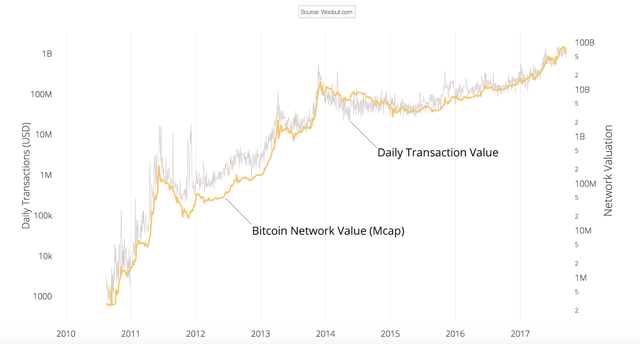 Large dislocations in the ratio indicate that volume on the network does not support current prices. On the NVT Signal chart, any level above 150 usually indicates a market top while any level below 45 indicates a bottom. The chart below shows this indicator predicting that last two bull market cycle peaks. The current NVT Signal level is 104. Though certainly high, it is not at the nosebleed levels typical of bull market tops. 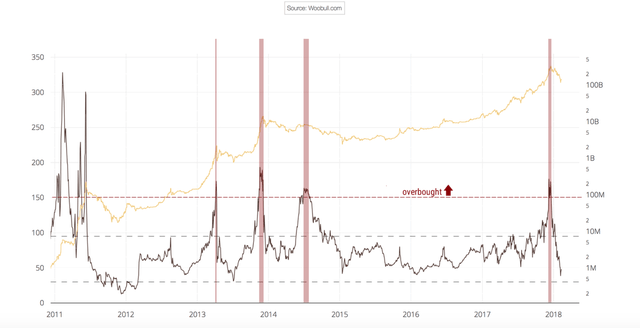 The colored heat map below shows the time windows when a fraction of total Bitcoin was last transacted. It may sound confusing, but the chart itself is rather self-explanatory. Red and orange indicate more recent Bitcoin movement while green, blue, and purple indicate Bitcoin that has not moved in a relatively long time. Tops are typified with heavy transaction volume on the one week to six month time period leading to it. I believe this is caused by Bitcoin whales and smart money selling when all metrics point to an impending top. 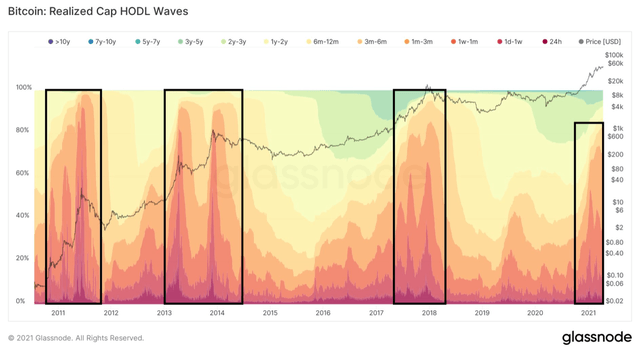 RSI is a momentum indicator commonly used in technical analysis. RSI takes fourteen days of trading data and the average percent gain or loss. It increases with the number of consecutively positive trading days and vice versa. Thirty and below indicates oversold while seventy and above indicates overbought.

The previous three bull markets closed with an RSI of 99, 97, and 97 respectively. Meanwhile, the bear markets ended with values of 48, 43, and 42, respectively. RSI is currently at 89, as the chart below demonstrates. For RSI to reach 95, Bitcoin would have to close at $92,000 by the end of April. 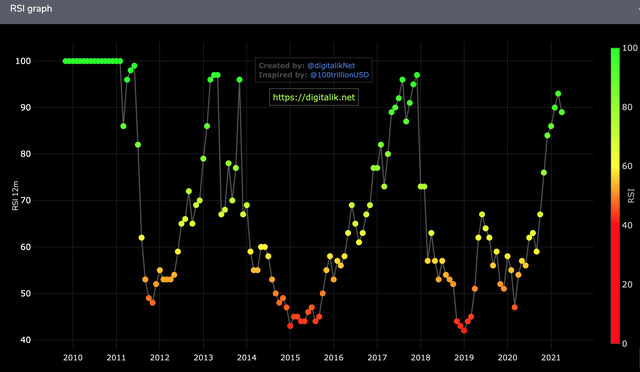 A confluence of metrics points to Bitcoin being slightly overbought, but not near the cycle peak. The recent dip only created a shakeout before a continuation to all-time highs. In my previous article here, I offered a range between $88,991 and $279,830 as the cycle high based on previous cycle analysis alone. Due to this wide range, I do not recommend making arbitrary price targets, as an investor can potentially miss 3x gains by selling at $88,000.

Instead, I recommend monitoring on-chain and technical indicators such as the ones provided in this article. The MVRV-z over 11, the Mayer Multiple over four, the NVT Signal over 150, the one week to one month HODL wave above 11%, and RSI at 97 are all sell signals. Though some metrics are closer to reaching these targets than others, nothing says that now is the top. Until that occurs, this bull market cycle has room to run.