Blueknight Energy Partners (NASDAQ:BKEPP) (NASDAQ:BKEP) looks set to benefit from increased road infrastructure spending. This may help boost its adjusted EBITDA to around $55 million per year before the effect of any acquisitions. That level of EBITDA would support a value of approximately $4.20 per unit for its common units at a 9.0x EV/EBITDA multiple.

Blueknight's Series A preferred units are offering an 8.9% yield currently that looks quite safe due to the stability of Blueknight's asphalt terminalling business and its relatively low level of credit facility debt.

Thus Blueknight may be able to deliver $51 million in adjusted EBITDA for 2021 with corporate savings at the low end of the range for 2021. Blueknight's interest expense is reduced to around $4 million now that it has a lower amount of debt. It reported having $99.9 million in debt on March 4, shortly after the closing of its crude oil business sale.

Thus if we allow $2 million for expansion capex for its asphalt business, Blueknight could generate around $7 million in positive cash flow after distributions in 2021.

Blueknight's longer-term outlook after 2021 looks strong with the federal government likely to significantly increase spending on highways. Both the Senate and House proposals in 2020 included major increases (28% and 42%) in proposed spending. 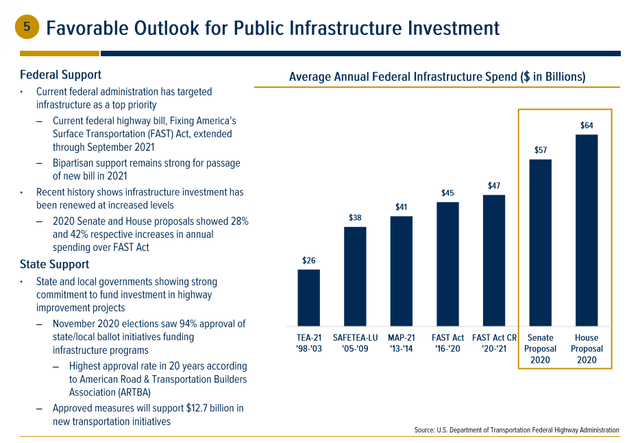 The more recent proposals by the Biden administration and the Senate Republicans both involve significant increases in federal road spending as well, so it appears that the asphalt industry is virtually guaranteed to get a boost. It is just a matter of how much a boost they will get.

The asphalt terminalling business is pretty stable (mostly fixed fee take-or-pay contracts), so organic EBITDA growth may still be fairly modest. I can see Blueknight being able to achieve $55 million in adjusted EBITDA in 2022/2023 though with the government spending more on road infrastructure. 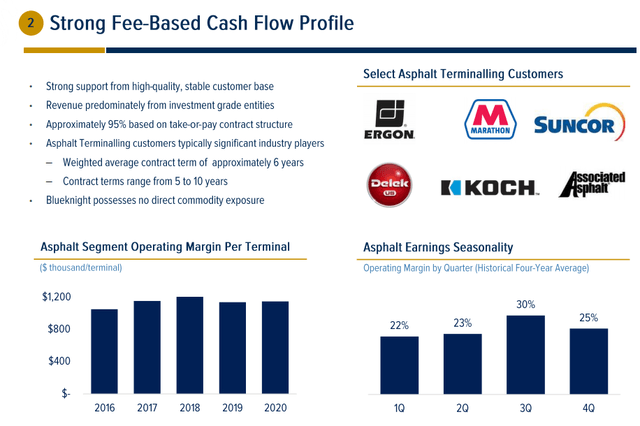 The value of Blueknight's common units is quite sensitive to its multiple though. A 9.0x adjusted EBITDA multiple would increase the value of the common units to around $4.20 per unit. For comparison, Blueknight made a number of asphalt terminal transactions at 9x to 10x EBITDA before, so an 8.5x multiple is on the conservative side.

Blueknight's Series A preferred units are now trading at around $7.99 per unit. This puts their yield at 8.9%, but with the stability of the asphalt terminalling business and Blueknight's relatively limited credit facility debt, the preferred distributions look quite safe. The main risk would be if Blueknight makes acquisitions that boost its debt significantly. At $55 million in adjusted EBITDA, the preferred distribution coverage would be 1.8x.

If Blueknight buys back the three asphalt terminals it sold to Ergon in 2018 then its adjusted 2021 EBITDA (proforma for the acquisition) would be around $61 million, while its distributable cash flow would go to $48 million. This assumes a $90 million purchase price at a 9x EBITDA multiple and $3 million in additional interest costs.

Blueknight's year-end 2021 leverage would be approximately 2.9x in this example, while its distribution coverage increases to 1.5x based on its current distribution.

This would allow Blueknight to potentially increase its common unit distribution to $0.36 per unit per year while also maintaining 1.3x distribution coverage.

Blueknight appears to be in a good position with the potential for increasing investment in roads boosting its outlook over the next few years. A modest improvement to $55 million in adjusted EBITDA would support a value of approximately $4.20 for its common units, assuming a 9.0x EV/EBITDA multiple. Blueknight previously made asphalt terminal dispositions and acquisitions at a 9.0x to 10.0x multiple.

We are currently offering a free two-week trial to Distressed Value Investing. Join our community to receive exclusive research about various energy companies and other opportunities along with full access to my portfolio of historical research that now includes over 1,000 reports on over 100 companies.

Elephant Analytics
9.67K Followers
Author of Distressed Value Investing
Unique insight into distressed opportunities to target outsized returns.
Elephant Analytics has 15 years of analytical experience and unique skills in numerical analysis and practical mathematics. He achieved a top 50 score on the Bloomberg Aptitude Test measuring financial aptitude (out of nearly 200,000 test takers). He has also achieved a score (153) in the 99.98th percentile on the WAIS-III IQ test and has led multiple teams that have won awards during business and strategy competitions involving numerical analysis. In one such competition, he captained his team to become North American champions, finishing ahead of top Ivy League MBA teams, and represented North America in the Paris finals.

Elephant Analytics co-founded a company that was selected as one of 20 companies to participate in an start-up incubator program that spawned several companies with $100+ million valuations (Lyft, Life360, Wildfire). He also co-founded a mobile gaming company and designed the in-game economic models for two mobile apps (Absolute Bingo and Bingo Abradoodle) with over 20 million in combined installs.

Disclosure: I/we have no positions in any stocks mentioned, but may initiate a long position in BKEP, BKEPP over the next 72 hours. I wrote this article myself, and it expresses my own opinions. I am not receiving compensation for it (other than from Seeking Alpha). I have no business relationship with any company whose stock is mentioned in this article.