Revenues have been up and down for the past several years for this data storage notable, and Seagate Technology plc (NASDAQ:STX) has posted another disappointing quarter despite beating consensus estimates on both lines. Specific to Q3-21, revenue was essentially flat on a YoY basis. However, revenues are down 4% for the nine-month period ending April 2, 2021. Moreover, the guidance figure of $2.85 billion for the fourth quarter translates to $10.5 billion for FY-21, or essentially flat over the prior year.

Despite the lackluster performance at the top during Q3-21, the soft outlook, and the historical ups and downs in revenue growth, the stock has appreciated by more than 5% since the earnings call last week, nearly 50% on a YTD basis, and more than 118% since the lows set in March 2020. From that alone, we can surmise that there's more going on than meets the eye at Seagate. What are investors seeing that makes STX buck the trend and keep heading North despite the tepid outlook and uninspiring revenue growth history?

Thesis: The momentum in stock price seems to be coming from internal actions and financial engineering rather than a positive revenue outlook or any other signs that strong growth is imminent. My analysis shows that, in the absence of strong indications of present and future revenue growth, investing at this price poses a not-insignificant risk to investors. HOLD for now, and possibly look at booking your profits while the stock still enjoys the current upward momentum.

The most recent quarter beat estimates at the top and bottom but still came in relatively flat on a YoY basis in terms of net sales, which I assume is why CFO Gianluca Romano highlighted the sequential growth figure of 4% rather than the YoY figure of 0.5% at the Q3-21 earnings call. The preceding quarters, Q1-21 and Q2-21, themselves showed negative growth of 10.2% and 2.7%, respectively, which doesn't say much for Q3-21.

Regardless of the situation at the top, the stock has a lot of momentum under it right now. So where is this momentum coming from?

On a YTD basis, the company has invested over $1.8 billion toward repurchasing 31 million shares, which is more than double what the company had invested last year, by Q3-20. This is likely to have been one of the contributors to share price appreciation over the past two quarters, during which the stock has rallied by nearly 80%.

While this has been a good run for existing investors, it puts the stock's current valuation at a trailing price to earnings multiple of over 22.5 against the under-13 figure it was at the beginning of the six month period under consideration. But this is really where the kicker comes in. Despite the solid run from slightly above $50 to nearly $90 in the last six months, the stock is still trading significantly lower than peers like Western Digital (WDC) and NetApp (NTAP).

Furthermore, if you look at the forward earnings multiple, STX's figure of under 17 looks more attractive than NTAP's +19 and WDC's +22.

So far, it looks like good value. But that's not the whole story.

Another factor that makes this appear to be a worthwhile consideration for your portfolio is the dividend yield: even at this elevated level of share price, the yield is an attractive 3.2%. The payout ratio of about 50% is a little high considering that long-term debt is currently at around $5 billion, but the company's EBIT to interest payments on its debt is at a healthy level of around 6.5x. In addition, the free cash flow figure of $274 million for Q3-21 was up marginally from $260 million in the year-ago period and the company still had $1.2 billion in cash and cash equivalents as at the end of the third quarter. The only point of concern here is that cash is down but debt is up on a YoY basis. Nevertheless, the adequate coverage makes the dividend relatively stable for now.

Yet another driver of share price has been the bottom line. For Q3-21, the company reported adjusted diluted earnings of $1.48 and GAAP earnings figure of $1.39 per share, representing YoY growth rates of 15% and 24%, respectively. The company beat both consensus figures, by 16 cents and 26 cents, respectively, and expects non-GAAP diluted earnings per share of $1.45 to $1.75 for a midpoint of $1.60 against the consensus estimate of $1.54 for Q4-21.

The earnings beat in Q3-21 combined with the positive earnings outlook for Q4-21 has further helped support share price momentum, which is why we probably haven't seen more than a very marginal 'knee-jerk correction' on the soft revenue outlook for Q4-21. That shows that the market is decidedly optimistic on the stock.

But Where Are The Forward Growth Drivers?

Despite the three factors that have contributed to the stock's price appreciation over the past six months, any long-term momentum can only come from sustainable growth at the top.

However, if you look at Seagate's largest segment, HDD, you'll notice that the segment isn't growing. The Q3-21 sales figure of $2.5 billion, the bulk of total sales, is down from the year-ago period, albeit by a marginal 1%. The sequential growth figure of 3% is relatively meaningless here because seasonal trends have been disrupted over the past year.

The other segment, which is Enterprise Data Solutions, SSD, and Other, is showing impressive YoY and QoQ growth in the neighborhood of 20% but represents less than 9% of overall revenues.

If you look at revenues by channel, it's clear that growth is nominal and only coming from the Retail segment rather than OEMs or Distributors. I see this as a major risk factor when coupled with the dynamic that we're seeing in the stock's price over the past few quarters.

I'll admit that there could be a short-term play here where a new investor can make money; however, if you're a risk-averse investor, this is probably a good stock to stay away from at this point. The +3% dividend yield does look attractive, and the momentum in price appreciation from repurchases, the dividend, and bottom-line gains give a bullish thesis some substance, but the risk from uncertain future growth can't be ignored.

My inference from the analysis above is that there aren't any strong signs of growth in the HDD segment despite the fact that the company's major clients in the CSP (cloud service provider) space are all growing their capacities at a rapid rate due to the elevated levels of demand. All three majors have announced new availability regions and infrastructure growth for 2021 and beyond. If you're curious, here's some relevant data for Microsoft's (MSFT) Azure, Amazon's (AMZN) AWS, and Alphabet's (GOOG)(GOOGL) Google Cloud Platform - Azure | AWS | GCP.

I don't usually put much stock in market projections, but they do help in terms of cross-validating growth trends. Various sources project cloud storage market CAGRs in the range of over 20% for the next several years: Mordor Intelligence - 25%; Market Data Forecast - 24%; Markets and Markets - 22%.

In light of the aggressive growth and elevated demand levels, I would expect Seagate, a significant player in the storage market, to be growing at much stronger levels. It is not. Indeed, CEO Dave Mosley's prepared statements at the Q3-21 earnings call allude to much stronger growth rates than the actuals:

Strong cloud data center demand and ongoing recovery in the enterprise markets drove our highest ever HDD sentiments of 140 exabytes, a record mass capacity revenue of more than $1.6 billion. These trends underscore the strong secular demand dynamics we are seeing in the mass capacity markets, and support our outlook for the TAM to more than double by 2026 to roughly $26 billion.

Although that's an uplifting message, it doesn't reflect on Seagate's own revenue trends, and that's what worries me. The surge in demand started shortly after the pandemic began, but Seagate took a long time to recover from the initial YoY quarterly revenue decline that began in Q1-21. And with Q4-21 and full-year estimates coming in soft, this stock might not offer the kind of risk-to-reward profile you're looking for as a new investor. 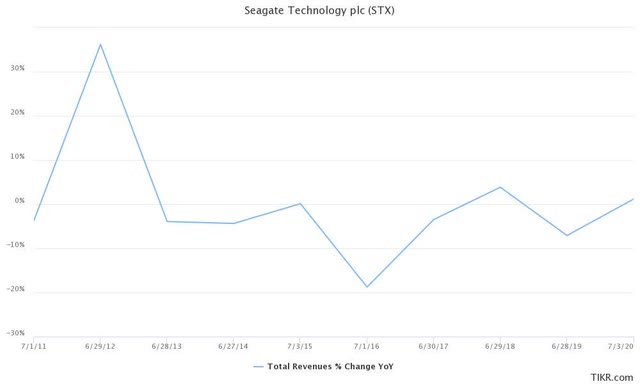 When you combine all that with shaky revenue growth over the past several years, the risk level is simply too high to recommend a buy right now. Sell-side analysts, as reported by WSJ, currently have a price target of $86.18 for STX, indicating that the stock has a downside potential of 3% at the current as-of-writing price of $89.15.

Beulah Meriam K
3.31K Followers
I do deep-dive analyses into the top companies in multiple segments, including retail, consumer goods and technology.