I last wrote on Bancolombia in January 2021 determining that Colombia’s largest bank was undervalued and offered solid upside with a decent margin of error. Since then, there have been a series of developments in Colombia which are weighing heavily on the economy and Bancolombia’s short-term outlook. After the Duque government attempted to introduce a controversial tax bill, which has since been rescinded, Colombia has been wracked by violent protests across major cities. Those protests have been running for roughly two weeks and no longer are solely expressing resentment toward an ill-timed tax hike that would have increased the financial burden for many Colombian. They are being driven by a wide range of grievances including widespread corruption, rising violence, increased poverty, police brutality and the failure of the Duque administration to implement the 2016 FARC peace agreement.

This is in stark contrast to U.S. stocks which have rallied sharply since late 2020 to be regularly crossing record highs. That has sparked considerable speculation that now is the time to buy Bancolombia which has built a solid regional franchise and deliver some solid first quarter 2021 results.

The latest quarterly results represent a significant improvement over the previous quarter and for the same period a year earlier. First quarter 2021 net income of $144 million was a significant improvement over the previous quarter’s $71 million loss. It was also almost 62% higher than for the same period in 2020. Earnings per share shot up to $0.61, a significant improvement over the fourth quarter 2020 loss of $0.32 and nearly double the $0.34 reported for the same period in 2020. That notable improvement in the bottom-line was driven by a 37% quarter over quarter and 7% year over year decrease in net provisions and a notable increase in fee and dividend income. A sharp reduction in interest and total operating expenses was also a key driver for the improved bottom line. First quarter 2021 interest expense fell 12% quarter over quarter and 28% year over year to $290 million, while total operating expense of $528 million was 4% and 7.5% lower, respectively. Those numbers indicate that the tempo of operations was on track to return to pre-pandemic levels.

Nonetheless, first quarter 2021 net interest income of $748 million while being an impressive 26% greater than the equivalent period a year earlier was still 3% lower than a year earlier. This indicates that Bancolombia is struggling to grow its core lending business, although in response to the harsh operating environment it has successfully cut costs, which when the economic environment returns to normal will bolster profitability. The inability to expand its core banking portfolio is evident from first quarter 2021 net loan growth despite being 3% higher quarter over quarter plunging by 6% in value year over year. Deposits were flat only gaining 2% compared to a quarter prior and only by a paltry 0.18% compared to a year earlier.

Sluggish loan growth along with a declining net interest margin, a key measure of profitability for its core lending business, is weighing on Bancolombia’s profitability. For the first quarter 2021, the institution’s NIM was 5.1% a healthy 1.1% increase over the previous quarter’s 3.99% but it was still lower than the 5.56% reported a year earlier. This is impacting profitability and there is the likelihood of Bancolombia’s NIM remaining under pressure because of Colombia’s central bank considering easing monetary policy to stimulate economic growth.

The impact on Bancolombia’s performance becomes clear when considering its key profit metrics for the first quarter 2021. Return on assets was a meagre 0.85%, which while higher than a quarter prior and the same period a year earlier is still significantly lower than U.S. banks and the level considered optimal. Bancolombia’s quarterly 8% return on equity was also disappointing despite being significantly higher than the -4% posted for the previous quarter and double a year earlier. Both metrics indicate that Bancolombia not effectively managing its capital or assets which can be primarily attributed to a very difficult operating environment which existed before the pandemic emerged.

There are signs that Bancolombia’s credit risk remains high, further weighing on its performance, despite the 90-day past due loan ratio for the first quarter 2021 falling 0.16% quarter over quarter to 3.65%. That ratio is 0.61% higher than for the same period a year earlier, indicating that credit quality remains under pressure. It is consumer and then commercial loans which have experienced the highest year over year growth in 90 day past due loans.

There has also been a sharp uptick in allowances for loan losses, which for the first quarter 2021 reached $4.1 billion an almost 3% increase compared to the quarter prior and a massive 37% increase over the same period in 2020. Those numbers indicate that credit quality is under pressure and loan loss allowances are draining capital that can be deployed for revenue generating activities.

The current state of play regarding Bancolombia’s credit risk is a direct result of the fallout from the COVID-19 pandemic and Bogota’s five-month long 2020 lockdown aimed at containing the virus. There are concerns that credit risk and profitability could deteriorate further because of further economic hazards and heightened political turmoil. The poor state of Colombia’s economy, which shrank by 6.8% during 2020, is weighing on Bancolombia’s performance. This was further amplified by the poor performance of Latin America as a whole, where the combined regional economy contracted by 7%. That poses a direct risk to Bancolombia being able to recover from the pandemic and unlock value for investors.

The IMF predicted Colombia’s economy would expand by just over 5% during 2021, which accords with other estimates of 4% to 5.5%, but there are signs that this is under threat. A third viral wave is sharply impacting Colombia with Bogota returning many major cities to partial lockdowns while political turmoil, rising violence and countrywide civil unrest are further weighing on the economy. Not only has the national government in Bogota been able to fully restart the economy but the latest round of lockdowns is weighing heavily on Colombia’s economic outlook. If they are sustained for a lengthy period, it is difficult to see how GDP will grow by 5% or more during 2021.

Much of the optimism which emerged in early 2021 has declined sharply with the advent of a third viral wave, a sharp increase in political turmoil and heightened civil dissent against the Duque regime. The latest protests were sparked by Duque’s ill-timed and poorly structured tax reform bill which the government hoped would raise urgently needed funds of around $4 billion to plug the ballooning budget deficit and stabilize Bogota’s finances. There were concerns, if implemented, the proposed tax hike would damage Colombia’s economic recovery, deter urgently needed foreign investment and impair corporate credit ratings.

While the package has now been withdrawn, it has sparked ongoing protests in Colombia’s major cities which have seen considerable violence and forced authorities to introduce local curfews. The protests which are in their second week are expected to continue for some time with a range of deep-seated grievances are driving them. Those will impact the economy as well as consumer and business sentiment.

For these reasons Colombia’s economy is not performing as strongly as expected. Increased government spending coupled with falling fiscal revenues saw the finance ministry predict a massive 2021 budget deficit of over 9% of GDP, which is significantly larger than the 7.8% reported for 2020 when the economy shrank by 6.8%. A sharply weaker Colombia peso, which has fallen 10% since the start of 2021, is weighing on government finances including increasing the cost of U.S. dollar denominated debt. This is also driving a sharp increase in inflation, further weighing on business and consumer spending which will impact 2021 GDP growth. Unemployment in Colombia remains high, hitting 14.2% for March 2021, whereas poverty has soared since the end of 2018. Government statistical data shows that by the end of 2021 42.5% of Colombians lived in poverty compared to just under 35% at the end of 2018. These developments will weigh on the performance of Colombia’s economy during 2021 impacting the results of the Andean country’s major banks including Bancolombia and Grupo Aval.

Those events mean that Bancolombia’s earnings growth for the immediate further will likely remain flat, explaining why the stock has lost nearly 24% since the start of 2021. While there is plenty of bad news surrounding the outlook for Bancolombia it does appear very attractively valued after the latest stock price plunge. Bancolombia is currently trading at just under one times its book value, well below that ratio for many other regional banks operating outside of Colombia. 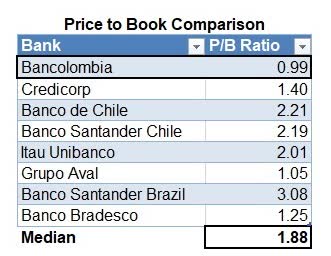 The average price to book ratio (excluding Bancolombia) for its Latin American peers comes to 1.88, slightly higher than January 2021 when I last wrote on Bancolombia because of regional bank stocks rallying, indicating that with a ratio of 0.99 Bancolombia is undervalued compared to the market. Bancolombia’s book value per share has increased since my last article by 10% to $32.39 per share. If the institution’s price to book ratio was 1.88, it would have a market price of $60.89 which is almost double the $30.71 per share at the time of writing. That indicates that Bancolombia is deeply undervalued and that there is a significant margin of error for investors.

Nevertheless, for the reasons discussed earlier, including considerable domestic political and social turmoil in Colombia, it will take some time, likely in excess of two years, for Bancolombia to rebound and reach that price. Firmer oil prices, a key driver of Colombia’s economy and the value of the peso, bodes well for the country’s economic outlook. That is, however, being overshadowed by the latest civil unrest, pandemic lockdowns and security crisis. A more accurate one-year price target, after factoring in an 8% risk premium in accordance with emerging markets valuation methodology, is $56 per share. This appears achievable if the turmoil engulfing Colombia ends and Bogota is able to restart the economy.

The latest events in Colombia are weighing heavily on the economy and the peso impacting the outlook of the Andean country’s major banks. There is every likelihood that Latin America’s fourth largest economy may be over the worst of the pandemic, civil unrest and economic decline. That means Bancolombia is heavily undervalued after being sold off by the market due to a perceived increase in risk and a significantly softer peso. Colombia’s leading financial institution, after applying an additional risk-based discount, has a one-year price target of $56 per share, which is 79% greater than the current market price for its ADRs. While waiting for Bancolombia’s stock to rebound investors will be rewarded by the regular annual dividend yielding 3%. That payment is subject to a 10% withholding tax levied on dividends paid out of full taxed profits reducing the yield to around 2.7%.

Inversiones Apartado
319 Followers
Colombian, lawyer, risk manager, consultant, full-time investor. Long only, focused on commodities and infrastructure in Latin America.Disclosure: All articles are my opinion and they should not be construed as advice to buy or sell any securities. Investors should perform their own due diligence and if necessary consult a financial adviser before trading.