The JPMorgan U.S. Dividend ETF (NYSEARCA:JDIV) is a fund that uses a bottom-up, rules-based approach to select the best stocks based on a combination of both volatility and risk. It is a relatively new offering, launched less than four years ago in November 2017, that hasn't yet caught on, as evidenced by its low $26 million in assets under management. After analyzing the fund, though, I find it defensive in nature and will likely outperform in bear markets. This feature is attractive, especially as major indices continue to hit new highs. However, the dividend ETF space is a crowded one, and JDIV doesn't stand out. I'm remaining neutral for now and would recommend selecting more established ETFs that have similar sector compositions.

JDIV's investment approach is best summarized in its latest annual report, as follows:

In essence, it looks for high-yielding stocks but attempts to control for risk within each sector. This process results in a reasonably high level of diversification with its 240 holdings spread out over all 11 sectors and 86 different industries. The Utilities and Consumer Staples sectors both have a 16.7% allocation, while more volatile sectors like Energy are given less weighting. 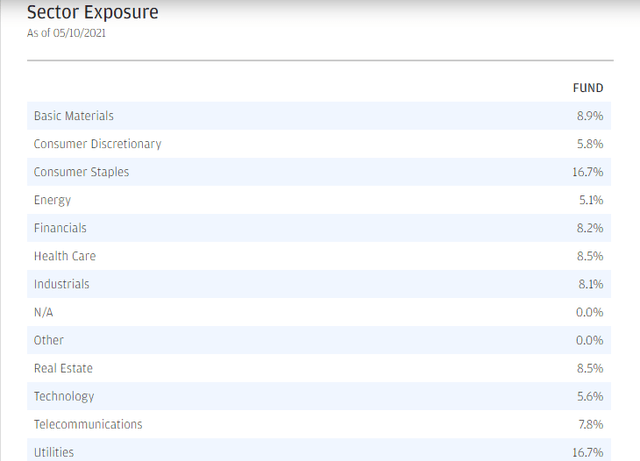 The top ten holdings are listed below, which account for just 7.19% of its total. 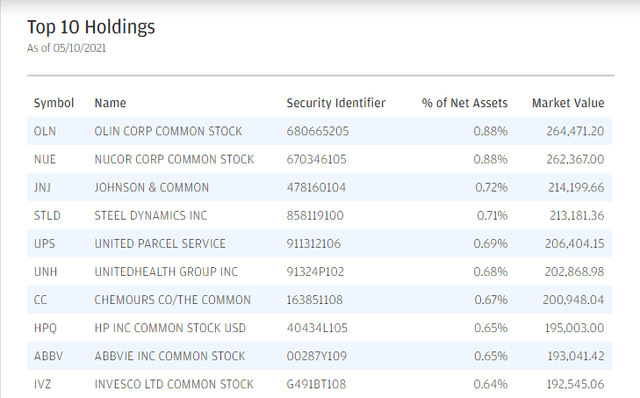 JDIV has an expense ratio of 0.12% and is currently yielding 3.36% on a trailing twelve-month basis. Its dividends are paid quarterly and have been inconsistent thus far. The chart below shows its dividend history, which I have verified to be accurate with JPMorgan's numbers. These don't look like solid dividend growers. I have calculated the weighted-average five-year dividend growth rate to be 4.99%, which is far less than ETFs based around the Dividend Achievers or the Aristocrats. Seeking Alpha's Dividend Growth Grades confirm this, with over half of its constituents receiving a grade of C+ or below. 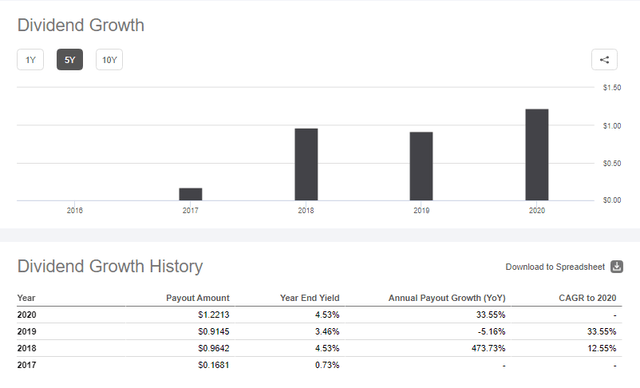 The graph below shows that JDIV has significantly underperformed its Russell 1000 benchmark, a collection of large and mid-cap securities comprising about 90% of the total U.S. market capitalization. The risk was not controlled well either, contrary to the fund's objectives. Granted, the drawdown was not long-lived, and the fund hasn't really been tested yet.

JDIV has had higher total risk (standard deviation), a higher maximum drawdown, and worse risk-adjusted returns as measured by the Sharpe and Sortino ratios. Given this history, I would suggest that there must be a very compelling reason to trust the fund's proprietary methodology suddenly, so let's take a closer look at its components next.

While no holding is significant, JDIV holds 22 regulated electric utility companies totaling 11.03% of the fund. These are almost all low-volatile stocks, too, with the average two-year and five-year betas being 0.86 and 0.70, respectively. This metric means that over time, you can expect them to rise and fall less than the market. The tradeoff is that most haven't, and aren't projected to, grow very much in the next year. The forward one-year revenue growth rate is only 1.31%, so it's a good idea to be selective with these companies. Relatively speaking, JDIV has accomplished this. The average price is 7.71% higher than its 200-day moving average for this industry, compared to 13.60% for the Russell 1000 ETF (IWB).

JDIV's REITs are diversified across the retail, mortgage, health care facilities, hotels, office, and residential industries. In total, there are 29 different holdings, and almost all are trading near their 52-week highs. This may be beside the point, though, as the industry was among the hardest hit at the beginning of the pandemic. The graph below shows the recent performance of this subsector, equal-weighted and rebalanced monthly. These REITs have fully recovered to pre-pandemic levels, which is quite a feat considering the uncertainty ahead.

JDIV includes 17 companies in the Packaged Foods Industry which total 6.96% of the fund. These industries are risky today because of price increases across virtually all areas of the supply chain. To date, companies have successfully passed off these higher costs to consumers, but this will only last so long. Food industry analyst Phil Lempert summarizes what the industry is going through nicely in this article from Food Dive.

The good news is that JDIV has a high allocation to the Consumer Staples sector, including Household & Personal Products, Farm Products, and Tobacco. These companies sell items consumers need, so they'll likely act defensively if the economy goes south.

To give you an idea of how vital sector diversification is in the event of a market downturn, consider how they performed during the five most significant drawdown periods in the last 15 years (assuming an investor maintained an equal-weight portfolio in each sector).

As shown, JDIV's largest sectors (Consumer Staples and Utilities) fell the least on average (10.51% and 9.58%, respectively, versus 21.71% for the equal-weight portfolio). There are many defensive qualities in this fund, but they have yet to be revealed due to its short history.

I like that JDIV is a low-cost ETF that is overweight Consumer Staples and Utilities - two sectors that have historically done much better than the broad market during drawdowns. A drawdown is what investors may face next, as threats of consumer price inflation and, in turn, rising interest rates put the brakes on the current bull market. However, I can't recommend a fund with a proprietary methodology that hasn't been tested yet in these uncertain times. There are better options out there. One is the SPDR S&P Dividend ETF (SDY), which I just finished reviewing. Like JDIV, SDY has high allocations to Consumer Staples and Utilities along with a healthy allocation to REITs. It has also been around since 2005. A track record and transparency counts, and JDIV lacks both, so while I think it will outperform during the next downturn, it's just smarter right now to go with what you know.