Bellicum Pharmaceuticals (NASDAQ:BLCM) has been a horrid mark in my speculative portfolio over the past couple of years. Despite my risky attempts to improve my cost average, I have struggled to scrape some profit on spikes in the share price. The company has changed its operations and pipeline strategy multiple times over the past few years, it has been hard to determine a good valuation for the stock. I am no longer interested in struggling to obtain a good cost average and spending too much time trying to determine where the company is heading. Regardless of the company’s plans for its pipeline, I believe the company’s technology is worth way more than the company’s current market value of ~$27.5M. Therefore, I am looking to make one more attempt at reloading BLCM and will hold those shares for a long-term investment win, lose, or draw.

My original BLCM thesis was focused on the company’s cutting-edge cell therapy technology and pipeline programs. The company’s GoCAR platform is unique to other cell therapies in two ways. To start with, GoCAR is projected to be more potent and durable when matched against the contemporary group of cell therapies. 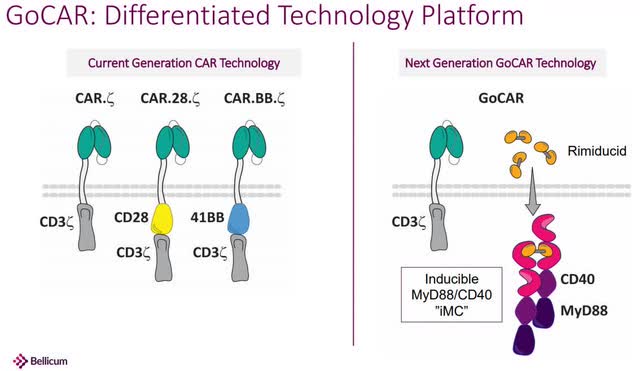 These distinctions could make Bellicum’s therapies superior to the current cell therapies. 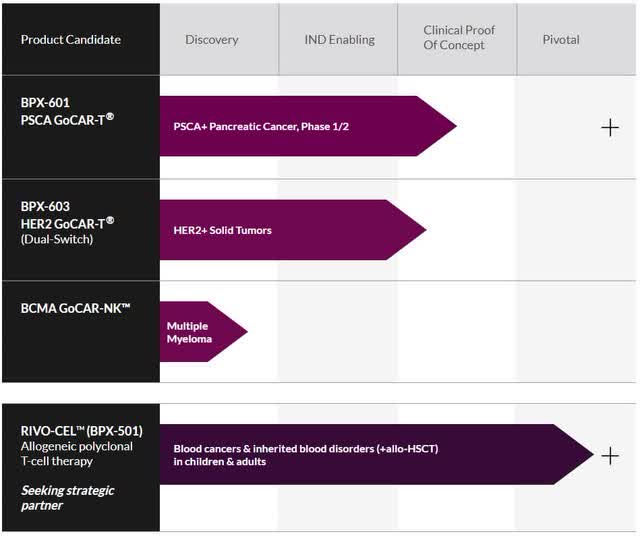 In addition to the company’s GoCAR programs, Bellicum had their lead product, RIVO-CEL, an allogeneic polyclonal T-cell therapy for allo-HSCT. The company had RIVO-CEL on the home stretch for approval but decided to seek a strategic partner to finish the endeavor.

At this time, I was extremely bullish on the ticker due to the immense potential from the company’s pipeline and the possibility of expansion. I believed the company’s technology could be one of the most cutting-edge cell therapies in development.

Sadly, my thesis fell apart once the company decided to sideline RIVO-CEL and focus on their GoCAR programs. Undeniably, the GoCAR programs are the bankrollers, but the fact that RIVO-CEL was only a few quarters away from a European approval really knee-capped my game plan. The company was setting up a commercial team in Europe and was ready for a quick launch, but the company threw in the towel in the final rounds. Perhaps the company realized the reimbursement and payer landscape in Europe was not going to support a successful launch. Whatever the reason, the company went from being incredibly close to commercialization to going back to Phase I clinical trials and preclinical work. I was expecting RIVO-CEL to bring in some revenue and help fund the company’s GoCAR programs. Now, we don’t know if RIVO-CEL will be a complete loss and the company will have to ask shareholders to flip the bill to fund the current programs.

Bellicum went from almost pulling in some cash… back to incinerating cash. My original thesis was smashed.

Bellicum has streamlined in an attempt to reduce OpEx and focus the GoCAR-T programs. Admittedly, I was struggling to reformulate a thesis because it appeared as if the company was trying to wind down rather than ramp up. Is the company looking to survive or compete?

These decisions killed the share price enough to turn BLCM into an extremely discounted ticker. BLCM’s market cap fell under $50M, which was under its cash position and the company could potentially sell RIVO-CEL for more than $50M. What is more, the company’s platform technology was easily worth more than $50M due to its ability to improve the safety and efficacy of cell therapies, so a partnership could occur at any moment. Essentially, any positive update from the pipeline or RIVO-CEL could have easily doubled or tripled the share price… For me, the risk-reward profile definitely justified a speculative long position. 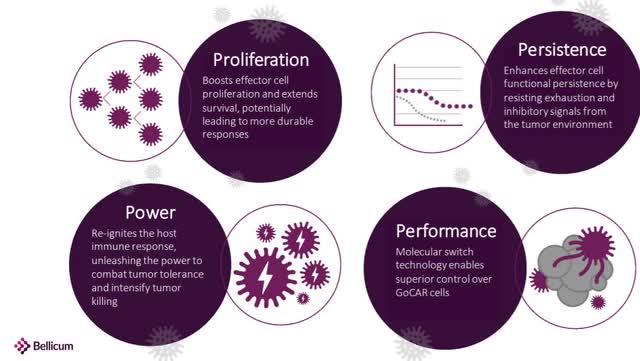 I still believe the company’s dual-switch tech will attract lucrative collaborations or entice a suitor to acquire the company at a sensible price. Looking at Figure 4, one can see how the company's technology could be a great asset to employ in cutting-edge cell therapies.

After multiple revamps to my thesis and attempts at holding a long-term position, I have finally conceded that my approach to BLCM needs to change with the company’s trajectory. I have been lucky to squeeze out some profitable trades and improve my cost average, but I am using too much time and energy trying to play chess with BLCM when I need to be playing checkers.

I have to accept that it is unlikely Bellicum is not going to be a commercial company anytime soon, and the company is going to burn through its ~$37M in cash and cash equivalents in the next year or so. Consequently, I am going to reload my BLMC position one more time in anticipation the company will ultimately close at least one major deal in the next couple of years that will drastically change its fundamental outlook. 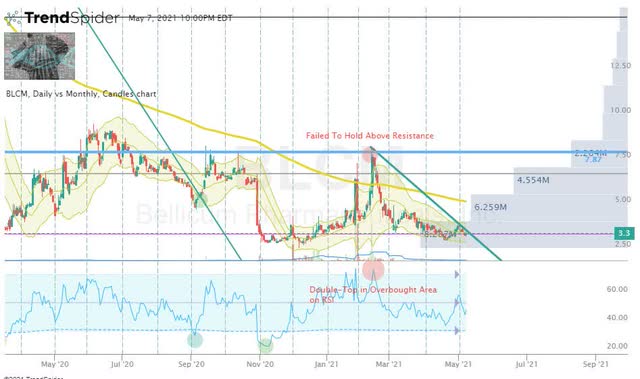 My plan is to add to my position in the coming days as BLCM is coming into an area of support and a volume shelf (Figure 5). The healthcare sector continues to sell off with the NASDAQ, so once the selling pressure subsides, I will make one more small addition. Subsequently, I will fill out my sell orders in order to bank some profit on spikes in the share price. However, I will leave a small “house-money” position for at least five years in anticipation Bellicum's management will find a way to monetize their dual switch technology or the company will be acquired at a suitable valuation.

Considering BLCM is an ultra-speculative ticker, I must accept the fact I can lose the majority of my investment. Without a transformative deal, the company's financials will continue to hemorrhage and the share price will follow suit.

Disclosure: I am/we are long BLCM. I wrote this article myself, and it expresses my own opinions. I am not receiving compensation for it (other than from Seeking Alpha). I have no business relationship with any company whose stock is mentioned in this article.