Just recently, I covered the Campbell Soup Company (CPB), which I believe is not an option for investors looking for growth in the consumer staples industry. As a result, I started to look for alternatives besides the one mentioned in the CPB article. In this article, I will give you another alternative. The Ohio-based Lancaster Colony Corporation (NASDAQ:LANC) is a small but experienced player in the industry with a focus on established brands and growth initiatives through licensing. The company is flying under the radar despite the fact that it's one of America's few dividend kings with more than 50 consecutive annual dividend hikes. In this article, I will tell you why I believe the company is a good investment despite its lofty valuation.

LANC has a market cap of $5.1 billion, which makes it one of the smallest players in the packaged foods industry. Founded in 1961, the company has exposure in three, almost equally large segments:

Roughly 46% of total sales are foodservice sales. The company operates 16 production facilities in nine states where it employs roughly 3,100 employees.

When it comes to long-term dividend investing, my main priority is to find a way to efficiently benefit from an ever-increasing economy (meaning GDP). There are many ways to accomplish this. However, it is very important to gain exposure and diversify in various industries. LANC gives us exposure in the very anti-cyclical consumer goods industry and the more cyclical restaurant business. Especially in the latter, I prefer to buy suppliers as I dislike the deadly competition between restaurants (low entry barriers). According to LANC, the company supplies 19 of the top 30 national restaurant chains.

On top of that, the company - like all of its competitors - has a long history of acquisitions. The company relies on both organic and acquired growth as it has very healthy free cash flow to finance larger acquisitions. In the end, that's what generates most shareholder value. 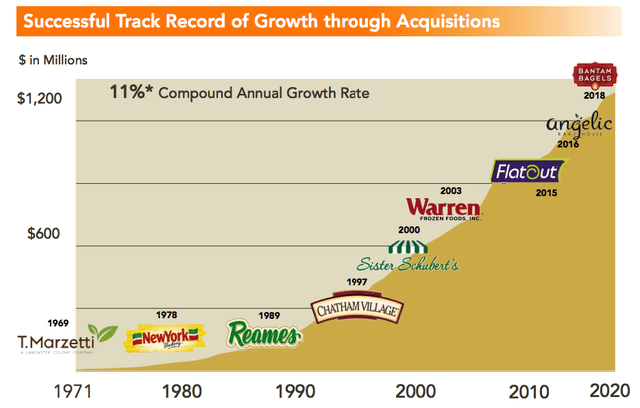 On a long-term basis, the company is able to grow its sales and EBITDA. Using 2004 as a reference point, we're dealing with below inflation (2% Fed target) growth rates. However, after the Great Financial Crisis, the company engaged in a number of very successful strategic acquisitions, resulting in healthier growth (see graph below). 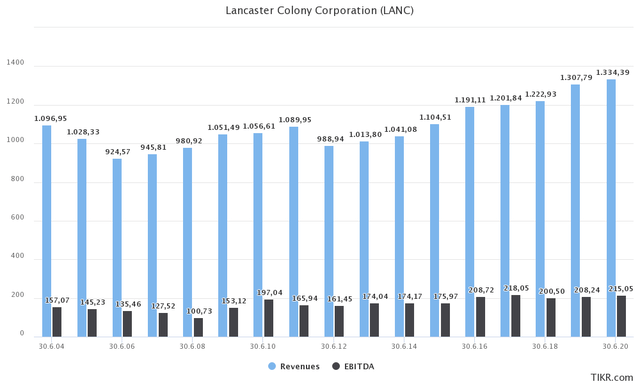 The fact that LANC is a slow-growing business and competing in a very tough industry makes this company very prone to input inflation. For example, keeping prices attractive is always important to combat generic brands and peers - also, new entrants. Once you get input inflation, you're more or less forced to raise prices or to absorb the shock yourself by coping with lower margins.

With this in mind, the company is doing very well compared to its peers. The company has a 14.2% return on assets (top 3), 13.8% operating margins, and a double-digit profit margin. On top of that, the company has zero financial debt, which in addition to satisfying margins makes it easier to operate a business model based on acquired growth.

And speaking of growth, the company is currently expanding in Kentucky, where the company is adding 192 thousand square feet to an existing facility. This provides the company with processing and warehousing capabilities to support growth in dressing and sauce products in both the retail and foodservice segments.

These products include licensed sauces from Chick-fil-A and Buffalo Wild Wings (BWLD). The first batches have been sold in March (often pilot tests) and I expect these sales to do well given the popularity of the brands.

Based on this context, the company is expected to incur higher-than-average capital expenses as a result of this project as the graph below shows. However, it will also fuel total EBITDA while free cash flow (operating cash flow minus capital expenses) is expected to remain steady. While I don't have the data going beyond 2022, it is highly likely that annual free cash flow will grow to $140 million over the next few years. 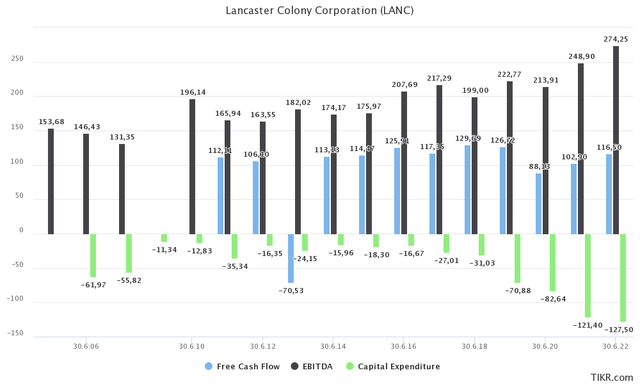 Currently, the company isn't only debt-free but has roughly $190 million in net cash. This means that the company is able to spend most of its free cash flow on shareholder distributions. On a TTM basis, the company has spent $80 million on dividends and slightly less than $9 million on repurchases. As a result, LANC was able to generate 6.8% average dividend growth per year since 2004, which is remarkable given its slow growth in sales.

The only problem I see right now is the fact that the company is currently yielding 1.6%. That's below 2.7%, which is the yield of the Consumer Staples ETF (XLP). Therefore, investors get a lower yield without the benefit of diversification, which is what you get when buying an ETF. However, the good news is that LANC has outperformed XLP by a mile. On a 10-year basis, the total return is 308%, which is 120 points above the XLP total return. It gets wilder when going back more than 10 years.

That's why I am not bothered by the current valuation. Right now, LANC has a market cap of $5.1 billion, $190 million in net cash, and $250 million in expected EBITDA. That's a valuation close to 20x EBITDA.

Keep in mind that the company's longer-term valuation range has been in an uptrend as investors are increasingly betting on higher growth. That's fine as that seems to be the case right now - and going forward. Keep in mind that the company's yield has been unchanged since 2016 as the stock price has risen at the same pace as dividend growth. I expect this to continue.

LANC is a great long-term investment. The company is flying under the radar because of its relatively small market cap and its below-average yield in the industry. Nonetheless, this company started paying a dividend shortly after it was founded and has raised it every single year - resulting in a dividend king status. While its industry is making fast growth hard, the company has the ability to continue strong dividend growth thanks to plenty of free cash flow and the expansion of its facilities and product line.

The stock isn't cheap and I doubt the stock will become cheap anytime soon. The best way to play this stock is by buying a small starting position and adding to it consistently (i.e., every quarter).

Based on everything mentioned in this article, I have little doubt that this company will deliver value for decades to come.

(Dis)agree? Let me know in the comments!