Women and cats will do as they please, and men and dogs should relax and get used to the idea.”― Robert A. Heinlein

Today, we revisit an "old friend" for the first time since we highlighted the shares in April of last year after recommending the stock for inclusion into the model portfolio of the Insiders Forum a month prior. We sold out of Myovant Sciences (NYSE:MYOV) late in 2020 after the stock more than tripled in less than nine months in our model portfolio. The stock is down slightly from that exit point, and given recent events around the company, it's time to circle back on Myovant. A full analysis and recommendation are below. 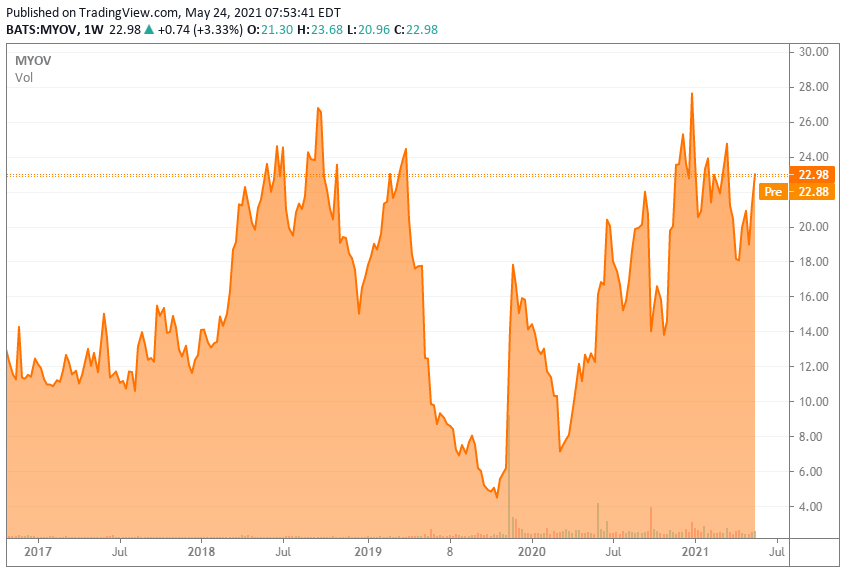 Myovant Sciences is a United Kingdom-based healthcare company that IPO'd in 2016. The company seeks to change the lives of men and women for the better by designing therapeutics that target uterine fibroids, endometriosis, prostate cancer, and infertility. The company’s lead product candidate is Relugolix, which is being developed as a combination therapy to treat symptoms of uterine fibroids, and symptoms of endometriosis. Additionally, the company has another clinical asset called MVT-602, which is designed to treat female infertility as part of assisted reproduction. In 2016, Myovant entered into an agreement with Takeda Pharmaceuticals International (TAK) for the exclusive, worldwide license, excluding Japan and other Asian countries, to develop Relugolix and MVT-602. Myovant Sciences currently has a market capitalization of approximately $2.1 billion and trades for right at $23.00 a share. 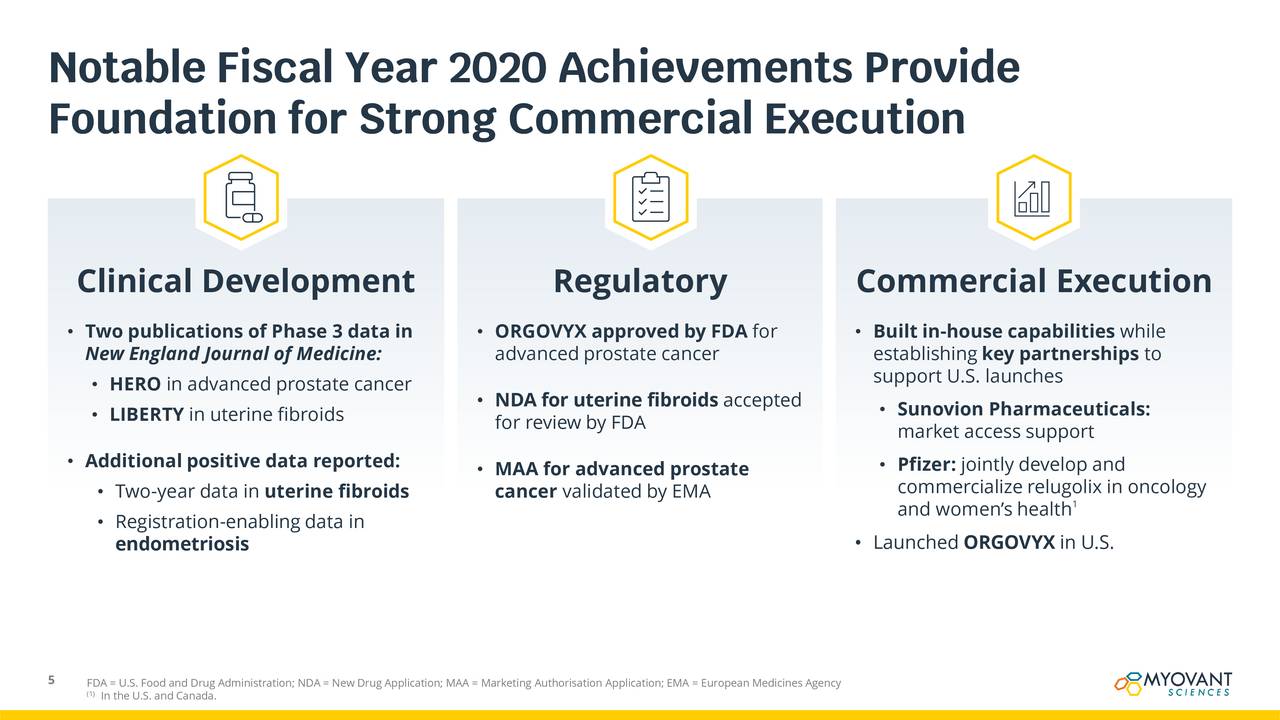 Relugolix is a small molecule, GnRH receptor antagonist. The drug works by binding to and blocking the GnRH receptor in the anterior pituitary gland. Blocking GnRH receptors decreases the release of gonadotropins, decreasing the downstream production of estrogen and progesterone by the ovaries in women and testosterone in the testes of men. The drug is currently being developed as a combination therapy for the treatment of symptoms of uterine fibroids and symptoms of endometriosis. The combination therapy is administered orally and consists of Relugolix 40 mg in combination with estradiol 1.0 mg and a progestin 0.5 mg. 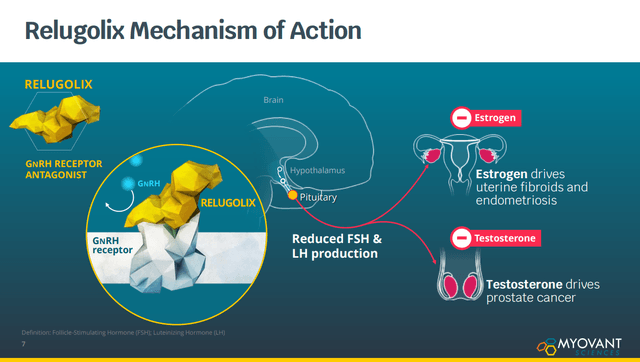 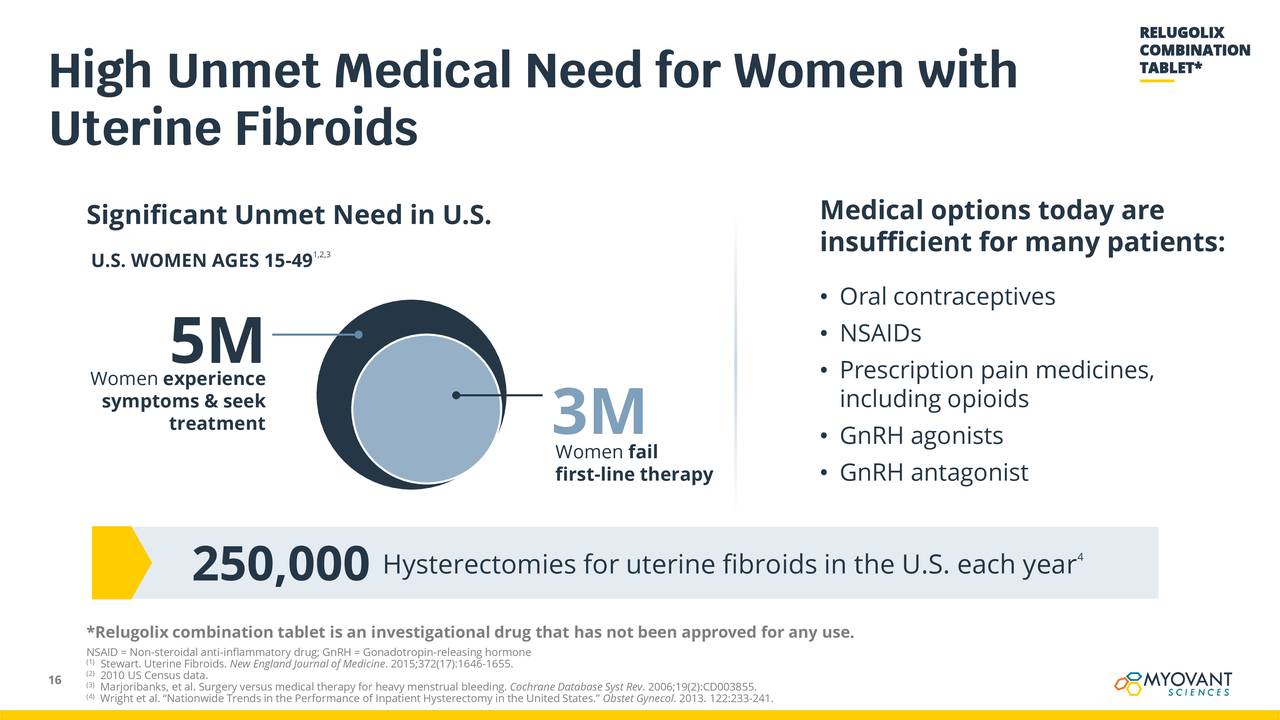 Turning toward the SPIRIT program, the company is getting ready for an NDA submission in Relugolix combination for the treatment of women with endometriosis. In October of 2020, data from the replicate Phase 3 SPIRIT 1 and SPIRIT 2 studies were presented at the ASRM 2020 Virtual Congress. Both trials were highly successful, meeting all primary and secondary endpoints. In January 2021, Myovant and Pfizer (PFE) announced positive one-year data from the SPIRIT extension study of Relugolix combination therapy in women with endometriosis. 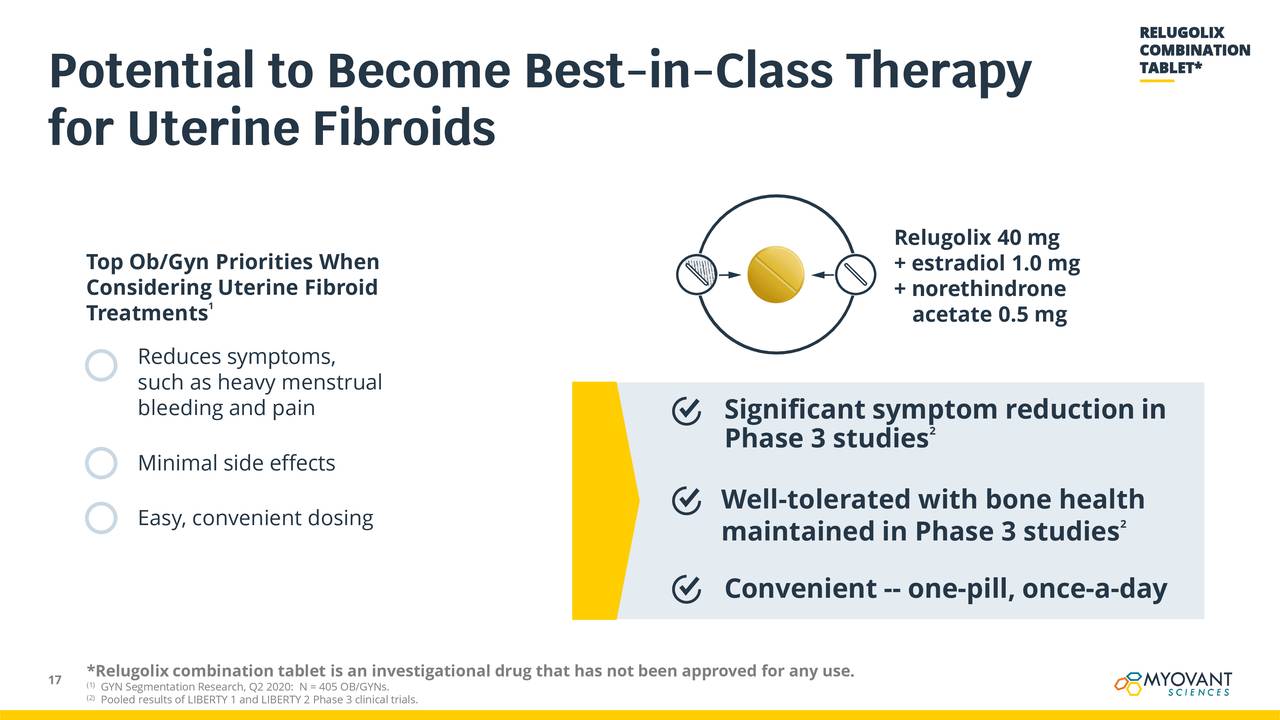 Overall, 84.8% and 73.3% of women reported clinically meaningful reductions in menstrual pain and non-menstrual pelvic pain over one year with stable bone mineral density after initial minimal loss. Leveraging the results of the SPIRIT program, the company expects to submit an NDA to the FDA before the end of June. A marketing application in Europe should follow in the second half of 2021 as well. Gedeon Richter Plc. (Richter) is Myovant’s commercialization partner for relugolix combination tablet for the uterine fibroids and endometriosis indications in Europe and certain other international markets.

There’s been lots of pipeline activity as of late. In December of 2020, Relugolix was approved by the FDA as the first and only oral GnRH receptor antagonist for adult patients with advanced prostate cancer. Following approval, the drug was launched in the U.S. in January of 2021 and did some $3.6 million in net product revenues in the first quarter. 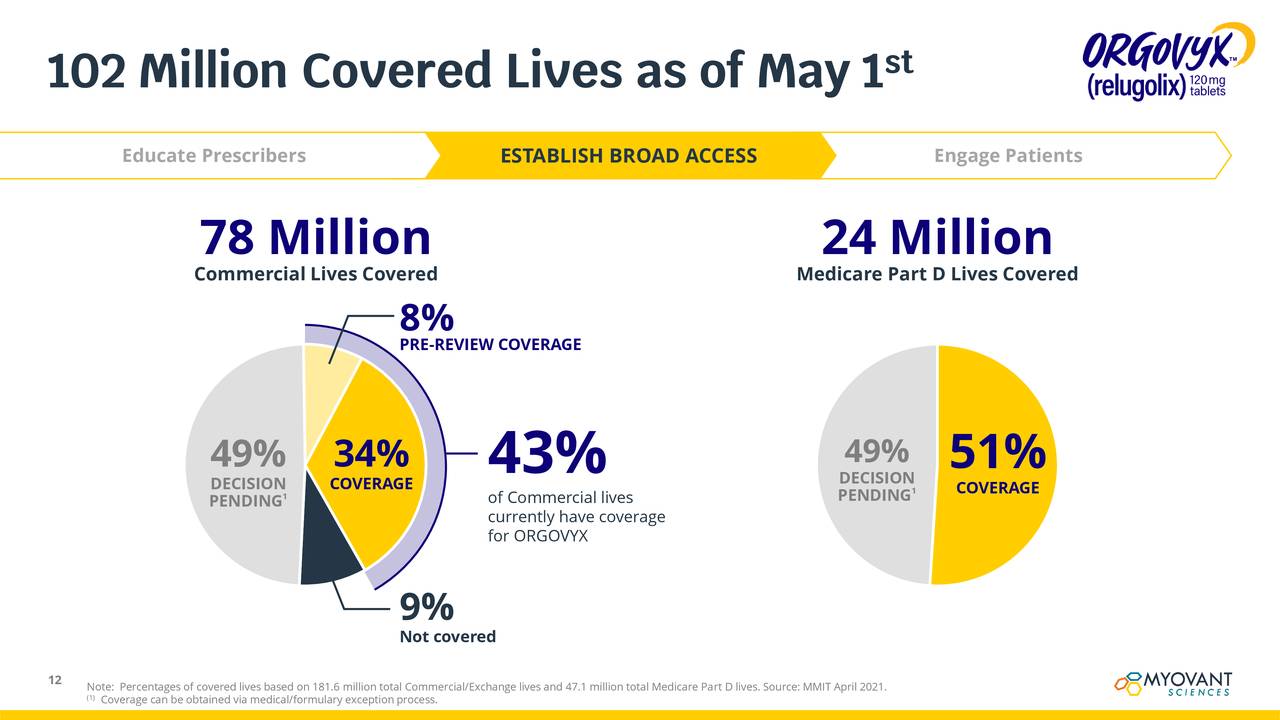 The company has a 100-person oncology sales force, and they're making progress achieving coverage with key commercial and Medicare Part D payors. Also, in December of 2020, a joint collaboration with Pfizer was announced.

The two companies are teaming up to jointly develop and commercialize Relugolix in oncology and Relugolix combination tablet in women’s health in the U.S. and Canada. Myovant received a $650 million upfront payment and is eligible to receive additional regulatory and sales milestones, for total net payments of up to $4.2 billion. Pfizer has until mid-year to exercise rights outside of the U.S. for Relugolix in oncology. If the big drugmaker exercises this option, Myovant will receive a $50 million payment and will be eligible to receive double-digit royalties on net sales.

In addition to the LIBERTY and SPIRIT programs, the company is now exploring the contraceptive efficacy of the Relugolix combination tablet in a Phase 3 trial called SERENE. The study is designed to support the potential benefit of prevention of pregnancy for women taking Relugolix combination tablet for the treatment of uterine fibroids and endometriosis. On May 19, this study had a partial clinical hold placed on it by the FDA that hopefully is resolved in short order. 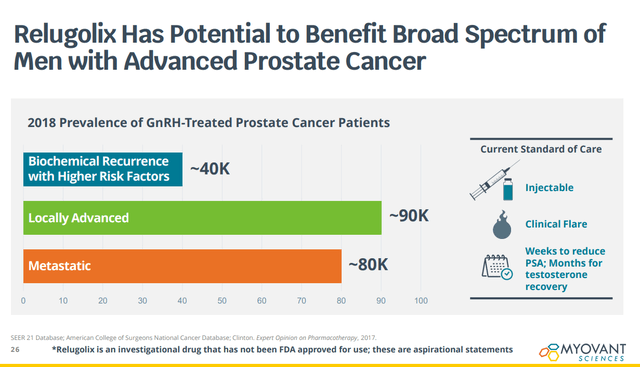 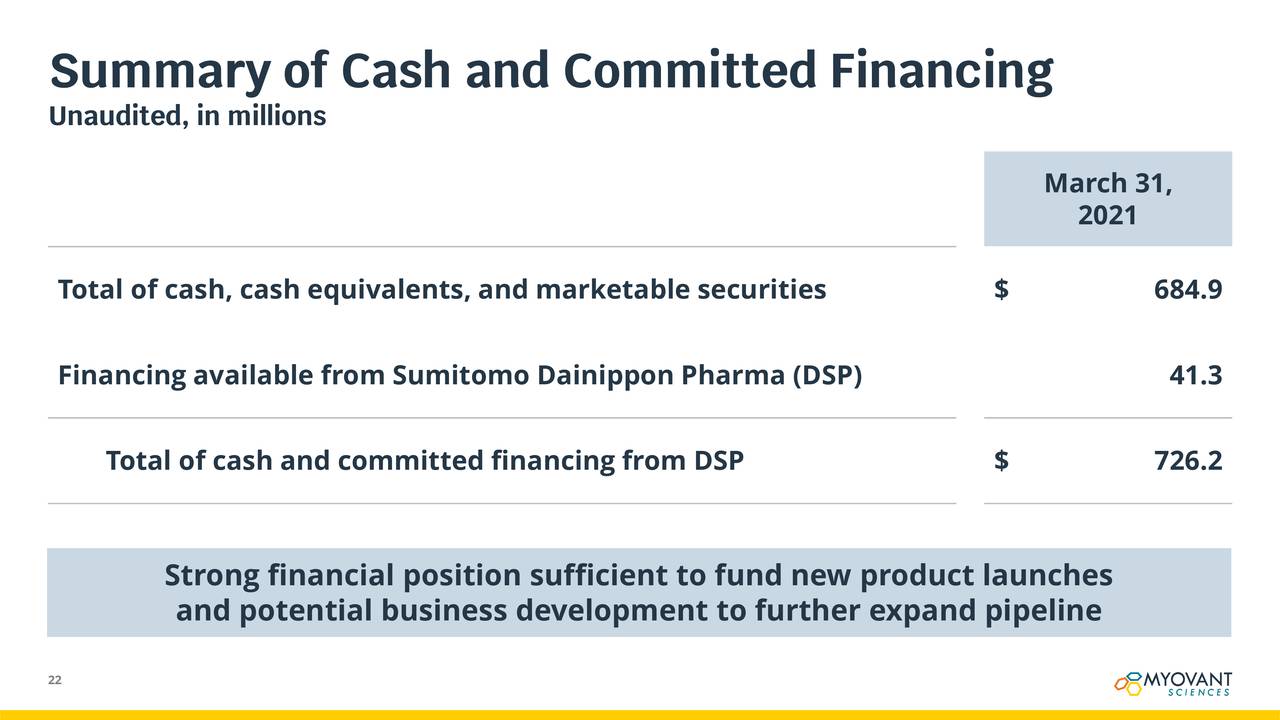 The company is a bit of a battleground stock among analyst firms. Over the past month, JPMorgan ($32 price target, down from $38 previously), Evercore ISI ($55 price target), and Robert W. Baird ($30 price target) have reiterated Buy ratings on Myovant. Citigroup has a different take and recently maintained its Neutral rating and lowered its price target six bucks a share to $24.

I like but don't love Myovant at these price levels so covered calls are the prudent way to go. The deal with Pfizer is a major positive and the company has upcoming catalysts on the near-term horizon. Myovant's coffers also are now full as well thanks to that large upfront payment and another FDA approval seems very likely. 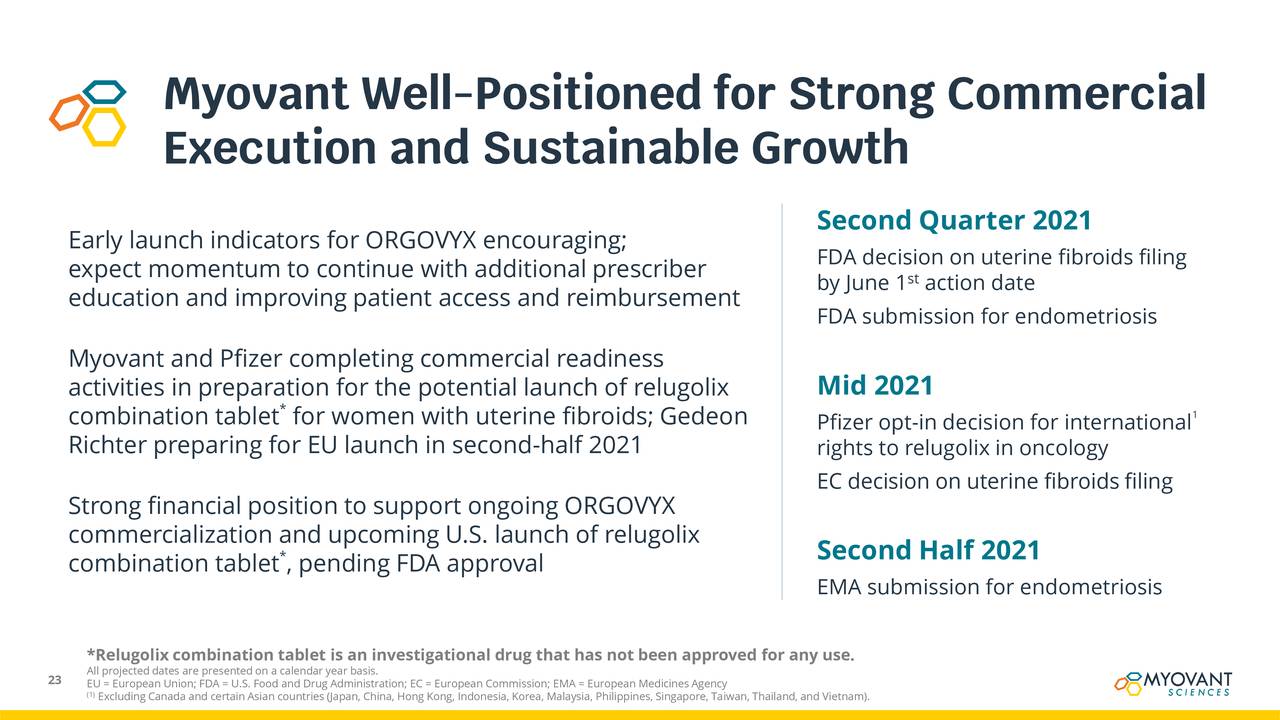 Being a woman is a terribly difficult trade since it consists principally of dealings with men.”― Joseph Conrad, Chance

Author's note: I present an update my best small and mid-cap stock ideas that insiders are buying only to subscribers of my exclusive marketplace, The Insiders Forum. Our model portfolio nearly doubled the return of its benchmark, the Russell 2000, since its launch.  To join our community and gain access to our market beating returns, just click on our logo below.

The Insiders Forum's focus is on small and mid-cap stocks that insiders are buying. Some studies have shown that equities with heavy insider purchases outperform the overall market over time. The portfolio managed by Bret Jensen consists of 15-25 top stocks in different sectors of the market that not only are attractively valued but have had some significant insider purchases in recent months. Our goal is to outperform the Russell 2000 (the benchmark) over time.  Since its launch in the summer of 2016, the Insiders Forum's model portfolio has generated an overall return of 145.81% as of 03/18/2022.  This is more double the 71.95% return from the Russell 2000 over that time frame.

Disclosure: I am/we are long MYOV. I wrote this article myself, and it expresses my own opinions. I am not receiving compensation for it (other than from Seeking Alpha). I have no business relationship with any company whose stock is mentioned in this article.