The Invesco Dividend Achievers ETF (NASDAQ:PFM) is losing its cachet. Ten years of dividend growth isn't as impressive as it was five years ago, considering its constituents spent much of the last decade easily growing dividends in the longest bull market on record. This year, PFM ballooned from 284 to 350 constituents and now represents a high-fee market-like fund full of underperformers that pay less in dividends than the S&P 500. While I slightly favor PFM's sector allocations compared to the broader market, there are much better and cheaper options available. Therefore, I advise investors to pass on PFM and look for others who have at least some additional financial health screens.

PFM tracks the NASDAQ US Broad Dividend Achievers Index, which is comprised of companies with at least ten consecutive years of increasing annual regular dividend payments. Constituents are evaluated annually in March using market data through the end of December. It's a market-cap-weighted Index with a maximum weight of 4% for any single security. PFM's expense ratio is 0.53% and currently has about $637 million in assets under management.

With 350 securities, the Index is well-diversified at both the sector and industry level. In addition to the sector breakdown below, PFM holds companies across 95 different industries. 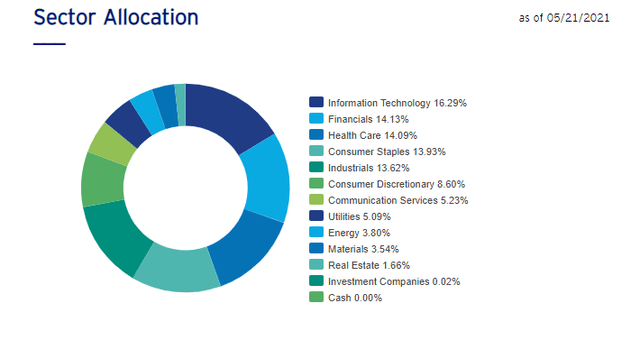 Information Technology comprises 16.29%, which is different than how other dividend ETFs are constructed because it's a market-cap-weighted fund. Microsoft (MSFT) and Visa (V) are in the top ten holdings as shown below, while others like Oracle (ORCL) and Accenture (ACN) round out the top 20. Financials, Health Care, Consumer Staples, and Industrials each make up about 14%. 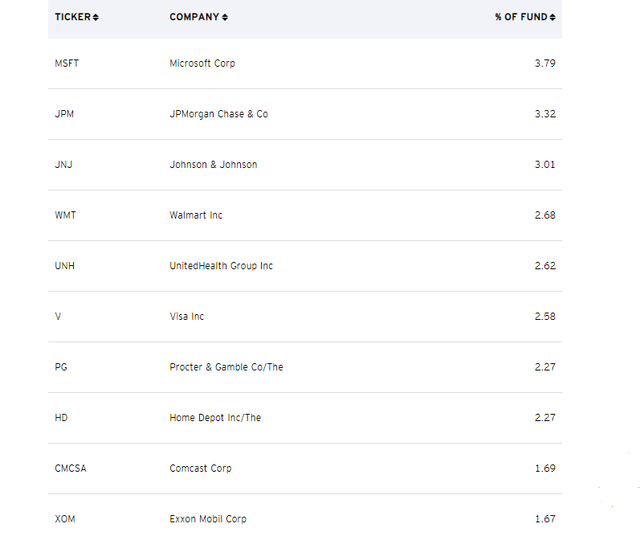 Compared with an Index fund like the iShares Core S&P 500 ETF (IVV), PFM has less exposure to Information Technology and Communication Services and more Industrials and Consumer Staples. Generally speaking, I favor these differences, as I expect a rotation out of tech stocks this year.

Source: Created By Author Using Data From Invesco And iShares

As expected with a dividend growth fund, PFM's dividend history is favorable, though not without a few blips along the way. Dividends have grown at an annualized rate of 5.10% since 2006.

Since October 2005, PFM has underperformed the S&P 500 by 2.10% per year. Most of the underperformance appears to have begun in 2014, about five years after the Great Financial Crisis ended, paving the way for the longest bull market run in history.

Investors haven't received any additional dividends either. Assuming you decided not to reinvest dividends to fund their living expenses instead, IVV would have generated more income the majority of the time.

I attribute this lackluster performance to the fact that the U.S. Broad Dividend Achievers just aren't as impressive as they once were. It's now a bloated Index with 350 constituents. I used the Wayback Machine to find that in 2014, there were only 239 constituents. It grew steadily up until the beginning of 2021, when it had 284 constituents. Now, as a result of March's reconstitution, it's exploded by nearly 25%.

As with any ETF review I do, I will focus more on how I believe an ETF will perform in the future rather than relying on past performance. Below are some selected fundamental metrics I've calculated, broken down by the top 20 industries, which comprise about 70% of the fund. 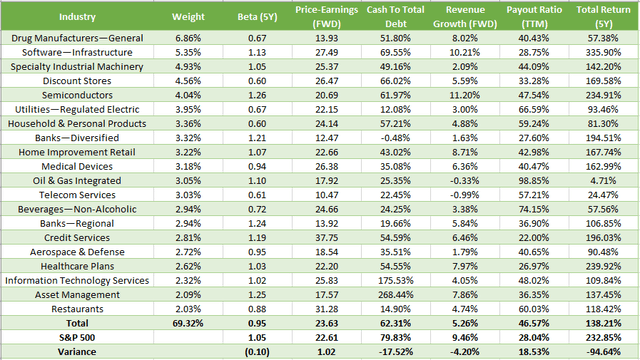 On the current fundamentals, I view PFM as one with slightly less risk than the market, per its 0.95 five-year beta, but also one that is priced about the same as the market based on its forward price-earnings ratio. The lower cash to total debt ratio doesn't raise a concern, as I consider anything about 50% to be strong, and the payout ratio is below 50%. However, Wall Street isn't so optimistic about this group of historical underperformers. On a weighted-average basis, the current constituents have returned 138.21% in the last five years (CAGR of 18.96%) compared to the S&P 500's 232.85% (CAGR of 27.19%). Analysts are only projecting one-year revenue growth of 5.26% for PFM's constituents compared to 9.46% for the S&P 500. They see weakness in top industries like Specialty Industrial Machinery, Regulated Electric Utilities, Diversified Banks, Integrated Oil & Gas, and Telecom Services.

Personally, I'm not as bearish on these industries as I think rising inflation rates will be beneficial (or at least less harmful) to the Consumer Staples and Utilities sectors. Costs are typically easier to pass on to consumers who need these products and services, making consumers have less money available to be spent elsewhere. Less exposure to the Information Technology sector is welcome. Still, I'm not quite sure it's worth paying a relatively high fee of 0.53% annually for a couple of minor changes you could get just by using sector ETFs instead.

The bottom line is that ten years of consecutive dividend growth is not impressive anymore. It's been relatively easy for companies to grow their dividends in the longest bull market in history, and the short-lived stock market downturn caused by the pandemic was not enough to trim the fat off this bloated fund. I'd instead recommend looking at the U.S. First Trust Rising Dividend Achievers ETF (RDVY), which I wrote about earlier this month. Unlike PFM, these Achievers also require a track record of dividend growth, but it's not as stringent. In exchange, it screens for financial health metrics that focus on cash preservation, and since its inception, it's outperformed PFM by an annualized 3.78%.

My advice is to take a pass on PFM and instead look to get your portfolio's allocations by sector right. If you believe inflation is not transitory and want protection from higher interest rates, increase your allocations to REITs, commodities, and Consumer Staples and pare back exposure to Information Technology and Consumer Cyclical stocks. PFM does this to a certain extent but far from sufficient to justify its high fees. While it's likely to outperform the S&P 500 if tech stocks crash, investors can simply do much better.

I perform independent fundamental analysis for over 850 U.S. Equity ETFs and aim to provide you with the most comprehensive ETF coverage on Seeking Alpha. My insights into how ETFs are constructed at the industry level are unique rather than surface-level reviews that’s standard on other investment platforms. My deep-dive articles always include a set of alternative funds, and I am active in the comments section and ready to answer your questions about the ETFs you own or are considering.

My qualifications include a Certificate in Advanced Investment Advice from the Canadian Securities Institute, the completion of all educational requirements for the Chartered Investment Manager (CIM) designation, and a Bachelor of Commerce degree with a major in Accounting. In addition, I passed the CFA Level 1 Exam and am on track to become licensed to advise on options and derivatives in 2023. In November 2021, I became a contributor for the Hoya Capital Income Builder Marketplace Service and manage the "Active Equity ETF Model Portfolio", which as a total return objective. Sign up for a free trial today! Hoya Capital Income Builder.