Before providing the supporting information on the Adams Natural Resources Fund (NYSE:PEO), I want to summarize the main reasons for this recommendation.

1) The iShares MSCI USA Momentum Factor ETF (MTUM) is a $14 Billion large-cap growth fund which is having its semi-annual rebalancing coming up soon at the end of May. The ETF rebalancing will favor the hottest sectors based on 6-month and 12-month performance ending April 30, 2021. The MTUM ETF currently has zero exposure in the energy sector, but they will be buying into the sector heavily at the end of May.

2) PEO owns a portfolio of large cap energy stocks and is trading at a -13% discount to NAV. Many of their holdings will likely be added to MTUM during the upcoming rebalancing. By buying PEO now, you can "get in front of" the MTUM rebalancing trades.

3) MTUM is not the only fund that uses the momentum strategy. Many other trend-following funds will likely be rotating into the energy sector in the near future as well.

(Data below is sourced from the Adams Funds website unless otherwise stated.)

The fund seeks to deliver high total returns over time by capitalizing on the long-term demand for energy and materials. It invests in energy and natural resources stocks and tries to exceed its benchmark while consistently distributing dividends and capital gains to shareholders. It is also committed to paying annual distributions of at least 6% a year. This distribution policy was adopted in 2012.

PEO does not use any permanent leverage. But it occasionally may buy and sell options or utilize swap programs, which some may consider a form of leverage.

PEO has had decent long term performance compared to its benchmark, but has underperformed the S&P 500 longer term because the past weakness in the energy sector.

Here is the total return NAV and price performance record of PEO since 2011 compared to its energy peers.

How does The MTUM Rebalancing work?

The MTUM ETF tends to track the market's hottest sectors based on 6 month and 12 month performance. Since its 2013 inception, it has tended to have high allocations in technology stocks. The table below contains the current sector allocations from the MTUM web site as of May 20, 2021. Note that two of the major eleven sectors are missing from the table- Energy and Real Estate. That is because both of these sector allocations are currently zero. 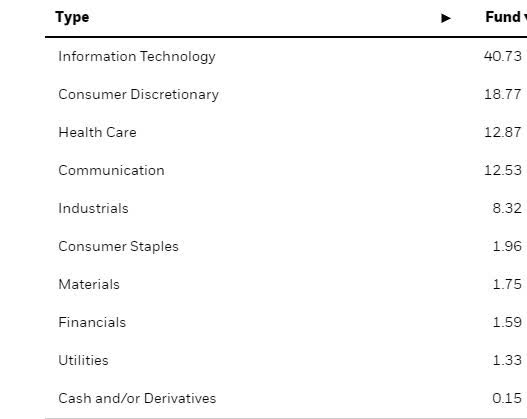 After the next MTUM rebalancing is over, we should see a good chunk of the allocation to Information Technology going over to the Energy sector.

The MTUM ETF started tracking the MSCI USA Momentum SR Variant Index in May, 2020. This index is nearly identical to the fund's previous benchmark. The only difference is that it does the portfolio shuffling over a three day period around each rebalancing date, rather than all in one day. This is good for investors, since it reduces transaction costs associated with turning over the portfolio.

I suspect that many of the tickers in the above table will likely be added to MTUM during next weeks' rebalancing. We may also see some weakness in some of the technology names.

The annual distribution rate of 6.1% along with the 13.5% discount allows investors to recover a portion of the discount whenever a distribution is paid out.

On December 14, 2020, the Fund announced an "enhanced" share repurchase plan in order to manage the discount and enhance liquidity. Under the enhanced program, share repurchases may be made in the open market when the shares have traded at a discount of 15% or more for at least 30 consecutive days. The enhanced program also provides that the Fund will engage in a proportional tender offer to repurchase shares when the discount exceeds 19% for 30 consecutive trading days, not to exceed one such offer in any twelve-month period.

During the first quarter of 2021, the Fund repurchased 37,000 shares of its stock. The shares were repurchased at an average price of $12.93 and a weighted average discount to NAV of 15.6%.

Here is the five year discount history for PEO from CEFconnect. Note that the fund has nearly always traded above a 10% discount during this period. 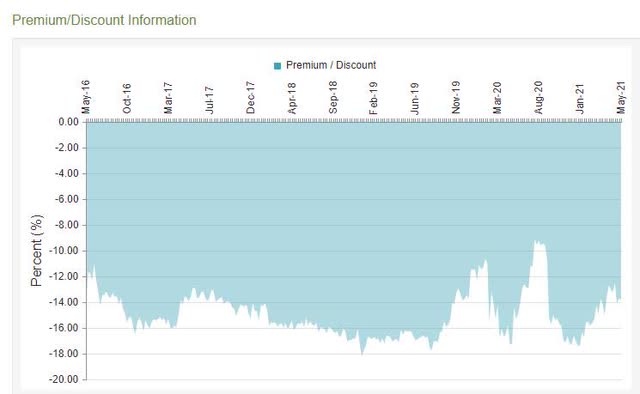 In the current environment, it is getting harder to find good closed-end funds at attractive discounts, so it pays to look for special situations. I believe that PEO should benefit from the upcoming MTUM rebalancing and the recent increase in oil prices.

PEO is fairly liquid, but the bid-ask spread is often four cents or so. Because of this, I would recommend using limit orders and splitting up larger orders into multiple smaller trades. For those that are impatient, you can usually get some price improvement with smaller sized market orders (or marketable limit orders).

Marketplace Service For Those Hunting For Yield

This service is dedicated to yield/income investors who wish to avoid market froth. We encourage investors to benefit from yield opportunities within closed-end funds, business development companies, and other niche areas. For safe and reliable income streams, check out Yield Hunting.

Disclosure: I am/we are long PEO, MTUM. I wrote this article myself, and it expresses my own opinions. I am not receiving compensation for it (other than from Seeking Alpha). I have no business relationship with any company whose stock is mentioned in this article.