The summer months are upon us, and with the warmer weather comes a fresh reminder that the worst of the COVID-19 pandemic may be finally behind us.

Here in New York, the joy of a real summer is palpable as the U.S. economy recovers from last year’s recession.

Financial markets are also brimming with optimism, so now seems like a good time to take the pulse of U.S. small-cap valuations and prepare for the next phases of the economic cycle.

That Was Then, This Is Now

This year’s hot trade has been the “reopening” trade, as investors have grown bullish on the economic revival and gotten a piece of it any way they could, from cyclical sectors, to value, to small caps.

But as the run-up in equities persists into June, it’s prudent to examine how overvalued or undervalued markets are in a historical context.

As of May, the Russell 2000 Index is trading higher than 30 times estimated earnings; that’s more than 25% higher than its monthly historical average dating back to early 2007.

To provide a sense of how high that really is, its forward price-to-earnings (P/E) ratio is ranked in the 92nd percentile over that timeframe (where a higher percentile rank indicates a higher forward P/E value, with the 100th percentile as the highest on record).

The S&P SmallCap 600 Index is a bit more subdued, trading at a negligible 4% forward P/E premium compared to its historical average. But this modest premium remains in the 70th percentile over the same period, indicating it’s not exactly a bargain by historical standards, either.

The odd man out in the universe of supercharged small-cap valuations is the WisdomTree U.S. SmallCap Fund (EES).

It’s currently trading at an 11% discount to its historical average on a forward P/E basis since inception in February 2007. It also remains attractively priced by historical standards, ranking in the 26th percentile by the same measure.

Similarly, EES is also trading at a historically deep discount to the Russell 2000. Its forward P/E is 58% less than that of the broader small-cap Index as of May.

Likewise, this discount is nearly as steep as it has ever been. Since inception, EES has always traded at a forward P/E discount by nature of its earnings-weighted strategy, but the current margin ranks in the top decile of discounts throughout its history. 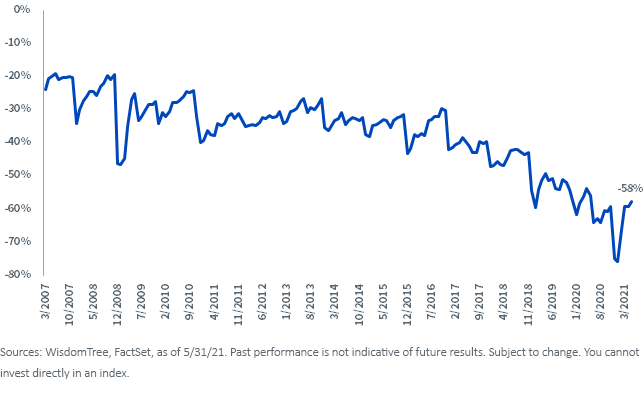 We think this signals an important value opportunity for two reasons.

If markets continue to move higher as the economy recovery continues its improvement, then it seems intuitive that a small-cap fund predicated on positive earnings could potentially benefit from an earnings revival. We think this signals an important value opportunity for two reasons.

Likewise, small caps tend to operate in cyclical economic sectors versus larger market benchmarks such as the S&P 500 Index. Cyclicals have already started to enjoy the benefits of the reopening trade this year, and if they have more room to rally, then there’s reason to believe they may outperform.

On the other hand, if markets turn sour, there’s a possibility that the highly valued, overbought companies within the Index could be the first to suffer. Fortunately, since EES has been able to resist the valuations run-up thus far, it may potentially be more insulated from a reversal.

No Need to Sacrifice Quality

Let’s expand on that last scenario. After all, it’s fair to assume that many investors may still be traumatized by last year’s volatility.

Given their interlinkages within the domestic economy and importance as part of the global supply chain, small caps tend to disproportionately suffer during any sign of economic weakness. The U.S. has obviously been in pandemic recovery mode since the end of Q2 last year, which leaves us wondering when the next economic slowdown will materialize.

Whenever that may be, there’s no reason why a stereotypical, risky small-cap allocation needs to suffer as much as the broader asset class.

To help mitigate against major volatility, we introduced a new composite risk scoring mechanism in the creation of the WisdomTree U.S. SmallCap Index, which EES seeks to track. We introduced four quality factor measurements and a momentum factor component to help defend against the junkiest and most volatile companies.

The quality pickup in the portfolio is appealing, which signals to us that EES can potentially protect on the downside during a reversal if the underlying companies are fundamentally healthier.

A Small-Cap Allocation for Any Market

Mapping the road ahead for any market environment is already hard enough, but it’s even more difficult this time as we finally exit the pandemic.

Whether you’re a bull or bear, there are direct implications for small-cap allocations.

No matter your economic forecast for the near future, we think the WisdomTree U.S. SmallCap Fund can be a part of it

There are risks associated with investing, including possible loss of principal. Funds focusing their investments on certain sectors and/or smaller companies increase their vulnerability to any single economic or regulatory development. This may result in greater share price volatility. Please read the Fund’s prospectus for specific details regarding the Fund’s risk profile.

Brian Manby joined WisdomTree in October 2018 as an Investment Strategy Analyst. He is responsible for assisting in the creation and analysis of WisdomTree’s model portfolios, as well as helping support the firm’s research efforts. Prior to joining WisdomTree, he worked for FactSet Research Systems, Inc. as a Senior Consultant, where he assisted clients in the creation, maintenance and support of FactSet products in the investment management workflow. Brian received a B.A. as a dual major in Economics and Political Science from the University of Connecticut in 2016, and is pursuing the Chartered Financial Analyst designation.

WisdomTree
4.82K Followers
WisdomTree launched its first ETFs in June of 2006, and is currently the industry's fifth largest ETF provider. The WisdomTree Seeking Alpha profile will feature content by some of our leading analysts including: Luciano Siracusano: Luciano Siracusano is WisdomTree's Chief Investment Strategist and Head of Sales. He is the co-creator with CEO Jonathan Steinberg of WisdomTree's patented Indexing methodology and has led the firm's sales force since 2008. Luciano is a regular guest on CNBC and FOX Business, and speaks frequently on ETFs, indexing and global financial markets. A former equity analyst at ValueLine, Luciano began his career as a speechwriter for former New York Governor Mario Cuomo and HUD Secretary Henry Cisneros. He graduated from Columbia University with a B.A. in Political Science in 1987. Jeremy Schwartz: As WisdomTree’s Director of Research, Jeremy Schwartz offers timely ideas and timeless wisdom on a bi-monthly basis. Prior to joining WisdomTree, Jeremy was Professor Jeremy Siegel's head research assistant and helped with the research and writing of Stocks for the Long Run and The Future for Investors. He is also the co-author of the Financial Analysts Journal paper “What Happened to the Original Stocks in the S&P 500?” and the Wall Street Journal article “The Great American Bond Bubble.” Christopher Gannatti: Christopher Gannatti began at WisdomTree as a Research Analyst in December 2010, working directly with Jeremy Schwartz, CFA®, Director of Research. He is involved in creating and communicating WisdomTree’s thoughts on the markets, as well as analyzing existing strategies and developing new approaches. Christopher came to WisdomTree from Lord Abbett, where he worked for four and a half years as a Regional Consultant. Rick Harper: Rick Harper serves as the Head of Fixed Income and Currency for WisdomTree Asset Management, where he oversees fixed income and currency products developed through our collaborations with the BNY Mellon Corporation and Western Asset Management. Rick has over 19 years investment experience in strategy and portfolio management positions at prominent investment firms. Prior to joining WisdomTree in 2007, Rick held senior level strategist roles with RBC Dain Rauscher, Bank One Capital Markets, ETF Advisors, and Nuveen Investments. Bradley Krom: Bradley Krom joined WisdomTree as a member of the Fixed Income and Currency team in December 2010. He is involved in creating and communicating WisdomTree’s thoughts on currency and fixed income markets, as well as analyzing existing and new fund strategies. Prior to joining WisdomTree, Bradley served as a senior trader on a proprietary trading desk at TransMarket Group. Tripp Zimmerman, Research Analyst Tripp Zimmerman began at WisdomTree as a Research Analyst in February 2013. He is involved in creating and communicating WisdomTree’s thoughts on the markets, as well as analyzing existing strategies and developing new approaches. Prior to joining WisdomTree, Tripp worked for TD Ameritrade as a fixed income specialist. Tripp also worked for Wells Fargo Advisors, TIAA-CREF and Evergreen Investments in various investment related roles. Tripp graduated from The University of North Carolina at Chapel Hill with a dual degree in Economics and Philosophy. Tripp is a holder of the Chartered Financial Analyst designation. Jonathan Steinberg, CEO Prior to establishing WisdomTree, Jonathan founded, and served as Chairman and CEO of Individual Investor Group, Inc. From 1998 to 2004, he held the role of Editor-in-Chief of Individual Investor and Ticker magazines. Before his entrepreneurial accomplishments, Jonathan was an Analyst in the Mergers & Acquisitions division at Bear Stearns & Co. He attended The Wharton School at the University of Pennsylvania and is the author of Midas Investing, published by Random House in 1996. Zach Hascoe, Capital Markets Zach Hascoe began at WisdomTree in August 2010, and works directly with David Abner, Head of Capital Markets. The Capital Markets group is involved in all aspects of the WisdomTree ETFs including product development, helping to seed and bring new products to market, as well as trading strategies and best execution strategies for the client base. Zach works closely with the trading and liquidity community and does analytics on ETF baskets and the capital markets. He is a frequent contributor to the WisdomTree blog on topics related to the capital markets, liquidity, structure and best execution. In addition, he manages the hedge fund relationships for the firm. Zach received a B.A. from Bucknell University and was Captain of the Bucknell Tennis Team.