It was in February when the Nasdaq-100 scratched out its first YTD high. Since the beginning of the year, the Index appeared poised to continue last year’s meteoric gains. Those hopes ran aground toward the latter part of the month as investors and analysts alike became increasingly worried about price pressures building in the greater economy. Sure, last year’s online price runup could be readily explained by lockdowns and stay-at-home mandates. Prices in the travel space, energy, accommodations, restaurants, bars, and most face-to-face services—largely shuttered through much of the pandemic—offered up an occasional dead-cat bounce. Fast forward to the early spring of 2021, after trillions of dollars being pushed into the economy, prices on a diverse array of products--from tofu to commodities like lumber, corn, soybeans to computer chips to even availability of overnight stays in the nation’s national parks—now carry sharp price increases or limits on availability in the midst of a bumpy, economic reopening. The year’s pent-up demand has clearly outstripped supply, leaving extreme cases of price volatility in its wake. Outside of possibly the cruise industry, which hopes to restart regular sailings this summer, there are now precious few examples of prime-time prices cutting in the opposite direction. Just how “sticky” these runaway prices turn out to be and the continuing slack in the labor markets are quintessential to the forward calculations of the Federal Reserve as they contemplate the timeframe of reducing its $120 billion/month support of the economy.

Figure 1: 10-year Treasury, the Nasdaq and its Rate of Change and its Correlation and the US Dollar 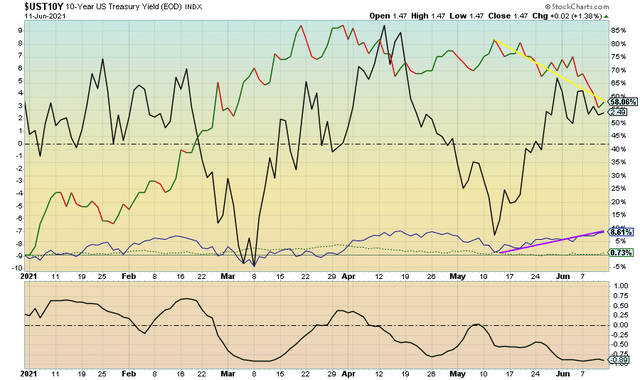 The Nasdaq (QQQ)(blue line, Figure 1 above) repeatedly took glancing blows to the chin from about mid-February through the first week in March. The Index’s rate of change (black line, Figure 1, above) was decidedly to the downside, losing just over 3% by early March alone. Of course, the Nasdaq is the punching bag proxy for high-growth technology and biotech stocks, often sporting outsized market valuations. By early March, the Nasdaq resumed its upward bias, sketching out its second YTD high by mid-April before, once again, plunging to its second YTD trough in as many months.

For its part, the yield on 10-year Treasuries (red-green line, Figure 1 above) continued to the upside, reaching a high of 1.75% by the end of March—the highest post in more than a year. The mark proved unsustainable as the 10-year yield has declined for the past four weeks, reaching a four-week low of 1.43% at Friday’s market close.

All the same, the pandemic-induced, headline YOY CPI metrics in March and April revealed a disconcerting—and outsized—bias to the upside, doubling MOM with May’s 5% post. The last time headline CPI hit such a level was in the heat of the Great Recession in August 2008. Yet a glance just below the headline number was certainly telling. Used cars and trucks alone accounted for almost a third of the month’s inflation post. The sector was responsible for about the same amount of April’s headline inflation number.

Another point to remember is the CPI basket of goods is updated once every two years. Accordingly, the CPI weighting of March and April 2021 YOY is likely an overestimation given the extreme drop in demand for vehicles in YOY metrics during pandemic lockdown. Further trouble came with the prioritization of semiconductor chip manufacturing which morphed quickly toward high-end applications to satisfy homebound demand for video, streaming and smart phones—at the expense of low-end applications like dashboard gadgetry in automobiles. The result now is vast parking lots of new vehicles awaiting backordered chips, delaying new car deliveries to dealerships across the country and around the world. Used cars quickly became a market substitution for the lack of supply of new cars on dealer lots across the country, sending prices for used cars skyward.

With the economy now slowly reopening in fits and starts depending on locality, airfare, hotel accommodation and car rental prices—pummeled during the pandemic lockdown months—quickly saw the opportunity to reverse bleeding red ink on their balance sheets. Ditto with sporting events as the cardboard personages were replaced by real-live fans desperate to see a game in the flesh—irrespective of cost. With little further insight, it becomes much easier to see such price hikes as largely opportunistic—and transitory in duration.

May job’s report also proved singular on the issue of slack in the labor market. While the month’s job creation exceeded that of an upwardly revised April post, job creation still remained below expectations, leaving an estimated 7.6 million jobs gap with pre-pandemic February 2020. A defining feature of the report continues to be current—the proportion of working age population in employment is still at its lowest reading since 1983. For the moment, markets have drawn the conclusion that the Fed is likely right to concentrate on the labor side of its dual mandate. May’s job report revealed a less than robust labor market recovery, lowering investor angst that heavy hiring and outsized wage gains could trigger inflation. And in the closing weeks of May, markets reluctantly acknowledged the fact—investors offered up a respite, returning to the Treasury market. The yield on the 10-year note fell from a YTD high of 1.74% to its Friday close of 1.45% (yellow line, Figure 1 above). The market based, five-year breakeven inflation rate fell in unison to 2.43%, down from a peak of 2.72% last month. The 10-year breakeven rate fell to 2.36%, down from a 2.55% post last seen in July of 2008. All remained calm in US markets as the CBOE VIX quietly fell to a reading of 15.65, below 16 for the first time since February. The reading is also well below its long-term average.

Other factors in the story includes a weaker US dollar (green dotted line, Figure 1 above). Currently, the US dollar is down 2.6% from its peak at the beginning of the 2nd quarter, and is now close to its lowest post in a month. Dollar weakness is also linked to the high levels of pandemic liquidity sloshing around in the market due to ongoing monetary and fiscal stimulus packages last year and early spring of 2021. Cash on deposit in commercial banks in the US is at an all-time high of $17.1 trillion.

A weaker dollar drives down the cost of hedging currency swings in global forex markets. The demand for US Treasury securities saw increased purchases by mainland China (up $5.2 billion) and Hong Kong (up $3.10 billion). The renminbi recently logged its strongest post against the dollar since May of 2018. Singapore (up $5.90 billion) and Britain (up $4.50 billion) both added to their US Treasury stocks through the end of March. Further, the bond rally since mid-May has been global in nature. The yield on the 10-year Bund was up 19-basis points for the month to -0.25% yield. The 10-year Gilt was up 12 b/p on the month for a yield of 0.79%. Japan’s 10-year note was up a slender 5 b/p on the month for a yield of 0.03%. With a weakened dollar, the purchase of US Treasury securities has now, increasingly, become a go-to position. Unsurprisingly, recent Treasury auctions have seen an increase in demand from both individual foreign investors and foreign-based institutional funds. A recent sale on the 26th of May for 5-year debt received the most foreign bids from overseas investors since August at over 64%. A 7-year issue in the same week saw experienced similar demand from overseas investors, the most this year.

Short of the cataclysmic events of nature, sticky prices don’t change all that much from period to period, year to year. In that category for May 2021 YOY includes such staple food items as meats, poultry, fish and eggs whose prices rose 0.1% for the period. Also included in the mix is dairy and related products, also up 0.1% for the period. Non-alcoholic beverages and beverage materials dropped 0.2% YOY. Rice, pasta and cornmeal dropped 2.1% while cereals and cereal products dropped 0.8%. Bakery goods rose 0.3%. Outside the food space, medical commodities dropped 1.9%, prescription drug prices dropped 2.1%, medical equipment and supplies dropped 5.8%. The list is far from complete.

Most of these items define the red line in Figure 2, above. The outsized moves of more flexible prices in the greater economy define the black line in Figure 2. The flexible prices are the ones to watch in the months ahead. These prices are expected to largely revert to their long-term mean over time, once out of the shadow of the many pandemic distortions impacting the supply of raw materials and component parts in the manufacturing process and the finished goods delivered to consumers lifts.

The 16-17 June Federal Reserve Open Market Committee clearly highlights the economic calendar for the week. While the Fed has stridently argued that recent inflation spikes across the economy reflect supply side bottlenecks destined to disappear, as supply either catches up with demand or the current pent-up demand subsides, markets appear to have reconciled with the Fed’s view—at least for now. Investors widely expect a discussion, and possibly a timeline, on the beginning steps of just how and when the Fed will begin tapering its $120 billion/month support of the greater economy. The federal funds rate, now at an effective 0.06%, is expected to be anchored ever closer to zero for the foreseeable future—or at such time when slack in the labor market reaches its (unknowable) nadir. You still need a strong labor market to get more persistent, and sustainable, inflation. Relatively high unemployment acts as a lid on inflation. Again, the market has given its tentative blessing—at least for now.

That said, markets are leaving little room for a wrong turn by the Fed on inflation. Since the 23rd of March 2020, the Fed has pumped close to $4 trillion in the economy both directly and through myriad facilities, both existing and newly created, since the Covid-19 outbreak hit US shores. It has maintained borrowing costs at historic lows.

On average, the nonfarm payroll was growing at about an annualized 3% clip prior to the pandemic. With May’s job report, payroll growth is roughly 4% off that pace. This further explains the Fed’s emphasis on mitigating the continuing slack in the labor market. Given the lag between policy implementation and subsequent impact on the economy, however, overshooting or undershooting policy objectives is a constant peril. The 1970s provide myriad examples of economic shock that largely overwhelmed policy. It wasn’t until 1979, when Paul Volcker took over the Fed, that inflation was finally hog-tied. The remedy, arguably, ushered in Latin American debt crisis. Will this time be different?

Meanwhile, the Nasdaq continues to be the obvious beneficiary of the bond market rally, now up almost 9% since the 12th of May (purple line, Figure 1 above). The negative correlation between a lower yield on the 10-year note and a re-emerging Nasdaq Index is clearly noteworthy (lower panel, Figure 1 above).