In the past couple of quarters, DXP Enterprises' (NASDAQ:DXPE) outlook has mended perceptively following the recovery of the US economy and industrial production. Strategically, it has also been slowly diversifying into non-traditional industries, including alternative energy and food and beverage, to insulate from the uncertainty and volatility of the energy business in the medium-to-long term. In addition, it has recently made an acquisition that focuses on serving the water and wastewater markets.

However, some of the company's directly tied segments to the upstream capex and production will continue to reel under the demand slowdown. Also, the company's leverage is high, which can become a concern if the free cash flow generation does not get sufficiently robust in the long term. Nevertheless, given the low trading multiples relative to its peers and stock repurchases, I think the stock can yield reasonable returns in the medium-to-long term.

What Are The Indicators Showing? 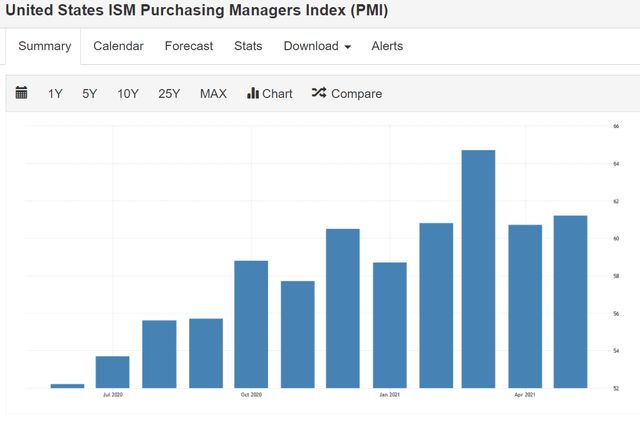 The industrial end market encapsulates a significant part of DXPE's sales. According to the company's estimates, the industrial markets account for 67% of its total business. The business environment reads better today than it did at the start of the year. According to tradingeconomics.com, the ISM Manufacturing Prices Index increased to 61 in May 2021, a marginal increase compared to the previous month but less than 65 recorded in March. Overall, the sentiment remains optimistic but less buoyant compared to the start of Q2. I think the PMI holding steady will keep the performance of industrial suppliers like DXPE resilient. The current index is above the average for the last 12 months and is a positive indicator for FY2021.

The remaining part of its business depends on the energy sector. However, since this part of the portfolio follows upstream capex and production, it is likely that the energy side of the business will remain subdued in the near term. Since then, some positives have come out concerning the international capex and energy price stability in Q2. The company's Service Centers segment is also likely to see higher maintenance, repair, and operating jobs in Q2.

On the other hand, its Innovative Pumping Solutions (or IPS) segment is going through a rough patch from energy demand decline. The pressure in the end market is reflected in the fall in the backlog in this segment. According to the company's estimates, at the end of Q1, it was lower than the average backlog for the past several years, indicating a bearish pressure.

The Shift In Strategies

As a result of the uncertainty and volatility of the energy business, the company plans to diversify into chemicals, alternative energy, food and beverage, sanitary, water and wastewater, refineries, and military medium-to-long-term. In addition, in May 2021, it acquired Carter & Verplanck to boost the products and services distribution focused on the water and wastewater markets. I think the acquisition will expand its market share in the rotating equipment product and water and wastewater markets. Read more about the company's strategies in my previous article here. 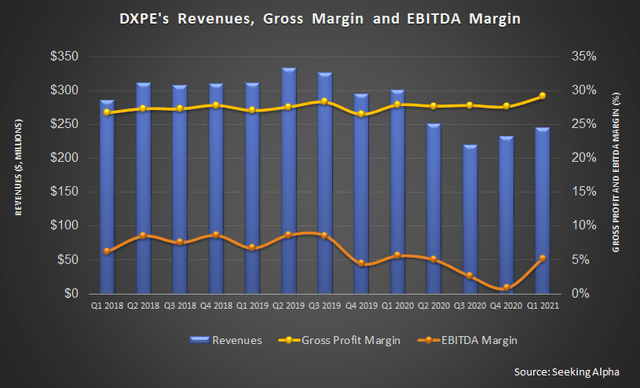 Despite the IPS segment margin contraction, strong gross profit margins from its recent acquisitions pulled the margin upward in Q1. During Q2, in some of the international markets, the pandemic can lead to a continued slowdown. However, I think DXPE can use its operating leverage to maintain the gross margin in the short term.

The Segment Performance And Outlook 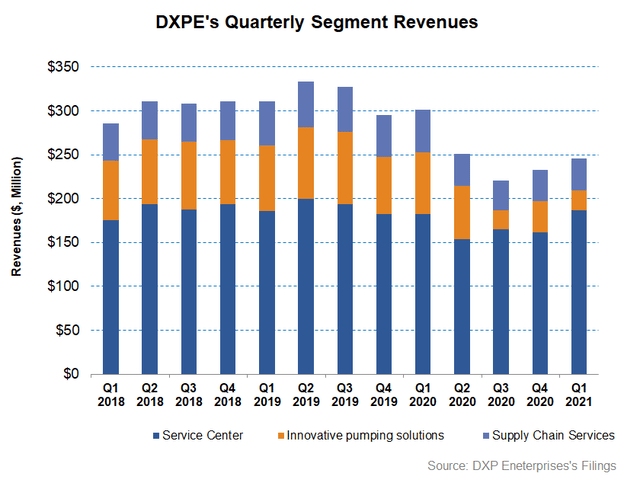 DXPE's Service Center segment, which accounted for 76% of its Q1 revenues, saw a 16% revenue growth from Q4 2020 to Q1 2021. Even year-over-year, sales went up by 2%, which is a remarkable achievement given the pressure in the industry in the past few quarters. While the average daily sales did not change much between these two quarters, the diversity of end markets in this segment and MRO services' typical resilience to the industry cyclicality kept the growth curve forward.

DXPE's IPS segment witnessed a 35% quarter-over-quarter revenue fall in Q1. Lower capex by the shale energy producers and decreased US crude oil production led to the revenue fall in Q1. For the rest of 2021, I expect the segment performance to remain weak, although the rate of decline will fall because of the higher energy budget for the international energy players. Plus, the segment seeks to benefit from the growth in biofuels, food and beverage, and water & wastewater markets.

Sequentially, the Supply Chain Services segment revenue remained nearly unchanged in Q1. However, the segment operating margin weakened to 6.5% in Q1 from 9% in the previous year. In Q2, given the US's recovery from the pandemic, I expect the segment to make further inroad and improve performance.

In Q1 2021, DXPE's cash flow from operations (or CFO) was $10.6 million compared to a negative CFO a year ago. Despite lower revenues, CFO improved due to significant positive changes in working capital. As a result, the free cash flow (or FCF) also turned positive in Q1 2021.

As of March 31, the company's liquidity (cash balance plus the undrawn revolving credit facility) was $258.6 million. Much of its long-term debt has a maturity of seven years. Its leverage (0.91x) is higher than its peers' (NOW Inc. (NYSE:DNOW), MSC Industrial (NYSE:MSM), and MRC Global (NYSE:MRC)) average of 0.51x. With the available liquidity, DXPE does not require additional external financing to meet its near-term financial obligations. However, it might want to generate sufficiently large FCF in the medium-to-long term because of the high leverage.

In May, it repurchased 1.5 million of its outstanding shares in an $85 million buyback plan, which indicates the ability to grow free cash flow and its commitment to creating shareholder value. However, this may also indicate a possible undervaluation, which I will discuss next. 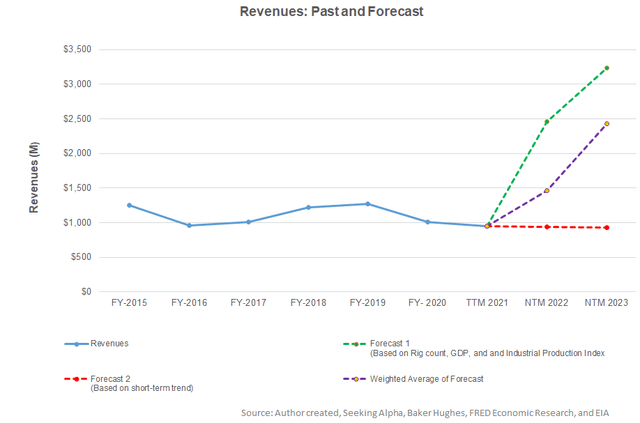 I have observed a regression equation based on the historical relationship among the US rig count, the US gross domestic product, the Industrial Production Index, and DXPE's reported revenues for the past six years and the previous four-quarter trend. Based on the model, the revenues should increase sharply in the next twelve months (or NTM). I also think it will continue to move north in the next two years. 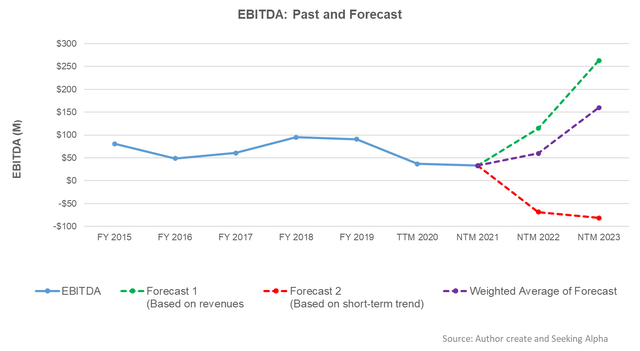 Based on a simple regression model using the average forecast revenues, I expect the company's EBITDA to shoot up in the next two years. It can continue to increase sharply in NTM 2024. 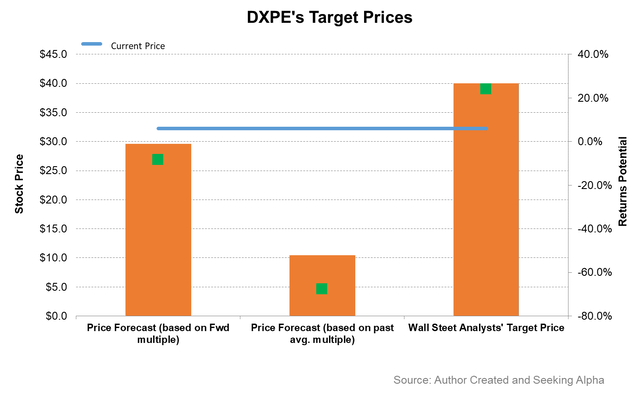 What's The Take On DXPE? 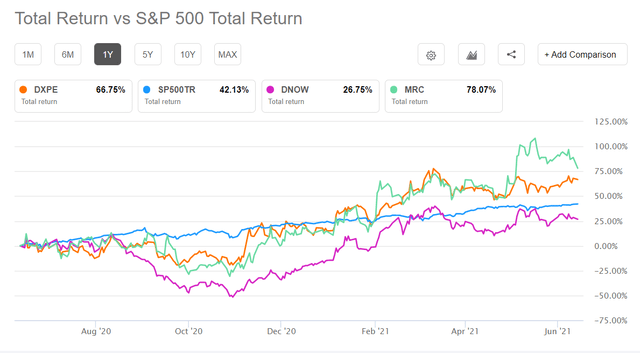 DXPE has a two-pronged growth engine: rising consumer confidence and energy price stabilization at a sufficiently high level. In addition, as the US economy strengthened in 2021, the industrial production index has gone up, leading to an improved outlook for the company in the near-to-medium term. It also considers other end markets like chemicals, alternative energy, food and beverage, sanitary, water and wastewater, and refineries for diversification. As a result, the stock outperformed the SPDR S&P 500 Trust ETF (SPY) in the past year.

However, the Innovative Pumping Solutions segment will continue to reel under demand slowdown. Although the company's leverage is high, it has enough liquidity to ensure that the financial risks remain low. As a result, I think investors can look for stability and reasonable returns from the stock.