Basel III regulations come into force in Europe at the end of the month. The dominant narrative in terms of the effect on gold prices is that the new scheme will be bullish for gold because the regulations are thought to crimp the supply of unallocated paper gold by making the trading of gold derivatives less profitable.

I happen to agree with this, but that does not mean gold is headed up immediately at the end of the month because of Basel III. The paper gold supply has been suddenly constricted once before, and the immediate aftermath was actually a fall in the gold price of 6% in two weeks. The fall didn't last long, but in the short term, the unexpected did happen.

I'll get into exactly what that event was in a minute, but before that I want to try to answer this basic question: Why would the banking establishment want to implement these new regulations if they would have the effect of pushing physical gold prices higher? Wouldn’t that damage all paper currencies? Why would they deliberately do such a thing and hurt their own interests?

A Primer on Why Basel III is Bullish for Gold

The basic argument for why Basel III is probably bullish for gold is well laid out here. In short, Basel III will classify only physical, allocated gold as a 0% risk asset, as opposed to unallocated paper gold derivatives like Comex gold futures and London LBMA forwards. The theory is that this would make trading gold futures and forwards uneconomic, pulling bullion banks away from market-making activities in these markets.

Clients of bullion banks who wish to maintain exposure to gold would be forced, or at least encouraged, to move to physical allocated gold instead. Plus, the practice of dumping huge amounts of contracts on the market to tamp down the notional gold price would be much more difficult to accomplish. I’m not taking a position here on whether paper gold dumping for this purpose is actually happening, but rather saying that if it is happening, the incoming Basel III regulations would make it much more expensive to execute.

Why Would the Banking Establishment Want Higher Gold Prices?

I believe the simple answer is that they don't. The banking establishment has no interest whatsoever in pushing gold prices higher. So why are they doing this? In my view, they actually think that the new Basel III scheme will push gold prices lower by weakening the gold derivatives market.

How can they possibly believe this? Consider, the banking establishment is dominated almost entirely by Keynesian thinkers who believe paper currencies are money, and gold is just a pet rock barbarous relic doorstop. It is likely they believe that demand for paper gold derivatives is what fuels the physical gold price and not the other way around.

While I cannot definitively prove that the framers of Basel III actually think this way, this is indeed what both Keynesian and Chicago School economists in favor of ending the Bretton Woods system believed back in 1971. Back then, the dollar was the paper gold supply, as dollars were exchangeable for gold at a flat rate of $35 an ounce for foreign central banks. Hence what I said above, that the supply of paper gold was suddenly constricted in 1971. Economists in favor of ending this final direct link to gold actually believed that this would push gold prices much lower.

Their thinking was that by removing what they perceived as the “dollar’s support of the gold price”, the monetary demand for gold would cease and the price would consequently fall. Austrian School economist Murray Rothbard specifically wrote about this erroneous belief in his book “What Has Government Done To Our Money”. Referring to ending the Bretton Woods system linking the dollar to gold at $35 an ounce, Rothbard says (page 104):

All pro-paper economists, from Keynesians to Friedmanites, were now confident that gold would disappear from the international monetary system; cut off from its “support” by the dollar, these economists all confidently predicted, the free-market gold price would soon fall below $35 an ounce, and even down to the estimated “industrial” nonmonetary gold price of $10 an ounce. Instead, the free price of gold, never below $35, had been steadily above $35, and by early 1973 had climbed to around $125 an ounce, a figure that no pro-paper economist would have thought possible as recently as a year earlier.

Still, the pro-paper economists that Rothbard refers to here were technically right in the very short term. Here’s what happened to gold prices in the immediate aftermath of the ending of Bretton Woods. 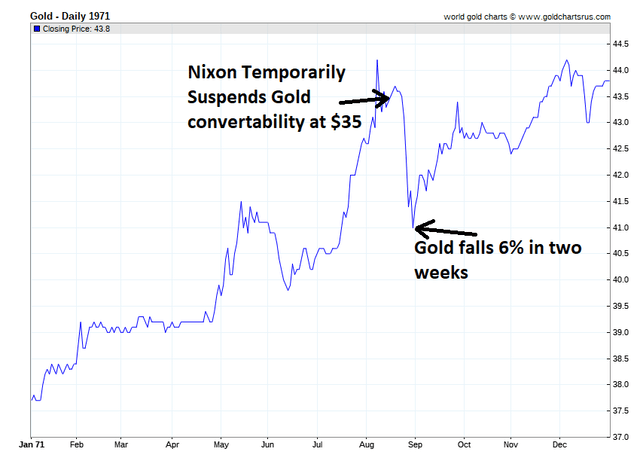 After the initial fall, by November, gold prices returned to where they were before the gold link was severed. Gold proceeded to explode higher from there. So excluding the very short term, the pro-paper economists were wrong then, and in my view they are wrong now as well. Demand for dollars does not support gold prices. It’s the exact opposite. The dollar’s continued exchangeability with gold is what gives the dollar any value at all. If dollars were no longer exchangeable for physical gold at all, all dollars would be completely worthless. It is not the demand for dollars that pushes the gold price higher, but the demand to get rid of dollars that does this.

Even though making trading paper gold derivatives uneconomic is much more likely to push gold prices higher rather than lower, establishing short-term gold positions in expectation of an immediate bump is a fool’s errand, in my opinion. There is historical precedent for saying that gold prices could even fall in the immediate aftermath of June 28, when Basel III is set for European implementation.

Aside from gold’s fall in the immediate aftermath of the ending of Bretton Woods, let’s go back to December 31, 1974. This was the date that owning physical gold became legal once again for American citizens thanks to President Gerald Ford. For 41 years since the Roosevelt Administration confiscated monetary gold held by the citizenry in 1933, owning monetary gold was illegal for Americans.

One would expect the gold price to rise as a result of monetary gold being legal again for private individuals. Over time, this is indeed what happened, but it was not immediate. In fact, there was a period of about four and a half months in 1974 where the gold market was fully aware of what was about to happen and was able to prepare for it. Ford signed the gold legalization bill on August 14, 1974, but it would only go into effect at the end of the year on December 31. Here’s what happened to the gold price in those interim months. 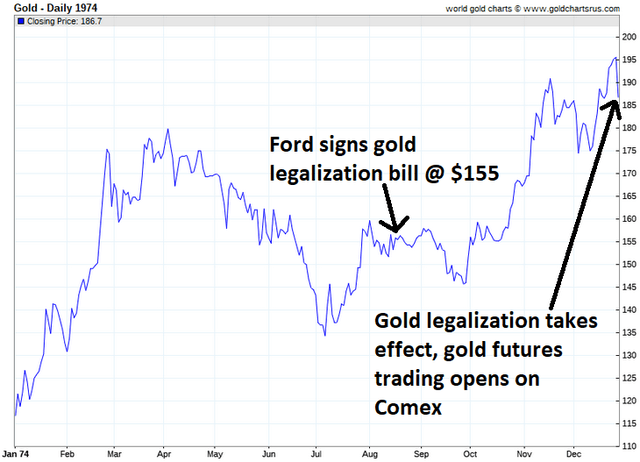 As you can see, gold rose 20% from $155 to about $186 in the period between Ford’s signing of the bill and its implementation. Pretty bullish, right? Not really. Here’s what happened immediately after gold’s legalization on December 31, 1974. 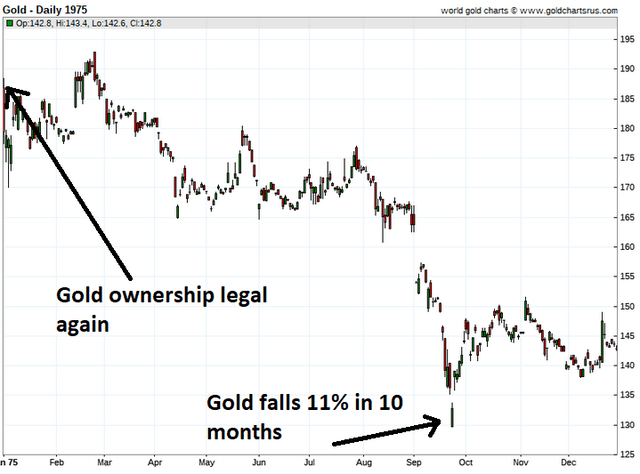 Gold immediately started to fall right after legalization, even gapping through the $155 level by September, the level it sat when Ford’s bill was first signed into law. It did not break the 1974 high decisively until nearly 4 years later in July, 1978. 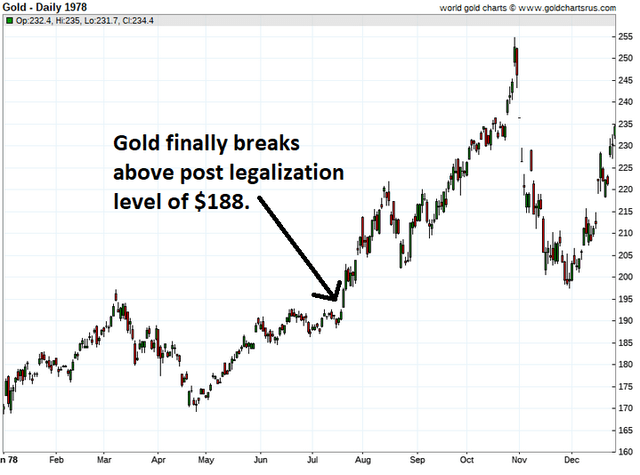 But to preempt the question, no I do not believe it is going to take four years for gold to retake old highs as happened from 1975 to 1978. This time, I believe gold will climb much more quickly following the implementation of Basel III, just not necessarily in the immediate aftermath. Here’s why.

Why did it take nearly 4 years for gold to retake its post legalization highs? I believe because the legalization of physical gold was not the only thing that happened on December 31, 1974. On the very same day, gold futures trading was opened on the Comex. The effect was to divert physical demand into the paper markets. The market had an outlet of gold “supply” in the form of unallocated futures.

Back then, demand for gold and the supply of notional paper gold were unleashed on the market simultaneously. On balance, the gold price fell, and it took almost four years for old highs to be overcome. This time, with the implementation of Basel III, only the supply of paper gold is set to be constricted, while the demand for gold continues to rise due to the astonishing debasement of paper currencies and dramatic increases in consumer prices globally that is ongoing.

Gold may not launch into the stratosphere immediately following the implementation of Basel III. It’s too obvious of a setup and markets do not tend to cooperate like this in the short term. Buy-the-rumor-sell-the-fact is very common in obvious setups like these. Still, it most likely will not take 4 years to regain old highs as it did back in the 1970s.

In the final paragraph of Rothbard’s book referenced above, he writes:

As we face the future, the prognosis for the dollar and for the international monetary system is grim indeed…The prospect for the future is accelerating and eventually runaway inflation at home, accompanied by monetary breakdown and economic warfare abroad. This prognosis can only be changed by a drastic alteration of the American and world monetary system: by the return to a free market commodity money such as gold, and by removing government totally from the monetary scene.

It looks increasingly like we are heading into the final crack-up boom that Rothbard predicted was coming our way. The implementation of Basel III is just another nail in the dollar’s coffin as a viable gold substitute, which is what gives the dollar any value at all. At some point, dollars may not be exchangeable for gold at all unless the dollar supply is backed by reserves at Fort Knox, assuming they exist. Until then, gold bugs should continue accumulating gold and silver on the dips rather than trying to time short-term gyrations based on news events.

The End Game Investor is dedicated to protecting real wealth and helping subscribers profit during the ongoing global monetary collapse. Coming from an Austrian School perspective on economics, we discuss ideas like this one and other more exotic ones using a variety of vehicles that are low-risk/high reward. If you suspect that something is seriously wrong in the monetary sphere and that the US dollar is in existential danger, then take a peek at what we're doing to prepare for the end game with a two week free trial, lest the end game catch you unprepared.

Disclosure: I am/we are long OUNZ. I wrote this article myself, and it expresses my own opinions. I am not receiving compensation for it (other than from Seeking Alpha). I have no business relationship with any company whose stock is mentioned in this article.