Want a sign of the times? US high yield debt recently joined the big camp of the fixed income world featuring a negative real yield. Of course, that's using the yield-to-worst and headline y/y CPI, so a little bit of embellishment there. While that phenomenon will be short-lived as base effects are worked off, there just isn't much premium for owning risky bonds right now. Should that worry investors?

Chart of the Week

The chart of the week displays how high yield spreads have narrowed to their lowest level since the 2007 top in global equities. Not necessarily a bullish data point it would seem. We find that the current 3.12% difference between junk bonds and Treasuries is nearly one standard deviation below the long-term average. For perspective, it rose to more than 1 SD above the LTA at the height of the COVID crisis, but that paled in comparison to what was witnessed during the GFC. 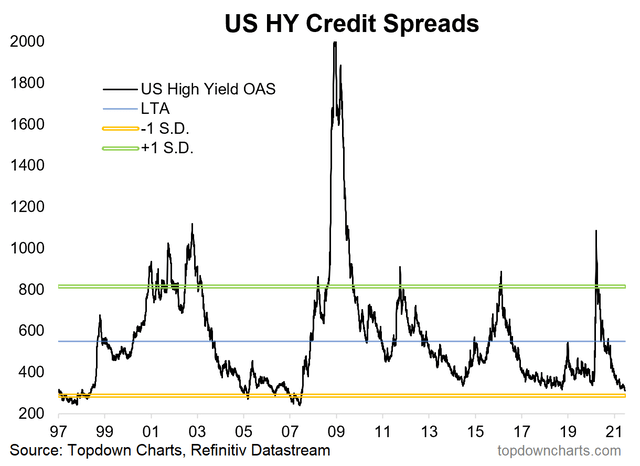 Several factors can account for demand being strong for high yield bonds. For one thing, the US Fed continues to suppress yields lower, though there are signals that they might back off on purchases before long. Something else to consider is that economic activity is running at a fast clip in the US - perhaps 7.0% this year.

We track several indicators when analyzing the interest rate environment. For example, when bankruptcies are few, then it makes sense that junk debt trades at a narrow premium to safe bonds - that's what we see in the Credit Managers Index [CMI] subindexes.

In this week's Weekly Macro Themes report, we detail a pair of CMI sub-indexes that are correlated to the US HY credit spread. Moreover, most traders are aware of how strong global PMI readings have been - not just in the States. The macro backdrop remains strong, helping to support the fundamental case for low spreads.

What About The Fed

We hinted at the Fed's actions earlier, but the chances of a sustained period of hawkish FOMC policy moves remains low in the near-term. We believe that a lengthy tightening cycle is needed to send HY spreads significantly higher. Even in that scenario, it's not a sure thing that junk bonds would see much higher rates versus Treasuries.

We looked back at the tightening cycles of the mid-2000s and late 2010s - HY spreads did not increase too dramatically versus Treasuries. High yield bond bears (those anticipating higher spreads) will point to the Fed's plans to begin selling off its corporate bond and corporate bond ETF positions soon.

It's no surprise that allocations to fixed income (as a percent of total assets) are very low despite solid flows into bonds in recent years. The TINA effect remains on full display even after a significant rise in aggregate bond market yields from a year ago. Investors have largely shunned bond funds for equities.

We keep tabs on what mutual fund investors are doing in the HY space. Allocations to junk debt are near rock-bottom levels - currently, just 1.4% of mutual fund AUM is in HY bond funds. For context, the percentage was double that in early 2014. The lack of investor enthusiasm suggests there is hardly euphoria in the HY arena. As for ETFs, flows have turned higher, but are not excessive.

From a technical seasonal perspective, spreads tend to widen through early October, coinciding with the usual risk-off trade that is sometimes seen across markets during the third quarter. Perhaps we could see spreads rise in the coming months, but we see that being a short-term movement if anything.

Each morning on Finance Twitter there seems to be the latest chart displaying tight credit spreads. There was a time to aggressively get involved in HY debt at lofty yields in early 2020, but blink and you would've missed it.

Today, we see the fundamental backdrop justifying an extremely low yield on junk bonds. While it's natural to conclude that spreads can only rise from current levels since they are back near the 2007 lows, macro indicators need to decelerate, then turn lower before we see a sustained widening.