A couple of quick thoughts on recent home price appreciation. 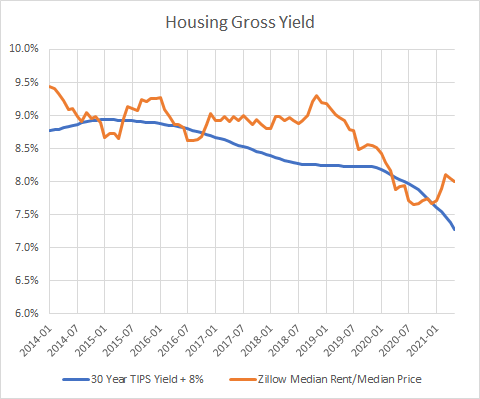 In graph 1, I estimate a national median gross rent/price yield from Zillow rent and price data. I compare it to the 30 year TIPS [REAL] interest rate (plus 8%). Certainly a case can be made that some of the recent price movement has been related to declining real long term yields. However, without more historical data, this doesn't tell us much. Two measures both moved in a certain direction over a period of time, and so it's easy to match them up on the y-axis.

Here is a longer series with similar measures. Here, I estimate the national average gross rent/price level with total rent/total residential real estate value for owned homes. I also used the CPI rent inflation measure with the Case-Shiller national home price index, with a scaling constant as a second version of the estimate. Both estimates of rent/price yields follow similar trends.

Here, I use a 30 year TIPS bond issued in 1998 and then in more recent years the general estimate for 30 year TIPS yields. Here I only added a 3% spread to the TIPS yields. Part of the difference is that the mean yield is lower than the median yield. (Price/rent is not the same across the market. It is systematically higher where rents and prices are higher.) Part of the difference is that we imposed a one-time shock on housing during the financial crisis, adding a 2-3% spread on housing yields compared to other assets, so the spread in the first graph from 2014 onward is much higher than it had been before.

When I first started looking at these things years ago, I excused the pre-2006 price increases with this relationship. I still more or less stand by that. It isn't controversial to say that home prices are related to interest rates. In fact, I think it helps clarify the analysis to show that it is specifically real long-term rates that seem to correlate with housing yields. But, even in 2005, that doesn't tell the whole story. Rent/price yields are not uniform across cities. They decrease systematically where rents are high. Some of that might be attributed to expectations of future rent increases. Some of it might be attributed to lower cost of ownership where rent is a product of location rather than structures and services. In any event, before 2000, gross housing yields had been between 6-7% for some time, and after 2000 they continued to be in that range in most cities. In some cities like LA or NYC, they declined to more like 3-4%. The aggregate yield around 5% was an average of a country increasingly becoming bifurcated into at least two different stories.

So, there is an interesting set of interacting variables here. If inflation rises, I don't think that will have much effect on real home prices or construction activity. If real rates rise, which will be associated with real economic growth (and probably with a mitigation of short-run inflation), then it should have a moderating influence on home prices. But, unless mortgages can flow, multi-unit projects can be easily approved, and construction can run hot, then rents will continue to rise and long-term real interest rates will continue to be limited. In that case, it seems like a "hot" market is likely to remain, with housing growth (but at historically low construction rates) and high prices (low housing yields), while the "have nots" who are under the "tyranny sincerely exercised for the good of its victims" will face rising rents.

I suspect that a construction boom would both lower rents and raise real long-term interest rates. But, the boom must come first. In the meantime, housing is in a peculiar space, where we should expect there to be some sensitivity to rising rates if the economy continues to recover, yet also housing yields continue to retain at least a 2% spread to long-term 30 year rates, compared to pre-crisis norms, so that nobody should expect home prices to revert to earlier relative levels (especially as rents continue to rise).

Kevin A. Erdmann
196 Followers
As a private investor, I have concentrated on deep value and turnaround microcaps, where illiquid trading markets and reputational risks allow mispricing to be occasionally extreme. Over the past few years, I have developed a radical new macro-level view of the economy. I have found that the housing bubble was not caused by reckless lending or over-investment in housing. Rather, it was caused by a shortage of housing in several important urban markets. The subsequent bust and financial crisis were not inevitable collapses of a demand bubble, but were avoidable and self-imposed consequences of a moral panic about building and borrowing. The key factors providing insights into financial markets going forward are related to the shortage of housing and the disastrous public policy responses to it. This has led to high rent inflation, perpetually tight monetary policy, a divergence of yields between US housing and bond markets, very low rates of new construction, and labor immobility/stagnation.Two books are in the works on the topic.  Here is the first:https://rowman.com/ISBN/9781538122143/Shut-Out-How-a-Housing-Shortage-Caused-the-Great-Recession-and-Crippled-Our-EconomyI am currently a Visiting Fellow at the Mercatus Center at George Mason University.
Follow
1 Comment
To ensure this doesn’t happen in the future, please enable Javascript and cookies in your browser.
Is this happening to you frequently? Please report it on our feedback forum.
If you have an ad-blocker enabled you may be blocked from proceeding. Please disable your ad-blocker and refresh.