Thanks to a confluence of factors, Value stocks have significantly outpaced their Growth peers year-to-date, with the Russell 1000 Value up 16.3% versus 11.2% for the year. But the performance gap between Value and Growth has been closing since its 10.3% spread at the end of the first quarter of 2021.

So what factors were driving value’s outperformance? After a huge pandemic-related run-up in 2020, growth stock valuations were pretty lofty. As investors positioned for the new year, value stocks started rallying in the 4th quarter of 2020 and into the first quarter of 2021. The COVID-19-driven lockdowns had an unprecedented impact on the global economy and investors sought value in cyclical stocks, such as energy, ﬁnancials, retail and other beaten-down segments of the economy. For a disciplined value investor, it was an opportunity to deploy capital to good companies trading below their historical norms.

The SPDR S&P Retail ETF (XRT) gained more than 45%, the Energy Select Sector SPDR (XLE) rallied almost 38%, and the Financial Select Sector SPDR was up 29% through the end of May versus only 12.7% for the S&P 500 Trust (SPY). Beaten-down value names have definitely been rewarded by investors this year at the expense of the growthy, tech names that led the market last year during the pandemic. 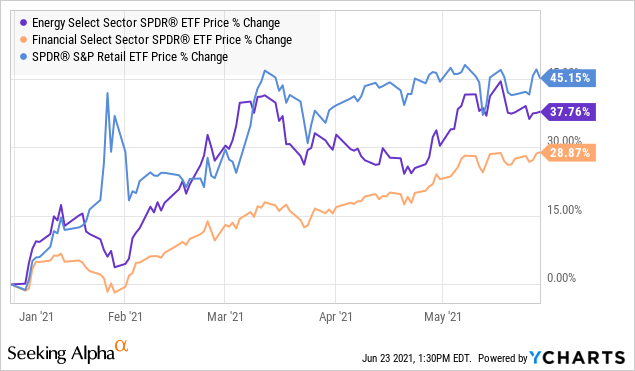 The growth-stock sell off was further exacerbated the last few months due to concerns regarding inflation and the need for the Fed to curb it with higher interest rates.

GraniteShares XOUT U.S. Large Cap ETF (NYSEARCA:XOUT) is a large core offering, as its methodology eliminates the bottom 250 names from the top 500 U.S. companies by market cap. On the premise that companies face a continuous threat from technology innovation and need to react quickly to survive, the XOUT strategy specifically aims to exclude companies that are the least prepared to react and adapt to disruption.

To identify the weakest 250 companies, XOUT’s model applies 7 factors to determine which companies are “X’d out”. 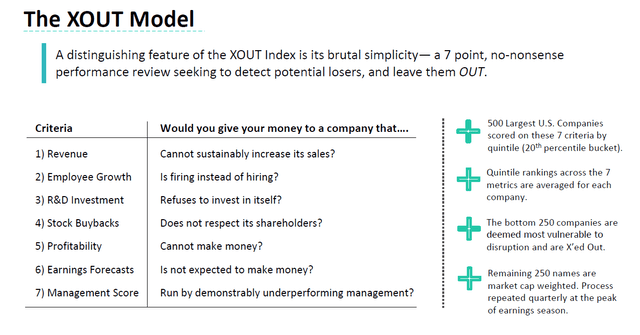 While the XOUT methodology is style agnostic, the approach does gravitate the product towards companies that are growing instead of shrinking which was a performance headwind through May of this year.

That does appear to be shifting as of late at Growth stocks have rebounded since May, with the Russell 1000 Growth up 4.6% vs. a negative return of 1.7% for the Russell 1000 Value month-to-date through 6/23/21. To use Wayne Gretzky’s hockey analogy of “skating to where the puck is going, not where it has been”. 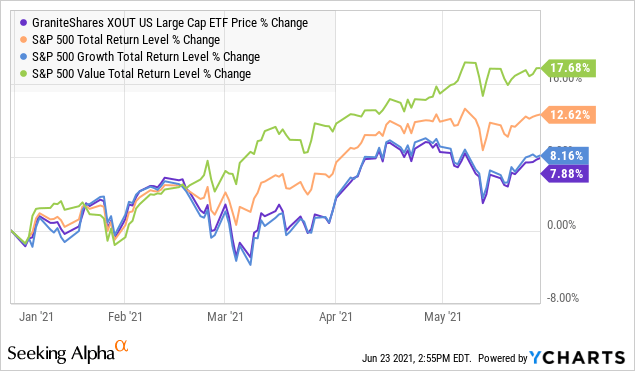 One of the reasons for its underperformance relative to Value and the overall market has been its underweight to the Energy sector. While the short-term outlook for Energy looks bright as the economy reopens, the long-term prospects for fossil fuels remain bleak as alternative forms of energy receive both popular and regulatory support. It is a prime example of a segment of the market that is a perennial “XOUT” as a sector that has been permanently disrupted. In the context of where the puck is going in the future, it is not going into fossil fuels.

Similarly, the portfolio is underweight other segments of disruption such as Financials, Industrials, and Utilities in favor of Information Technology, Consumer Discretionary, Health Care, and Communication Services.

Given that value stocks have underperformed for decades, I am sure that many value investors were feeling vindicated and running victory laps and celebrating that their time had finally come. But the more likely scenario is that the segments of the economy that were being disrupted prior to the pandemic, like retail, financials, and energy will revert back to their old, problematic ways.

For those have gone to a physical store since the pandemic, is standing in line for shampoo really that exciting? To quote Oppenheimer retail analyst Jason Helfstein, “The genie never goes back into the bottle”. While Amazon’s Prime Day results were more muted than usual this year, total ecommerce sales during the two-day sale still surpassed $11 billion according to Adobe. That is 6.1% higher than last year’s 2020 event, making Monday the biggest day for digital sales this year and Tuesday the second busiest. Clearly, even though physical stores are now open, consumers still like shopping online thanks to features such as greater convenience, product selection, and rapid delivery options.

The premise of the XOUT ETF is to identify which companies are being vulnerable to industry disruption and secular decline. While many companies may appear on the surface to be a “good value” many of them are so-called “value traps”. XOUT’s passive, rules-based approach takes the emotion out of the decision on which stocks to keep and which stocks to XOUT.

The XOUT strategy delivered outsized returns of 28.7% in 2020, relative to the 18.4% return for its benchmark the S&P 500 TR Index. And while the timing has not been right for XOUT’s investment approach so far this year, that appears to be changing as disruptive growth is once again being rewarded, making the timing of owning XOUT, just right!

Disclosure: I am/we are long XOUT, SPY. I wrote this article myself, and it expresses my own opinions. I am not receiving compensation for it (other than from Seeking Alpha). I have no business relationship with any company whose stock is mentioned in this article.