Our investment thesis on Bitfarms (NASDAQ:BITF) is founded on this very statement:

Bitfarms has a diversified production platform with five industrial-scale facilities located in Québec. Each facility is 100% powered with environmentally-friendly hydropower and secured with long-term power contracts. Bitfarms is currently the only publicly traded pure-play mining company audited by a Big Four audit firm.

This study took an interest in Bitfarms for several reasons. Firstly, Bitfarms' share price is less risky (volatile) than Bitcoin despite its high positive correlation with Bitcoin (Chart 1), unlike Riot Blockchain (RIOT) and Marathon Digital Holdings (MARA). This is shown by computing Bitfarms' Beta against Bitcoin.

Bitfarms' Beta against Bitcoin is 0.975, where MARA's and RIOT's are 1.4 and 1.6, respectively. This implies Bitfarms' share price is expected to move 0.975% (in the same direction) for every 1% move in Bitcoin's price. In Finance, less volatility is often referred to as less risky. This makes Bitfarms less risky than Bitcoin.

Secondly, it has a larger crypto mining operation than other well-known crypto mining companies such as RIOT and MARA. Bitfarms has mined 598 bitcoins in 2021Q1 compared to MARA (196) and RIOT (491).

Last but not least, Bitfarms claims to have a relatively low mining cost of $8,300 despite relying 100% on hydropower. This claim is very important as mining cost should be the most important performance indicator of a crypto mining company. More to be discussed in the next section.

Therefore, this article aims to:

The cost of mining is fairly subjective as it can contain a basket of different items. Some consider labor costs, rental, and leasing, while others consider only electricity costs and wear-and-tear. This study standardizes the cost computations by considering the reported cost of revenue and total costs and expenses.

Table 1 represents the summary table for the mining costs of Bitfarms, RIOT, and MARA. It is observable that MARA has the lowest operating cost per BTC while Bitfarms and MARA have a similar total net cost per BTC. However, one notable difference between Bitfarms and MARA is that Bitfarms operates at 3x MARA's scale and with renewable energy. According to Bitfarms, its operation contributes to more than 1% of Bitcoin's total network.

Although this study couldn't reach the claimed $8,300 mining cost per BTC after considering cost addition to electricity, Bitfarms' mining cost is still relatively efficient compared to other miners. With an estimated $20k total mining cost per BTC, Bitfarms has sufficient margin to withstand Bitcoin's volatility.

At the time of writing, Bitcoin has ended its 1-year bull market started on 18th May 2020 and is potentially starting its bear market as depicted by the halving cycle presented in Chart 2. During each bear market in 2013 and 2017, Bitcoin also followed specific sequences of events. 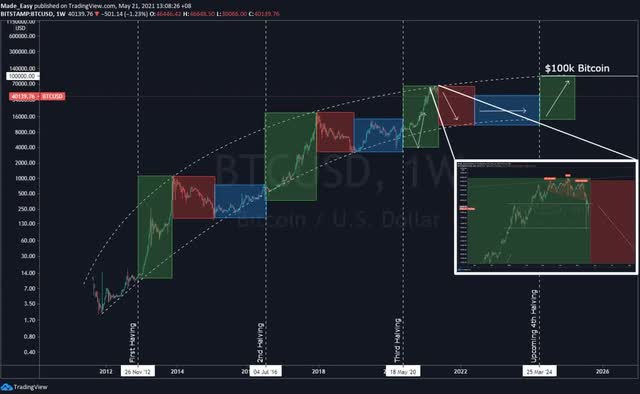 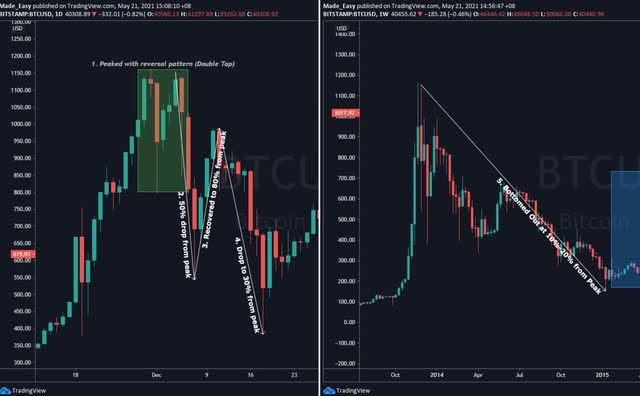 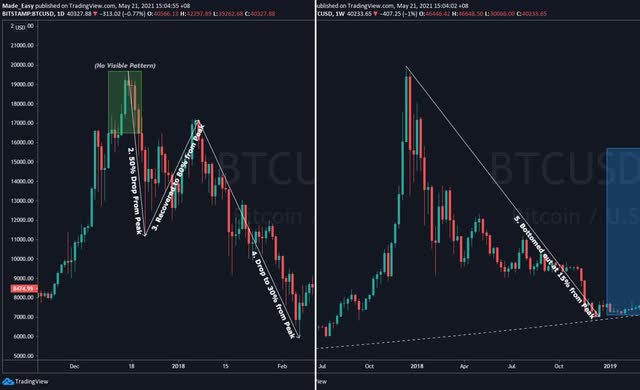 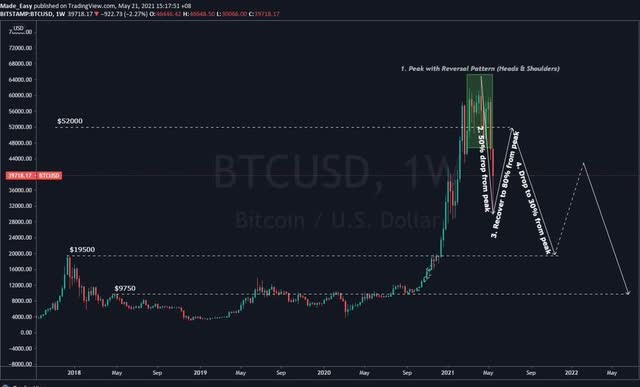 What does this mean for Bitfarms with mining costs of $15k and $20k?

Fortunately, Bitfarms could wait out the bear market with its $53mil cash in its balance sheet. Assuming Bitcoin lingers at $10k during a bear market, Bitfarms would incur a net loss of ($10k - $20k)*598 = -$5mil per quarter. Hence, Bitfarms could still survive approximately 10 quarters (or 2.5 years) with its cash positions. This should provide Bitfarms with sufficient buffer because a typical bear market spans only 1 year.

Unfortunately, a $10k Bitcoin would be detrimental to Bitfarms' valuation. In our previous study, we proposed a valuation framework that a mining company's valuation should be a function of the following items:

Ideally, Bitfarms would try to keep as much mined BTC as possible because of an expectation that BTC would appreciate over time. The lower Bitcoin is priced, the more BTC Bitfarms is forced to sell to cover costs and expenses, ultimately less BTC ends up in the balance sheet.

Items as per the proposed valuation framework are listed below:

Assuming the price-earnings multiple (20) a typical physical mining company such as Barrick Gold Corporation (GOLD) and Vale (VALE), Bitfarms should be valued at:

Bitfarms is currently valued at $622mil. This implies that Bitfarms is 12%, 100%, and 500% undervalued according to its July 2021, end of 2021, and end of 2022 Hashpower figures respectively. This is also a conservative estimation as Bitfarms is earning more Bitcoin for the same computing power and operational costs due to the decreased hash rates from China.

While China's crypto mining crackdown presents growth opportunities for miners outside of China (including Bitfarms), crypto mining companies are not exempted from facing similar risks in their respective jurisdictions.

China's crypto mining crackdown can pave the way to its own centralized digital currency's nationwide (potentially worldwide) adoption. This suggests China recognizes Bitcoin's threat towards its own currency. On the other hand, Peter Thiel recognized the same threat towards the USD. Peter Thiel said:

Even though I’m a pro-crypto, pro-bitcoin maximalist person, I do wonder whether if at this point bitcoin should also be thought of in part as a Chinese financial weapon against the U.S. … it threatens fiat money, but it especially threatens the dollar.

Another risk to consider is the adverse impact of prolonged dip below $20k. This study assumed that Bitcoin will at the most bottom out at $10k before going on to new all-time highs. If Bitcoin were to drop below $20k for a prolonged period of time, this study's cost analysis suggests Bitfarms and other crypto mining companies will struggle to cover operating costs and may be forced out of business. Moreover, prolonged dip below $20k will also reduce Bitfarms’ Bitcoin holding because more Bitcoin has to be sold to cover mining costs. This ultimately affects Bitfarms valuation.

This study first took an interest in Bitfarms because it is less volatile than Bitcoin, it is a pure-play green crypto mining company operating at scale, and ESG concerns create great opportunities for the company.

This study then conducted an in-depth cost analysis for Bitfarms, RIOT, and MARA and found that Bitfarms' total net mining cost per BTC is relatively low ($20k per BTC) compared to RIOT and MARA despite operating on 99% renewable energy.

Based on this cost analysis, this study found that Bitfarms could survive Bitcoin being at $10k for 10 quarters. This provides Bitfarms with sufficient buffer as a typical bear market only spans 1 year, while Bitcoin's halving cycle suggests the current potential bear market would bottom out at $10k.

Made Easy - Finance
1.43K Followers
Thesis | Price Targets | Analytics | Newsletters.We're a team of analysts that focus on researching and deploying transparent and easy-to-follow methodology to suggest conservative price targets for companies. We primarily focus on growth companies and cryptocurrency. Value and dividend companies are covered occasionally..Made Easy - Finance may be directly or indirectly associated with Cornerstone Research.
Follow

Disclosure: I am/we are long BITF. I wrote this article myself, and it expresses my own opinions. I am not receiving compensation for it (other than from Seeking Alpha). I have no business relationship with any company whose stock is mentioned in this article.