Consumer spending is red-hot, and Canada Goose (NYSE:GOOS) is a major beneficiary of shoppers' foray back into fashion. Spurred by the need to return to schools and offices either this summer or later in the fall, retailers have seen a major lift in demand. And all throughout the pandemic, as household wealth and confidence in upper middle-class/upper income families have risen, luxury brands have also seen a pronounced surge in business.

All of these vectors are supporting a new breath of life for Canada Goose, which struggled in the earlier days of the pandemic with retail closures across its sales network, relying primarily on channel partners to move the company's famous >$1,000 parkas. Yet Canada Goose powered through the pandemic, managing costs and leaning heavily on e-commerce to pull the company through. A recent, very strong earnings quarter has also helped to lift sentiment for the stock, and year-to-date, Canada Goose shares have rocketed up nearly ~50%:

The bullish thesis for Canada Goose

In my view, given the demand tailwinds that Canada Goose is enjoying as it heads into the critical winter season that makes up the bulk of its revenue, I think there's plenty of upside still left to go (and ample room on a valuation front to support continued share price appreciation). Canada Goose has also taken the opportunity to start improving its brand image - in late June, the company pushed sustainability initiatives and committed to ending its purchase of fur by the end of 2021 and cease manufacturing of fur products by the end of 2022. In my view, given the brand equity that Canada Goose has already built up with its customer base, I don't view the fur-free move as having a meaningful impact on demand, and potentially removes headline risk for Canada Goose down the road.

Here are the major drivers of the bullish thesis for this company:

In spite of these strengths, I still view Canada Goose's valuation as having ample room for upside.

At current share prices near $44, Canada Goose trades at a market cap of $4.67 billion. After netting off the C$477.9 million of cash and $367.8 million of debt on the company's most recent balance sheet (a net cash balance of $89.2 million in U.S. dollar terms, using the current exchange rate of C$0.81 to the dollar), the company's enterprise value is $4.58 billion.

For the current fiscal year FY22 ending next March, meanwhile, Wall Street is expecting $904.4 million in revenue (+9% to FY20, the most recent year un-impacted by the coronavirus). The company itself, meanwhile, has guided rather ambiguously to >$1 billion (in Canadian dollars) in revenue, which means that hitting exactly C$1 billion in revenue translates to $810 million in U.S. dollars.

Assuming Canada Goose achieves a 28% adjusted EBITDA margin on the consensus revenue profile of $904.4 million (margins flat to FY20, and a conservative assumption given the direct channel mix shift that should benefit margins this year), the company would generate $253.2 million in adjusted EBITDA. This puts Canada Goose's resulting valuation at a reasonable 18.1x EV/FY22 adjusted EBITDA. For a company with so many drivers for continued EBITDA growth, including:

I think a mid/high-teens adjusted EBITDA profile for Canada Goose is quite reasonable, and I think there will be several junctures throughout FY22 for upward estimate revisions. Stay long here - Canada Goose's momentum is just getting started. 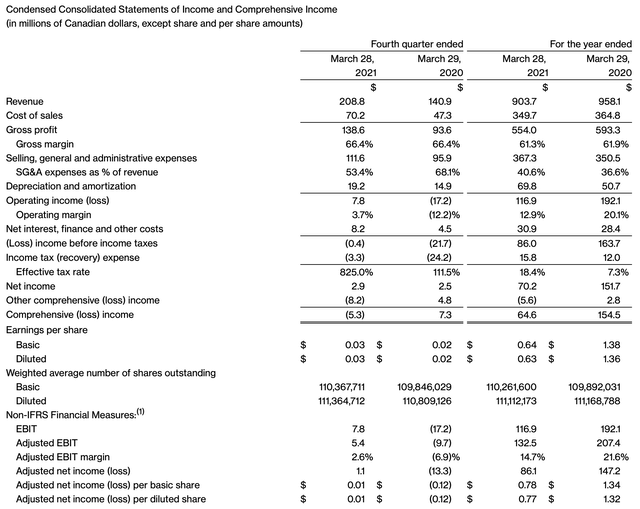 Canada Goose grew its overall revenue at a 48% y/y pace to C$208.8 million, dramatically outpacing Wall Street's expectations of C$137.6 million (-3% y/y). The company's revenue also grew 34% y/y relative to the first quarter of FY19 (two years ago, and before the onset of the pandemic) - reflecting very strong baseline growth and not just an easy comp versus the onset of COVID-19 last year. The company notes strong consumer response to its new Cypress and Crofton style collections, and that a recent multi-year partnership announced with the NBA to design an exclusive style collaboration has also generated interest.

As previously mentioned, e-commerce adoption has been rapid for Canada Goose. The company reported 123% y/y growth in e-commerce revenue, with high double-digit or low triple-digit growth in all of Canada Goose's geographies. China, in particular, saw 101% y/y direct-channel growth. Note that Canada Goose is expecting direct-channel revenue to approach 70% of the overall revenue mix in FY22. This is significant because of the margin differential between Canada Goose's direct and indirect channels: while direct channel gross margins in Q4 were 75%, wholesale gross margins were only 29%, reflecting heavy trade discounts. The more that Canada Goose can shift into the direct channel (the company is expecting e-commerce expansion to continue while wholesale revenues are flat in FY22 to FY21), the bigger the tailwinds to Canada Goose's gross margin/adjusted EBITDA margin profile.

The company is building on its direct-channel strength by leaning into an expansion of its retail store network this year, which is perfect timing as brick-and-mortar shopping traffic rises. Per CEO Dani Reiss' prepared remarks on the Q4 earnings call:

This year, we accelerated our digital strategy. We accomplished in months what was planned over years. This approach was a response to a shift in consumer behavior, driven by COVID but it is underpinned but our focus on shifting forward our strategic plans in order to accelerate continued growth. This achievement has had incredible implications across our business and I look forward to continuing to update you on our achievements across this very important channel in the future.

Looking ahead, we will continue to execute against our long-term growth strategy with 10 new store openings expected for fiscal year '22. In North America, we plan to open in South Coast Plaza, premier shopping destination in Southern California. In Europe, we expect to open three new locations, including two in Germany and another in the U.K. And in Asia Pacific, we plan to expand our retail network, adding six new permanent stores. We continue to be encouraged by the performance of our existing APAC network."

These ten new stores are a significant expansion versus a store fleet that currently only sits at 28. Note as well that nine of these 28 current stores were closed for an average of eight weeks in Q4 (across Europe and Canada), impacting the critical January/February sales period - so the fact that Canada Goose was able to generate 123% y/y DTC channel growth in spite of one-third of its retail store network being impaired is truly impressive.

Gary Alexander
23.79K Followers
Author of Daily Tech Download
Curated research on high-performing tech; winning trades closed monthly
With combined experience of covering technology companies on Wall Street and working in Silicon Valley, and serving as an outside adviser to several seed-round startups, Gary Alexander has exposure to many of the themes shaping the industry today. He has been a regular contributor on Seeking Alpha since 2017. He has been quoted in many web publications and his articles are syndicated to company pages in popular trading apps like Robinhood.
Follow

Disclosure: I am/we are long GOOS. I wrote this article myself, and it expresses my own opinions. I am not receiving compensation for it (other than from Seeking Alpha). I have no business relationship with any company whose stock is mentioned in this article.