On June 25, Origin Materials (NASDAQ:ORGN) went public after its merger with Artius Acquisition was approved. Despite a slew of new customer updates as well as greater transparency that have greatly improved fundamentals, Origin has languished along with the rest of the SPAC market at around the $10 mark. I continue to believe the company has massive potential to thrive in the new ESG focused world.

In April 2021, Origin conducted an Analyst Day where management explained their plans in more detail and gave an update on the business.

Most importantly, customer demand for Origin's products has increased by around $1bil since the February merger to $2.4bil in April. Most of this is in the form of capacity reservations which increased by around $850mil, and demand in negotiation increased by a further $150mil. This is a result of contracts signed with new customers like AECI to develop polymers for apparel and automotive use cases, a partnership with Packaging Matters to develop environmentally friendly packaging, and a partnership with Solvay to develop advanced materials for the automotive industry.

According to Origin management, demand for Origin's products is actually much higher than the numbers indicate and the reason they are not selling out the plant capacity for Origin 1 and 2 completely is to allow new customers with higher-margin use cases to be onboarded.

However, we have decided to reserve capacity to sell to new customers in different industries who have higher margin applications for our materials. We believe this strategy will allow us to achieve a customer diversification that can drive higher growth in the medium and long term.

Based on all these comments, as well as the increasing number of new partnerships signed by Origin, I believe there is almost no chance that Origin will run out of demand for the next decade - If one large customer drops out, there will be many others to take their place. As a reminder, Nestle, Pepsi, and Danone alone will have enough demand for 20 Origin facilities vs 7 facilities expected to be built by the end of 2030.

The other major piece of the puzzle is supply. The first pilot plant Origin 1 is mostly derisked even though it will only start production in 2023, as the plant is "substantially constructed" as of today and all of Origin's modules that contain the proprietary technology have been delivered. Origin 2 is already under project development and will be completed by 2025.

Capital is an important part of the equation, that's why it's good to see that Origin is expected to have nearly $250mil in excess capital after the completion of Origin 1 and 2, which will serve as a hedge against inflation in raw material or other costs.

After researching both Origin and its SPACed competitors Danimer Scientific (DNMR) and PureCycle (PCT), I have no doubt that Origin will be the dominant player in the ESG plastic space. However, I actually think Danimer Scientific has the best product in the space today. Danimer's Nodax PHA is biodegradable in 12-18 weeks in soil, landfills, even the ocean, with no heat or moisture needed. 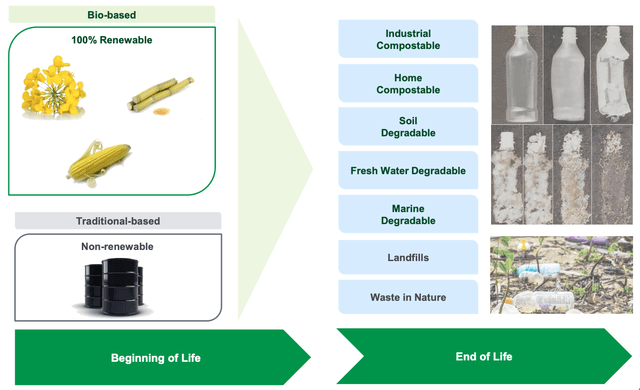 There's one major barrier to mass adoption of Danimer's product, however - Cost of feedstock. Danimer's feedstock comes from canola oil, a very expensive and volatile commodity that is also used for a variety of other purposes like cooking. Canola futures recently changed hands at over $550 USD per ton, a record high level in 13 years due to strong demand for the product from all over the world due to food shortages. 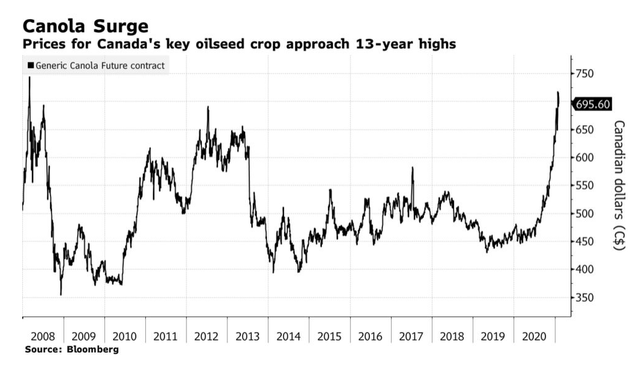 That is the issue with using a food product to produce products like plastics - There is no guarantee of a stable supply and prices could skyrocket without a moment's notice. Thankfully Danimer is still producing at a small scale this year, but when customers are buying a substantial number of products in bulk even a small increase could substantially affect the bottom line. 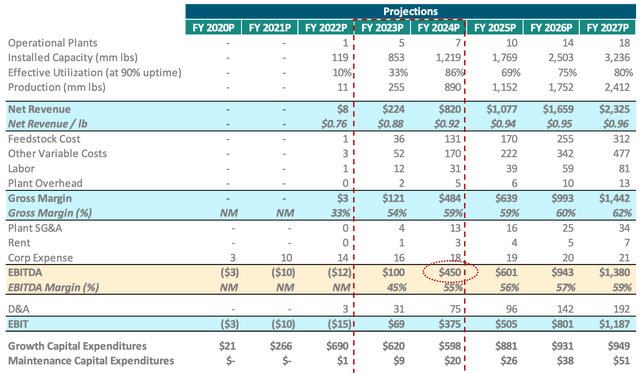 Origin's other major competitor PureCycle is pricing its plastic at nearly $1 per lb, but in comparison, Origin is pricing its own product at $0.29 per lb for its first commercial-scale plant, showing a substantial pricing advantage over the competition. Even with this low pricing, Origin is able to generate contribution margins of nearly 60%.

While biodegradability is certainly important in the long run, I think what will drive the initial adoption of environmentally friendly plastics is price, especially for larger customers who sell billions of bottles, containers, etc. Origin's abundant and low-cost pulpwood feedstock will allow them to maintain their lead in this vitally important area.

SPACs historically have a reputation for dropping below the $10 mark once they go public. However, there have been 2 notable investments made at the $10 mark, which might provide short-term price support to Origin shares.

In mid-June, Apollo announced that it would be investing $30mil in Origin by buying shares directly at $10 per share in addition to the investment by the PIPE investors in the SPAC transaction.

In addition, Artius CEO Charles Drucker has been buying shares of Origin on the open market, in total acquiring $7.5mil in shares near the $10 mark. I haven't seen other SPAC CEOs buy their own stock, so I think this is a massive vote of confidence for the long-term future of Origin.

Overall, Origin's customers are invested in Origin's success, with the three big players - Danone, Pepsi, and Nestle, owning a combined 11% of the company. Similar to other SPAC transactions, holders will not be allowed to sell shares for a year after the transaction unless the price exceeds $12 a share.

So how much should Origin Materials be worth? Based on main comparable PureCycle, Origin should trade at approximately 1.1x 2027E EV/Revenue, or around $1.7bil EV, representing 40% upside, in the base case scenario. This scenario assumes similar pricing to fossil-based PET, according to Origin's FAQ, but in reality Origin would likely price its PET as a premium because of its carbon negative nature. 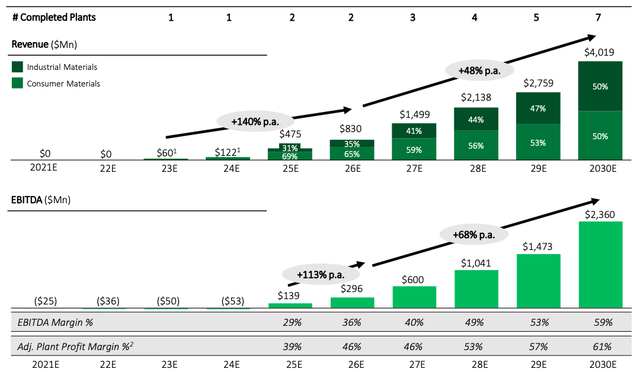 If Origin manages to hit its optimistic projections, it should do $3.3bil in revenues in 2027, which based on the same multiples represents upside of 140%. This assumes Origin secures moderately higher pricing due to strong demand for carbon-negative materials and also assumes Origin adds 2 trains (more production) per plant. 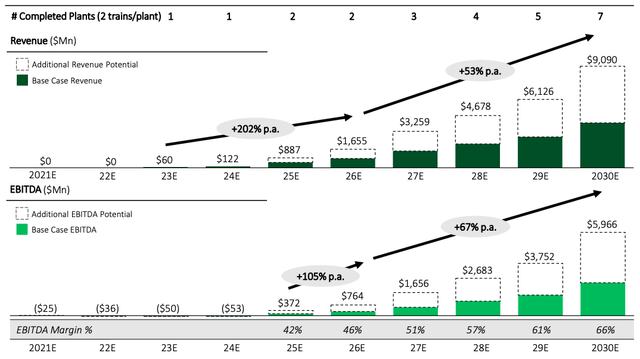 In the long run, I think these price targets are actually very conservative. In the long run, if Origin does manage to replace a material portion of plastic, its valuation should be measured in the tens of billions or potentially even hundreds of billions. These are the kinds of valuations the current oil giants like Exxon (XOM) or Chevron (CVX) are receiving today.

I think there is very little near-term risk regarding Origin 1 and 2 due to a massive cash reserve as well as billions in demand from customers. The biggest risk regarding these 2 projects in my opinion is a COVID-19 resurgence that could push back the completion of these 2 plants or lead to some kind of cost overrun. Also, since Origin 2 is in the much earlier stage of site selection, there is a greater risk of cost overruns or construction delays for this project. From Origin 3 onwards, the company will have to secure additional financing from either the equity or the debt market, exposing the company to major interest rate and capital market risk.

Overall, taking into account the strong demand for carbon-negative plastics, substantial competitive advantages, insider buying, and the strong forecasted growth throughout the next decade, I have a lot of confidence that Origin will reward long-term shareholders, similar to how PureCycle and Danimer have done so.

WY Capital
6.74K Followers
Looking out for underrated companies that could shape the future of humanity, or just provide strong returns over the long run. Note that my opinions could change after conducting more research or based on anything, honestly. DYODD

Disclosure: I am/we are long ORGN. I wrote this article myself, and it expresses my own opinions. I am not receiving compensation for it (other than from Seeking Alpha). I have no business relationship with any company whose stock is mentioned in this article.