Today's data releases brought some real surprises for the market, both good and bad: consumer price inflation in June came in much higher than expected (+0.9% vs. +0.5%) and federal revenues surged.

I've been predicting higher than expected inflation for some time now, so today's numbers were not a surprise to me. The market barely budged, since there appears to be an overwhelming consensus - reinforced by the Fed numerous times - that higher inflation is merely transitory and in fact, welcome, given the Fed's desire to see inflation average well over 2% a year for a few years. I don't see the rationale for these views, however, and I expect to see big changes in market expectations in the next year.

My thesis has been, and continues to be, that the huge increase in M2 that we saw over the past 16 months was initially not worrisome, since the world's demand for M2 money (mostly cash and bank savings deposits) was driven through the roof by the panic and uncertainties generated by the Covid-19 crisis. The peak of the Covid crisis was arguably last November, when successful vaccine trials were announced. Since then new Covid cases have plunged, confidence has soared, and the economy has rebounded sharply, which in turn means that the demand for all that extra money has all but vanished. Unfortunately, the Fed has taken no steps to offset this. This has left the economy with upwards of $3 trillion in unwanted cash (as I have explained in previous posts). Now that prices are surging, the interest rate that the holders of all that cash receive is hugely negative. Who wants to hold $3 trillion in extra cash that is losing purchasing power at the rate of 10% a year? No wonder prices are rising, and they will continue to rise as the public attempts to reduce their money balances in favor of things (e.g., commodities, property, equities) that promise much better returns.

It's simple: The economy is loaded with unwanted cash, and the return on that cash (and the return on almost all fixed-income instruments) is hugely negative. This is an untenable and unsustainable situation, which will cause inflation to rise even more. It will only end when the Fed realizes it has made a mistake and starts jacking short-term rates higher, and/or starts draining cash by selling trillions worth of bonds.

On the bright side, the June Treasury report saw a huge surge in revenues that was largely unexpected. The catastrophic budget deterioration that we saw for the past 16 months now looks to have turned the corner. There is hope for the future! Unless, of course, the Biden administration succeeds in passing another multi-trillion spending lollapalooza. Fortunately, the likelihood of that is diminishing by the day - in my opinion.

Here's a huge and very under-appreciated fact: an unexpected and significant rise in inflation is a boon to federal finances. Why? Because it creates an "inflation tax." Anyone who owns a Treasury security these days is effectively receiving a negative rate of interest that could be as high as 10% per year. The average yield on Treasuries today is somewhere in the neighborhood of 1 - 1½%. So at the current rate of CPI inflation (almost 10% annualized), Treasury debt is "costing" the government -8 ½ to -9% per year. That is, the real value of the debt is declining by that amount. With debt owed to the public now just over $22 trillion, that's like a gift of roughly $2 trillion per year to the federal government! In the 12 months ending June '21, the federal deficit was $2.6 trillion. This year's inflation tax will pay for about 75% of that. In other words, inflation this year will take about $2 trillion out of the pockets of those owning Treasuries and give it to the federal government. Why bother with raising taxes? (Did I mention that this is the way the Argentine government finances itself?)

So it is with mixed emotions that I detail some of this story with charts: 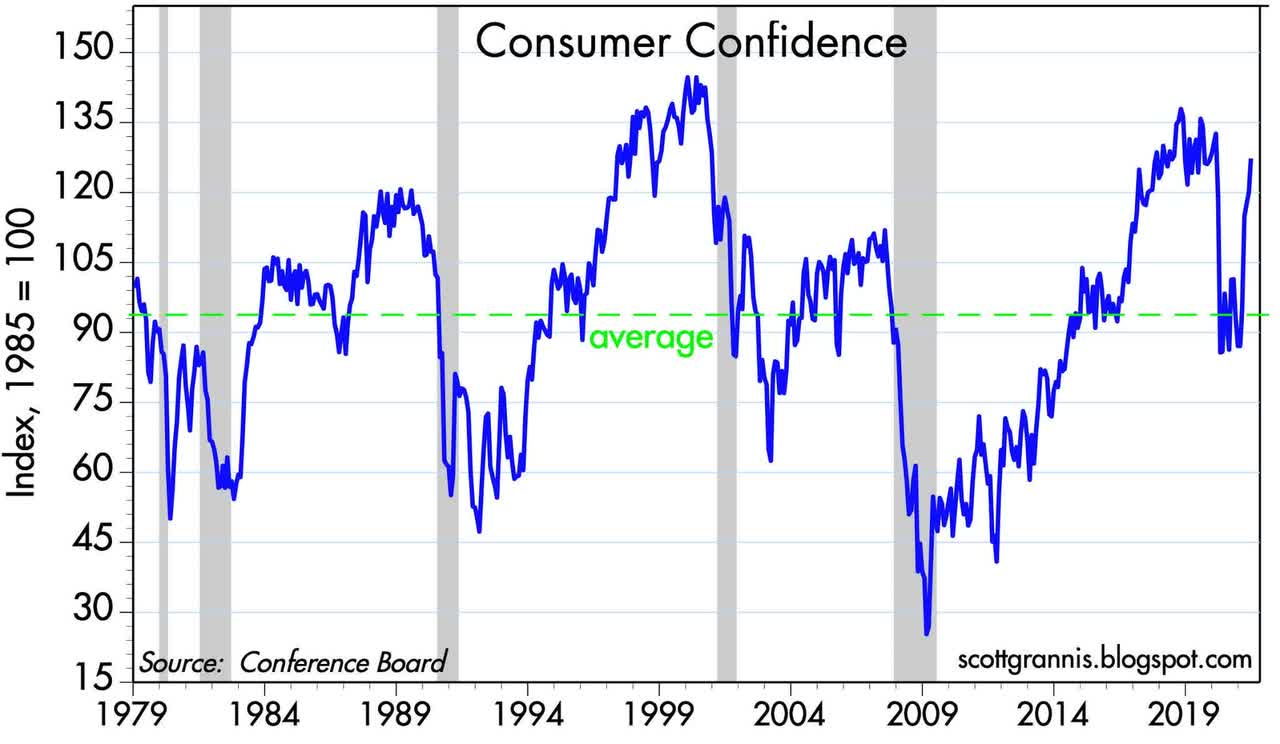 Chart #1 shows how consumer confidence has surged since late last year. The wild gyrations of confidence in the past year explains why the demand for money rose in the first half of last year and is now falling. The future looks much less scary now, so who needs a ton of money sitting in their bank account earning nothing? 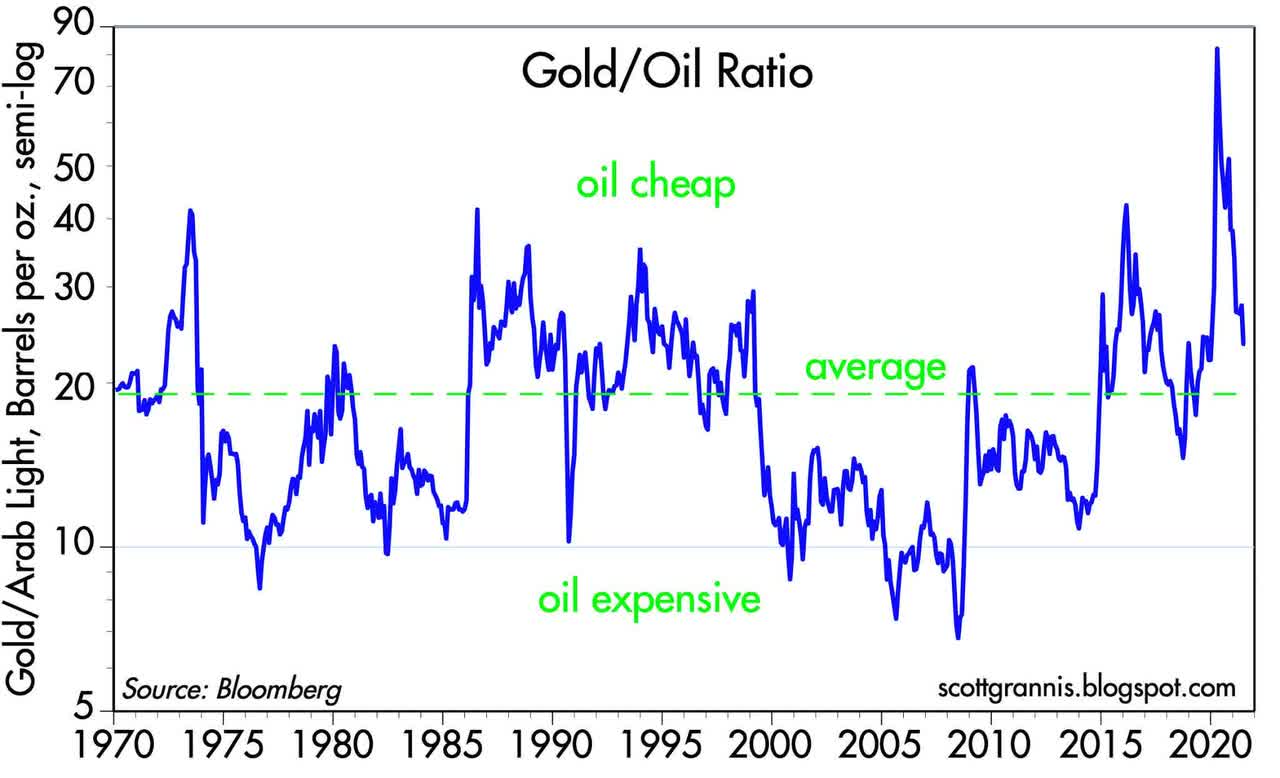 Chart #2 looks at the ratio of gold to oil prices. This ratio has been remarkably stable - on average - over time, with an ounce of gold buying about 20 barrels of oil. Another thing this chart shows is that the prices of these two very different commodities have tended to rise by about the same amount over time. 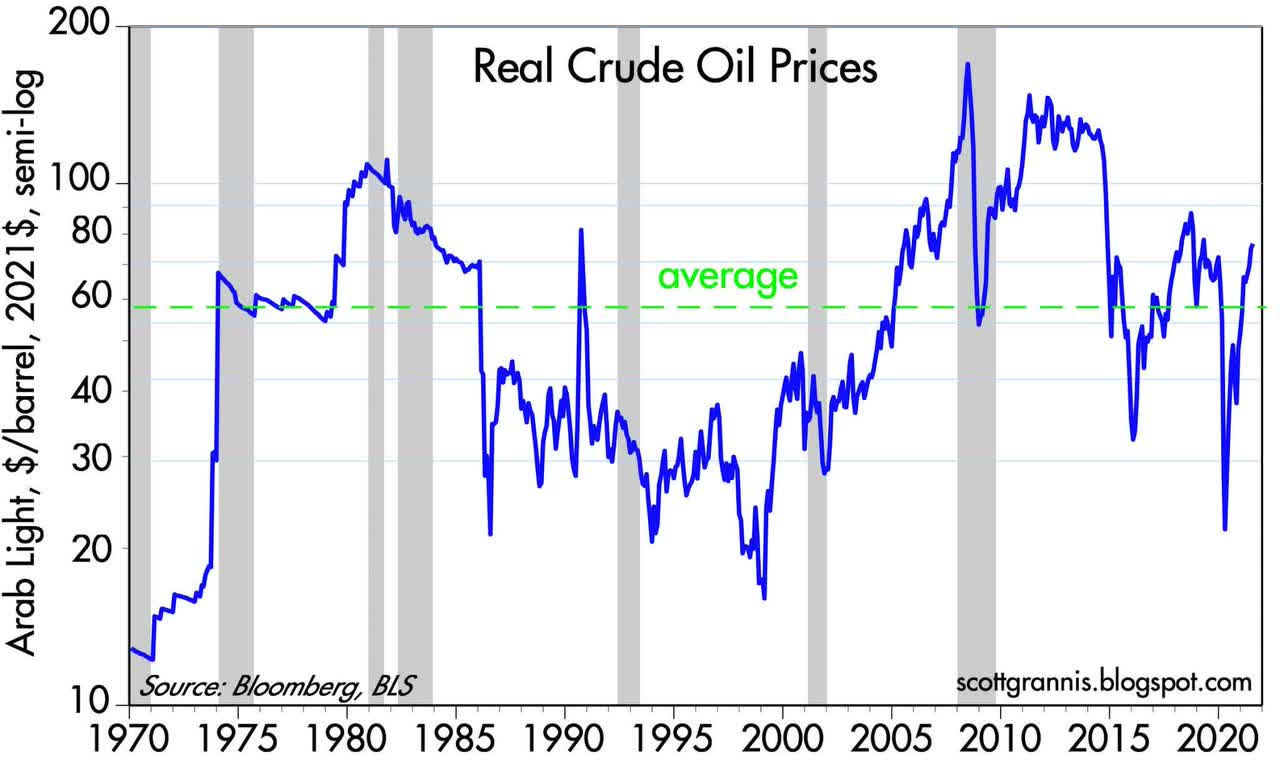 As Chart #3 shows, crude oil today costs about $75 a barrel, which is not a lot more than its long-term inflation-adjusted value of $59. Oil arguably is thus a contributing factor to today's rising prices, but not significantly so. 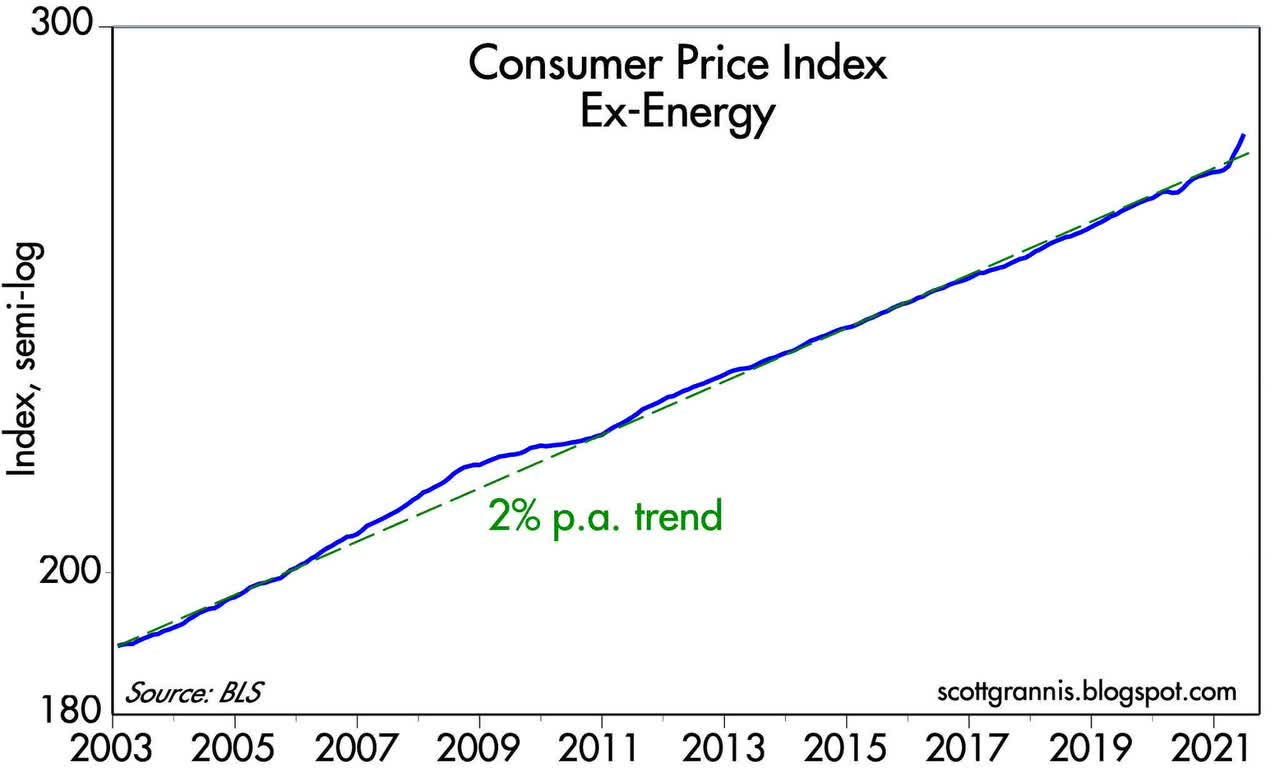 Chart #4 shows the level of the ex-energy version of the Consumer Price Index, plotted on a semi-log scale in order to show that the rate of increase in the prices of goods and services in this basket has been remarkably stable at about 2% per year - until this year, that is. The index so far this year has surged at a 7.4% annualized rate. This cannot be explained away by referring to the fact that prices were soft in the second quarter of last year. We are looking here at an inflation breakout. 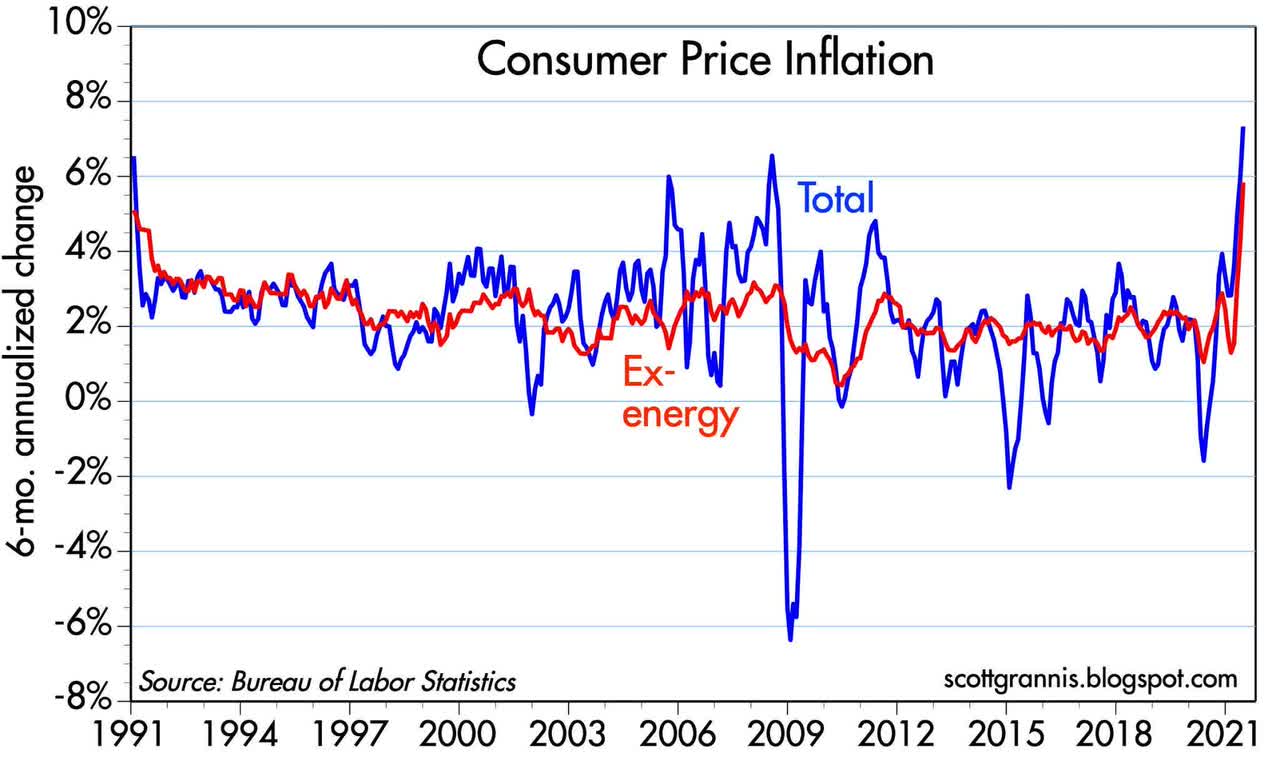 Chart #6 shows the 6-mo. annualized change of both the total CPI and the ex-energy version. We haven't seen inflation like this since the period just before the Great Recession. Recall that the Fed tightening needed to rein in that inflation episode was, I would argue, the proximate cause of that recession. 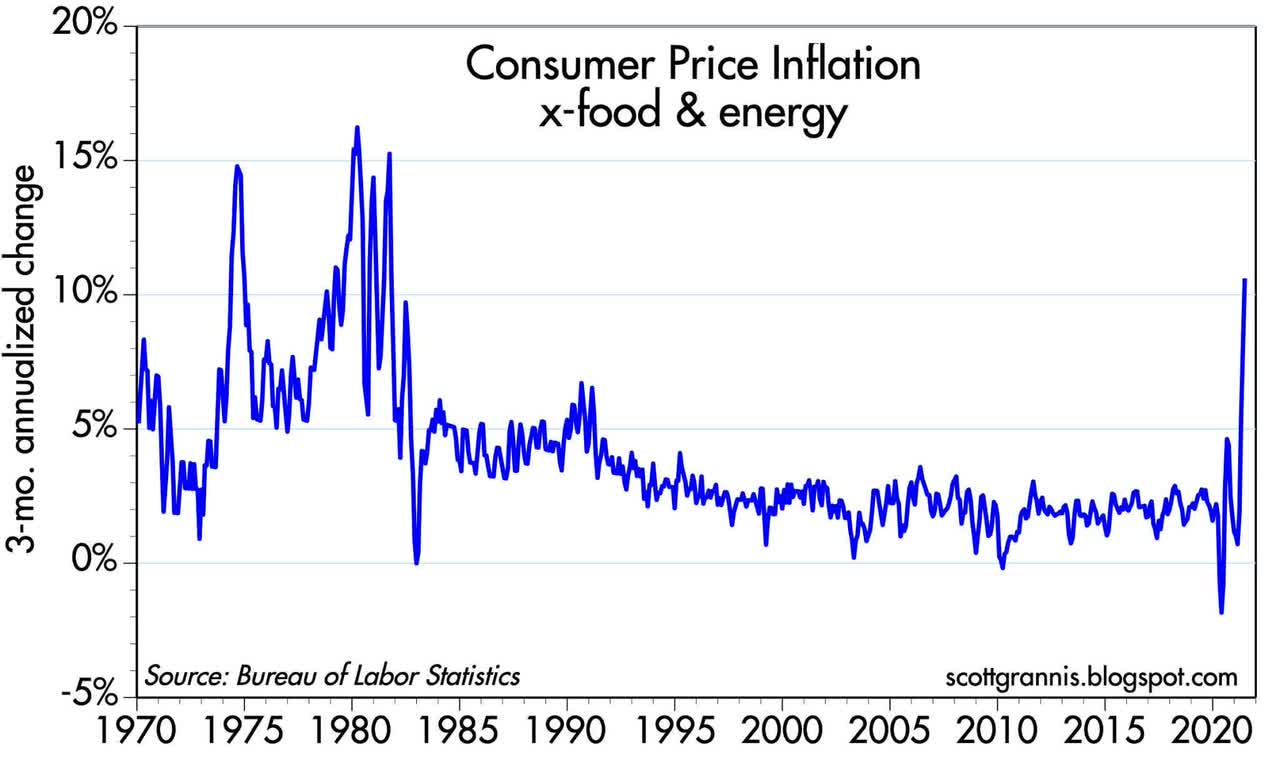 Chart #6 shows the 3-mo. annualized rate of inflation according to the Core CPI (ex-food and energy). This measure of inflation now stands at 10.6%, a level not seen since the early 1980s. 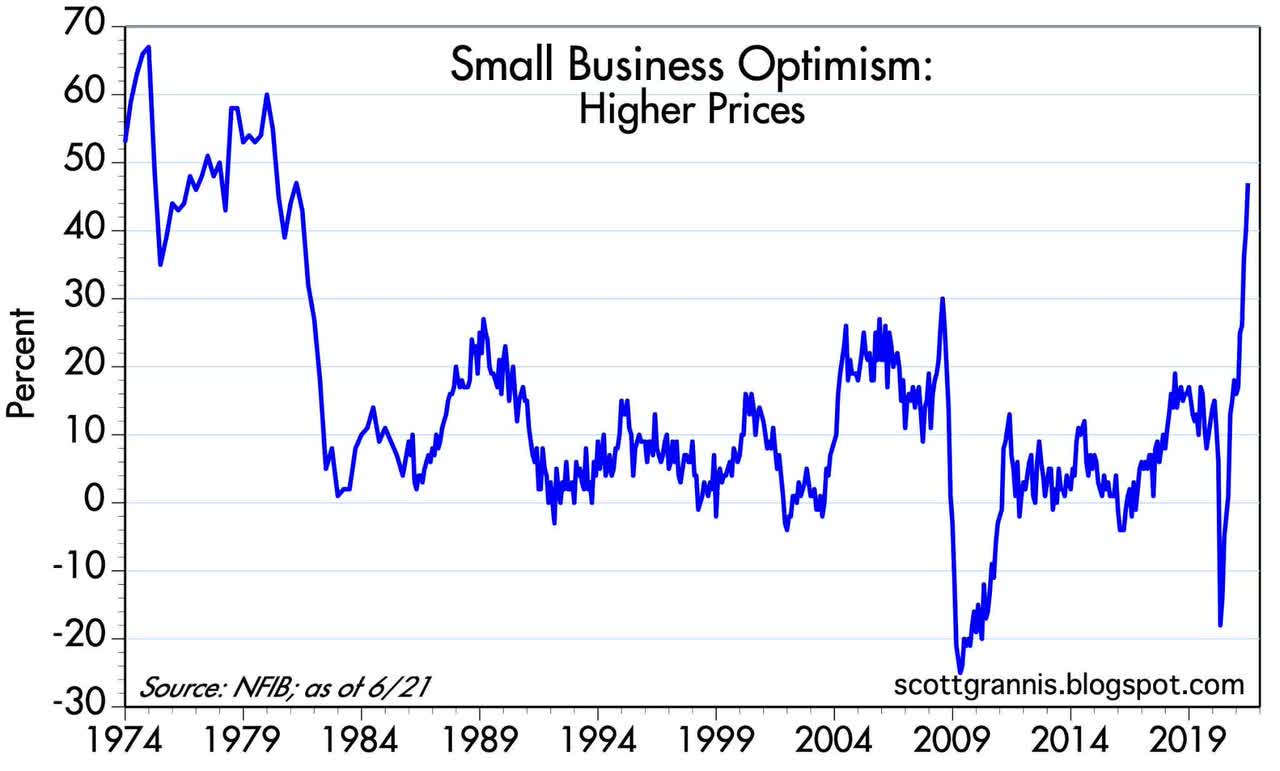 No matter which sub-index of inflation you look at, prices are surging. Chart #7 shows that 47% of small business owners report seeing a meaningful rise in prices. That's a level we haven't seen since March of 1981, when the U.S. economy was still suffering from double-digit inflation. 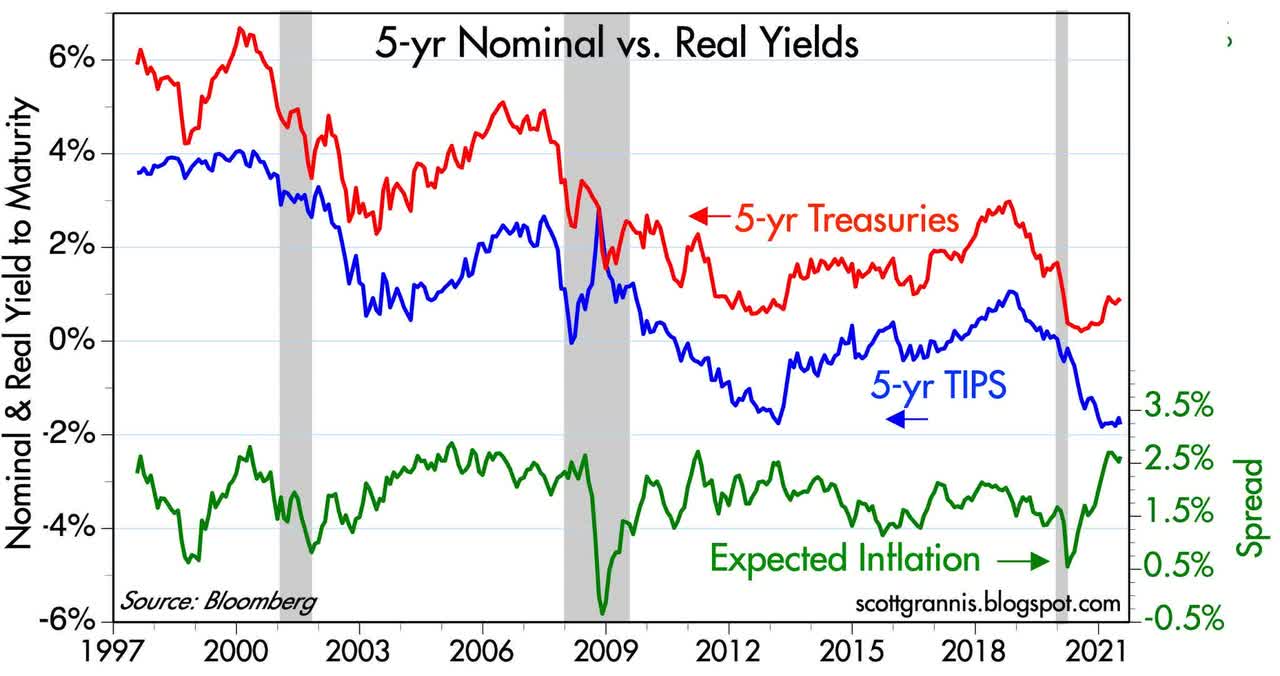 Chart #8 shows the level of real and nominal yields on 5-yr Treasury securities, and the difference between the two (green line) which is the market's expected average rate of inflation over the next 5 years. It's amazing to me that inflation expectations still appear to be relatively tame, despite today's blowout inflation report. 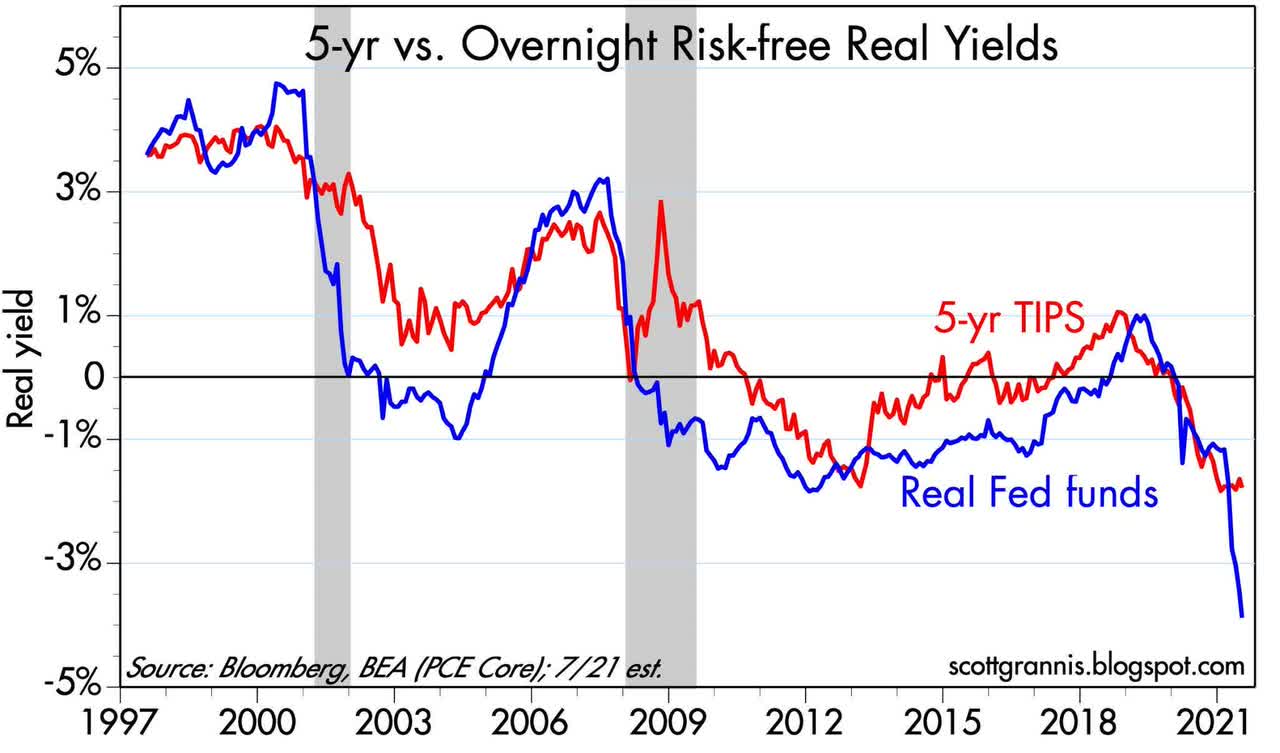 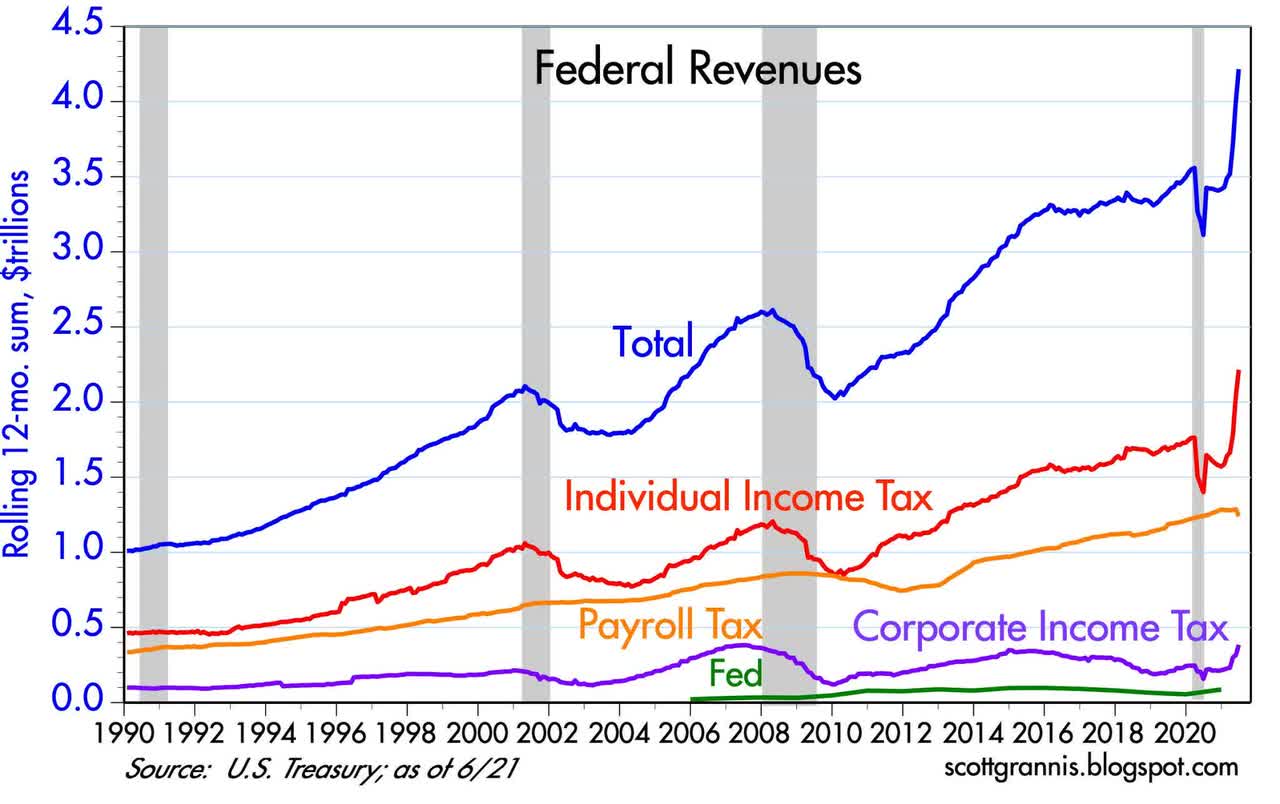 Chart #10 should warm the cockles of many politicians' hearts. All of these lines represent the rolling 12-month total of Treasury revenues from different sources. Note the spectacular increase in individual income tax receipts and corporate income tax receipts in recent months! 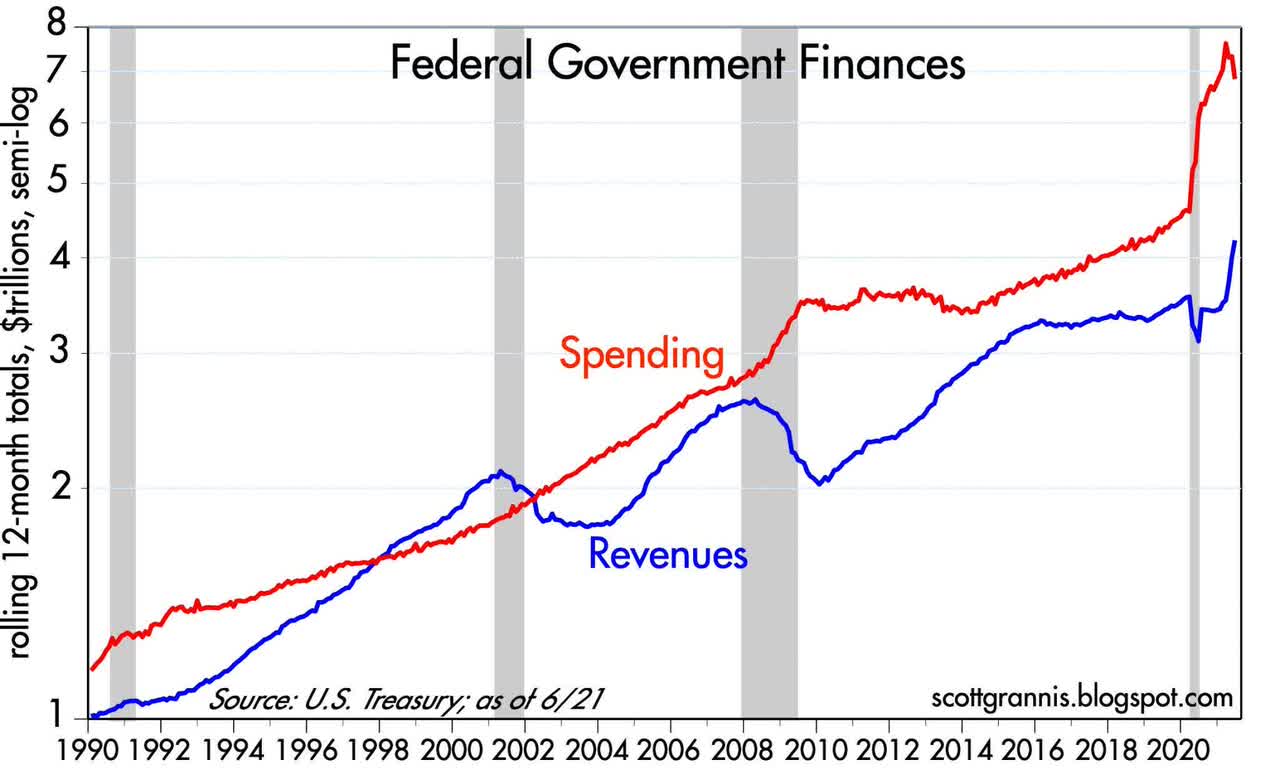 Chart #11 shows the trend of federal spending and revenues. The gap between the two (the deficit) has narrowed in the past few months. 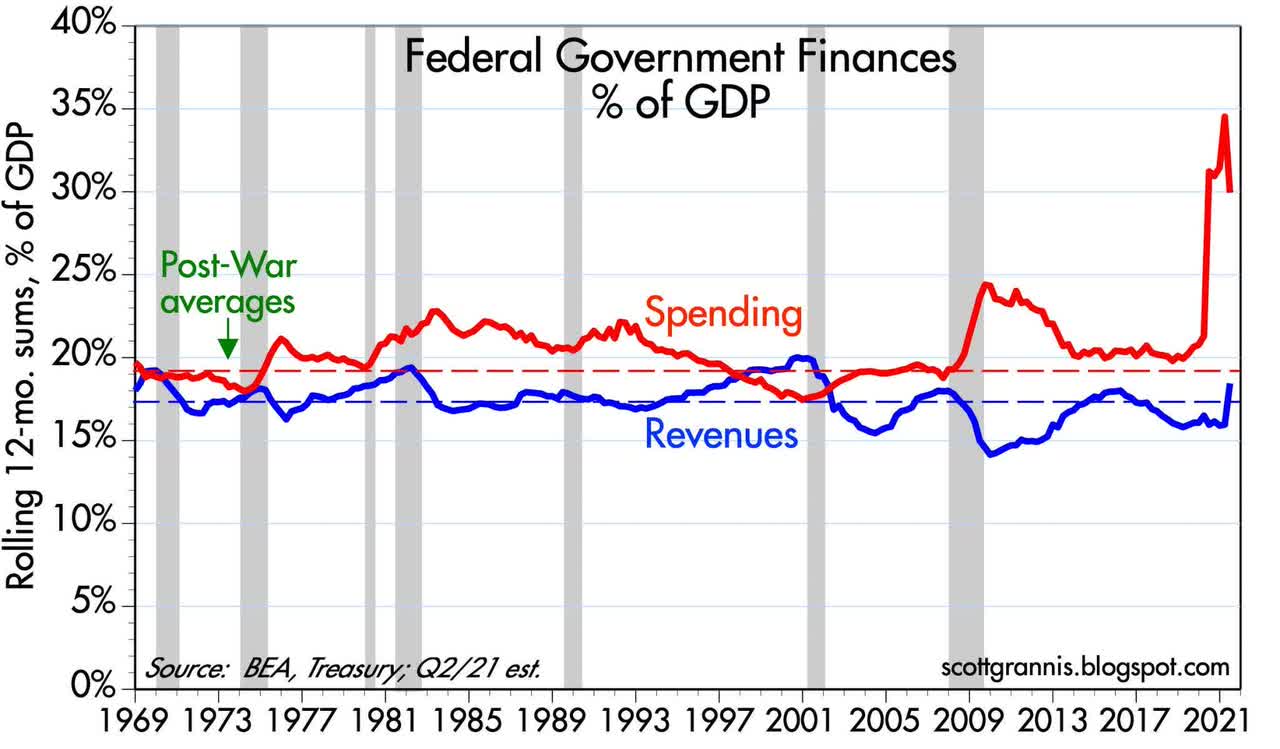 Chart #12 puts federal finances into a proper perspective by measuring each as a % of GDP. Revenues are now coming in at a higher level than the post-war average! Spending is still absurdly high, but declining. 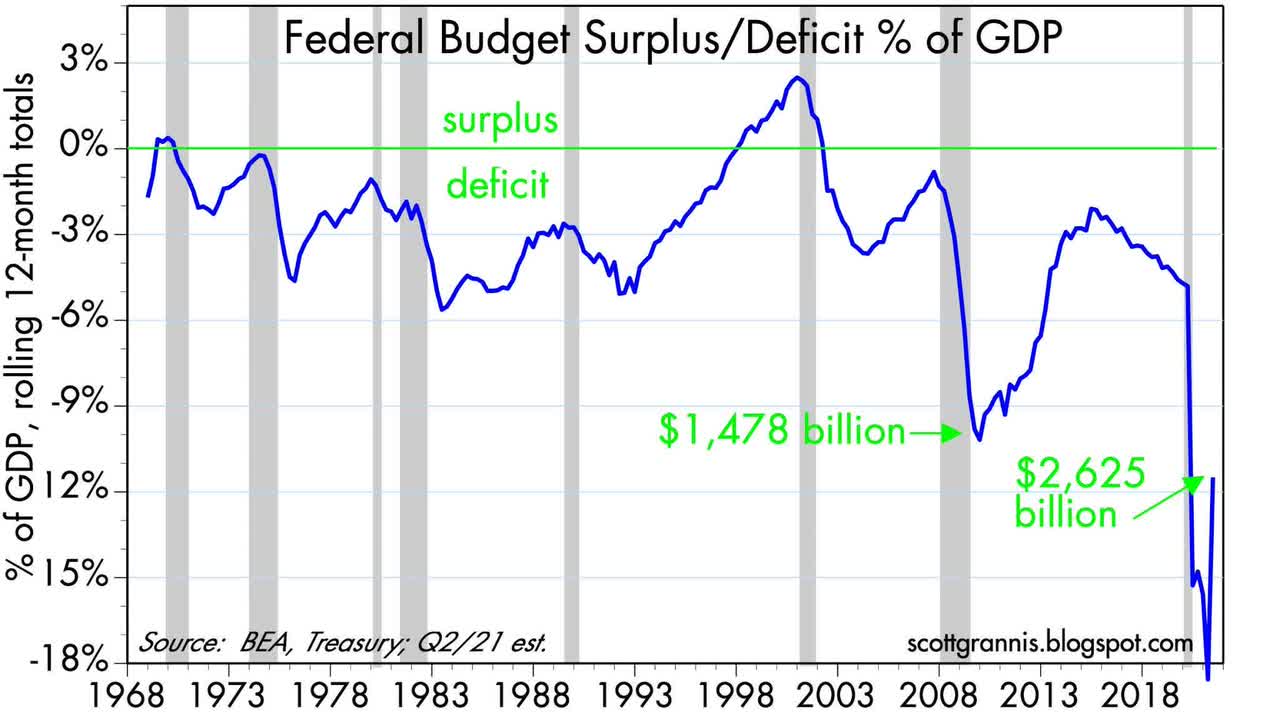 Finally, Chart #13 shows the federal budget deficit as a % of GDP. The deficit soared to an unheard-of level of more than 18% of GDP thanks to trillions of dollars of checks sent out all over the place. The deficit currently is back down to 12% of GDP, which is still absurdly high, but at the rate things are going we should see a further dramatic improvement in the budget outlook in the months to come.

And don't forget the inflation tax, which doesn't show on any of these charts. It could contribute about $2 trillion - effectively - towards paying down the debt this year alone.

It's going to be a wild ride for the foreseeable future, but it's difficult to quantify and it's difficult to recommend a course of action. Despite the potentially huge amount of uncertainty we are likely to be facing in the coming months or years, one thing does not recommend itself, and that is holding cash. Cash has traditionally been the best port in a storm, but that is most definitely not the case today, and neither is holding any short- or medium-term Treasury security.

Calafia Beach Pundit
56.31K Followers
Scott Grannis was Chief Economist from 1989 to 2007 at Western Asset Management Company, a Pasadena-based manager of fixed-income funds for institutional investors around the globe. He was a member of Western's Investment Strategy Committee, was responsible for developing the firm's domestic and international outlook, and provided consultation and advice on investment and asset allocation strategies to CFOs, Treasurers, and pension fund managers. He specialized in analysis of Federal Reserve policy and interest rate forecasting, and spearheaded the firm's research into Treasury Inflation Protected Securities (TIPS). Prior to joining Western Asset, he was Senior Economist at the Claremont Economics Institute, an economic forecasting and consulting service headed by John Rutledge, from 1980 to 1986. From 1986 to 1989, he was Principal at Leland O'Brien Rubinstein Associates, a financial services firm that specialized in sophisticated hedging strategies for institutional investors. Visit his blog: Calafia Beach Pundit (http://scottgrannis.blogspot.com/)