These are not the numbers to put anyone's (rational) mind at ease. China's data dump wasn't terrible, but it didn't need to be in order to amplify concerns about the state of the global economy. What the inflationary case required of the Chinese government instead was unambiguous, inarguable acceleration more consistent with the idea its economy is somehow performing up to that inflation potential.

Again, these are in no way those figures.

On the contrary, the economic accounts make it very clear China is at or past its peak rate for whatever global recovery 2021 might offer. In other words, it really hasn't been much and this doesn't look in any way like it will change (at least not for the better).

Starting at the top (line), according to that country's National Bureau of Statistics (NBS), nominal GDP in Q2 2021 was 12.7% more than during Q2 2020. With base effects still skewing the results, the more appropriate 2-year comparison was a compounded 7.8%. Though the highest since last year's recession, still significantly less than the insufficiently low growth rates which had stubbornly become common in the years before COVID. 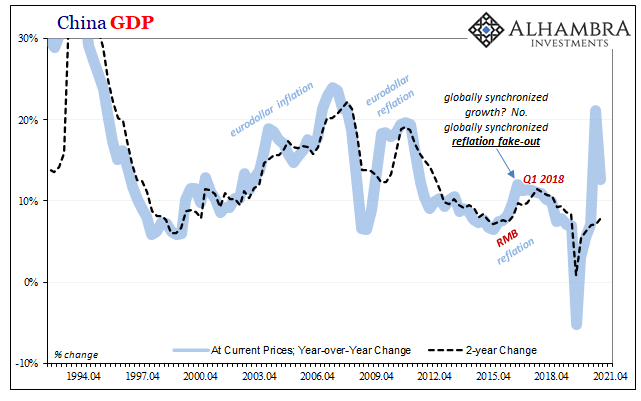 It only goes downhill from here.

In terms of real GDP, or GDP at constant prices, the year-over-year increase in Q2 was 7.9%. The 2-year compounded change another ugly 5.5%. While 50 bps better than Q1, really no different at all than the trend being set by the last five quarters since the 2020 recession.

Like nominal GDP (and pretty much every other estimate here), that 5-quarter "recovery" trend measures substantially less than the declining, decelerating economic condition which in 2018 and 2019 put China on a collision course with what then became the globally synchronized downturn.

If pre-corona growth rates had been consistent with not enough global growth, what does this extended and extending post-COVID condition indicate about global potential moving forward? 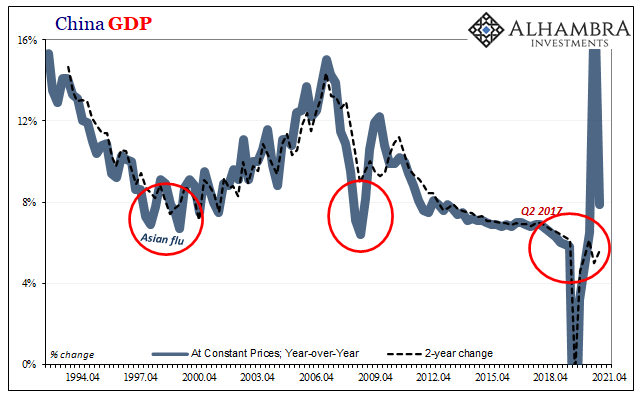 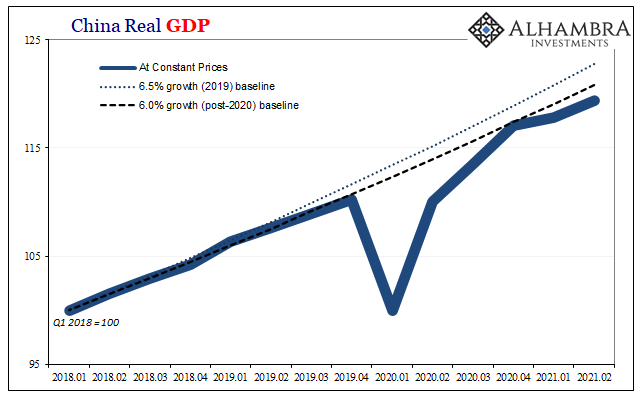 The primary weak spot continues to be China's consumers. The NBS figures that Chinese retail sales were up 12.1% year-over-year, better than expected, but that didn't make much difference sickly; the 2-year compounded change was again sickly below 5%. Before 2018, retail sales had only once (by statistical quirk) ever been less than 8%. 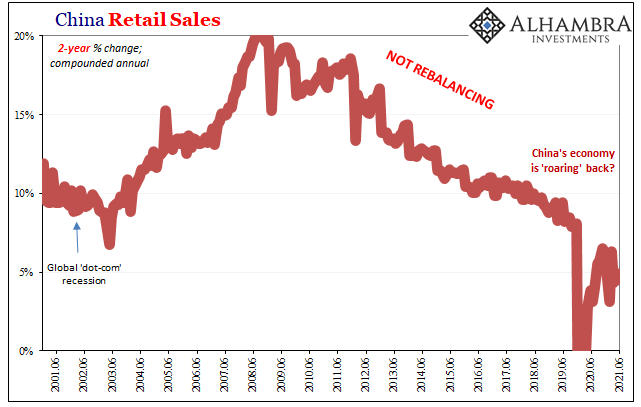 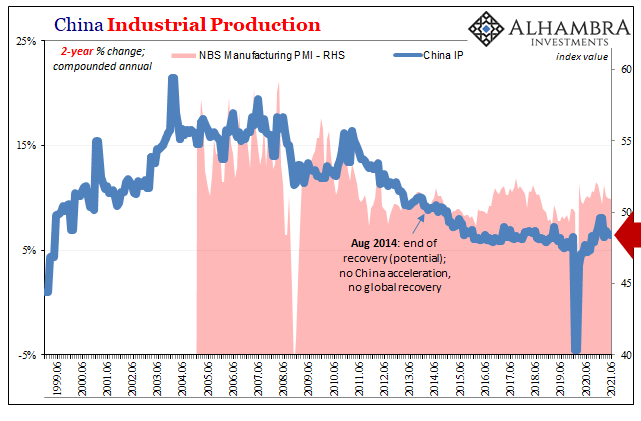 Industrial Production rose 8.3% in June over the previous June, but was up almost the same exact 6.5% compounded annual 2-year. Despite the goods economy on fire elsewhere, particularly the government-fueled US binge, China's vast industrial machine remains stuck like the rest of the economy.

Fixed Asset Investment, or FAI, increased by an accumulated (January through June) 12.6%, down substantially from 15.4% in May (not only reduced base effects). If you do a little math to come up with monthly figures, and their changes, it's clear just how much weakness - more to the point, deceleration - there is in the one place where it should be the most visibly and undisputedly strong and hastening.

Private FAI, the supply side economic potential and miracle of China urbanization and industrialization, in just June 2021 the amount of capex spending was barely 7.6% more than it had been in June 2020 (when monthly private FAI had been less than in June 2019). The 2-year change (accumulated private FAI) was a seriously weak 3.4%. 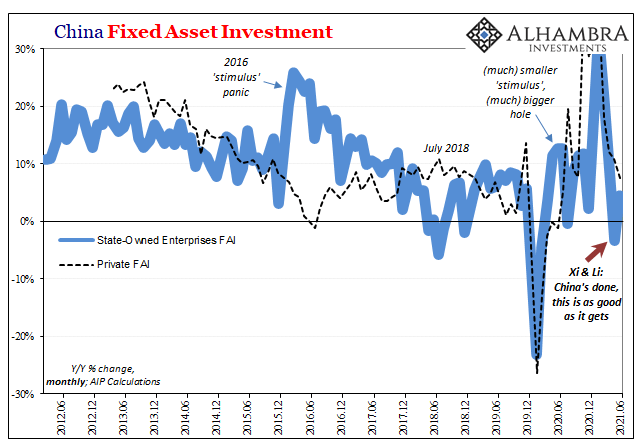 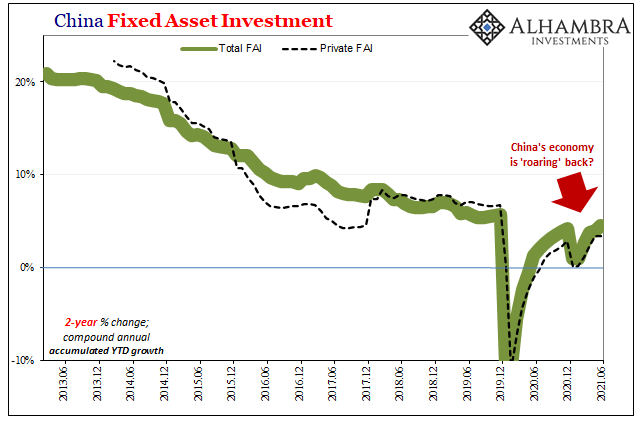 Furthermore, in keeping with published authoritarian doctrine, public sector or State-owned FAI isn't coming to the rescue. On the contrary, the accumulated one-year increase of 9.6% masks the low-level of activity when compared to what had commonly been used in the past as the primary vehicle for delivering fiscal "stimulus." As you can plainly see (above), the Chinese, despite experiencing their first modern outright recession, are doing very little via this channel and are, in 2021, quite purposefully doing even less.

Nowadays, though it's widely accepted China's economy is "roaring" or "strong" (when isn't this the narrative?), largely based on those intentionally using those skewed 1-year changes, over and over we find the opposite case. And not just here or there, every economic account; and not just a month or two, month after month reaching now fifteen months of much less than recovery.

"Somehow", the Chinese system has become less than it had been previously.

That's a huge risk to the global system, even as there isn't (yet) any deterioration in the country's condition. But that's just where the recent RRR cut comes in. An acknowledgement from authorities about China's potential more than the rest of this year.

This [RRR cut] is uniformly described as "stimulus" when…it doesn't end up stimulating anything. The reason is that these correlations, and the causal chain behind them, are nothing but unfixable trouble. Thus, whenever the RRR is reduced, rather than view it as "stimulus" you need to see it as a warning - that this causal reverse is becoming such a serious problem that the PBOC figures it has few other alternatives (because, in truth, it doesn't).

The world had been looking for, expecting, and really counting on a whole lot more before this year from China. Half of 2021 now gone, and it's pretty clear that not only did the economy fail to live up to those expectations (hype), it seriously underperformed them, and then even worse while more to the point (of falling bond yields), those might still end up being the rebound's best days anyway. 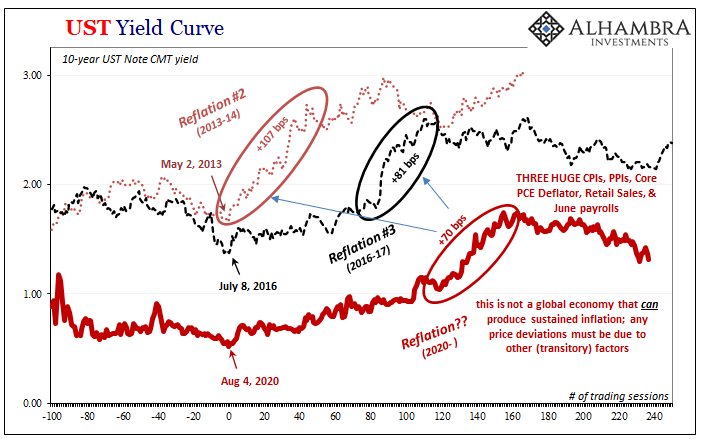 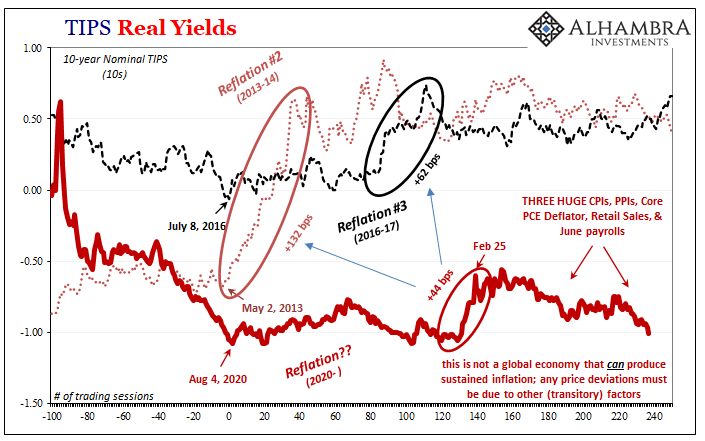 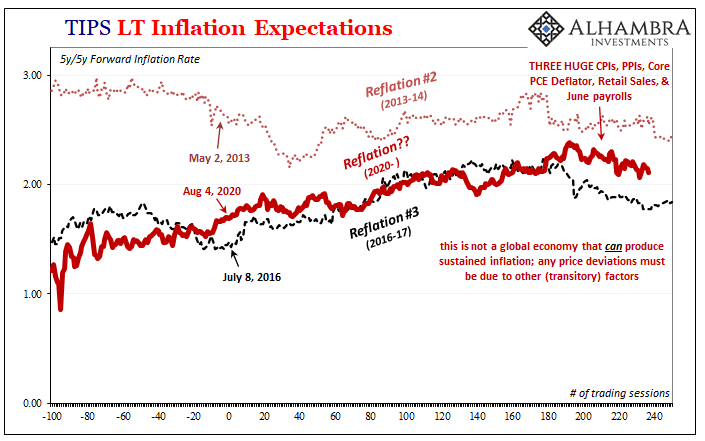 In other words, across-the-board not enough already and not a single sign or indication of acceleration and growth to change that. You just aren't going to get inflation from a wounded China stuck at an even lower level than the one which had already kept the last inflation hysteria from being fulfilled (though the Chinese were hardly alone in that regard).

Like it or not, combined with collateral, the risks continue to tilt more and more toward the downside. Global factors.

Jeffrey Snider
4.65K Followers
As Head of Global Investment Research for Alhambra Investment Partners, Jeff spearheads the investment research efforts while providing close contact to Alhambra’s client base. Jeff joined Atlantic Capital Management, Inc., in Buffalo, NY, as an intern while completing studies at Canisius College. After graduating in 1996 with a Bachelor’s degree in Finance, Jeff took over the operations of that firm while adding to the portfolio management and stock research process. In 2000, Jeff moved to West Palm Beach to join Tom Nolan with Atlantic Capital Management of Florida, Inc. During the early part of the 2000′s he began to develop the research capability that ACM is known for. As part of the portfolio management team, Jeff was an integral part in growing ACM and building the comprehensive research/management services, and then turning that investment research into outstanding investment performance. As part of that research effort, Jeff authored and published numerous in-depth investment reports that ran contrary to established opinion. In the nearly year and a half run-up to the panic in 2008, Jeff analyzed and reported on the deteriorating state of the economy and markets. In early 2009, while conventional wisdom focused on near-perpetual gloom, his next series of reports provided insight into the formative ending process of the economic contraction and a comprehensive review of factors that were leading to the market’s resurrection. In 2012, after the merger between ACM and Alhambra Investment Partners, Jeff came on board Alhambra as Head of Global Investment Research. Currently, Jeff is published nationally at RealClearMarkets, ZeroHedge, Minyanville and Yahoo!Finance. Jeff holds a FINRA Series 65 Investment Advisor License.