"Food is our common ground, a universal experience." – James Beard

The Invesco Dynamic Food & Beverage ETF (NYSEARCA:PBJ) is an investment vehicle that looks to capitalize on the prospects of food and beverage companies based in the U.S. To be considered for selection, these companies need to be "principally" involved in the manufacture, sale, or distribution of food & beverage products, agricultural products, and products related to the development of new food technologies. The ETF also stretches its tentacles to consider companies involved in the manufacturing of agricultural inputs (livestock, crops, etc.), wholesale and retail suppliers of grocery and processed foods, and those involved in food and beverage services such as restaurants, dining establishments, etc. As you can see from the chart below, PBJ dabbles with a range of sub-segments within this broad food and beverages (F&B) landscape. 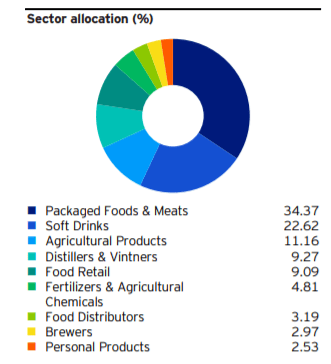 That said, despite this seemingly diverse exposure within F&B, do consider that this is quite a focussed ETF as you only get access to a little over 30 stocks; considering this limited pool I reckon PBJ has done relatively well to keep the concentration of the top-holdings to less than ~50% (45% to be specific). The other aspect that I like about PBJ is that it looks to be market-cap agnostic and spreads its wings across large (~37%), mid (~26%), and small-caps (~37%) without going overboard with any pocket; thus you get the high growth potential of small-caps/mid-caps and the relative safety and shareholder distribution prowess of large-caps.

PBJ is not without flaws, and there are some aspects of the ETF that are a bit troubling. Firstly, I worry about the high level of churn of the portfolio holdings which has been a recurring facet for quite some time now. Most ETFs within this space typically see an annual portfolio turnover rate of just around 35%; whereas with PBJ you can see that it has tended to oscillate between a gargantuan range of 100 and 150%! This would see them shed out some inordinately high brokerages which would eat into the overall returns. A high portfolio rate can also result in an increase in taxable capital gain distributions which is not ideal.

Defensive segments such as consumer staples by their nature tend not to have the same sort of growth and return profile of segments such as tech and consumer cyclicals, so to see such a high turnover rate makes it doubly harder for the likes of PBJ to deliver sufficient returns during a broad upswing in the markets.

In addition to that, PBJ does not come across as particularly cost-efficient, with an expense ratio that has been growing over the years and currently stands at a relatively steep level of 0.64% of average net assets.

Having covered some of the drawbacks, let me now focus on some of the reasons why potential investors may consider PBJ at this point. Essentially there are two broad reasons; the first one is tied to the current underlying fundamentals in the staples sector, and the second one is more a case of market positioning based on risk conditions. 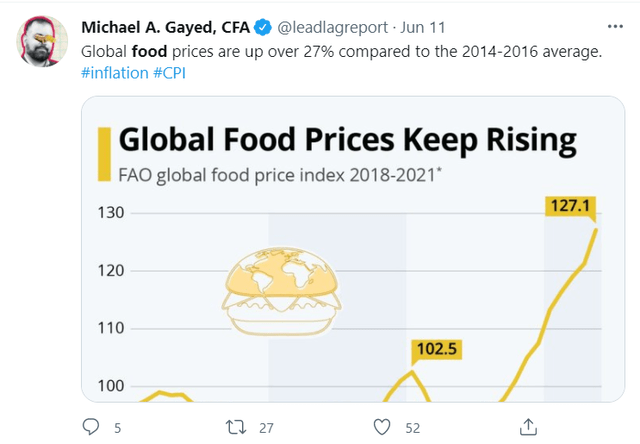 Earlier this week, we saw CPI inflation numbers come out, with the annual growth of 5.4% representing the highest jump since the GFC. Elevated food prices were one of the chief contributors to the ongoing inflation trend which does not look like it is going away soon. Whilst a lot of industries can often face crippling pressures due to inflation, the staples sector is less immune to these as it can comfortably pass on rising input costs to end-users without worrying about demand collapsing, as the demand for most of its products are inelastic in nature. As pointed out recently in The Lead-Lag Report, nearly 70% of the consumer staples stocks within the S&P 500 have, or are, in the process of passing on these costs to end-users which should enable them to protect their margins. 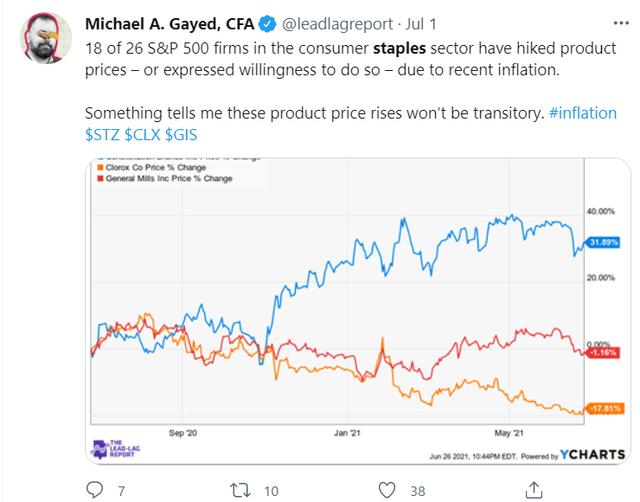 Currently, it doesn’t look like this is going to be an ephemeral phenomenon as food shortages are rising across the world and the supply isn’t quite able to keep pace, which will likely keep prices elevated. 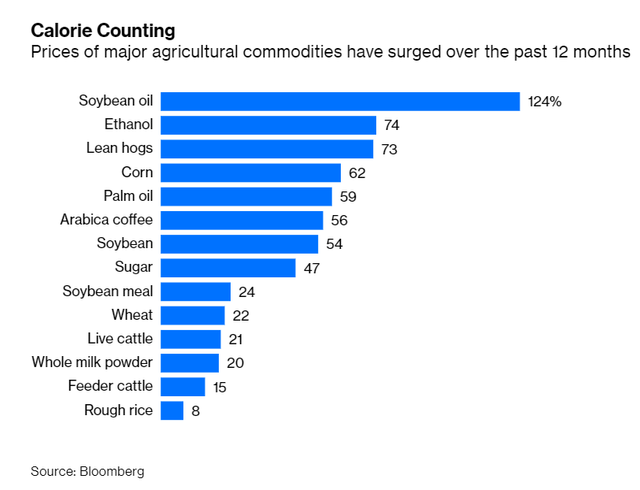 Also do consider that PBJ has a few agriculture and livestock-based stocks that directly benefit from this effect of heightened agricultural prices. A couple of months back, I had brought to attention the alluring market fundamentals in the Soyabean space. Not an awful lot has changed since then. In the US, drought-like conditions will likely impact the supply of key crops such as corn and soybean, whilst latest reports also suggest that corn and soybean production for 2021-22 has already been maxed out and demand will likely exceed supply for the second year in a row. 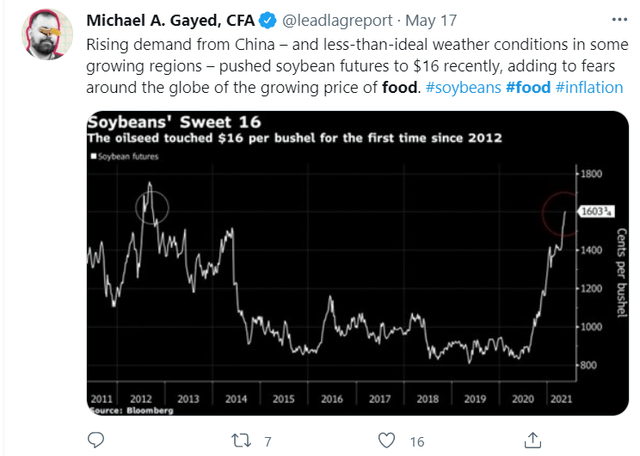 Besides, standard supply/demand challenges, I also recently highlighted issues within the supply chain. Across the pond, food-based industries are currently grappling with wide-scale labor shortages in the field of transportation. 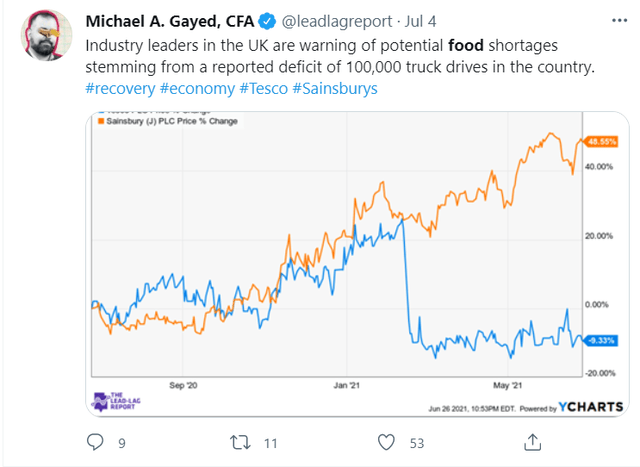 The second reason why I think PBJ may prove to be an ideal option is its superior defensive qualities during periods of heightened volatility. If you’ve been following my tweets or if you’ve been reading some of my opinion pieces in The Lead-Lag Report, you’d note that I’ve been highlighting plenty of risks that will likely come to the fore in the weeks ahead, resulting in a likely pivot to risk-off mode.

The delta-variant is causing a nuisance around the world with a number of countries tightening restrictions again; do consider that even here in the US we’ve seen an alarming spike in cases, up 47% last week, the highest since April 2020! Then we’ve seen inflation risks recently crop up and the labor market is still a long way from normal. Crucially, there’s also the issue with the US debt ceiling and the infighting within Washington on account of this, which may prompt rating agencies to revise their stance. I believe the bond market is sniffing this risk and that's why you saw long-tenure yields breach the 1.3% mark despite heightened inflation. Also, consider that small-caps have been exhibiting lingering underperformance for a while now suggesting that investors are taking risk off the table. Considering all these inter-market signals, it would make sense to transition towards defensive mode.

Over the past year, PBJ has underperformed the S&P 500 but there’s potential for this to change in H2. 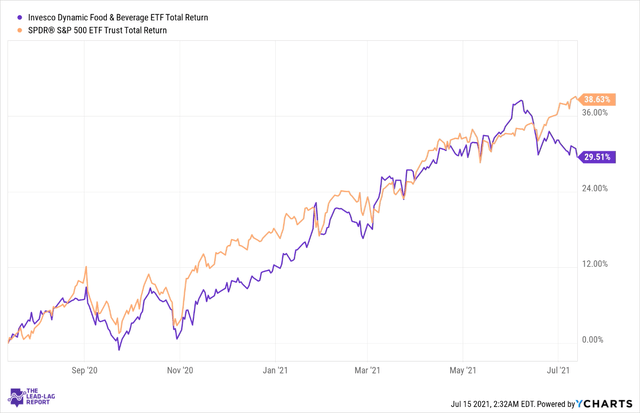 Conditions in the food and beverage space look very supportive and PBJ’s low-beta qualities (3-year beta of 0.6, 10-year beta of 0.7) could provide ample armor during a likely higher volatility cycle in the markets. PBJ can be used as a satellite option to help negate some of the potential weakness of the core portfolio. Valuations too are very supportive with the ETF currently trading at a forecasted P/BV of just 0.6x and a forecasted P/E of 14x. Contrast this with the SPY which trades at corresponding multiples of 3x and 22x, respectively.