Co-produced with Beyond Saving

Agency MBS is a source of great opportunity that we have highlighted several times over the past year. Some have been asking about the impact of inflation on these mREITs. These investments are not directly impacted by inflation as they do not carry any credit risk and what's happening in the housing market does not have a direct impact. However, these mREITs are impacted by interest rate movements.

Our outlook is that the interest rate curve is likely to steepen as the Federal Reserve maintains strict control on the short-term rates and long-term rates rise with inflation. This makes agency mREITs a fantastic opportunity. We recommend sticking with the highest quality management with AGNC and NLY.

The Fed Is Ignoring Inflation: Get 9% Yield From Their Mistake

For about two years, we have been talking about "agency" mortgage REITs. These mREITs are a source of high yields and are in a sector that many do not fully understand. AGNC Investment Corp. (NASDAQ:AGNC) yields 8.9%, and Annaly Capital Management (NYSE:NLY) yields 10.4%.

The Federal Reserve is asleep at the wheel, ignoring the risks of inflation and choosing to keep its target rate near zero. As a result, inflation is going to run hot, and as investors, it's on us to figure out how to benefit from that. Agency mREITs are not directly impacted by inflation, but they are impacted by changes in interest rates.

The Federal Reserve holding the line at zero, even as inflation picks up, is a gift for agency mREITs. They will benefit from being able to borrow at near-zero rates while the yield they receive from their investments will go up with the long end of the interest rate curve.

Investors can take advantage of the Fed's actions, or lack of action, while collecting a healthy yield by investing in agency mREITs.

What Are "Agency" mREITs?

These are mREITs that invest primarily in MBS (mortgage-backed securities) with a principal guarantee from a government-sponsored enterprise like Fannie Mae or Freddie Mac.

The agencies guarantee the principal of the mortgages. If a borrower defaults, the agency buys back whatever principal remains on the mortgage at full price. Therefore, there's minimal "credit risk" for investors in agency MBS. In other words, the investor does not need to worry about whether or not the borrowers can pay their mortgage, what their credit scores are, what the value of the collateral is, and other typical metrics we would use to estimate the risk of default. Whether the borrower pays their mortgage or not is irrelevant, MBS investors will receive 100% of the par value.

Of course, to make profits requires taking on some risk. So what kind of risk do these mREITs profit from? Rate risk. That is, agency mREITs take a very low-risk investment, and they "leverage up," using borrowed funds to improve their return on equity. Agency mREITs profit from the difference between the interest rate they pay to borrow and the interest they receive from their assets.

Agency mREITs borrow short-term debt and hold long-term assets. They are profiting from the difference between 30-90 day yields and 10-year yields. 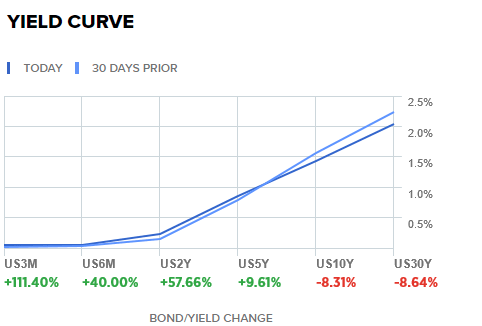 By understanding the interest rate curve, we can understand why agency mREITs are so strong right now and why conditions will get even better, with inflation likely to push the long end of the curve higher.

Here's a look at AGNC's net interest spread over the past two years: 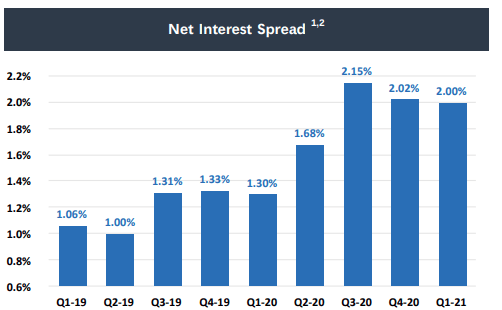 In 2020, AGNC's net interest spread nearly doubled. This has driven their income higher. 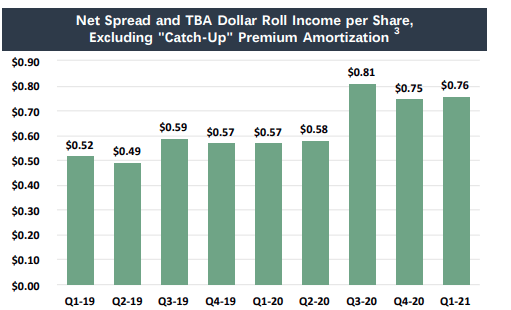 AGNC has gone from barely covering their dividend to having a substantial excess and on target for a dividend raise before the end of the year. The primary driver of this trend has been their low cost of funds.

The cost of funds is AGNC's average interest expense, including the positive or negative impact of hedging. 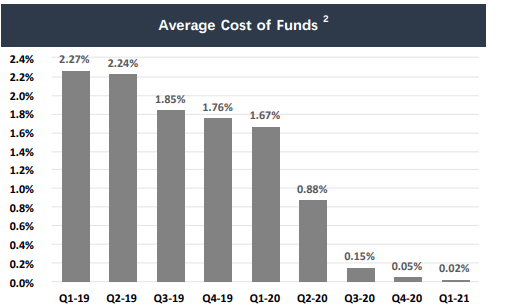 While beneficial for their cost of funds, low-interest rates also impact the yields they receive. AGNC has seen yields decline from 3.33% to 2.02%: 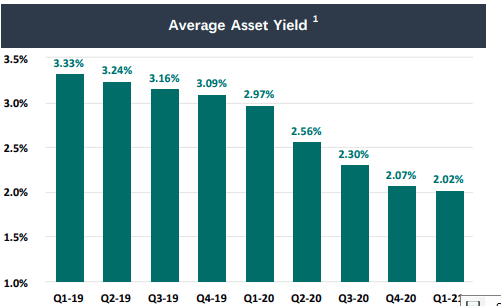 We have been discussing the likelihood of inflation running above the Federal Reserve's expectations. One expected impact from inflation is that long-term interest rates will rise as investors require a higher yield to be willing to hold an asset that doesn't mature for 10 years. MBS yields can be expected to rise as well. 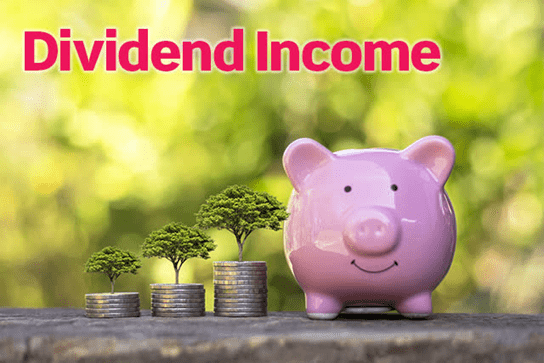 Agency mREITs recently sold off after AGNC reported that their book value declined in May. As we noted above, yields can be expected to rise with inflation, and MBS yields have been going up.

Rising yields mean that the value of the existing MBS goes down. This is a headwind to book value for agency mREITs. A common hedge to protect book value is to hold a short position on U.S. Treasuries. As noted above, agency MBS correlates with 10-year Treasury rates.

The key thing that investors should understand is that "correlation" does not mean that the prices move in lock-step. It means that they generally go in the same direction most of the time. Sometimes they don't. Especially over short periods. AGNC's book value declined in May because Treasury prices were flat while MBS prices declined.

Some investors like to trade agency mREITs based on book value. They are actively jumping in and out as book value changes month to month. We don't. We're investing for the income, and the cost of agency MBS coming down is essential to growing income further.

With the cost of funds already near zero, it's unlikely to go lower. This means that net interest spread can only improve by the yield on MBS going up. By definition, this means that the value of already held MBS will go down. Hedging positions will offset those declines, but there will be periods where Treasury rates rise slower than MBS rates, causing book value to decline.

This impact will be temporary as lower MBS prices will result in higher income, and Treasuries will eventually climb as well. It's also worth noting that AGNC has significantly reduced its leverage. 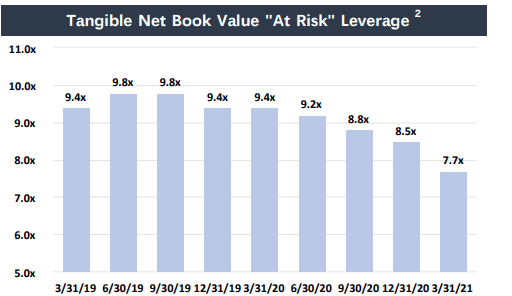 AGNC has quality management that recognizes the inevitability of MBS prices coming down. AGNC is building up cash and reducing leverage, waiting for an opportunity to buy at lower prices and higher yields. The rising income will offset a little turmoil in their book value.

When The Fed Raises

Agency mREITs will remain strong as their cost of funds remains very low, while the yields they receive from MBS rise. What happens if the Federal Reserve surprises with an early rate increase?

One feature that is very different today than we saw in the last cycle is that interest rate swaps are available at much lower rates. These swaps lock in low-interest rates. AGNC has nearly $50 billion covered by swaps with an average pay rate of 0.18% and matures in an average of 4.7 years.

NLY has just under $40 billion covered by swaps with a pay rate of 0.8% and matures in an average of 3.28 years. We expect that in the coming months NLY will be increasing its swap positions to take advantage of the current prices.

In other words, if the Fed increased rates to 1% tomorrow, AGNC would still be paying an average of 0.18% on $49.725 billion in debt and NLY would be paying 0.8% on $39.816 billion in debt. Those low rates would be maintained for several years. This provides a long runway for AGNC to adapt to changing conditions.

Understanding agency mREITs is all about understanding how changes in Treasury yields impact them. These mREITs thrive when long-term rates are high relative to short-term rates. These are precisely the conditions we expect to persist over the next few years.

The Federal Reserve has clearly telegraphed that they will allow inflation to run hot and that they do not intend to raise the target rate until 2023. This will ensure that the cost of funds remains very low. Meanwhile, we can expect longer-term rates to climb as inflationary pressures build.

AGNC and NLY are both well-positioned to "average down" as MBS prices drop and to grow their income even more. Income investors can take advantage of the dips that are caused when traders chase book value, confident in the knowledge that the dividend is secure and will likely be raised by the end of the year.

If you want full access to our Model Portfolio and all our current Top Picks, feel free to join us for a 2-week free trial at High Dividend Opportunities.

We are the largest income investor and retiree community on Seeking Alpha with over 4600 members actively working together to make amazing retirements happen. With over 40 individual picks yielding +7%, you can supercharge your retirement portfolio right away.

We currently are holding a limited-time sale with 10% off your first year! 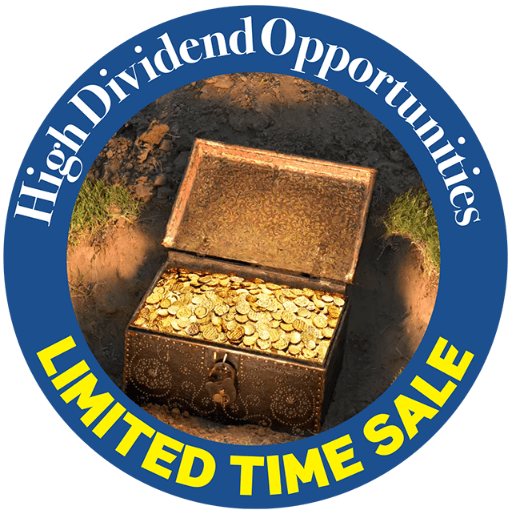 Our unique Income Method fuels our portfolio and generates yields of +9% along side steady capital gains. We have generated 16% average annual returns for our members, so they see their portfolio's grow even while living off of their income! 7500+ members have joined us already, come and give our service a try! Join us for a 2-week free trial and get access to our model portfolio targeting 9-10% overall yield. No one needs to invest alone.

In addition to being a former Certified Public Accountant ("CPA") from the State of Arizona (License # 8693-E), I hold a BS Degree from Indiana University, Bloomington, and a Masters degree from Thunderbird School of Global Management (Arizona). I currently serve as a CEO of Aiko Capital Ltd, an investment research company incorporated in the UK. My Research and Articles have been featured on Forbes, Yahoo Finance, TheStreet, Seeking Alpha, Investing.com, ETFdailynews, NASDAQ.Com, FXEmpire, and others.

Disclosure: I/we have a beneficial long position in the shares of AGNC, NLY either through stock ownership, options, or other derivatives. I wrote this article myself, and it expresses my own opinions. I am not receiving compensation for it (other than from Seeking Alpha). I have no business relationship with any company whose stock is mentioned in this article.

Additional disclosure: Treading Softly, Beyond Saving, PendragonY, and Preferred Stock Trader all are supporting contributors for High Dividend Opportunities.
Any recommendation posted in this article is not indefinite. We closely monitor all of our positions. We issue Buy and Sell alerts on our recommendations, which are exclusive to our members.