High yield doesn’t have to equate to high risk, especially when considering companies that have done right by shareholders over the long-term. In this article, I present 2 such opportunities yielding 6-7% that investors may count on for durable income.

Both names actually raised or paid supplemental dividends over the past 15 months, since the start of the pandemic. That’s important, because steady and growing income is what investors need the most during trying economic times. Let’s delve into both and see what makes them worth owning for rich income and growth.

BCE (BCE) is a telecom giant and is the largest of the Big 3 carriers in Canada. It provides Wireless, broadband internet/TV, Wireline services to 10 million customers, constituting about 30% of the market. Additionally, BCE has a media arm that consist of Canada’s top brands such as CTV, V, TSN, and RDS. It also has exclusive Canadian distribution rights to HBO, Showtime, and Starz.

This distinguishes BCE from its Canadian peers. Rogers Communications (RCI) is the only competitor to have media assets, and BCE’s media assets are viewed as being vastly superior. As seen below, BCE is well-diversified, deriving 52% of its revenue from wireline (mostly from broadband and TV), 37% from Wireless, and the remaining 11% from Media.

Unlike its U.S. counterpart, AT&T (T), BCE has shied away from making expensive, value-destructive acquisitions. Management has proven to be good stewards of shareholder capital, and this is reflected by Morningstar assigning BCE an Exemplary rating for capital allocation, comparing favorably to the Poor and Standard ratings for AT&T and Verizon (VZ).

This is demonstrated by BCE’s moat-worthy scale advantage that it’s built up over the years in the Wireline segment, in which it’s the industry leader. This results in cost advantages over peers Rogers and TELUS (TU), as it’s able to spread its fixed costs over a larger subscriber revenue base. Plus, BCE is furthering its scale with its recent FTTH (fiber to the home) build out. This further enhances BCE’s moat, and serves as a deterrent against new entrants.

Admittedly, BCE isn’t the fastest growing name in the telecom space. As seen below, BCE’s consensus annual growth rate through 2023 sits higher than U.S. counterparts AT&T and Verizon, but lower than Canadian counterparts Rogers and Telus.

(Created by author based on Seeking Alpha data)

Also, BCE isn’t the cheapest name in the telecom space. It’s EV/EBITDA of 10.5 is cheaper than that of Telus, and higher than the rest of the pack, as seen below.

However, I find the valuation to be reasonably low considering the overall quality of the enterprise and its moat-worth assets. Risks include currency fluctuations for U.S. investors, renewed COVID-19 risks that could negatively impact the prepaid business due to reduced travel and immigration, and competitive pressures in the wireless and media spaces.

Meanwhile, BCE sports a strong balance sheet with a BBB+ credit rating from S&P. It has a robust $6.5 billion available liquidity to fund growth investments, and has a reasonably low net debt to EBITDA ratio of 3.2x, considering the FTTH and 5G growth initiatives.

This lends support to BCE’s high 5.9% yield, with a dividend to FCF payout ratio of 89%, and a 5-year dividend CAGR of 6.2%. While the payout ratio is somewhat high, I expect for it to trend down as profits are expected to grow over the next few years. BCE is a high-quality Buy for high-quality income and growth.

Sixth Street Specialty Lending (TSLX) is one of my favorite picks in the BDC sector. It invests in U.S. based middle-market companies, as defined by those with annual EBITDA in the $10-$250M range. It benefits from its association to its external advisor, Sixth Street, a leading global investment firm with over $50 billion in assets under management.

This affiliation gives TSLX line of sight into the deal environment and enables it to source opportunities that it would not otherwise have. Plus, TSLX has a rather safe investment profile, with 95% first-lien debt, just ~1% second-lien and riskier mezzanine debt, and 4% equity for potential upside. This structure helps with principal recovery in the event of a loan default.

TSLX also invests primarily in recession resilient businesses with less than 2% exposure to hotels, gaming, and leisure, and its top 10 borrowers represent just 30% of portfolio fair value, with no one borrower representing more than 4%. Most of TSLX’s loans have LIBOR floors, and that’s one of the reasons for why it’s maintained a steady weighted average portfolio yield over 10% since the beginning of last year, as seen below. 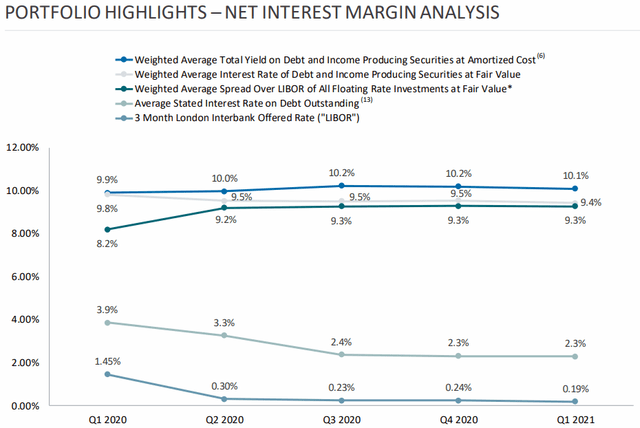 This, combined with a robust dividend has resulted in TSLX outperforming its two well-regarded peers, Main Street Capital (MAIN) and Ares Capital (ARCC) over the past 5-years. As seen below, TSLX has posted an impressive 125% total return over this timeframe, comparing favorably to the 74% and 115% returns of MAIN and ARCC, respectively.

Management charges a reasonable 1.5% base fee, which is in-line with that of industry juggernaut, Ares Capital. It’s worth noting, however, that TSLX is not as efficient as internally-managed MAIN and externally-managed ARCC.

As seen below, I calculated an expense ratio of 3.5% for TSLX, which is slightly higher than the 3.0% of ARCC and 2.2% of MAIN. While I wouldn’t expect for TSLX to achieve the same level of efficiency as MAIN, I do see potential for its ratio to get closer to that of ARCC as TSLX continues to grow its asset base in an accretive manner, by raising equity at a premium to NAV.

(Created by author based on company financials)

TSLX remains well-capitalized, with a debt/equity ratio of 0.9x, sitting well below the 1.5x level that I prefer to see for BDCs, and below the 2.0x regulatory limit. This lends support to the 7% dividend yield with a safe payout ratio of 81% (for a BDC). Plus, TSLX is known for paying supplemental and special dividends, which boost the total yield.

Of course, no investment is risk-free. BDCs are generally sensitive to macroeconomic disruptions, given the relatively smaller size of their portfolio companies compared to publicly-traded companies. Plus, external management opens risks for potential conflict of interest, and competition for deals may result in lower portfolio yields.

Turning to valuation, I find TSLX to be attractive at the current Price/Book ratio of 1.39x, sitting more or less in line with its historical range. This puts it in between the same ratios for MAIN and ARCC, both of which have posted lower total returns than TSLX. Meanwhile, investors get to enjoy a well-covered 7% yield with supplemental dividends. TSLX is a high-quality BDC Buy.

Disclosure: I/we have a beneficial long position in the shares of TSLX either through stock ownership, options, or other derivatives. I wrote this article myself, and it expresses my own opinions. I am not receiving compensation for it (other than from Seeking Alpha). I have no business relationship with any company whose stock is mentioned in this article.