This article will take a look at Advent Claymore Convertible Securities&Income Fund (NYSE:AVK). The convertible securities sector has been quite hot of late and the distribution looks quite attractive. While the distribution has been covered over the last 3 years, that looks to be largely due to great performance over the last 12 months. While AVK is okay, I think there are better options out there.

I want to own CEFs that pay me a stable flow of income. I have developed a method of determining whether a specific CEF could provide a reliable stream of income. I developed my method after reading this article. My thinking is that rather than the share price, how the portfolio of the fund behaves and the income it generates is the determining factor in the reliability of the distribution. I look at a specific CEF and apply that method to determine if the fund has been supporting the distribution. Then based on current holdings and past performance, I try to determine whether or not the fund will be able to support the distribution in the future. You can read an explanation of my method and get links to the other articles in the series here.

Since I want to own funds that distribute a reliable stream of income, I first look at how much income their holdings have generated over the last year and whether or not they have had enough returns to cover the distribution they pay. A high distribution isn't attractive to me if the fund will be eating itself to pay it.

So, let's first look at how much AVK's portfolio earned over the last year.

I measure the returns from the fund's portfolio by looking at the NAV total return (which is similar to total return but uses the fund's NAV rather than share price). Over the last year, AVK has had a total NAV return of about 38.7%. This appears generous and quite attractive, but many funds have squandered such returns by paying too high a distribution. Let's next look at how the NAV has done over the last year.

NAV increased by 28.6% over the last year but seems to have slowed since March. Peak NAV (not entirely clear on the graph) is $20.78. The average NAV over the last year was $18.71. Next, let's look at the distributions for the year.

The distribution remained unchanged at 11.72 cents per month for the last year. While I am happy to see no cuts, there were also no increases.

Since results for a single year can be impacted by factors that don't tell us a lot about how a fund is sustaining its distribution long term, and thus a good indicator of future performance, I next look at how the distribution has been covered over the last 3 years. So as always we start with how much return the portfolio generated.

Total NAV return has been 49.3% (total for the 2 years, not an annualized number) with a 3-year CAGR of 14.25%. That looks pretty good, but I will note that most of that was generated in the last 12 months or so. Looking at the CAGR over just the first 2 years it is just under 5%.

So, how did the NAV do over the last 3 years?

Before this year, NAV looks mostly flat. Yes, the average was 5% growth a year, but that is largely the impact of the growth over the last year. However, flat NAV isn't bad. It means the distribution was likely being covered. It just isn't as good as growing NAV.

Using the average NAV over the last 3 years, I calculate that the yield on NAV (total for the 3 years, not an annualized number) is 24.86% or an average of 8.29% per year. That is well below the total NAV return of 49.31% or the CAGR of 14.25%. This indicates that the distribution was covered.

I next like to look at the 10-year history of the fund's NAV. I am generally looking for trends and signed that the fund is not maintaining NAV.

I am not sure I like what this graph shows. Sure, over the whole 10 year period NAV is basically flat. But a large part of that is because the fund has done so well in the last year. Without that, the trend would look more like a long-term erosion of the NAV. Let's look at the distribution history. 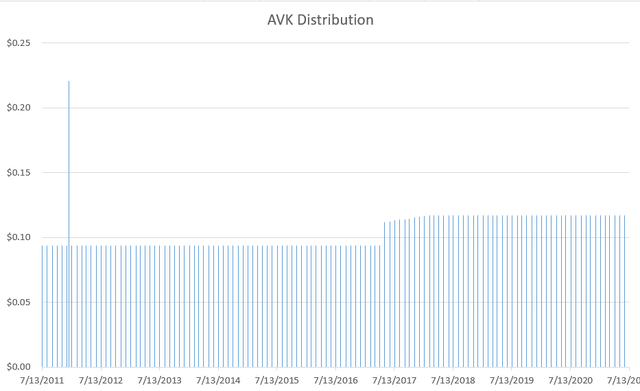 Looking at the distribution history and comparing it to how the NAV performed, I like things a bit better. First, over the last 10 years, the distribution has been maintained or increased with no cuts. That is a good sign. And comparing NAV to the when the distribution was increased, while NAV dipped a bit, it fairly quickly recovered. And outside of the COVID crash, NAV has been flat or increasing since that time. Given that, it looks to me like management is doing a decent job of managing the portfolio and paying out a distribution that is covered.

Looking at the past is informative, but for investors, it is useful only in helping predict future performance. AVK has been covering its distribution. Since it is easier to continue to do something than to change, I will look at its holding mostly for red flags. Red flags will be assets that are likely to do poorer in the future than they have done in the past.

Looking at the asset classes it holds, given its name, it is unsurprising that about 60% of the portfolio is composed of convertible securities, both bonds and preferred shares. And in keeping with the income name, another 25% of the portfolio is in regular U.S. corporate bonds. While convertible securities are pretty hot right now, I don't see any big risks in the immediate future as many of the companies issuing them have pretty good growth potential over the next few years. 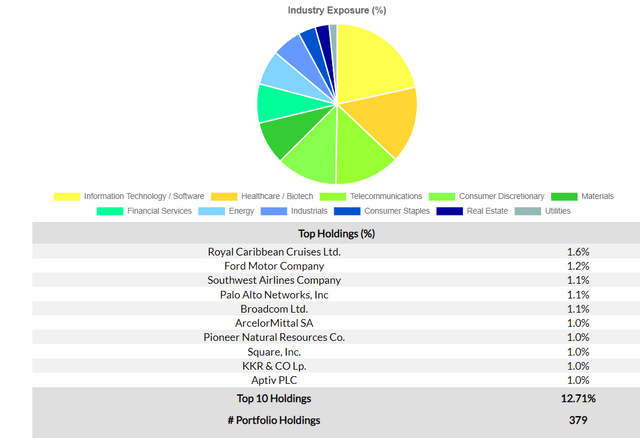 I very much like that about half the portfolio is dedicated to IT, healthcare, and telecommunications. I see all 3 as fairly big growth areas. I also like the 9% exposure to materials as I think higher inflation will make that sector a good investment over the next couple of years. I am not worried about the 7% exposure to energy. That sector has lagged the market for some time, but I don't think it will do any worse and there is always the chance that with increasing oil prices it will do better.

I might be a bit concerned about the largest holding Royal Caribbean Cruises (RCL) if they hadn't done so poorly over the last year. As COVID restrictions are further reduced there is solid potential here. Southwest Airlines (LUV) and Ford (F) are in a similar boat.

Back in 2018, AVK merged with 2 sister funds. However, in the NAV and the distribution, I don't see a big impact.

While AVK is looking good over the last year surging to the top of its peer group in returns (both market price and NAV), it has been in the lower half of its peers and below average in returns for both the last 10 and last 5 years. I own Calamos Dynamic Convertible and Income Fund (CCD) which handily beat AVK in 5-year returns (CCD is a more recent fund and wasn't around 10 years ago). It also has a slightly higher yield.

I like the convertible securities sector and think it will perform well over the next few years. Since AVK is in that sector, it should do well. However, outside of the last 12 months or so, its distribution coverage is less than I'd like. I own CCD and I continue to think that is a better choice to invest in this sector. 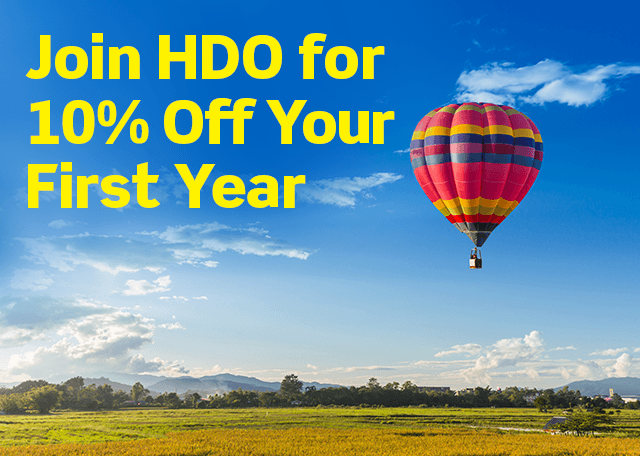 You don't need luck to see success, but being part of the largest and most exciting community of income investors and retirees vastly improves your chances. Our Income Method generates strong returns, regardless of market volatility, making retirement investing simple, straightforward, and less stressful!

Invest with the Best! Join us for instant access to our model portfolio targeting +9% yield, our bond and preferred stock portfolio, and income tracking tools. Don't miss out on the Power of Dividends! Start your free two-week trial today!

Beginning on October of 2018 I began working with Rida Morwa and his team at HDO. I both write articles in collaboration with the HDO team and on my own. Contributing authors, if any, will be listed after the bullet points at the start of articles.

My profile picture is an actual picture of me and 4 of my siblings from 1971. I am 9, and the one in the greenish shirt saluting (to keep the sun out of my eyes). My siblings are 8 (brother at far right), 7 (blond sister), 6 (sister in the red shirt) and 3. My grandfather is holding my youngest brother. In this picture, my grandfather is about 4 years older than I currently am.

I have been a software engineer developing applications in various fields for over 30 years. I began investing in mutual funds for my 401(k) back in 1988.I started investing outside of my retirement account a little over 17 years ago. I used to follow a value oriented strategy, but after I saw how that worked less well than I liked during the financial crisis, I began to switch over to a more income based approach.

I had always thought that dividends were important but didn't have a systematic way to evaluate stocks that paid them until I found SA and DGI. Starting around 2010, I have switched my portfolio to a DGI strategy.
One of my most profitable picks turned out to be Freddie Mac, which I originally chose because I liked the dividend and because I once worked there. When it first ran into problems I increased my holdings because it still looked like a good value to me. I eventually managed to buy several thousand shares at a cost of $0.50 (I knew that was a good value) and eventually exited the stock at a price that was $5 a share above my average share cost.
My biggest miss was when I sold out my 100 shares of Apple shortly after Steve Jobs returned but before he had done much to improve the companies outlook. You can see my holdings here :

Disclosure: I/we have a beneficial long position in the shares of CCD either through stock ownership, options, or other derivatives. I wrote this article myself, and it expresses my own opinions. I am not receiving compensation for it (other than from Seeking Alpha). I have no business relationship with any company whose stock is mentioned in this article.