After muddling around for about two weeks, the U.S. stock market hit new historical highs at the markets closed on Friday evening.

After all the new historical highs before Tuesday, July 13, the markets took a period to discuss, debate, and discern. The period since the twelfth, has seen some downs, including some fairly dramatic declines on Monday, July 19, but, has generally been moving around trying to digest the data of the previous month or two.

But, the following days were somewhat hazy with all the noise that was going on about inflation, about the growth of the economy, and about what the Federal Reserve was about to do.

Today, Friday, July 23, it seems as if, for the time being, investors have put several ideas together and this has given some direction to the markets.

The direction is up.

Here is the picture of the week. 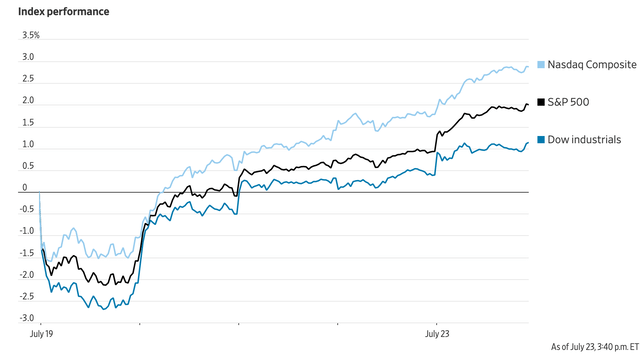 I am going to draw two conclusions from the performance of the stock market this week.

For example, on Friday IHS Markit reported that business activity continued to expand in July in the private sector.

Furthermore, the index relating to the activity of U.S. manufacturing purchasing managers rose to a new level in July.

More specifically, the data showed that there has been a quick rise in new orders as new customers increased their spending and, in addition, production rose at a faster pace than had been expected.

Also, third quarter profits continue to be encouraging and meet or exceed expectations.

So, in general, the news from the week generally point to a stronger economic recovery one that seems to have some depth as well as breadth.

Over the past week or so, investors had shown substantial concern overt the fast-spreading Delta variant of the Covid strain. Some investors saw another reason that there might be huge lockdowns in Europe and possible the United States, moves that would restrict growth or even just take the shine off of the pending recovery.

So, generally, from the economic side, good news.

From the Federal Reserve Side

The second factor associated with the current movement in the stock market has to do with the Federal Reserve.

For the time being, I believe that the investment community has made a decision about the Fed and the stock market, and the decision, it seems to me, is a positive one for the stock market.

I have written about this in a recent post.

The Federal Reserve has been concerned about inflation and the recent statistics showing that inflation might be increasing. But, Fed Chairman Jerome Powell and his colleagues contend that the inflation numbers that have been released are impacted by temporary factors that will soon disappear.

Thus, the leaders at the Fed are saying that they do not need to back off from their current aggressive buying of securities and can continue to until they see data that warrant a change in their policy stance.

The thing that has not been discussed is the fact that the Fed has sold over $1.0 trillion of securities, since early February, all under an agreement to repurchase them in the near-term future.

The reason seems to be that all the money that was being injected into the banking system was causing short-term interest rates, especially the Fed's policy rate, the Federal Funds rate, to fall, possibility falling into negative territory.

The Federal Reserve does not want negative short-term rates of interest and so has been fighting this pressure by selling securities, but under an agreement to repurchase them within a short period of time.

The way out of this selling exercise is for the economy to get stronger, which would bring pressure on banks to increase loans, which would cause short-term interest rates to rise and the Fed could then let the reverse "repos" run off without disrupting the banking system or the financial markets.

It seems to me that investors see this possibility taking place and have, in the process, gained confidence in the Fed.

The market confirmation? The value of the U.S. dollar has gotten stronger this past week or so.

Where Is The U.S. Dollar Going?

At the close of business on Friday, it took almost $1.1900 to acquire one euro.

So, the U.S. dollar has strengthened over the past two weeks. The major thing making the dollar move is the investor confidence in what the Federal Reserve now seems to be doing. Before, the week or so, the value of the dollar had been declining as the debate over inflation and the Fed's response to the inflation dominated the news links.

Today, there is some confidence in the Fed that was not there three weeks ago.

So, we have seen quite a shift taking place, one that, right now says, we support what Jerome Powell and the Fed are trying to do.

So what does this mean for the future?

Short-term, it means some fundamental support for the stock markets and the possibility of further increases in stock prices.

Well, as I have argued over and over again, we are in a period of radical uncertainty. The future is clouded by a lot of unknowns.

A lot is riding on what happens in the economy over the next six- to nine months. Jerome Powell and the Fed are claiming nothing more. Their whole story hangs on their picture of the current load of statistics capturing just temporary events. They won't claim any insight beyond a possible year.

John M. Mason
15.84K Followers
John M. Mason writes on current monetary and financial events. He is the founder and CEO of New Finance, LLC. Dr. Mason has been President and CEO of two publicly traded financial institutions and the executive vice president and CFO of a third. He has also served as a special assistant to the secretary of the Department of Housing and Urban Development in Washington, D. C. and as a senior economist within the Federal Reserve System. He formerly was on the faculty of the Finance Department, Wharton School, the University of Pennsylvania and was a professor at Penn State University and taught in both the Management Division and the Engineering Division. Dr. Mason has served on the boards of venture capital funds and other private equity funds. He has worked with young entrepreneurs, especially within the urban environment, starting or running companies primarily connected with Information Technology.