The most valuable company in the world is about to report fiscal third quarter results. Riding a number of tailwinds that range from the 5G cycle to a pandemic-driven change in consumer habits, Apple (NASDAQ:AAPL) will have the challenge of impressing investors against (1) comps that start to get tough this quarter and (2) a stock that has rallied ahead of earnings season.

For reference, Wall Street expects revenues to land 23% above last year's levels – the second-highest top-line growth rate in the past five years at least, probably much longer. EPS of $1.01, if achieved, would represent a whopping 55%-plus increase YoY.

This is probably the last quarter for which analysts will not have a full set of guidance from the management team. Last quarter, CFO Luca Maestri provided a fiscal Q3 outlook on several key metrics, from gross margin to tax rate and dividends. But regarding revenues, he summarized his projections as follows:

We expect our June quarter revenue to grow strong double digits year-over-year. However, we believe that the sequential revenue decline from the March quarter to the June quarter will be greater than in prior years.

It's the uncertainty, driven primarily by (1) the odd timing of the iPhone 12 launch last year and (2) the supply chain constraints caused by the recovery from the COVID-19 crisis, that makes it hard to pin down the revenue and earnings number in fiscal Q3. Case in point, the range in analysts' revenue projections is very wide: From a low of $65.7 billion to a high of $77.5 billion (YoY growth of 10% to 30%).

Even the tea leaves don't seem to help much this time. On one hand, analysts have been revising their estimates higher in the past few weeks. Not only have the bulls been saying that a solid quarter is in the works, even the less enthusiastic analysts, like Credit Suisse's Matthew Cabral, seem to have set their expectations high.

But on the other hand, recent data on global shipments of smartphones, personal computers and devices sold in China paint a different picture: 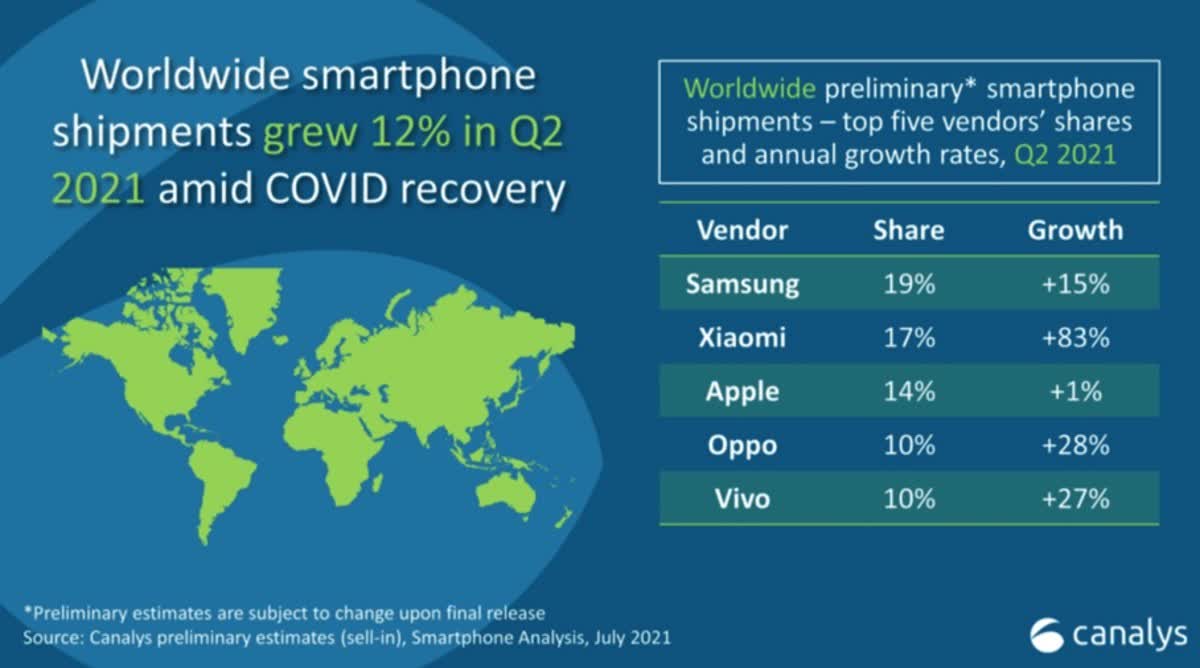 To be fair, the results of the most recent period may not be the most important catalyst for Apple's share price on earnings day. I believe the focus of attention will be on (1) the narrative around the component shortage, and how it could impact the release of the next iPhone in the fall, and (2) whether the slow unwind of the pandemic and the tough comps ahead may lead to more modest fiscal Q4 guidance.

Regarding the thesis on AAPL, I believe that traders and investors are faced with a different set of questions to answer. Were I the former, I would probably be a bit concerned about the recent rally in share price. Historically (see chart below, using data from the past 20 quarters), Apple tends to rise about 1% in the two weeks leading to earnings day and nearly 5% in the two weeks after it. But in the past month alone, the stock has already climbed 11%, arguably front-loading any potential earnings-driven price appreciation.

However, I am much less concerned about day-to-day or week-to-week movements in the stock price. When it comes to Apple, I believe that the best strategy is to own it for the long term, eventually taking advantage of price dips to increase the size of the position.

My bullish stance on AAPL is based primarily on the following factors:

In the end, I would not dare take guesses on how strong or soft Apple's fiscal Q3 might be. But should the bearish thesis be confirmed and the stock takes a post-earnings hit, I believe that the pullback would be an opportunity for investors to buy this great stock on weakness.

Members of my Storm-Resistant Growth community will continue to get updates on AAPL (allocation updates, insights, etc.) and the performance of my market-beating "All-Equities SRG" portfolio on a regular basis. To dig deeper into how I have built a risk-diversified strategy designed and back-tested to generate market-like returns with lower risk, join my Storm-Resistant Growth group. Take advantage of the 14-day free trial, read all the content written to date and get immediate access to the community.