The Simplify US Equity PLUS Downside Convexity ETF (NYSEARCA:SPD) invests in the S&P 500, and buys cheap OTM put options for downside protection.

SPD's returns will mostly track those of the S&P 500, with some important differences:

Although the fund seems like a reasonable choice for investors wishing to profit from extreme downturns, I'm not sure that this is a common or worthwhile goal. Downside protection during smaller downturns seems sorely lacking.

SPD might make sense for investors looking to profit from extreme, and only extreme, downturns, while achieving market-average returns otherwise.

I also went through other hedge ETFs here.

So, SPD is mostly a simple S&P 500 equity index fund. SPD's long-term returns will closely track those of the S&P 500. This has been the case since the fund's inception in late 2020.

SPD invests 2% of its assets in S&P 500 put options. These options are all that differentiate SPD from the average S&P 500 equity index fund.

These same options give the fund the right, but not the obligation, to sell shares of the S&P 500 index for around 50% of its current price at a later date. Profitability depends on equity prices.

If equity prices go down by 50% or more, then the options can be profitably exercised. This is done by buying shares in the S&P 500, whose price just collapsed, and selling them for the predetermined strike price, which is higher than the (now collapsed) price. Lower prices means higher profits.

Let's have a quick look at how the above might look in practice.

Here is how to interpret the above.

SPD has bought several different put options, all with slightly different characteristics, but they are all quite similar to the one above.

The S&P 500 has not come even close to $200 per share since SPD's inception, and so I can't really show how the fund would react under said conditions. Nevertheless, I was able to (very roughly) estimate some figures using fund data.

As can be seen above, SPD should significantly outperform if equity prices drop by more than 50%. In practice, I expect outperformance to be even higher than above, as SPD would be able to sell its (now expensive) options for (cheap) S&P 500 shares, turbocharging returns further.

If equity prices go up or move sideways, then the options should expire worthless. Underperformance should equal 2%, equivalent to option premiums / investment (i.e., you lose the money invested in the options - 2%). Since SPD's inception, in late 2020, equity markets have posted significant gains, and SPD has underperformed by 1.8%, as expected (roughly).

If equity prices go down by less than 50%, then the options expire worthless, but there might be some (temporary) gains along this way. As an example, let's say SPY's price collapses to $211. Technically the put option above can't be profitably exercised yet, prices still need to drop to $210. In practice, if SPY's price collapses to $210, the put options should see significant gains regardless, as the options are so close to profitability. Lots of investors would be willing to buy these options, expecting strong profits as the S&P 500 continues to go down.

SPD's managers expect to monetize these options when they are worth 5% of the portfolio, roughly equivalent to 300-400% gains. Generally speaking, gains are very small when prices are down by a little, but skyrocket as losses get closer to 50%. Profits would almost certainly be realized with +40% equity market losses, almost certainly not with single-digit losses, and the situation would be quite fluid with losses in between these two extremes.

Markets have rarely been down since SPD's inception, at least not by a lot. There was a tiny, short-lived downturn in October 2020, during which the S&P 500 was down by 7.35%. SPD posted losses of 7.24%, indistinguishable from a random movement. 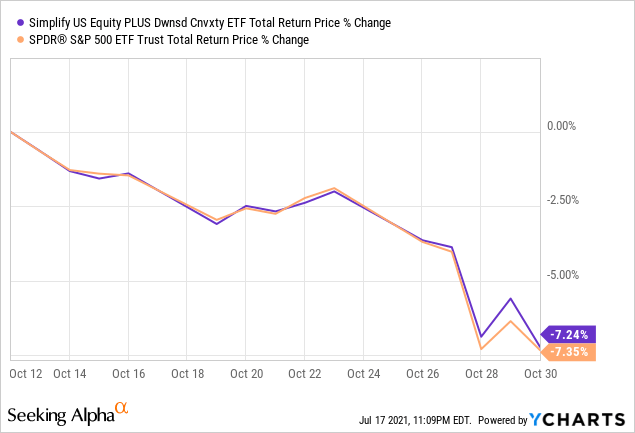 Greater losses would have meant higher capital gains for SPD's put options, and for the fund itself and its shareholders.

Fund performance, considering both the put options and the equity holdings, looks as follows. 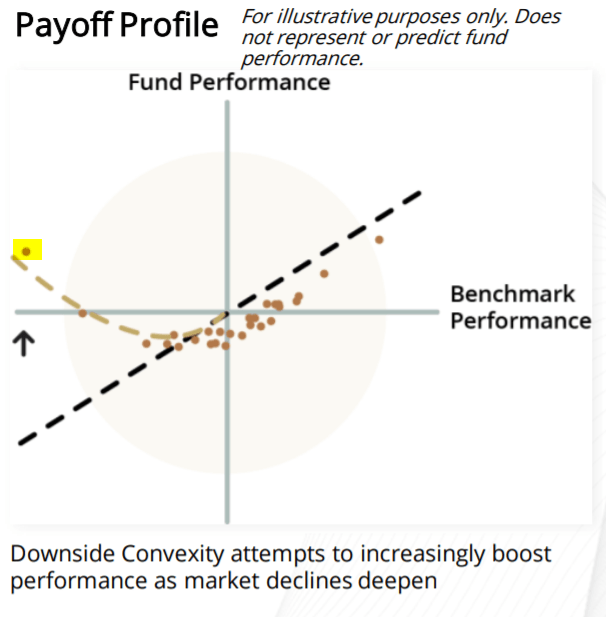 SPD underperforms when markets move up, sideways, or slightly down, by about 2% per year.

SPD matches the performance of the S&P 500 when markets are moderately down, think 10%.

SPD significantly outperforms when markets are massively down, think 50% or more.

Although the above is definitely a benefit, I simply don't think it is a particularly important or compelling benefit. SPD would only outperform during the most extreme downturns, and these are simply not all that common. Even during early 2020, the onset of the coronavirus pandemic, the S&P 500 was 'only' down 30%, and soon recovered some of these losses. 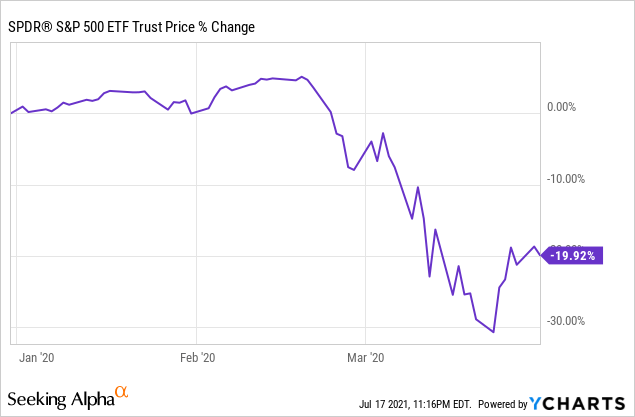 As mentioned previously, I just don't find this to be a compelling investment thesis. Investors are paying 2% in annual expenses for protection against extremely rare events, with little protection against more common downturns and recessions.

As an alternative to SPD, we have the TrueShares Structured Outcome ETFs, covered here. These offer investors stronger downside protection during downturns of all sizes, but no possibility of gains during extreme downturns.

A quick table summarizing the expected performance of these ETFs.

SPD offers investors the possibility of significant gains during extreme downturns, but slightly lower returns under most other relevant market conditions.

Additional disclosure: This article was originally published to members of the CEF/ETF Income Laboratory on July 19th, 2021.