iShares MSCI Taiwan Capped ETF (NYSEARCA:NYSEARCA:EWT) is an exchange-traded fund that offers direct exposure to large and mid-sized Taiwanese companies. The expense ratio is 0.59%, which is acceptable in light of the fund's focused strategy. Much like other ETFs, the fund has an equity index that it seeks to replicate; in this case, that would be the MSCI Taiwan 25/50 Index.

EWT has performed well year-to-date, with a return of over 21%. This is an out-performance relative to SPDR S&P 500 ETF Trust (SPY), a popular ETF that seeks to replicate the S&P 500 index (a common benchmark for equity investors). SPY has risen by about 19% since the start of the year.

The last time I covered EWT was in February 2021, and I was bullish on the fund's prospects. However, it is worth revisiting the valuation. Firstly, I would reiterate that while historically I have thought EWT has being undervalued, it is probable that (in small or large part) this undervaluation is owing to an additional risk premium that is being priced into Taiwanese stocks because of Taiwan's frictions with China. China has been circling Taiwan with warplanes on a regular basis, and has publicly denounced Taiwan's administration's publicized opinion that it is an independent country, not part of China. China does not like this. War is a risk, although possibly still a small risk.

Still, while there have been recent conflicts between China and Hong Kong, Hong Kong equities have not crashed. They are under-performing, but notably have not led to significant capital flight. Therefore, perhaps the risk is not significant even if a significant event such as war ultimately occurs. But Taiwan is admittedly a different case, and the conflict would be even greater, likely involving Japan, the United States, and other countries. This article is not a political analysis, but we should note the risk as it is likely a good reason for any otherwise positive value discrepancy we might find.

EWT's benchmark index reports a trailing price/earnings ratio of 16.58x as of 30 July 2021, with a trailing price/book ratio of 2.16x. By dividing the latter into the former, we can impute a return on equity of just over 13%. This is not as high as, for example, the world's strongest technology companies, nor is it better than some of the world's other leaders in other sectors (or other country equity indices, for that matter). But it is much higher than slower-growth countries like Japan (whose ROE is circa 7%), or Malaysia for instance (an ETF for which I covered recently, and whose ROE is about 10%). (Note that return on equity will improve as businesses rebound post COVID.)

So, Taiwan's listed businesses are above average in terms of productivity and economic efficiency (independent of valuation). The forward price/earnings ratio for EWT's benchmark index is 13.57x, implying a forward yield of about 7.4%. This is not high, but higher than in other markets (including the United States, where the forward earnings yield is sub-5%). However, we need to consider other factors such as the country's equity risk premium and local risk-free rates, before we can judge whether the higher earnings yield is fair.

For the mature market equity risk premium (as a base), I defer to Professor Damodaran, whose current ERP recommendation is 4.31%. I then add the Taiwanese 10-year yield as the risk-free rate, of 0.38%, and additionally add 0.60% (inspired by Damodaran's previous work on country risk premiums, including for Taiwan). Perhaps we could increase the premium a little, as arguably the risk of war (or some other conflict) has increased since the start of the year when Damodaran last calculated country risk premium spreads. Nevertheless, Taiwan's local risk-free rates remain very tight, so perhaps it is fair to stick with the relatively low spread of about 0.60%.

Beyond next year's earnings (forecast provided by MSCI), I reference Morningstar consensus analyst estimates of earnings growth on a three- to five-year basis of 18.05%. I am building this into the forecasts, although I am going to assume a lower overall rate of about 12% on a five-year basis (as illustrated below), just to be more conservative. All considered, this delivers a fairly crazy level of upside of almost 100%. 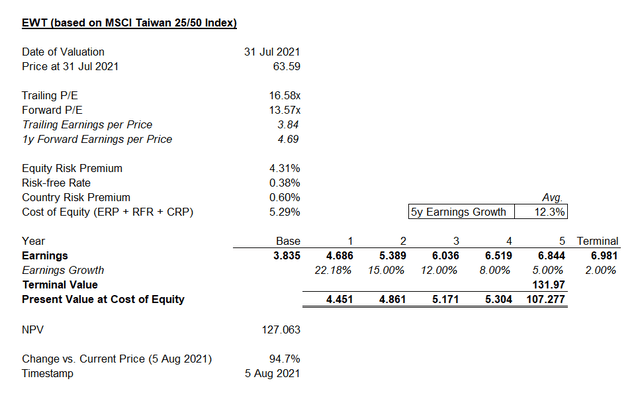 If the equity risk premium we have chosen, of 5.29% in total, is fair, then a simple arithmetic reversion from our implied forward earnings yield of 7.37% to 5.29% would bring us upside of over 39%. So, even if we don't take into account longer-term earnings growth potential, the security is likely undervalued.

Taking another approach, I used the same data but thought about a long-term model in which EWT (i.e., Taiwanese equities) slowed down after five years and reverted to a 3% annual earnings growth, with a payout ratio of at least 40% over the long haul (dividends), and thus also a slowing return on equity over time. My base-case internal rate of return (or IRR) for this 100-year model was about 7.17%, which would again indicate that EWT is likely undervalued, as this would still imply a materially higher equity risk premium than is "fair" under a base case scenario. Implied upside in this model would be over 35%.

My view is that Taiwanese equities are pricing in a significant level of political risk, and that essentially every year that passes without war, you are "collecting" this risk premium in the form of higher returns. A caveat to this is that Taiwan's return on equity isn't quite as powerful as other countries such as the United States. Still, on a valuation basis, EWT is undervalued even under using slower long-term growth assumptions. And so even if EWT's consolidated earnings power is not "fantastic", you are still looking at the potential for upside here in the long run.

I do think that my reference to "collecting" the risk premium is an important one, because with every year that passes without regional conflict, the more difficult it is likely to become for China to actually engage. Japan has already spoken up about Taiwan, and should Taiwan's neighbors (together with other countries with vested interests such as the United States) get involved, China will not really have the option of invading.

EWT also continues to include one of Taiwan's prize jewels, Taiwan Semiconductor Manufacturing Company (TSM), one of the world's leading and most technologically advanced semiconductor manufacturing companies. Semiconductors will remain in high demand for the foreseeable future, and so while this represents a very large portion of the portfolio (over 21% as of August 4, 2021), I would view this as an opportunity more than a source of concentration risk. One might argue that this particular company is one of the reasons why China is so interested in controlling Taiwan.