Alibaba (NYSE:BABA) released its second quarter earnings recently and they were pretty mixed. EPS came in higher than analyst estimates but revenue missed estimates and growth slowed. One bright spot in the earnings report was the cloud computing segment. It grew at 29%, making it the third-fastest growing of BABA's four main business segments.

That's significant because the lack of profitability of BABA's non-core businesses has always been a major component of the bearish thesis on the stock. Until this most recent quarter, none of BABA's major business segments apart from core commerce were profitable. The company itself has mostly been profitable on a full-year basis, but its powerhouse eCommerce business has been subsidizing its other three main business units. So, BABA's initiatives in cloud computing, media and innovation have been dragging down the company's profitability.

Until now. With cloud computing swinging to profitability in adjusted EBITDA terms, and with 29% sales growth, it's only a matter of time until it starts making a positive contribution to net income, cash from operations, and other key profit metrics. In this article, I will develop a bullish thesis on Alibaba, arguing that its success in cloud computing is a positive sign that the company will evolve its non-core business segments to the point where they are profitable. That development would be bullish for the business as a whole, as it would improve margins by creating new profit centers and freeing up more cash from the core commerce business.

In order to evaluate BABA's growth potential, we have to look at its competitive position in the industry it operates in. Normally this would involve looking at competing eCommerce companies like JD.com (OTCPK:JDCMF), but because this is a catalyst-specific article focused on cloud computing, it makes more sense to look at BABA's competitors in that specific space. The biggest ones include:

All of these companies vary greatly in what they offer, but they offer few key services in common:

In general, Alibaba has the edge on its cloud competitors in pricing but lags somewhat on services. That's understandable since Alibaba Cloud hasn't been around as long as the competitors mentioned in this article. As BABA's cloud computing segment grows and develops, it will add more services and gain on its competitors. If it can keep its price advantage, then it will gain market share. With that in mind, let's look at Alibaba's cloud business in detail.

The Details on Alibaba's Cloud Business

Alibaba offers a full suite of cloud computing services. In addition to the services mentioned in the previous section it also offers:

Broadly, Alibaba Cloud's core service offerings are similar to those offered by the other cloud computing giants. Where it differs is in the geographic focus. A main selling point of Alibaba's Cloud services is their ability to help vendors reach the Chinese market. Strong emphasis is put on Chinese servers, compliance and security concerns. For example, the company touts its ability to help companies comply with China's new MLPS 2.0 regulations. This focus on helping companies thrive in China is relatively unique among cloud service providers and provides an "edge" that the larger players don't have.

As we've seen, Alibaba's Cloud Computing segment is a high growth business with a unique market segment. That in itself is promising. But without proof that the cloud computing industry is strong on the whole, it doesn't mean much. To really gauge the promise of BABA's cloud computing segment, we need to look at how these segments are contributing to other large tech companies.

First, let's look at projected and historical trends in the cloud computing industry as a whole. Generally speaking, they're quite good. According to research and markets, Cloud Computing is slated to grow at 17.5% CAGR to 2025. It grew at 13.7% in 2020 despite the pandemic-caused recession at the time.

So, Cloud Computing is a dynamic industry that has historically grown rapidly and is expected to keep doing so in the future. This is borne out in the results of companies that have launched cloud computing divisions. Cloud computing has been a major driver of earnings for large tech companies--particularly Amazon and Microsoft--and looks like it will soon be delivering positive profits for Alibaba. 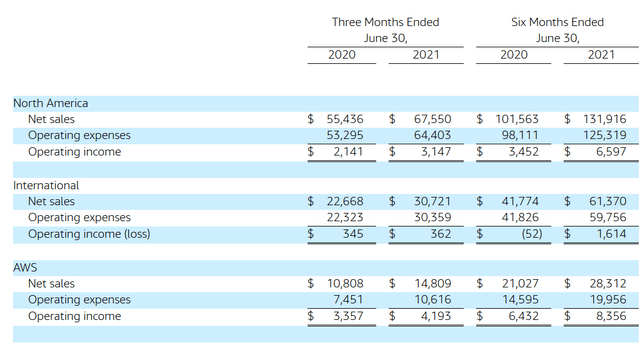 Now let's look at Microsoft. In an earnings press release titled "Microsoft Cloud Strength Fuels Fourth Quarter Results," the company released strong metrics, particularly in the Azure cloud division. The dominance of Cloud in MSFT's earnings was even more pronounced than in the case of Amazon, as it posted the highest revenue growth out of all of MSFT's business units:

In the earnings press release, Microsoft also noted that its cloud segment had a 70% gross margin, so it's profitable as well.

Google's cloud services were not profitable in the second quarter, but the loss as a percentage of revenue ((about 12%)) was low. So broadly we're seeing the U.S. tech giants doing well with their cloud computing segments. That bodes well for Alibaba, which is following a similar business model only with a China-focus that the U.S. tech firms can't match.

In the first quarter, BABA earned:

As we've seen so far, Alibaba is a fast-growing business whose non-core operations--especially Cloud Computing--are inching toward profitability. It's an organic growth story that would likely continue unimpeded if politics were not a factor.

But alas, politics are a factor. And political risk is probably the single biggest challenge for Alibaba right now.

This year, the Chinese government launched a sweeping tech crackdown that included measures such as:

It was a pretty sweeping and abrupt round of reforms. And at least some of the damage has been done: in the first quarter, BABA paid $1.4 billion of its $2.8 billion fine, resulting in weaker cash from operations than would have otherwise been the case. This move, and others like it, represent a risk that investors need to be aware of. It does not, in this author's opinion, justify the selloff observed in BABA stock this quarter--I am long the stock after all. But it's something to keep in mind.

The bottom line on Alibaba is this:

It's a large and fast-growing company with a bright future ahead of it. With the profitability corner starting to turn on Cloud Computing, we're beginning to enter an era where BABA no longer has to drain Core Commerce revenues to subsidize its other businesses. Already, we're seeing Alibaba Cloud producing positive adjusted EBITDA. As it grows, it will probably also start producing positive cash flows and operating income.

Disclosure: I/we have a beneficial long position in the shares of MSFT, BABA either through stock ownership, options, or other derivatives. I wrote this article myself, and it expresses my own opinions. I am not receiving compensation for it (other than from Seeking Alpha). I have no business relationship with any company whose stock is mentioned in this article.