Microsoft Corporation (NASDAQ:MSFT) is currently priced at ~32.8x FW PE and causes concerns for some investors. To put its valuation in perspective, this article examines the valuation from 3 different angles: dividend yield, dividend yield relative to risk-free rate, and historical PE. The results show that the valuation may be a bit high in absolute terms, but certainly not in any bubble or dangerous level. Finally, based on these examinations, an assessment of future returns will be performed.

If there is a business that needs no introduction, it is probably Microsoft. Due to its scale and presence, most of us probably have used its products or services every day. It has been one of the best performing stocks over the past many decades. Take the past decade as an example. As seen from the next chart, MSFT investors have been spectacularly rewarded through a combination of earnings growth, dividend, and valuation expansion. The stock delivered more than 1,300% of total return (assuming dividend reinvestment), more than 4x of that from the S&P 500 index.

However, it is also because of such spectacular price appreciation in recent years, the stock appears to be overvalued currently and causes some concern of its valuation. And next we examine the valuation more closely from three perspectives within three charts.

Furthermore, as we are going to see in the next chart, the valuation of MSFT expanded no faster than the decline of the interest rates.

For a bond-like equity such as MSFT that enjoys stable profitability and pays a stable dividend, a useful indicator I rely on (and fortunately with good success so far) to gauge the risks has been the yield spread, as illustrated in the following chart. This chart shows the yield spread between MSFT and the 10-year Treasury over the past decade. The yield spread is defined as the TTM dividend yield of MSFT minus the 10-year Treasury bond rate. As can be seen, the spread is bounded and tractable. The spread has been in the range between about -1.5% and 1% the majority of the time, which makes sense for a stable and mature business like MSFT.

When the spread is near or above 1%, MSFT is significantly undervalued relative to 10-year Treasury bond (i.e., I would sell Treasury bond and buy MSFT). In this case, sellers of MSFT are willing to sell it (again an equity bond with a credit quality as good as the US government and some growth built in) to me at a yield that is 1% above a risk-free bond. So it is a good bargain for me.

And when the yield spread is near or below -1.5%, it means the opposite. Now sellers are demanding such a high price that drives yield to be 1.5% BELOW the risk free yield - which begins to make less sense to me as a buyer because the risk-free Treasury bond after all is risk-free. It is backed by the government capability to print money, a capability that MSFT does not have no matter how great its business model is.

And as of this writing, the yield spread is about -0.46%. In relative terms, it is near the middle of the historical spectrum as seen.

So the valuation of MSFT simply expanded just to keep pace with the decline of interest rate. In other words, MSFT deserves its current valuation even if there is no profitability improvement at all. And in my view, MSFT's profitability HAS improved over the past decade - but that will be a separate discussion for another day. 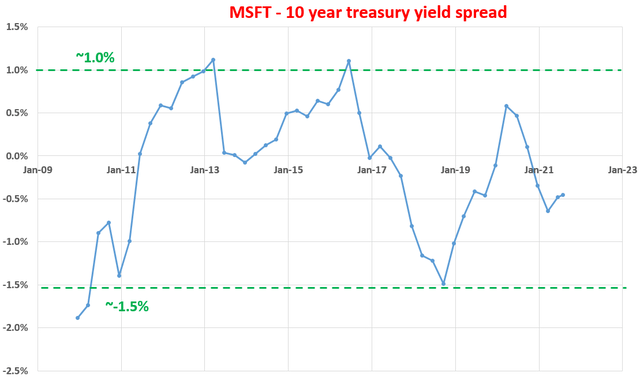 Finally, the following chart shows the annual average PE of the stock in the past decade - the valuation metric that most of us are familiar with. As seen, the PE has expanded from less than 10x to the current ~33x, an 13% expansion rate CAGR.

However, such rapid expansion rate needs to be put into perspective too. First, the less than 10x valuation at the beginning of the decade is clearly undervalued. When you start from a really low point, the growth rate is substantially distorted. 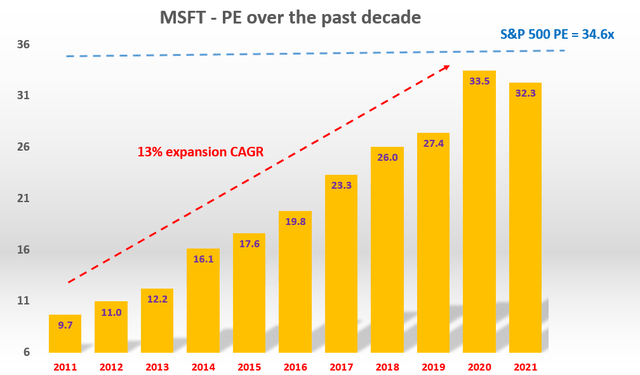 Based on the above discussions, we now estimate the potential return. MSFT is a good place to apply the discounted dividend model ("DDM") due to its relatively stable income and the consistent dividend. A key variable in the DDM model is the discount rate, and this analysis uses the Weighted Average Cost of Capital ("WACC") as the discount rate due to MSFT's relatively stable earnings and capital structure. My estimation of the WACC has been around 6% to 8% in the past decade, averaging 7%. The variation was caused by the borrowing rates, and the portion of debt in the capital structure.

With the WACC, three return projections were summarized in the next chart in this section.

Based on these considerations, a "normal" scenario projection was analyzed. And the results show a reasonable risk/return profile - both in the upward and downward direction.

Thanks for reading and look forward to your thoughts and comments!

** Disclosure: I am associated with Sensor Unlimited.

Department of Management Science and Engineering, with concentration in quantitative investment

Department of Mechanical Engineering, with concentration in  advanced and renewable energy solutions

Since 2006, have been actively analyzing stocks and the overall market, managing various portfolios and accounts and providing investment counseling to many relatives and friends.

Combined with Sensor Unlimited, we provide more than 3 decades of hands-on experience in high-tech R&D and consulting, housing market, credit market, and actual portfolio management. We monitor several asset classes for tactical opportunities. Examples include less-covered stocks ideas (such as our past holdings like CRUS and FL), the credit and REIT market, short-term and long-term bond trade opportunities, and gold-silver trade opportunities.

I also take a holistic view and watch out on aspects (both dangers and opportunities) often neglected – such as tax considerations (always a large chunk of return), fitness with the rest of holdings (no holding is good or bad until it is examined under the context of what we already hold), and allocation across asset classes.

Above all, like many SA readers and writers, I am a curious investor – I look forward to constantly learn, re-learn, and de-learn with this wonderful community.