We've been holding off on this article for a while now, but since we have no new ideas and the company has fallen 30% since our entry, it makes sense to elaborate on our thesis on GSI Technology (NASDAQ:GSIT). The story here is firstly financial, and that's that GSI generates cash on legacy businesses, so it's a venture that doesn't burn cash and has time to execute. The second point is that the technology is revolutionary in several ways, and it's not a too-good-to-be-true story. Overall, GSI is the best risk-reward in global markets for technology that we can find, a no-brainer with an obvious market proposition. Nonetheless, there are distinct and critical execution risks, which are as highlighted now as ever due to the semiconductor situation. As such, don't overdo an exposure like this.

The Appeal of the GSIT APU

I'm a data scientist. Almost all our work is with matrices, and all of machine learning is matrix operations, and it's for big data stuff like predictive recommendations (Netflix (NASDAQ:NFLX) and Amazon (NASDAQ:AMZN)) and other search processes. All you need to know about matrices is that, in practice, they contain massive amounts of data, and doing basic but fundamental operations with them, required in all machine learning and any kind of even basic prediction, requires many interacting calculations, lots of multiplication and addition on the elements of these cells. There are many cells, and many of them actually empty, since the data you get is often yes/no binary data. If Netflix has 200 million users, the matrix could be as large as 200 million rows, and columns for every single show or movie available on Netflix, with interacting info on their category, with watched/not-watched or time-watched data in each of them. That's a big matrix. The data is contained in the memory, and the computing is done elsewhere where it is usually required to transport the data there in order to work with it.

GSI's patented Gemini APU allows these calculations to be done 'in place', on matrices in the memory without having to transport that data first. This makes it multiples faster than anything that even the best designs by Nvidia (NASDAQ:NVDA), Intel (NASDAQ:INTC), AMD (NASDAQ:AMD) or you name it can do, which utilizes at best some cleverly placed caches to make things work better. These caches pose a serious security risk by the way, due to predictive computing protocols that allow for unauthorised access of protected data that can be periodically stored in the caches.

You don't want to be moving data through these caches, especially when most of the data like in the Netflix matrix are just empty cells indicating 'not-watched'. Moving these large sparse matrices around is a huge waste of time and energy. The Gemini has proven to be above these cache-based systems on multiple occasions, and solves these particularly acute problems for many predictive analytics processes upon which the biggest tech giants rely. Amazon has already signaled interest in the Gemini when it comes out of the prototype and into the production phase. There are risks here and we'll get to that.

Why GSI Has This Tech

How has a little small-cap like GSI gotten a hold of this? Well, through an acquisition of an Israeli tech company MikaMonu. The acquisition may have seemed cheap for such great technology, perhaps raising your eyebrows, but the reality is it wasn't. The business may have seemed cheap, but a very valuable and long-term earnout 'option' has been given to the former shareholders in addition to the buyout of the company. The acquisition of the company and its technology, which is really all they acquired, could cost GSI a maximum of about $41 million including the acquisition consideration. These also depend in part on Dr. Akerib, who came up with the idea behind the APU patent, continuing to be employed by GSIT. That's a fair bit to pay for a company that had only a patent essentially and around $6 million will have been paid regardless of whether GSIT successfully executes.

The great thing about GSI is that it is generating cash from its legacy chip businesses. Those are in structural decline, but they finance R&D for the Gemini APU to reach production phase. 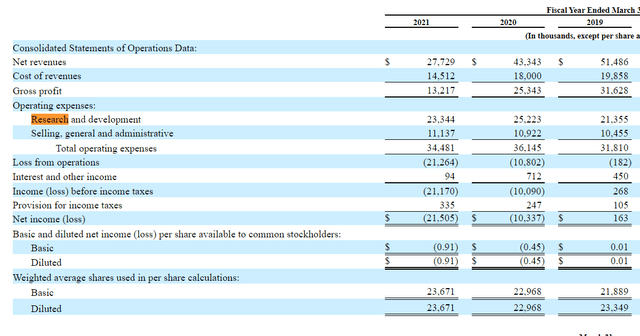 If you dialed back all the R&D, it would be a business with a 10% operating margin on its cash cow SRAM businesses. Of course, we want them spending on R&D, but the fact that the chip business generates cash means that the GSIT option gets extended. Finance 101 is of course that a longer option is more valuable.

The problem is that there are factors that might decrease the life of the option. The semiconductor under-capacity could be a problem if it remains protracted. When the Gemini comes to the commercial stage, it'll need to be able to deliver on big orders. Competing against other major chip designers will be a tough position to be in, and configuring the foundries for the APU might be an effort that will not be rapidly made. All this hampers execution and gives more time to competitors to encroach and make a lot of noise for small-fish GSIT, thus it's a risk to the option value.

Despite the semiconductor manufacturing issues, which should hopefully resolve in at most a couple of years time, there is clearly a great option here, where the APU can tackle a very attractive cross-section of the big-data push. Moreover, there could be security benefits to a cache-less APU, as per the Specter and Meltdown hacks. What's better is that this venture is as self-financing as it could possibly be. With businesses with great narratives like GSIT's, capable of trading in the billions, a stock at $125 million could have multiples in upside. Trying to value the GSI option would be farcical, but it's easy to see that if this goes well, it'll go very well, and there's the best possible set of financial circumstances to conduce that to happen. While attractive, it is still binary and speculative, and thus exposure should be very limited, although nonetheless compelling.

Valkyrie Trading Society
2.66K Followers
Author of The Value Lab
A long-only voice with eclipsing growth through 2020 and 2022 bear markets.

Disclosure: I/we have a beneficial long position in the shares of GSIT either through stock ownership, options, or other derivatives. I wrote this article myself, and it expresses my own opinions. I am not receiving compensation for it (other than from Seeking Alpha). I have no business relationship with any company whose stock is mentioned in this article.