Silver's dramatic selloff last week has taken the metal to its most undervalued level relative to a basket of gold and the commodity complex since the bull market began in 2001. Silver's recent weakness places the metal over 30% below its fair value explained by gold and the commodity complex, a similar level of undervaluation as we saw at the March 2020 major market bottom. With this in mind, the iShares Silver Trust ETF (NYSEARCA:SLV) should benefit from a significant tailwind over the coming months. It would likely take a significant about-turn in Fed and Treasury policy to prevent silver recovering from current depressed levels.

SLV gives investors direct exposure to silver by physically holding the metal in vaults in London and has a 12-month median tracking difference of 0.72%. The fund has an expense fee of 0.5% which is a small price to pay for the high degree of liquidity and negligible spread relative to buying physical silver. There are concerns over the redeemability of physical silver which has been reflected in SLV’s declining assets under management since the start of the year. Many investors have shifted to the Sprott Physical Silver Trust (PSLV) despite its marginally higher expense ratio. Regardless, any rally in spot silver would be almost certain to result in gains for the SLV in the near term.

Last week's silver collapse saw the metal trade just north of USD22, its lowest print since November 2020. While still up almost 100% from its March 2020 crash low, the metal is once again deeply oversold and undervalued, relative to the dollar, gold, and the Bloomberg commodity basket.

Silver has traded closely in line with the dollar over the past two years, with the metal showing an even closer correlation with the greenback than gold as the chart below shows. Last week's large silver selloff came despite only a minor decline in the dollar, which is the first sign that the metal's selloff may have been an overreaction.

Silver's recent weakness has even been outsized compared to the weakness seen in gold, and while gold has been quick to recover almost all of its losses from the August 6 payroll beat, silver is yet to see much of a recovery.

Since the silver bull market began in 2001, the metal has tracked the performance of an equally-weighted basket of gold and the Bloomberg commodity index, with an r-squared of over 0.9. This should not be surprising considering silver's role as an industrial metal as well as a monetary metal. What is surprising is that silver has weakened so significantly despite the basket of gold and commodities remaining near all-time highs. The last time we saw such a large divergence was at the very height of the March 2020 silver price crash, which leads me to believe that we are currently witnessing another significant buying opportunity in the metal. 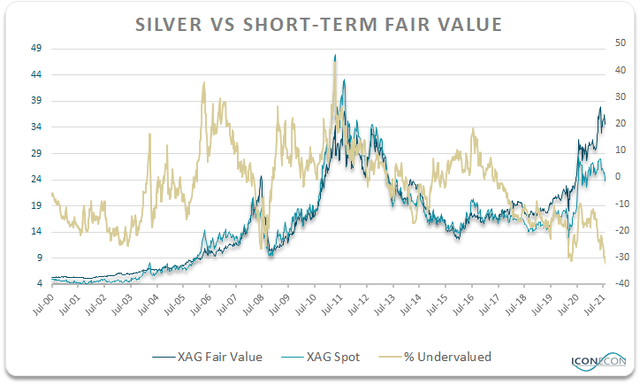 It should be noted that there is of course no guarantee that the strong correlation in the above chart remains in place, and even if it does, it could be the case that gold and the commodity complex fall back down to levels implied by the current silver price. The main reason I strongly doubt this is that the gold price itself is trading deeply below where it should based on real interest rate expectations. As the chart below shows, gold is almost 20% below its fair value level implied by the performance of inflation-linked bond yields. If gold were to continue its recovery as I expect, this would make silver even more attractive at current levels. 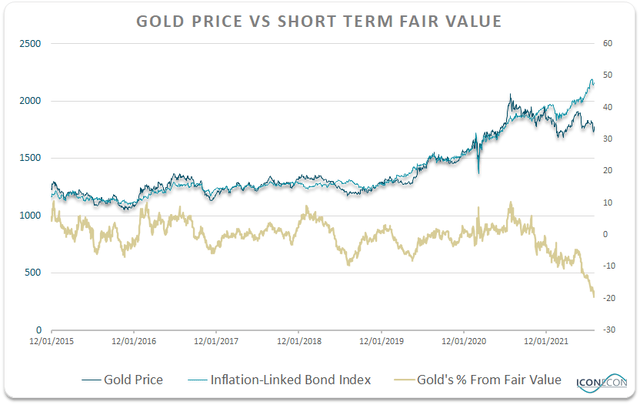 It would likely take a major shift in policy from the Fed and Treasury in order for real bond yields to rise sufficiently to undermine the case for gold. My view is that any shift towards more prudent monetary and fiscal policy will only come about once stagflation forces the hands of policymakers. In the meantime, the silver bull market is likely to remain firmly intact.

While silver has doubled in price since its March 2020 low, it is once again oversold and undervalued relative to its fundamental drivers; namely the dollar, gold, and the broader commodity complex. With the current monetary and fiscal policy mix keeping real interest rates deeply negative, the fundamental outlook for the metal remains strong. The iShares Silver Trust stands to benefit from these forces over the coming months, and I would not be surprised to see the ETF return to the upper end of its 12-month range over the remainder of 2021.

Stuart Allsopp
3.58K Followers
I am a full-time investor and owner of Icon Economics - a macro research company focussed on providing contrarian investment ideas across FX, Equities, and Fixed Income based on Austrian economic theory. Formerly Head of Financial Markets at Fitch Solutions, I have 15 years of experience investing and analysing Asian and Global markets.

Disclosure: I/we have a beneficial long position in the shares of SLV either through stock ownership, options, or other derivatives. I wrote this article myself, and it expresses my own opinions. I am not receiving compensation for it (other than from Seeking Alpha). I have no business relationship with any company whose stock is mentioned in this article.