My thesis is that Berkshire Hathaway (NYSE:BRK.A) (NYSE:BRK.B) is undervalued. CEO Warren Buffett has been taking advantage of this by buying back shares. He repurchased the equivalent of 80,998 “A” shares in 2020 which increased the ownership for existing shareholders by 5.2%. In the first half of this year, the 2Q21 10-Q cash flow statement shows $12.6 billion in buybacks which is more than the $6.7 billion they spent in the first half of 2020. In some ways CEO Buffett can be reticent in terms of vocalizing things when the stock is cheap; his buyback actions speak louder than his words.

Looking at the 2Q21 10-Q balance sheet, the first 5 lines are a big part of our valuation estimate: 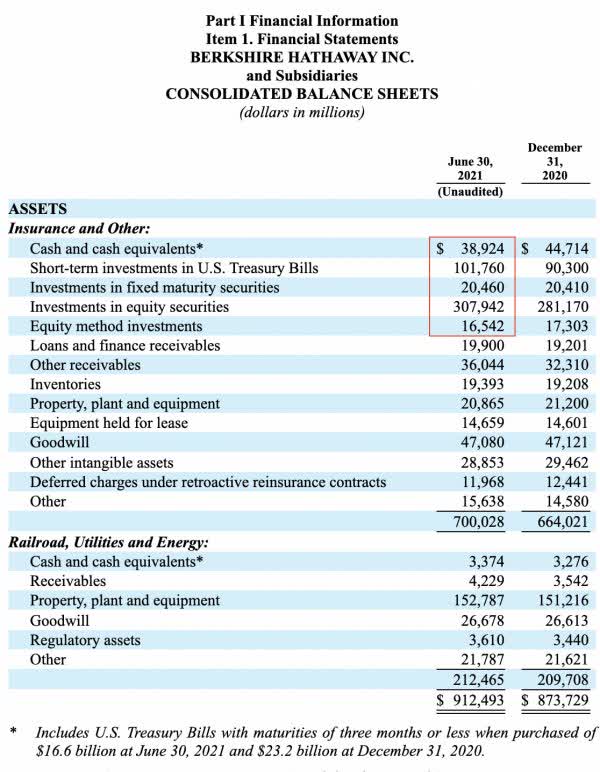 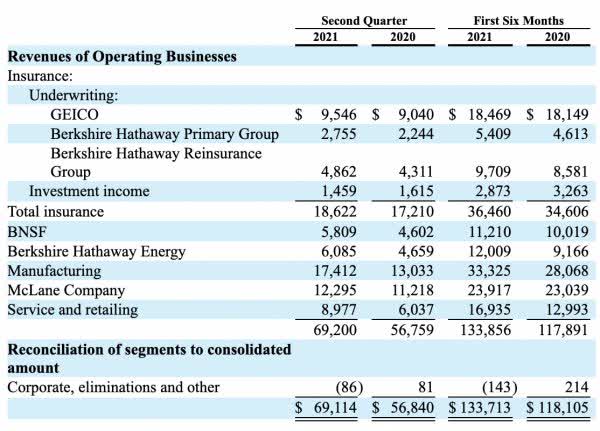 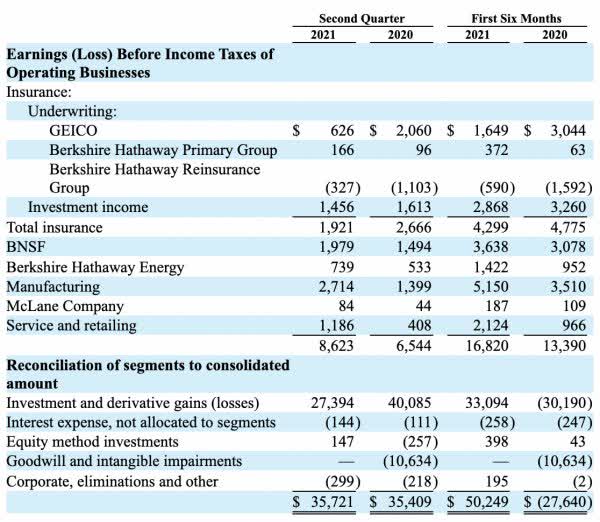 I like to use a pre-tax earnings multiple of 13 times for manufacturing, McLane and service/retailing. Their 1H21 pre-tax earnings were $5.2 billion, $0.2 billion and $2.1 billion, respectively. These numbers are a huge improvement over the first half of 2020! Summing them up and annualizing gives us $15 billion. Applying a multiple of 13 times brings us to $195 billion.

This is the sum of the first 3 lines on the balance sheet which are $38.9 billion in cash and equivalents plus $101.8 billion in T-bills plus $20.5 billion in fixed maturities.

The 5th line of the balance sheet shows $16.5 billion here. Note 5, Equity method investments, on the 2020 10-K showed that the carrying value of $13.3 billion for Kraft Heinz (KHC) on the balance sheet was $2 billion higher than the fair value of $11.3 billion. However note 5 on the 2Q21 10-Q shows that the fair value went up to the same range as the carrying value so we don’t need to make any adjustments here.

Note 18, Income taxes, isn’t as detailed on the 10-Qs as on the 10-Ks. I’m sticking with the $27 billion net investment tax liability estimate used in my February 2021 article.

I treat the insurance operations and the float liability as a wash. I can see why fastidious accountants aren’t crazy about this but I don’t think it makes a huge difference to the overall valuation whether or not these are broken out separately.

Here is a more visual interpretation: 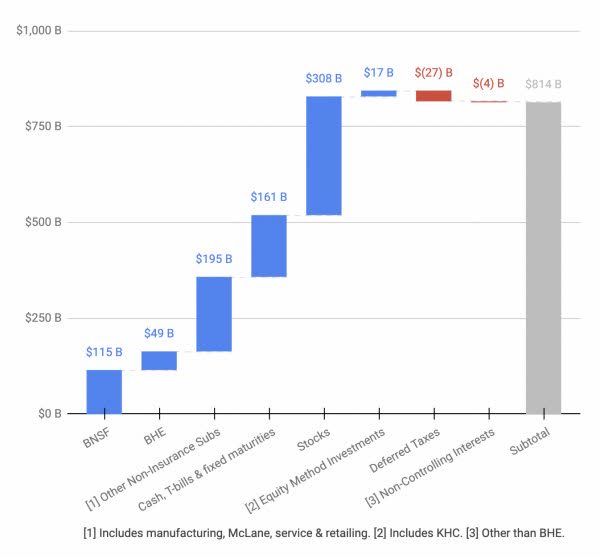 Of course the above chart is somewhere near the middle of my range. Rather than thinking about a valuation of $814 billion exactly, I think it could be approximately $50 billion higher or lower such that my range with round numbers to the nearest $5 billion is about $765 billion to $865 billion.

Given the August 23rd (BRK.A) share price of $425,000, and the 1,511,229 class A share equivalents, the implied market cap is $642 billion. Seeing as the market cap is well below my valuation range, I think the stock is priced very reasonably for long-term investors.

Some think it will be calamitous when CEO Buffett retires but he has built the company with a stable architecture that should hold up well for years to come.

Eric Sprague
3.92K Followers
I'm an individual investor heavily influenced by Warren Buffett and Charlie Munger. Munger's 1994 USC Business School Speech is something I think about a lot: ### Over the long term, it's hard for a stock to earn a much better return than the business which underlies it earns. If the business earns 6% on capital over 40 years and you hold it for that 40 years, you're not going to make much different than a 6% return—even if you originally buy it at a huge discount. Conversely, if a business earns 18% on capital over 20 or 30 years, even if you pay an expensive looking price, you'll end up with a fine result. ... Another very simple effect I very seldom see discussed either by investment managers or anybody else is the effect of taxes. If you're going to buy something which compounds for 30 years at 15% per annum and you pay one 35% tax at the very end, the way that works out is that after taxes, you keep 13.3% per annum. In contrast, if you bought the same investment, but had to pay taxes every year of 35% out of the 15% that you earned, then your return would be 15% minus 35% of 15%—or only 9.75% per year compounded. So the difference there is over 3.5%. And what 3.5% does to the numbers over long holding periods like 30 years is truly eye-opening. If you sit back for long, long stretches in great companies, you can get a huge edge from nothing but the way that income taxes work. ### Feel free to follow me on twitter: https://twitter.com/ftreric

Disclosure: I/we have a beneficial long position in the shares of BRK.A, BRK.B, UNP, VOO either through stock ownership, options, or other derivatives. I wrote this article myself, and it expresses my own opinions. I am not receiving compensation for it (other than from Seeking Alpha). I have no business relationship with any company whose stock is mentioned in this article.

Additional disclosure: Disclaimer: Any material in this article should not be relied on as a formal investment recommendation. Never buy a stock without doing your own thorough research.